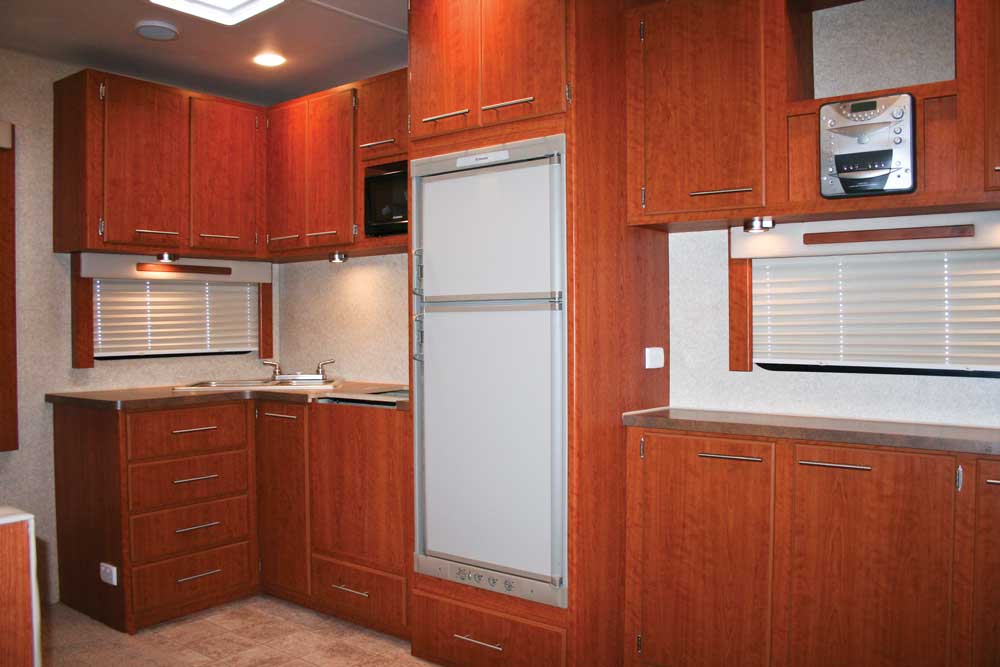 High fuel prices and the skyscraping cost of 3/4– and 1-ton pickups have created a growing demand for lightweight, easier-to-tow RVs. But not everyone wants a little trailer, which has led many RV builders to focus on smaller and lightweight fifth-wheels now more than ever. And the consumer stands to benefit from that trend. However, while many half-ton towable fifth-wheels might be smaller, that doesn’t mean they aren’t spacious and filled with great features; many offer niceties such as solid-surface countertops, leveling jacks and electric awnings. And almost every brand has a fifth-wheel designed for half-ton pickups that offers a slideout to expand the living space. Some even have two or three.

Keystone’s Laredo Super Lite fifth-wheel line is a perfect example. The series tops out at 31 feet in length with a dry weight of 7,735 pounds, yet is available in two double-slide floorplans. ‘‘These fifth-wheels are extremely well-equipped, attractive, offer great value and, of course, are towable by properly equipped half-ton trucks,’’ explains Jim Mac, Keystone’s communications manager.

Having made a name for itself in the travel trailer and truck camper markets, Livin’ Lite Recreational Vehicles entered the fifth-wheel segment for the 2013 model year with the Mercury, an aluminum-and-composite fiver that will initially feature two 24-foot floorplans with dry weights of less than 4,500 pounds. ‘‘We expect the Mercury to prove to be something that changes the market a little bit in the true ultralight fifth-wheel category,’’ says Livin’ Lite President Scott Tuttle.

Mark Lucas, president of Forest River’s Shasta division, says the company’s new 100-inch wide-body Phoenix fifth-wheel in lengths of 27 to 34 feet is intended to deliver more livability in a smaller RV. ‘‘It’s more cost-effective for the consumer, easier to tow and easier to park and they give up nothing,’’ Lucas said.

More and more builders are coming to market with a half-ton towable fifth-wheel that offers many of the conveniences, features and luxuries of the larger, heavier fivers. Here’s a guide
to get you started.

The compact Axiom lightweight fifth-wheel built by Forks RV is aimed primarily at the Australian market, but is available through select dealers in the United States. The 71/2-foot-wide mid-profile Axiom is offered in four 23- to 27-foot floorplans, each with a single sofa/dinette slideout. With a dry weight of 6,500 pounds, the aluminum-and-laminated fiberglass Axiom features an aerodynamic front cap, composite cabinets, LED lighting inside and out, thermopane windows and linoleum floors in the living area with carpeting in the upper deck — which is equipped with a queen bed. Base MSRP starts at $42,000.

CrossRoads RV has added a double-slideout 30-foot lightweight fifth-wheel to its 2013 Cruiser Aire lineup. The Cruiser Aire fiver, from this subsidiary of Thor Industries, has a walk-through queen-size bedroom with a 6-foot 6-inch ceiling. Five other fifth-wheel floorplans in lengths of 25 to 30 feet will also be available. The Cruiser Aire fiberglass-and-aluminum debut floorplan, with a 7,000-pound dry weight, is equipped with electric jacks, a 15,000-Btu air conditioner, 8-cubic-foot refrigerator, maple cabinets, 54-by-27-inch shower with a glass door and a midway island kitchen with a large amount of Formica countertop space. Base MSRP: $29,995.

Made entirely of hand-laid fiberglass in a two-piece mold, the lightweight, aerodynamic Escape 5.0 from Escape Trailer weighs approximately 2,650 pounds (dry) and offers a low center of gravity for increased road stability and a 3,500-pound-capacity independent suspension axle for reduced vibration and better handling while towing. Standards such as 15-inch tires (including the spare), LED marker lights, a 10-foot Fiesta awning and dual 5-gallon LP-gas cylinders dress up the exterior of this 19-foot 6-inch fifth-wheel. Its compact kitchen still boasts a 4.3-cubic-foot three-way Dometic refrigerator, two-burner cooktop with power range hood, optional microwave and a countertop and sink roomy enough to get the job done. The fifth-wheel has a gross vehicle weight rating (GVWR) of 4,400 pounds, making it easily towed by half-ton pickups such as a GMC Sierra or Toyota Tundra, and even by some compact pickups with appropriate trailer weight ratings and proper equipment. Base MSRP: $27,000.

Two new rear-living-room floorplans have been added to Heartland Recreational Vehicles’ Elkridge Express fifth-wheel series for 2013. The 30-foot E27 and 31-foot E28 floorplans each have a single slideout and are among seven that the manufacturer is building for the new model year. With dry weights ranging from 7,205 to 9,250 pounds, the Elkridge Express is constructed with laminated fiberglass side walls on an aluminum frame and has an 88-degree turning angle. Features include heated storage with slam-lock doors, kingpin box covers, outside showers, Beauflor floors, solid-surface countertops, cherry cabinets with hidden hinges, 60-by-74-inch queen beds, full wardrobes, sofa air beds, porcelain toilets, dinette chairs with hidden storage and multiview TV centers. Base MSRP starts at about $24,000.

Dry weights range from 5,975 to 7,135 pounds in the Jayco Eagle HT line, with four available floorplans for 2013. Offered in 26- to 32-foot layouts, three have wardrobe slideouts to complement the living-room slide. The unusual Eagle HT 23.5RBS has a large rear bath with tub and shower to allow for more bedroom space in the upper deck. A standard Glacier Package includes an R-29 insulation value in the main floor and R-27 in the roof in addition to triple insulation in the heated-and-enclosed underbelly. Countertops are solid-
surface and cabinets have solid hardwood doors with screwed stiles. Base MSRPs begin at $30,586.

A tri-level rear-kitchen floorplan has been added for 2013 to the newly redesigned Durango from KZRV. The unique 37-foot double-slideout floorplan, built on a bi-level drop-frame, features a new front cap designed to allow a greater turning radius, and has a side-aisle (streetside) front bath with a porcelain toilet, large neo-angle shower and linen closet. The 331RK queen-bed floorplan — one of 12 offered in the Durango series — has a dry weight of 9,740 pounds and is equipped with 110 cubic feet of storage under the kitchen, an 8-cubic-foot refrigerator with wood insert panel, solid-surface countertops, kitchen table with four chairs, Beauflor linoleum, slam-latch baggage doors, an L-shaped sofa bed and a 32-inch LCD TV. MSRP: $49,999.

Livin’ Lite Recreational Vehicles, known for its lightweight all-aluminum folding camping trailers and truck campers, has introduced the Mercury fifth-wheel. Livin’ Lite’s Mercury will have two 24-foot aluminum-and-composite floorplans, each equipped with a single slideout. Both are designed for half-ton pickups with GVWRs in the 3,500- to 4,500-pound range. One floorplan features double bunks in the upper bedroom,  while the second will be equipped with a queen bed. Both will have dry baths with LP-gas stoves, refrigerators and water heaters. The interior is available in a wood-look Azdell composite or champagne aluminum. Base MSRP: $26,000.

Northwood Manufacturing has given its Fox Mountain lightweight fifth-wheel a facelift for 2013. The redesigned Fox Mountain now has tan side walls, an aerodynamic mocha front cap and a more contemporary interior with stainless-steel appliances. Built on a cambered chassis, the fiberglass-and-aluminum Fox Mountain is available in six 26- to 32-foot floorplans with up to three slideouts. With a dry weight of 7,500 pounds in the 28-foot double-slide model, a standard Four Seasons package includes heated-and-enclosed underbellies, R-7 insulation in the side walls and floor, and R-18 in the roof. Features include solid-surface countertops, Beauflor floors, centrally located control panels, exterior showers and electric awnings. A combination sofa/dinette with leatherlike fabric is optional. Base MSRPs begin at $32,500.

Forest River’s Shasta Recreation Vehicle division has introduced the mid-profile Shasta Phoenix wide-body fifth-wheel with a distinctive exterior and a kingpin that can be adjusted to accommodate 51/2-foot-pickup beds. Available in eight floorplans with up to four slideouts, the Phoenix is 100 inches wide and available in eight 27- to 34-foot floorplans, all with 6 feet 4 inches of headroom in the upper deck bedroom. The gray hung fiberglass side wall on a six-side aluminum superstructure is connected to the root-beer-colored front cap. Bamboo rattan accents in the cabinets and on the slide fascia, along with Beauflor wood-plank floors, give the Phoenix a lighter interior. Dry weights begin at 7,400 pounds. Base MSRPs start at $30,000.

For those in the market for a midprofile fifth-wheel, Winnebago Towables has introduced the Winnebago Lite Five with four 28- to 34-foot floorplans, three of which are equipped with a single slideout and an optional wardrobe slide in the bedroom. With a cambered front cap, the fiberglass-and-aluminum Winnebago Lite Five, with dry weights from 6,907 to 8,953 pounds, can be towed by shortbed pickups. Features include high-gloss automotivelike gel coat exterior, fully enclosed-and-heated underbellies, 35,000-Btu furnace, high R-value insulation, patio awnings and stabilizer jacks. Amenities include a sectional sofa, island queen bed, a large bathroom with neo-angle shower, double-door refrigerators, a large amount of counter space and Bluetooth-enabled entertainment centers. Base MSRPs start at $28,993.

The Yellowstone division of Gulf Stream Coach has added a 29-foot rear-living room floorplan to its Canyon Trail XLT fifth-wheel series. The low-profile Canyon Trail XLT 25FLRW floorplan, with a dry weight of 7,297 pounds, has a single 38-inch-deep, 6-foot-2-inch tall slideout that contains a convertible sofa/dinette. Offering a large hallway closet with mirrored doors, the 25FLRW has a separate shower and bathroom, hardwood cabinet doors and drawers, laminated countertops with a solid-surface option and a queen bed with a flip-down fabric headboard with hidden storage. To accommodate shortbed pickups, the aluminum-framed vacuum-bonded side wall Canyon Trail XLT has an extended kingpin box. MSRP: $29,253.