Growing Up on the Comstock 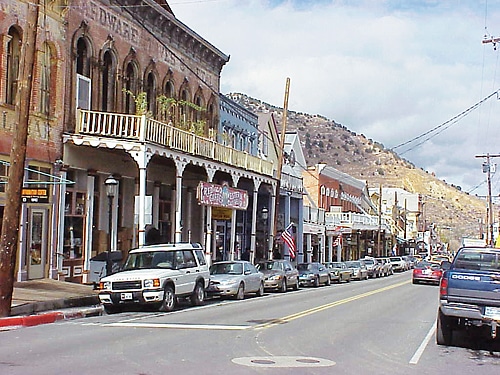 Virginia City, 150 years ago, was the richest place on Earth. It was the crown jewel of Nevada’s Comstock Lode. The jewel was silver, tons of it that flowed into our country’s coffers for 30 years. It funded an estimated $400 million of our

young nation’s westward-expansion, and paid the Union Army during the Civil War.

The riches of the Comstock were the reason President Lincoln in 1864 declared statehood to Nevada, long before it had met the population requirement.

Built into a steep mountainside, it was a modern town in the 1860s, with theaters, churches, opium dens and newspapers. Indeed, a young reporter at Nevada’s first newspaper, the Territorial Enterprise, made a name for himself here, quite literally. He arrived as Samuel Clemens; when he left 22 months later he was known as Mark Twain.

For 25 glorious years, it was the leading city in Nevada and the brightest and most important settlement between Denver and San Francisco. It had the only elevator this side of Chicago.

Today, Virginia City is the largest historic district in the United States. Its old buildings preserved or restored, it’s still a functioning town of private enterprise and remains the seat of county government.

With a past as rich as its storied silver vein, its business now is tourism. But that’s just evolved in the last 40 years. When LeRoy Goodman grew up here, in the years after World War II, it was simply an old mining town with no real future.

“We were just hanging on then. During the war, county government almost shut down. Most of the men were away in the service,” LeRoy told me. “In 1949, the mine shut down where my dad worked. He was good at fixing things, so he bought a garage. I hung out there a lot.

“It was across the street from the Silver Queen Saloon. When Clark Gable was making the movie ‘Misfits,’ down in Dayton, he’d drive up here from Reno on his way to work and stop in there for a couple shots. He was easy to talk to. He drove a Lamborghini. Its doors swung open from the top like wings.

“We had 12 kids in my graduating class. That was a big class … 38 in the whole school. After school, we usually went to somebody’s house. My mother was the telephone operator, so she always knew where we were. She knew where everybody else in town was, too. People all the time would pick up the phone and ask her where so-and-so was. She would know, or ring a few places and find out.

“At lunch time, I’d walk home and listen to ‘One Man’s Family’ on the radio. We all did that. At night we’d hear ‘The Shadow’ and ‘The Green Hornet.’”

Kids grew up here with a wonderful simplicity of desire. They knew one way of life, one standard of living. LeRoy explained it: “We had no doctors or lawyers or anybody here who lived differently than we did. If we were missing out on something, we didn’t know it.

“We had a sheriff and one deputy for the whole county. They had it easy. Nobody ever got in trouble.

“We were everybody’s kids — even people who didn’t have kids. Heck, they often took us fishing and to ball games in Reno. At Christmas, the fire department had a party for us. Every kid in town got a present.

“My mother’s telephone switchboard is in the museum now. We had party lines. Each family on the line had a different ring. She knew everybody’s ring. They were like names to her.”

Welcome to America’s Outback.
……….
Bill’s e-mail address: [email protected] Next month Bill will be on the open range in Florida.