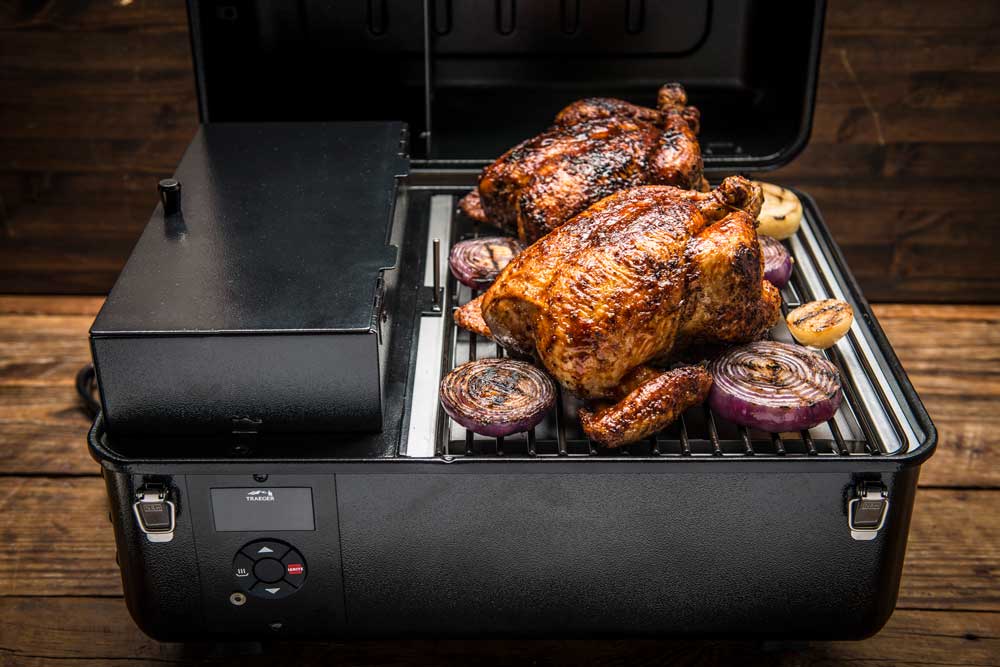 From low and slow to hot and fast, the Traeger Ranger portable pellet grill brings wood-fired grilling and electronic precision to the campground

If you frequent RV parks and campgrounds with hookups, the electric Traeger Ranger Portable Pellet Grill is an interesting variation on the portable-grill theme. The magic of the Traeger cooking system is the Traeger Digital Arc controller. Once plugged in, the system automatically feeds just the right amount of wood pellets into the fire pot where they are ignited by the “hot rod” and stoked by a fan to precisely control the grilling temperature in 5-degree increments.

From 170 degrees for smoking, all the way up to 500 degrees and back to 165 degrees for warming, the Ranger claims the ability to grill, smoke, bake, roast, braise and barbecue all on the same setup. To enhance the flavor, Traeger’s hardwood pellets come in 11 varieties from alder and cherry to hickory, mesquite and Realtree Big Game Blend.

We tried a few recipes and were impressed with the precision cooking we could do on the Traeger Ranger. We prepared a batch of pork shoulder steaks, cooked at 250 degrees for almost three hours, a salmon filet that we grilled at 350 for 30 minutes, and a one-pan dinner with roast chicken, veggies and potatoes cooked at 450 degrees for about 75 minutes.

All were smoky and delicious. From our perspective, though, the Treager’s greatest advantage shines through when slow cooking meat. Because you can control heat at low temperatures for long periods, and do that over a wood fire that imparts the smoky flavors of barbecue, the Traeger makes you look like a true grill master when serving up those briskets, ribs and pulled-pork sandwiches.

The Ranger isn’t the most portable of grills. Weighing in at about 47 pounds, plus another 12 pounds for the cast-iron griddle, it will likely be a two-person job to heave it in and out of an RV storage bay for all but the stoutest of campers. Without wheels or its own stand, it won’t be moving far once it’s heated up. To avoid the heave-ho, many Traeger owners stow the grill in the bed of their truck and fire it up tailgate-style.

The buttons, arrows and LED readout on the Ranger’s Mission Control-like panel can take a little getting used to, but once you get the hang of it, you can pretty much set it and forget it — though you’ll want to keep an eye on the pellet level in the hopper. For versatility and precise cooking of just about any cut of meat, the Traeger Ranger might be the next great add to your outdoor cooking ensemble.