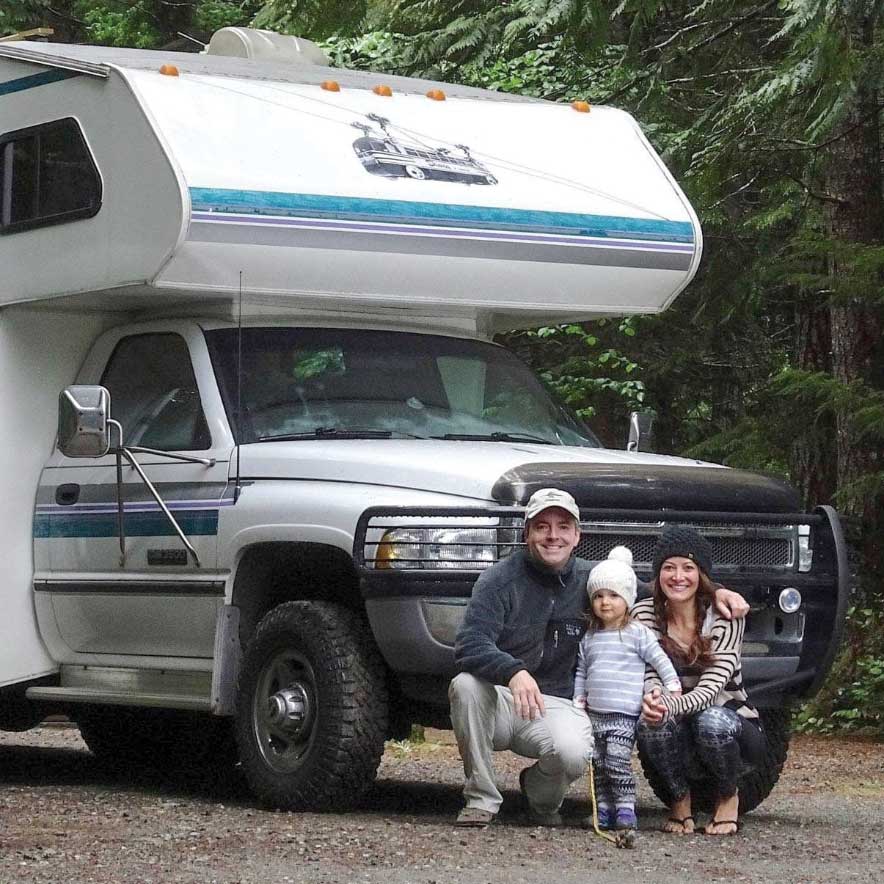 While motorhome owners like to think of themselves as modern day adventurers, the truth is that we have not quite moved up to Back to the Future’s vision of flying cars and unlimited travel possibilities. The creators of that 1985 film (plus its sequels) pictured a future without wheels, but in 2018 we are still limited to roads and where they can take us.

Or are we? At least one motorhome exists that has enough power to climb mountains, is small enough to navigate narrow streets and has the traction to drive across the sand or through a foot of snow. This isn’t newfangled technology, either – this motorhome is more than two decades old.

Paul, Bobbi and Sura Wagner pose by their classic ride.

Meet the Serro Scotty motorhome, the greatest little Class C that you have probably never heard of.

The Serro Scotty name is usually associated with the economical travel trailers its founder, retired Dodge salesman John Serro, began building in his garage in the 1950s. As these compact units gained popularity, his company grew, eventually expanding into the fifth-wheel and motorhome market by the 1990s. Serro manufactured a series of Class C’s built on a Dodge chassis, including several models with diesel engines and even 4WD, but production ended when a catastrophic fire destroyed the Irwin, Pennsylvania, plant in 1997. Yet the forward-thinking design of the Serro Scotty motorhome still draws buyers like Beverly Cameron of Colorado, and Paul and Bobbi Wagner of Oregon today, more than 20 years after the last Scotty was produced. These two very different sets of owners both agree that the Sero Scotty is a true classic – and the motorhome of their dreams.

For Beverly Cameron, a former pilot and FAA examiner, life changed with the 2006 passing of her husband, John. The couple had traveled extensively in their Pace Arrow, but it was showing signs of age, and Bev had promised John that she would not drive it alone. At the same time, she was not ready to give up the camping that they had loved.

She put their Class A coach on the market and asked her children to be on the lookout for a smaller motorhome, preferably with a diesel engine. A few weeks later, her son found a 1996 Serro Scotty Hilander at a local RV consignment shop with a price tag of $23,000. Though Bev had not expected to get a replacement so quickly, she agreed to take a look.
“I fell in love with it when I first saw it,” she remembers.

Decorator touches, like the backsplash and wall covering here, give a bright and
contemporary vibe to the Wagners’ Serro Scotty Hilander.

At 25 feet in length, the Class C could navigate small-town streets and parking lots, meaning no dinghy vehicle would be necessary. It could also fit into national and state parks campsites, which aren’t always accessible to larger Class A’s. In addition, the size made driving and handling easier. Along with the size, Bev was impressed by the sturdy quality of the construction, inside and out.

“It’s beefy and solid, and it just felt comfortable,” she explains.

The unit was not equipped with the optional 4WD, but its Cummins turbodiesel did promise power, and Bev notes that the Scotty “can go over these Colorado mountains without even trying.”

Another plus in this particular Hilander was the rear bed; along with a large cabover bunk, the unit’s floorplan provided room for Bev’s sister, Diane. Also a widow, she quickly became Bev’s new travel companion. 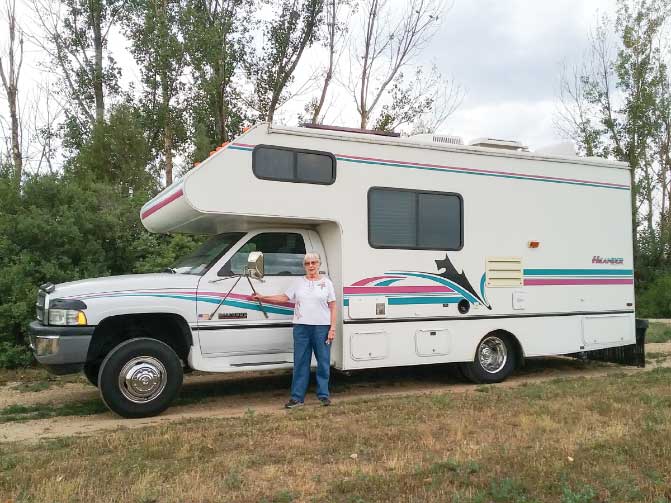 Bev Cameron with her Hilander 25, still with the original exterior.
Photo by Beverly Cameron

“It’s a good way to get along,” Bev says with a smile. “This way we each have our own room at opposite ends of the motorhome.”

The Scotty was equipped with all of the basic creature comforts – four-burner stove, microwave, refrigerator, LP-gas furnace, air conditioner and an Onan generator. The interior was done in neutral grays and blues, which Bev saw no need to change. In fact, except for regular maintenance and the addition of tire-valve extenders, Cameron’s Hilander looks much like it did when it rolled off the factory floor.

The two sisters have transited states from the West Coast to Cape Cod on trips of up to four weeks at a time, and are positive proof that you can continue to camp throughout life’s many stages. Bev credits choosing the right motorhome with making their continued adventures possible.

Choosing the right motorhome was also on the minds of Paul and Bobbi Wagner when they started their search for an RV. The young couple wanted a unit that would be comfortable for their young children and still allow them to camp at “off-grid” locations like beaches and ski slopes. 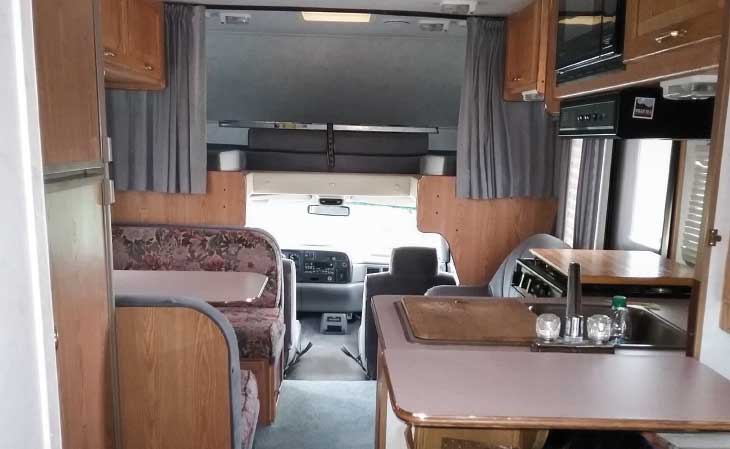 “My wife and I love the outdoors, and we love winter sports. We wanted reasonable fuel efficiency and 4WD, and we started looking around and realized that what we wanted was the Dodge Serro Scotty,” Paul explains.

They found a 1996 Scotty for sale by a private owner in Portland. At 30 feet in length, the unit was large enough to accommodate a growing family, and it was in excellent mechanical shape. It included manual locking hubs that allowed for off-highway versatility, but the interior and exterior were dated. In addition, the electrical system would need revamping to boondock for a week or more at a time. Despite the low $19,500 price tag, Bobbi was initially less than enthusiastic.

“This is one of those things where she said, ‘This is your project,’ but once we got going, she fell in love with it,” says Paul.

They began by painting the cabinets white and updating the hardware to create a more modern, open feel. For easier care with small children and wet ski boots, they tore out the carpet and replaced it with luxury vinyl wood-look flooring. They wanted to replace the jackknife sofa and happened upon a futon on Amazon.com that is covered in a durable, kid-proof fabric. Paul customized it to fit the space, and in front they added a rustic wooden live-edge table. With these changes and Bobbi’s decorating touches, like a new backsplash, they were able to create a bright, contemporary living space inside the Scotty. 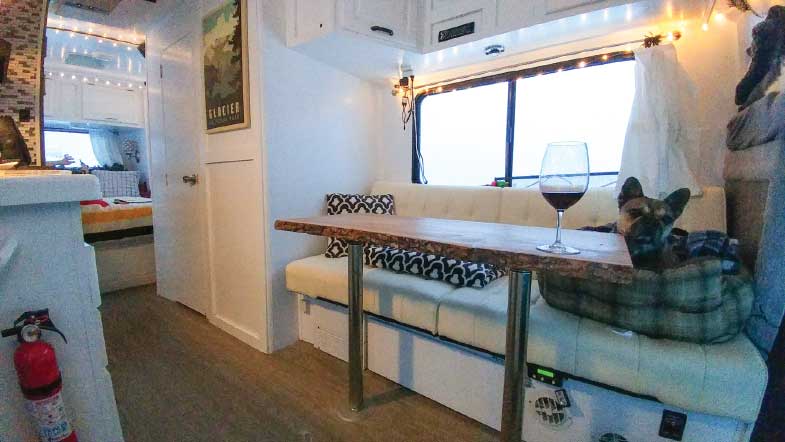 The Wagners made alterations to the exterior as well. After painstakingly removing all the old decals, Paul restriped the exterior himself while also adding some custom touches like the design over the cab. It depicts the historic “ski lift bus” that carried workers from the government camp up to Oregon’s Timberline Lodge. The couple also added other side decals for Mount Hood and the many ski slopes they’ve visited.

To improve their dry-camping abilities, Paul added additional solar panels to increase capacity to 500 watts. They also added three AGM batteries for a total rating of 325-amp-hours. They have also added a portable LP-gas heater to warm up the interior in addition to their furnace. Paul hopes to eventually modify their system to the point where they never need to run a generator.

“We really like camping off-grid. Our goal is self-sufficiency,” he says, explaining that they often park for seven days at a time in ski resorts where overnight stays are allowed but hookups are unavailable. 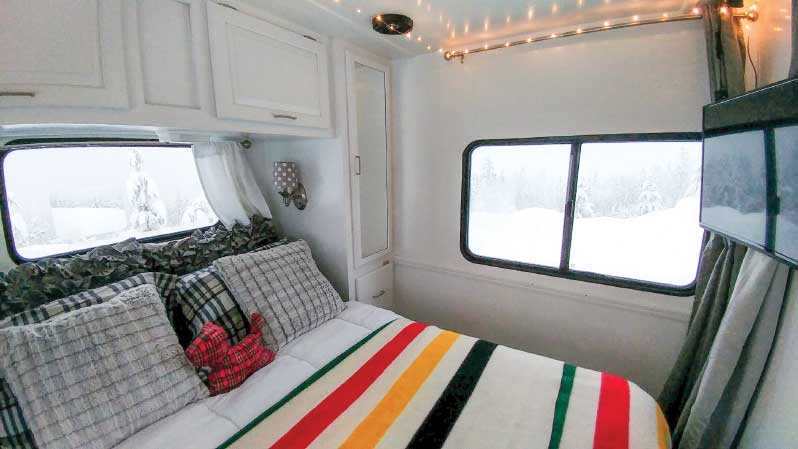 All of that winter camping has made the Scotty’s 4 X 4 capability invaluable. The Wagners have equipped their motorhome with Goodyear Wrangler tires, traveling safely through snow-covered roads as far north as the Canadian Rockies.

They have been equally happy with its performance on sand, and are amused at the looks they get when they pull their full-size motorhome onto the beach. It is this versatility, combined with interior comfort, that makes the Serro Scotty so perfect for a young family. Any parent who has carried a playpen, chairs, coolers and toys to and from the beach knows that vacations can be stressful, but the Wagners note that they were able to enjoy their summer with 4-year-old daughter, Sura, and newborn son, Sagan, because of the convenience of owning their Scotty.

“The baby has actually spent more of his life in the RV than at home,” Paul laughs.
It may be true that no one motorhome is perfect for everyone, but the Serro Scotty Hilander comes close. For these two families at least, this classic ride has proven to be the perfect vehicle to forge new memories today and for years to come.

Searching for a Serro? 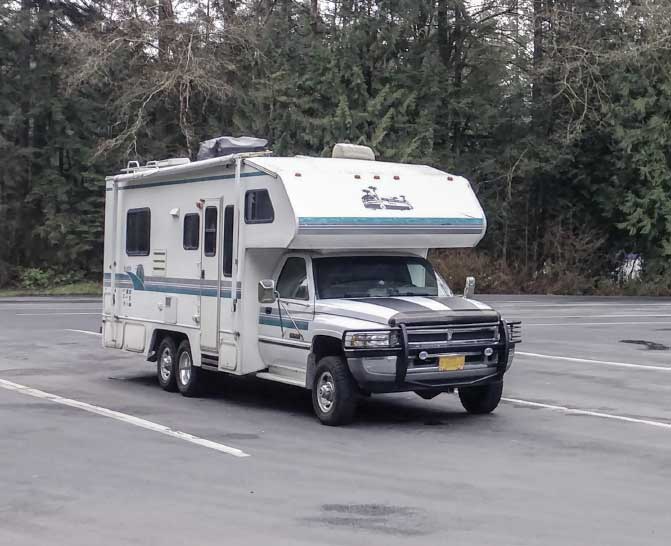 Paul Wagner removed the original decals from his coach and
restriped the exterior himself.

Class C Serro Scotty motorhomes are a sought-after commodity on the used market. The 4 X 4 models equipped with diesel engines, like the Wagners’ motorhome, are in the highest demand and tend to sell quickly. If you can find one, expect to pay anywhere from $25,000 to $44,500, depending on the motorhome’s length and condition.