Great Lakes of the Southeast: Land Between the Lakes 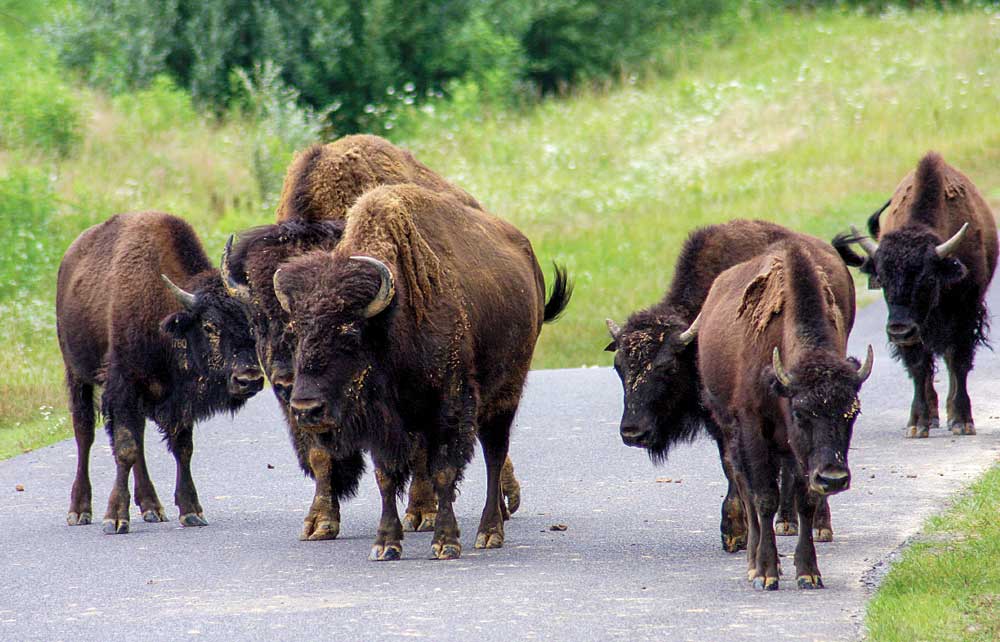 On the border of Tennessee and Kentucky, America’s largest inland peninsula entices RVers to a vast outdoor playground just waiting to be explored

Steam rose in shimmering columns from the blacktop, as dark-gray clouds slid across the sky, carrying the summer squall east. The sun’s rays edged across the parking lot, then brightened the entrance to the Homeplace. Inside the boundaries of this replica of a working 1850s family farm, only a few travelers wandered the grounds on a late-June Wednesday afternoon.

The Homeplace, promoted as a living-history museum, is located within the 170,000 acres of forest, wetlands and open pastures that make up Land Between the Lakes National Recreation Area in western Kentucky and middle Tennessee. Land Between the Lakes — almost universally called “LBL” in the region — gets its name because it lies between Kentucky Lake to the west and Lake Barkley to the east. The two long, north-south bodies of water serve up 300 miles of undeveloped shoreline and countless sections of water to explore or fish for largemouth bass, catfish, crappie and other species.

Justin Keeling, agriculture coordinator at the Homeplace, was crafting various woo
dworking projects after the storm rolled through that June afternoon. “It’s way too wet to be doing fieldwork,” he said. The farm raises oxen, mules, sheep, pigs and chickens, including rare and endangered breeds. Various plants and field crops grow on the property, most of them cultivated from heirloom seeds that date to before the Civil War. Visitors can purchase the legacy seeds in the gift shop.

Unlike places such as Colonial Williamsburg where employees remain in character and use speech appropriate for a particular time period, the six full-time employees and two interns at the Homeplace dress in period outfits but do not portray specific people. This eliminates the awkwardness of trying to explain to modern-day visitors the intricacies of farmwork in language they don’t understand or being forced to use anachronisms.

“I’m a historian, not an actor,” said Keeling, before he demonstrated how to craft a table leg on a lathe spring pole, a hands-on example of 1850s’ craftsmanship.

A Tale of Two Rivers

President John F. Kennedy officially designated the national recreation area in 1963, but the land between the Cumberland and Tennessee rivers had been inhabited and used for numerous purposes for at least 3,000 years before then. The Woodland Indians foraged and hunted in the area from 1000 B.C. to 1000 A.D. The Mississippian Indians later farmed the region, then were followed by various tribes, including the Shawnee, Choctaw, Chickasaw and Cherokee.

The land, known as Between the Rivers before it became a national recreation area, teemed with herds of elk and bison and was home to deer, bears, wolves, turkeys and bobcats. The animals were so plentiful that a section of Between the Rivers was often called the Garden of the West. 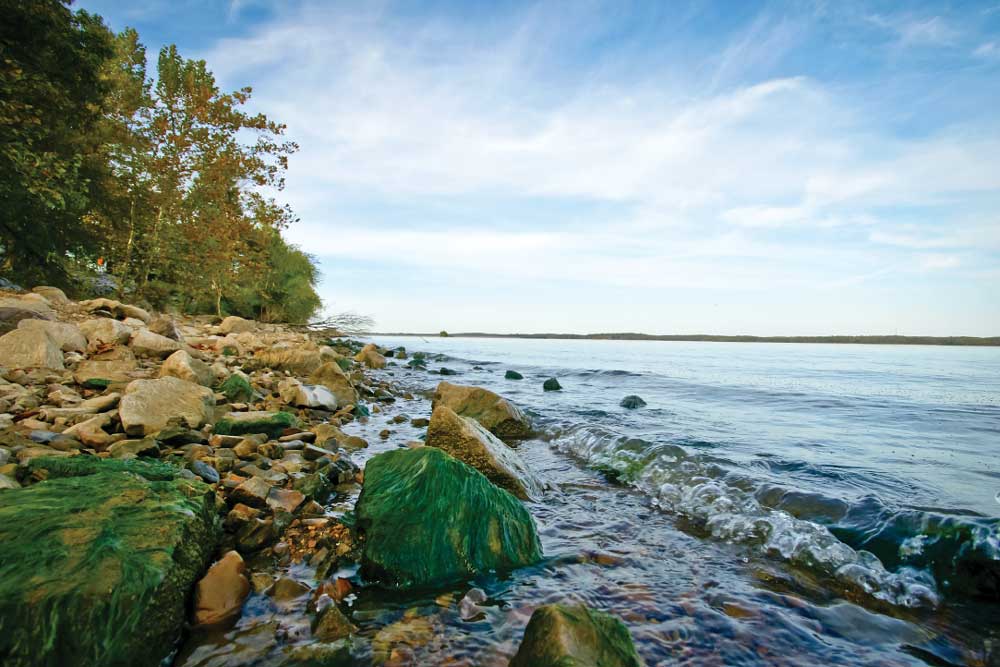 Formed by the damming of the Cumberland River, Lake Barkley stretches 134 miles and has more than 1,000 miles of shoreline.

The first European explorers passed through in 1540, and the French established
a trading post on the Cumberland River as early as 1692 so they could trade with the Shawnee. By 1800, however, all of the bison in the region had been killed, and by 1846, so had the elk. The area continued to thrive, however, because the land held large amounts of minerals and vast hardwood forests.

Deposits of limestone, hematite, magnetite and iron ore enabled eight furnaces to produce iron in large quantities from 1820 until the beginning of the Civil War in 1861. The hardwood forests were so productive that in 1906 one company moved 3 million railroad ties via the Tennessee River, enough ties to build a railroad from Washington, D.C., to Denver, Colorado. Flatboats also moved iron, tobacco, wheat, hemp, flax, cotton, corn and livestock to markets in cities as far away as Philadelphia.

Settlers from England, Scotland, Ireland and Germany brought family recipes for whiskey from their homelands, and the region became noted for its whiskey, as well as for the tanning of animal hides.

Land Between the Lakes National Recreation Area has 1,400 campsites in 21 campgrounds. Energy Lake, Fenton and Hillman Ferry campgrounds in the northern section and Piney and Wranglers campgrounds in the southern section offer sites with full and partial hookups. RVers who bring horses can stay in one of Wranglers’ 220 sites and explore 100 miles of equestrian trails. Turkey Bay Off-Highway Vehicle Area offers access to OHV trails and primitive campsites.

In Tennessee, on the western shore of Kentucky Lake, Paris Landing State Park accommodates RVs with 45 sites with water and electric hookups, along with 18 primitive sites.

The history of the area is so unusual that during a border dispute between Tennessee and Kentucky, residents didn’t know which state they lived in, so they called themselves residents of Between the Rivers. The region also played a role in the Trail of Tears, the forced migration of Native Americans after the passage of the Indian Removal Act of 1830, and in the Civil War when the Confederate fort along the Tennessee River, Fort Henry, fell in 1862.

The Tennessee Valley Authority came into existence as part of President Franklin D. Roosevelt’s New Deal as a means to put people to work during the Great Depression. To help combat flooding, facilitate trade and create recreational opportunities, the TVA dammed the Tennessee River in the early 1940s, creating Kentucky Lake. Nearly 3,500 residents of Between the Lakes were displaced when the 134,000-acre reservoir was created, and the government’s use of eminent domain to acquire the land was controversial.

In the 1960s, the U.S. Army Corps of Engineers dammed the Cumberland River, creating Lake Barkley, named for President Harry S. Truman’s vice president, Alben Barkley, from nearby Paducah, Kentucky. The Corps then built a canal between the two bodies of water, decreasing the shipping distances for goods being transported to market without the use of locks.

Today, Land Between the Lakes attracts tourists from around the world. Emily Cleaver, who works for the U.S. Forest Service, said approximately 1,672,000 visitors entered LBL in 2017.

One attraction not to be missed, especially for families, is the Elk and Bison Prairie, just north of the visitor center on the Woodlands Trace National Scenic Byway. Within the 700-acre enclosure, more than 40 elk and more than 70 bison roam freely. After paying $5 per vehicle to enter, visitors slowly drive their enclosed vehicles along the 3.5-mile loop that winds through the native grassland of Kentucky. The best times to view wildlife are at dawn and dusk because the animals generally take cover in the heat of the day. The elk and bison are large and wild, so visitors should remain in their vehicles at all times.

Children and visitors who are young at heart may enjoy a visit to the Woodlands Nature Station, located between Honker Lake and Hematite Lake, where staff will inform them about the area’s flora and fauna. LBL is home to some 1,310 plant species, 352 land animal species, 69 reptile and amphibian species, and 260 bird species. 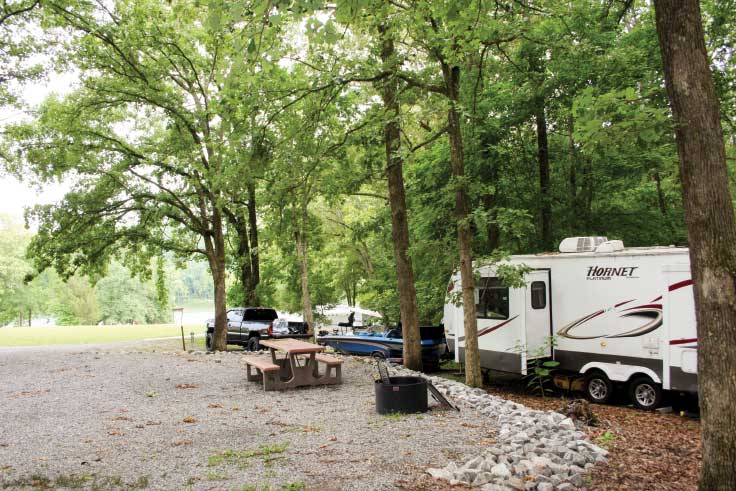 Hillman Ferry Campground has 374 wooded and lakefront campsites and easy access to hiking and mountain biking.

Hikers can explore 261 miles of trails, ranging from moderate nature walks to multiday adventures. “Our easiest nature hikes are the Hematite Trail, a 2-mile trail that wraps around Hematite Lake, and Honker Trail, a 5-mile trail that goes around Honker Lake and the nature station,” Cleaver said.

Mountain bikers can pedal more than 70 miles of trails, many of which demand a high degree of skill. Cyclists on road bikes or beach cruisers will find few experiences more sublime, especially at sunset, than riding the bike path that crosses the top of Kentucky Dam, which holds back Kentucky Lake. 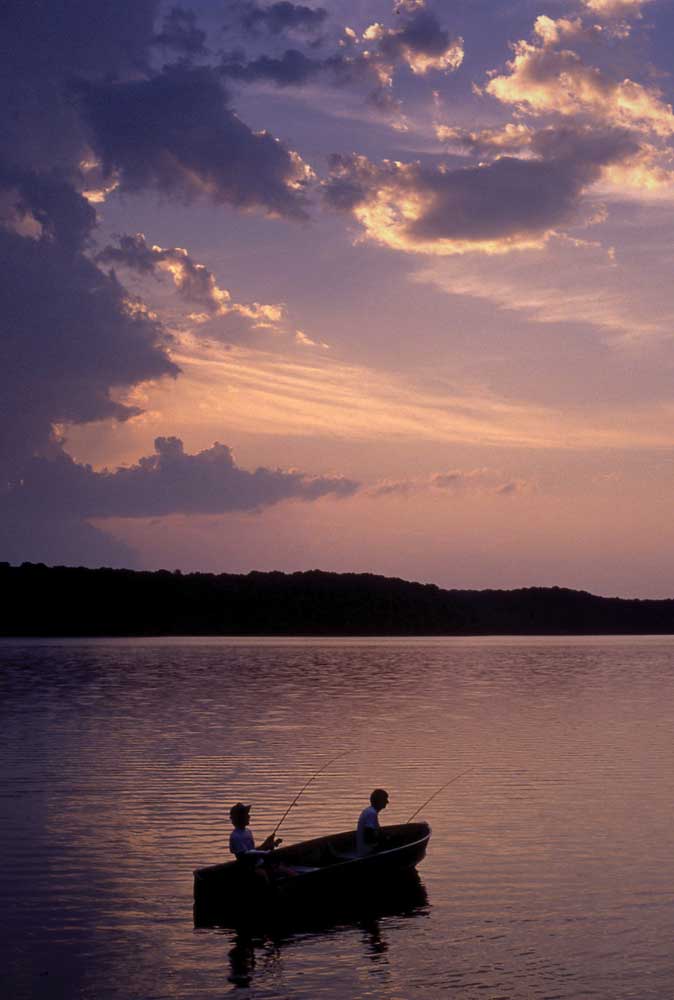 TAKE THE BAIT: Early morning and late-evening fishing in LBL can pay off with big catches of bass, catfish and crappie.

Though LBL obviously holds plenty of terrestrial appeal for travelers, the lakes are the primary attractions. Various federal and state agencies are in the process of creating water trails — “blueways” — within LBL’s boundaries. Canoers and kayakers, however, don’t need an official map to investigate the countless coves and inlets that exist within the hundreds of miles of undeveloped LBL shoreline. Anglers and boaters of all kinds can launch their watercraft at any of the 27 boat ramps.

Camping on the Waterfront

Not surprisingly, the campsites thatfill up the quickest are those along the water, granting campers the ability to take a dip, cast a line or launch a kayak only steps from their sites. On that late-June Wednesday, most of Hillman Ferry Campground’s 374 sites were filled, and all of the waterside sites were occupied. This well-run campground, featuring various play areas, a swimming area and easy access to mountain-biking trails, features all manner of sites, though many RVers may prefer not to be so close to their neighbors.

Robert Smith has been boondocking annually in the small, rustic Taylor Bay Campground since before he was born. He said he has a 1979 photo of his mother, pregnant with him, standing in front of the campsite that his 31-foot Hornet trailer and bass boat currently sat in, with his parents’ trailer parked in the neighboring site.

Fallow deer make their home throughout Land Between the Lakes.

Smith had spent the day fishing, pursuing “anything that’s biting,” he said. The extreme heat of summer, however, made the fishing less productive than it is during the cooler spring and fall. During those seasons, it is more difficult to secure a campsite, though that doesn’t stop him from setting up in the same campsite at Taylor Bay month after month.

Matt Tomc, from St. Louis, slowly backed his 37-foot Mesa Ridge trailer into a campsite in Kentucky Dam Village State Resort Park, just outside of LBL. The campground is open from April through October and features 221 paved sites with hookups. Tomc and his family had traveled to numerous campgrounds in this part of the country, and they “thought it was time to check out Land Between the Lakes,” Tomc said. They intended to visit the Homeplace and rent a boat, he added.

Regardless of where LBL visitors stay, they will almost certainly want to at least cool off in all of that water. They can do so at numerous beaches, but Cleaver, who knows LBL well, recommends Moss Creek as one of the best day-use areas for swimming. “It has a nice place to picnic, grill and enjoy Kentucky Lake.”