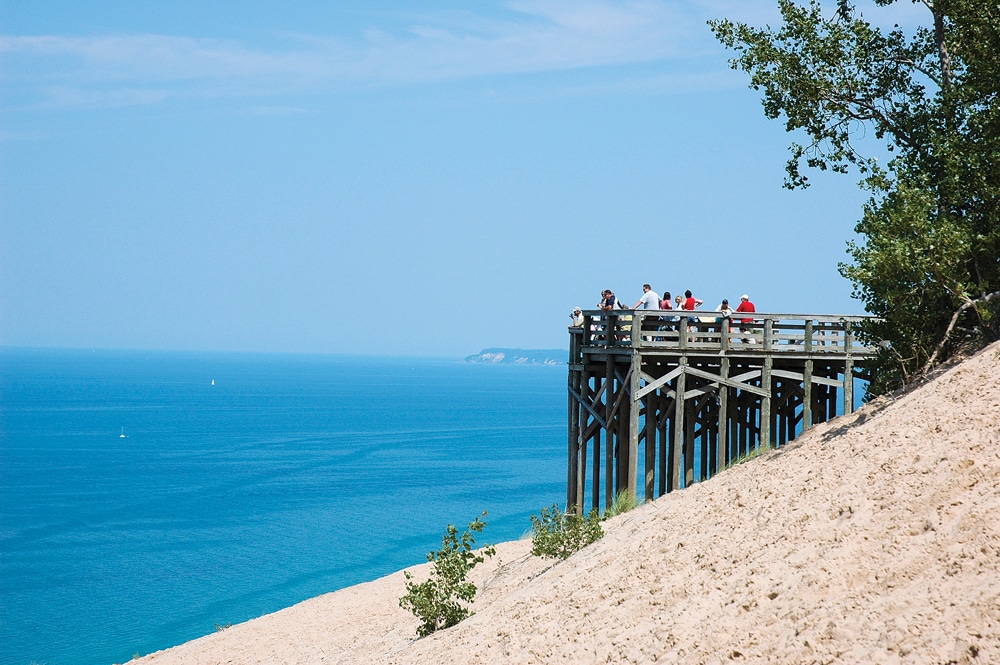 The vast Lake Michigan shoreline may look like an ocean, but it’s an epic freshwater paradise. Tag along on a coast-hugging 200-mile road trip from Traverse City to Mackinac Island.

From the bottom, it looked like an easy climb up a sand dune. Yet 20 minutes later, I’m still huffing and puffing, as with each step my footing quickly loses its grip on the steep, sandy hillside. I soon realize I’m ascending the mother of all sand dunes, the strenuous Dune Climb at Sleeping Bear Dunes National Lakeshore, a national park that skirts Lake Michigan’s oceanlike shoreline.
A stiff wind blows tumbleweeds across my path and sand in my face. I still have another bluff to conquer, but I can see the summit ahead where, I’m told, the view makes the climb well worth every grunt and every grain of sand in my now-
full sneakers.

“When people ask where to bring their kids, we tell them to come out here,” says tour guide Mike Norton between breaths. “We say, ‘Tell your kids it’s the biggest sandbox in the world.’”
I turn and behold a striking view of this stretch of northern Michigan’s Leelanau Peninsula. I see Glen Lake, carved by glacial erosion, with its striking luminescent pale-green hues.
“When you get to a high place, sometimes you can look out at two or three lakes, and each one will be a different color,” says Norton. “You might have one that’s a deep jade green, another that’s turquoise and yet another that’s cobalt blue.”
When we reach the summit, we’re greeted by a commanding view of Lake Michigan with whitecaps created by a blustery wind and stunning colors that change as the sun ducks in and out of the clouds. From up here, I witness the many faces of northwestern Michigan’s rugged environment, from desert to wilderness, forest to beachfront and sand dunes to rain desert.
It’s the first day of my peninsula- and-island-hopping adventure, a more than 200-mile trip along U.S. Route 31 from the Traverse City area to Mackinac Island, a region with a prominent lumbering, fur-trading and Native American history. In the state with the longest freshwater coastline in the country, I’ll pass shimmering lakes within valleys dotted with cherry orchards and vineyards. I’ll experience the charm of the boating communities of Charlevoix and Bay Harbor. I’ll follow in the footsteps of Ernest Hemingway around historic Petoskey. And I’ll leave behind the RV life in exchange for bicycle jaunts and horse-and-buggy rides on forested Mackinac Island.

After the Dune Climb, Norton leads me along 7-mile Pierce Stocking Scenic Drive, created by and named after a local lumberman turned nature buff. We stop at an overlook of Glen Lake with a view of Alligator Hill, shaped like the reptile’s protruding head and flat jaw.
Our next stop, Dune Overlook, is a 4-square-mile coastal scene in a rain desert that looks more like New England. “It gets lots of rain, and because it’s sand, the water disappears almost immediately,” says Norton. “So the plants living there, like cottonwoods and cacti, can handle long periods of aridity.”
The most dramatic stop, however, is Lake Michigan Overlook, perched 450 feet atop sandy cliffs from where I can see out to North and South Manitou islands in the distance.
Still in the national park, we drive through the ghost town of Glen Haven, passing Jack pine and fir trees on the way to the Glen Haven Maritime Museum. “Glen Haven was a fueling port,” says Norton. “They cut wood from the forest for steamships that burned wood in their boilers.” A former Coast Guard station, the museum reflects how things looked during the early 1900s with exhibits that include a boathouse, a bunk area and the steering-wheel helm of a steamer.
Upon leaving the park, we pass through touristy Glen Arbor and stop for lunch at Cherry Republic for cherry jam, cherry salsa, dried cherries and even cherry barbecue sauce. “Everything in this restaurant is cherries, even the coffee,” confirms owner Bob Sutherland. This is the number one cherry-growing region in the world, after all, with a unique peninsula microclimate.

The view from the top of
the Dune Climb is worth every step. (Previous spread) Charlevoix South Pier Lighthouse.

Back in Traverse City, we take Michigan Highway 37 up the Old Mission Peninsula, a land sliver snuggled between the East Arm and West Arm of Grand Traverse Bay. We pass farmers markets, cherry orchards and vineyards, stopping at the antique-filled Old Mission General Store, which dates back to the 1830s, and Bowers Harbor Vineyards, where we sample cherry wine. The whitewashed 1870 Mission Point Lighthouse sits on the peninsula’s northernmost tip, where howling winds add to vivid sunsets.
Heading north on Route 31, the gleaming 17-story tower of Grand Traverse Resort and Spa in Acme is a prominent landmark, one of northern Michigan’s tallest buildings. I find another interesting sight as I approach Charlevoix, a roadside exhibit of a giant pie slice representing what was once the world’s largest cherry pie. According to the sign, the pastry baked in 1976 used 12,750 pounds of cherries and pie filling and 1,730 pounds of crust.

As advertised, Arch Rock Trail leads to its namesake span.

Gleaming white pleasure boats line Charlevoix Marina, not far from a curving beach and rocky pier flanked by the deep-red Charlevoix South Pier Lighthouse. But what grabs my attention are the nearby “mushroom” stone houses that date back to the 1920s and 1930s. The gnomelike homes have rounded cedar-thatched roofs.

Route 31 continues to hug Lake Michigan as it passes the golfing and beach community of Bay Harbor. A few miles farther up is Petoskey, an upscale town named after 19th-century Odawa chief Ignatius Petoskey (originally Pet-O-Sega), born to a French fur trader and an Ojibwa mother. His statue stands in the center of a small square opposite the 1899 Stafford’s Perry Hotel. The area is also home to the official Michigan state stone, the Petoskey stone — shiny 350-million-year-old coral found along the shores of Little Traverse Bay.
I start my Petoskey tour at the Little Traverse History Museum, housed within an 1892 train depot. Exhibits show how brawny loggers once harvested area forests to rebuild Chicago after the 1872 fire, and photographs and artifacts highlight favorite son Ernest Hemingway, who spent much of his youth in the area after his father built a cottage on nearby Walloon Lake.
“We had Hemingway in his formative years. I think we had him at his best,” says Peter Fitzsimons of the Petoskey Area Visitors Bureau.
“We had him when he was developing his love of the outdoors, his love of hunting and fishing, and his respect for the Native American Indians — all of the things that wove their way through his writing.”

We follow Hemingway’s trail to tree-lined State and Woodland streets and a simple white home where he briefly lived while renting a room from Eva Potter. It was known as Potter’s Rooming House. Hemingway also frequented the 1875 billiard hall that’s now City Park Grill, housed in one of Petoskey’s oldest buildings. In the 1910s and 1920s, a young Hemingway would jot down ideas for his stories while seated at the mahogany bar. “In one of the short stories of Nick Adams, Hemingway actually refers to this place as the Annex, which it was once called,” says restaurant manager Jason Septic.
Between the bright-green waters of Walloon Lake and Lake Charlevoix, not far from Boyne Mountain’s winter ski trails and summer zip-lines, lies the small community of Horton Bay. A sign outside the Red Fox Inn and Hartwell & Company Bookstore reads “Hemingway Slept Here.” Inside, books of Hemingway’s stories and biographies clutter the store, and quotes from the author adorn the walls.
“My grandfather taught him how to fish,” says owner James Vol Hartwell. “This village influenced his interests and attitudes.”

An hour’s drive north leads me to Mackinaw City, where I hop a 20-minute ferry to hilly Mackinac Island, one of the Midwest’s most popular resort destinations.
I arrive in the busy port flanking Huron Street, the island’s quaint but bustling storefronted main drag. It’s cluttered with bicyclists and echoes with the clip-clop of horse hooves — motorized vehicles have been banned here since 1898. Bicycle rentals and chocolaty fudge shops dominate every block, providing some of the island’s favorite pastimes.
I begin my visit with a walk up the steep stone palisade to Fort Mackinac, built by the British in 1780 but falling to the Americans after the Revolutionary War. Today, interactive displays and period furnishings fill 14 original buildings, while re-enactments and cannon firings reverberate within the stone ramparts.
Although horse-driven carriages will take you to the same sights, I opt to rent a bicycle and tour the island along curvy roads and bike paths cutting through forested bluffs. I stop in at a few churches and museums on Market and Main streets and find more interesting sights inland.

Hop a ferry to Mackinac Island harbor but leave your RV on the mainland: motorized vehicles have been prohibited here since 1898.

Unusual stone formations pierce the treeline: Arch Rock, a bridgelike span of eroded breccia carved out of a hillside 146 feet above Lake Michigan’s shoreline, and Sugar Loaf Rock, another breccia mass shooting up 75 feet. The best views of the 2,318-acre island can be seen from nearby Point Lookout and the hilltop site of Fort Holmes.
I also stop in at the island’s iconic Grand Hotel, built in 1887 during the Gilded Age and particularly noted for the hundred or more rocking chairs on its 660-foot-long porch. The Classic Revival-style hotel was popularized in the 1980 movie Somewhere in Time with Christopher Reeve and Jane Seymour, filmed at the hotel and on the island.
“I’ve been here 15 years and I’ve never had a day when someone didn’t ask me about the movie,” says hotel historian Bob Tagatz of the love story where the characters connect through time travel. “It’s certainly part of our fabric and our history.”
As I return to the mainland, I again gaze upon the aquamarine coast that made this stretch of Lake Michigan shoreline so enticing to me. “It’s crystal clear and just has a beautiful look to it,” Fitzsimons told me back in Petoskey. “The water defines who we are. For the early Native Americans, it was their transportation. Today, it’s our air conditioner in the summer and our snow generator in the winter. It’s our recreation and means so many things to us. It’s not a good lake — it’s a Great Lake.”

A statue
of Chief Petoskey rides the winds of change in his namesake city.

Camping on the Lake Michigan Coast

On my trip up the Lake Michigan shore, I met Florida RVer Jane Dikman, who first visited the area with her husband in 2009.
“We had a reservation for a week and ended up staying four months,” Dikman told me. “Lake Michigan is the Promised Land. We actually refer to it as the Michigan Ocean because it’s every bit as beautiful as the Caribbean. But as they say up here, ‘No sharks, no salt.’”
Michigan has more than a thousand RV parks, from upscale resorts to mom-and-pop campgrounds to state parks and national forests. Take advantage of the following websites to search by city for RV parks along the Lake Michigan coast and throughout the state.
www.goodsamcamping.com | www.michigan.org/campgrounds-rv-parks