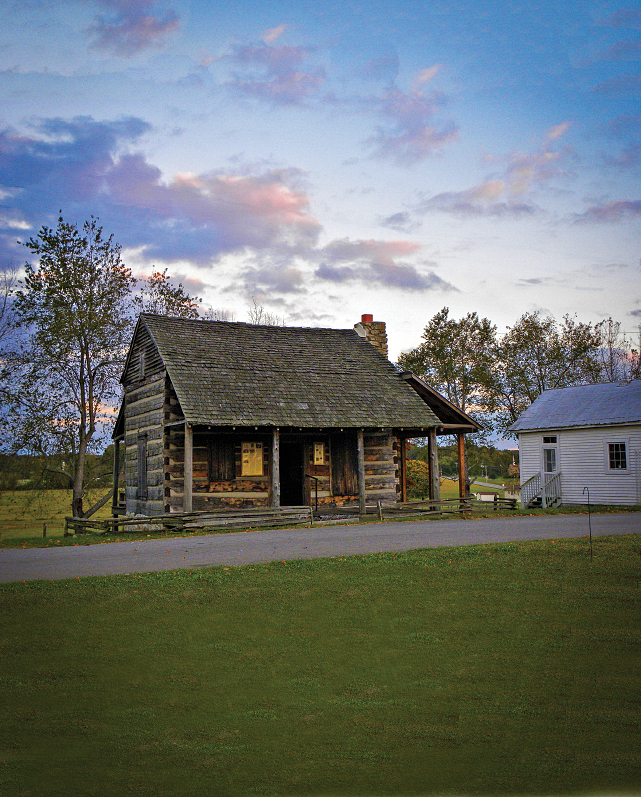 Fall is the season to get out on the open road for a quick weekend getaway or a relaxed longer trip to enjoy the changing leaf colors, autumn festivals and, if you pick your stops right, some hair-raising experiences. Just in time for Halloween, we’ve selected five of America’s most supernatural haunts, along with an assortment of nearby RV parks that are considerably more down to earth. Prepare to be scared. Mwahahahahaha…!

Sooner or later, anyone searching for well-known paranormal activities in American history will likely come across the tale of the Bell Witch. If you travel through middle Tennessee seeking a thrill from this legendary haunting, you’ll be among thousands of visitors to do so over the centuries, including President Andrew Jackson.

Visitors to the Bell Home in Adams, Tennessee (above), may find themselves sharing the company of a witch.

Less than an hour’s drive from Nashville, the Bell Witch Cave and homestead (www.bellwitchcave.com) are in the small town of Adams. According to local lore, the Bell Witch is the spirit of Kate Batts, a neighbor of the Bell family in the early 1800s. Batts believed she had been swindled by John Bell in a land purchase and swore on her deathbed to haunt his family. In the years that followed, it is said that the Bells were tormented by a poltergeist that came to be known as the Bell Witch.
Fall is an ideal time to visit this spectral site, as locals put on a festival (www.bellwitchfallfestival.com) and a play highlighting the ghostly legend.
For those who appreciate history and the outdoors, the Bell farm also shows how rural families lived during the 1800s and is close to the Red River for canoeing and kayaking.
If you’d like to read up on the history of haunts in the area prior to visiting, seek out The Bell Witch: The Full Account (www.bellwitch.org) by longtime historian Pat Fitzhugh. For fun fall activities in nearby Nashville, visit www.thenashvilletraveler.com.

Not only is San Francisco an amazing place to visit in the fall for seasonal festivals to enjoy by day, but, come nightfall, the city has more than its share of paranormal activities. Well-known haunts include Golden Gate Park’s Stow Lake, the Queen Anne Hotel and the Curran Theatre. 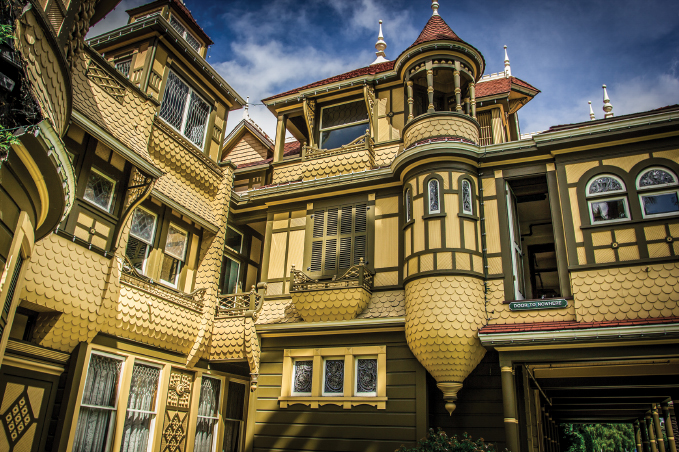 San Jose, California’s Winchester Mystery House has been called “The most haunted house in the world.”

One of the most famous haunts is Alcatraz Island (www.nps.gov/alca), home to a federal prison from 1933 to 1963. Reports from both tourists and ghost hunters include unexplainable sounds and smells, and banjo music believed to be played by the most infamous Alcatraz inmate, gangster Al Capone. Beyond visiting “the Rock” for its ghostly associations, visitors can enjoy the island’s tide pools, bird-watching opportunities and spectacular views of the bay.
In nearby San Jose, the sprawling Winchester Mystery House (www.winchestermysteryhouse.com) has been called “the most haunted house in the world.” Constructed over the course of several decades by Sarah Winchester, the vast Victorian-style mansion was supposed to ward off spirits of those killed by her deceased husband’s famous repeating rifles. The widow’s psychic advised her never to stop building, and the cavernous residence’s curiously twisting hallways, secret passageways, and rising and falling staircases attest to that. Now a tourist attraction listed on the National Register of Historic Places, the mazelike home has triggered numerous ghostly sightings.
Be sure to time your autumn visit to coincide with regional wineries’ magical time of year called the Crush, the culmination of the yearlong process of growing wine grapes. Many wineries in nearby Napa and Sonoma counties host fall events surrounding the grape harvest.
Greenbrae
Marin Park (Good Sam Park)
888-461-5199 | www.marinrvpark.com
Petaluma
San Francisco North/Petaluma KOA
707-763-1492 | www.sanfranciscokoa.com
San Jose
Coyote Valley RV Resort (Good Sam Park)
866-376-5500 | www.coyotevalleyresort.com

For a fall trip that includes not only local haunts but scenic views, outdoor activities and family fun, follow the Haunted History Trail of New York (www.hauntedhistorytrail.com). Spanning 13 counties across the state, the trail is rife with legends of spirits dating back to early Native Americans and the first Dutch settlers. 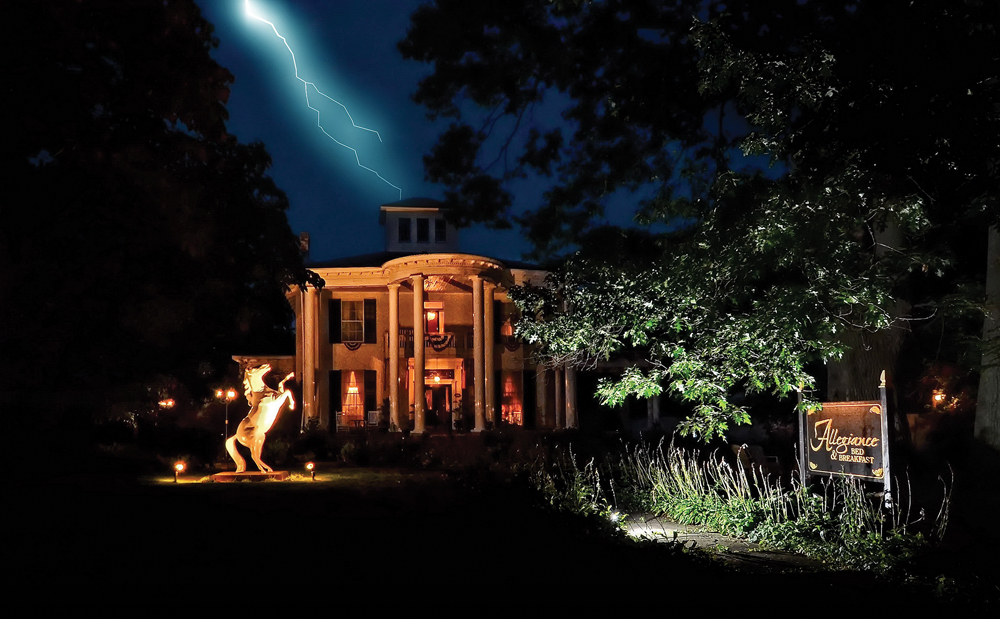 Visitors may not think of a haunted house when seeing this stately B&B in upstate New York, but overnight guests reportedly include those of an otherworldly nature.

East Bethany’s Rolling Hills Asylum, a stop on the trail in the Finger Lakes region, was rated the second most haunted U.S. site by Haunted North America. Other stops in the Finger Lakes include the Allegiance Bed & Breakfast
(www.allegiancebandb.com ) in Mount Morris, a mansion that looks like a miniature White House. Rumored to have visitors of an otherworldly nature, the lodging was named for “Pledge of Allegiance” author Francis Bellamy, who was born nearby.
When not in pursuit of the paranormal, fall trips to the Finger Lakes can include harvest festivals, apple-tasting tours and corn mazes. Finger Lakes vineyards wrap up the growing season with a host of October events, and the annual Autumn Festival of Ales, on October 3 this year, brings thousands of craft-beer lovers to the village of Honeoye Falls.
Byron
Southwoods RV Resort (Good Sam Park)
585-548-9002 | www.southwoodsrvresort.com
Ithaca
Pinecreek Campground (Good Sam Park)
607-273-1974 | www.pinecreekcampground.com
Spruce Row Campground and RV Park (Good Sam Park)
607-387-9225 | www.sprucerow.com
Springwater
Holiday Hill RV Resort (Good Sam Park)
800-719-2267 | www.holidayhillcampground.com
Watkins Glen
W.W. Clute Memorial Park and Campground
607-535-4438 | www.watkinsglen.us/clute-park-campground

While the Windy City might ward off some tourists when temperatures become bitterly cold in the winter, September and October are ideal to visit for autumn festivals, spectacular fall colors and reasonable temperatures. To get into the spirit of the Halloween season, visitors can also seek out some of Chicagoland’s favorite haunts.

Chicago’s famous Drake Hotel is just as well known for the guests who aren’t on the reservation list.

In the city itself, one of most celebrated haunted places is the Drake Hotel (www.thedrakehotel.com), built in 1920. While the Beaux-Arts hotel has many mysterious happenings in its history, the best-known ghost is the Woman in Red who haunts the 10th floor. The specter is said to be the spirit of a woman who jumped out a 10th-floor window after learning of her husband’s infidelity at a New Year’s Eve party the year the hotel opened.
Venture outside the city about 30 minutes to Midlothian, and you’ll find an abandoned cemetery known as Bachelor’s Grove, with numerous reports of ghosts and supernatural occurrences spanning its history. Cuba Road, which lies between the towns of Lake Zurich and Barrington, has sitings of all sorts of paranormal phenomenon, including phantom cars, spectral lovers and a vanishing house. Along Cuba Road lies White Cemetery, a small graveyard dating from the 1820s known for “mysterious hovering balls of light,” according to folk historian Michael Kleen (www.mysteriousheartland.com).
Joliet
Leisure Lake Membership Resort (Good Sam Park)
815-741-9405 | www.leisurelakeresort.com
Marengo
Lehman’s Lakeside RV Resort (Good Sam Park)
/span>815-923-4533 | www.lehmanrv.com
Yorkville
Hide-A-Way Lakes
630-553-6323 | www.hideawaylakes.com

For a taste of the Old West and a hauntingly good time, swing by the tourist town of Tombstone, 70 miles southeast of Tucson. With a name that says it all, Tombstone was a dangerous place in the late 1800s. In less than seven years, Tombstone’s population grew from 100 inhabitants to around 14,000 with the success of local silver mines. The West’s most famous shootout took place at the town’s O.K. Corral between a band of outlaw cowboys and legendary lawmen Doc Holliday and the Earp brothers.

The Old West comes alive in Tombstone, Arizona, at the 1881 Bird Cage Theatre, said to be haunted by the many souls who were murdered inside.

Tombstone’s best-known sites still stand for visitors to experience, including the Bird Cage Theatre (www.tombstonebirdcage.com), where, according to legend, 26 people were killed during an eight-year period. In 1882 The New York Times called it “The wildest, wickedest night spot between Basin Street and the Barbary coast.”
The spirits of those who died violent deaths are said to walk the streets of Tombstone and haunt nearby Boot Hill Graveyard. On weekends, the Tombstone Trolley offers a Ghost and Murder Tour that visits haunted landmarks. More eerie fun can be found on the Gunfighter and Ghost Tour (www.tombstone-ghost.com), a walking tour that visits ghostly places, and at Sister Paranormal, where guests are in for an evening of “spirit contact.”
Each fall the town throws its biggest annual event, Tombstone Territorial Days (www.tombstoneterritorialdays.com), a celebration of Arizona’s military history that started in 1929 and takes place September 19 and 20 this year.
Bisbee
Black Canyon Ranch RV Resort (Good Sam Park)
623-374-9800 | www.blackcanyonranchrv.comDouble Adobe Campground and Shotgun Sports (Good Sam Park)
800-694-4242 | www.doubleadobe.com
Turquoise Valley Golf, Restaurant and RV (Good Sam Park)
520-432-3091 | www.turquoisevalley.com
Huachuca City
Mountain View RV Park (Good Sam Park)
520-456-2860 | www.mountainviewrvpark.com
Tombstone
Tombstone Territories RV Resort (Good Sam Park)
877-316-6714 | www.tombstoneterritories.com