When I first arrived in Grand Teton National Park with my husband, Mark, several years ago, our gaping jaws and wide eyes were like those of all the other first-timers

who were soaking in the beauty of this magical place. The pat phrases, photos and enthusiastic endorsements we’d seen in the travel literature ahead of time hardly did it justice. The craggy, gray mountains soared to breathtaking heights, drawing our eyes ever skyward to the majestic snowcapped peaks, and as we drove the stunning Teton Park Road along their base, we were mesmerized by the constantly changing perspectives on this awe-inspiring landscape. It was nearly impossible to keep our eyes on the road.
But like so many first-timers, we hadn’t allowed enough time to explore the park in depth. We left wanting more, our appetites whetted but not satisfied. 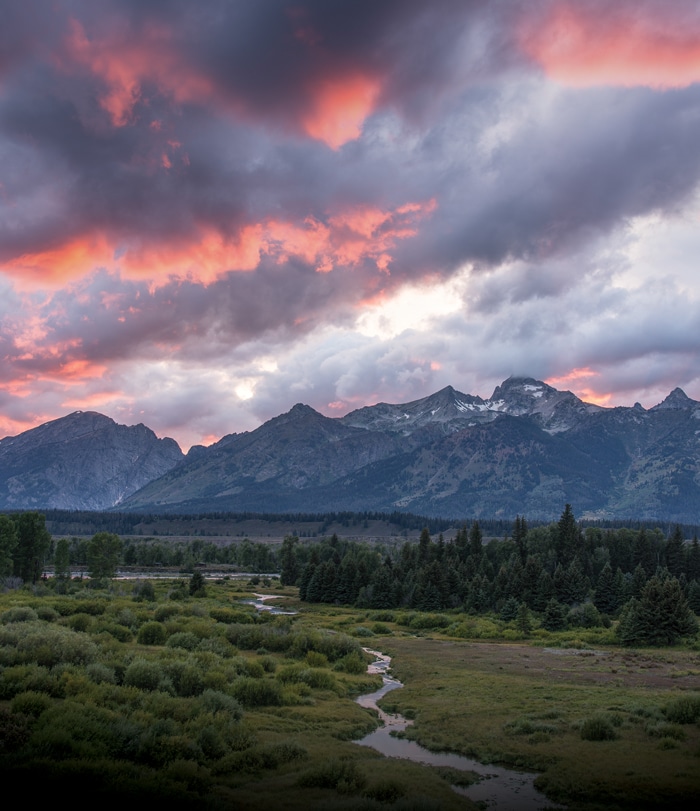 Several days of dazzling theatrics in the heavens, as a storm system rolled through the valley, filled the sky with lugubrious clouds and painted the mountains with light.

Recently, we were lucky enough to return for a nearly three-week stay, and we discovered that this park is loaded with hidden jewels. Vowing not to rush by anything too quickly, we took our bicycles on the paved bike path that winds for miles along the Teton Range, passing crystal-clear mountain lakes on the way.
The bike path was filled with bicyclists of all kinds, from kids weaving all over the place to older couples taking their time to commercial bike vacation touring groups to the local cycling club from nearby Jackson, Wyoming. There was plenty of room for all of us, and the smiles on everyone’s faces gave away what fun it is to ride a bike through some of the most dramatic scenery America has to offer.
We turned off the bike path at the Chapel of the Transfiguration and discovered a charming log cabin chapel that has been holding Episcopal services since it was built in 1925. There was a large bell hanging under an arch outside, and when we tiptoed inside, we discovered that the chapel’s congregation is treated to one of the most ethereal views imaginable as they gaze beyond the altar to the mountains in the distance. What a delight it was to chat with another visitor in the chapel and discover she had been married there several decades ago. I can’t imagine a more picturesque spot for a wedding.
Just a little farther on, we came across the Menor’s Ferry General Store, built by Bill Menor in the early 1900s. The air outside was brisk, so the vintage-costumed National Park Service worker who operates the store (selling fun antique-themed collectibles) was tending the store’s very effective wood stove. She explained that Menor had built a ferry, just steps outside the door, to take people across the Snake River in those days. The ferry is still in operation at the riverbanks today. It is very cleverly engineered to take advantage of the river’s current to propel the cable-based barge from one side of the narrow river to the other. Unfortunately, it was broken when we were there, so we could only admire this marvel of ingenuity at the dock where it was tied to the shore.

A group of horseback riders pause to admire the spectacular view.

Mormons were among the earliest American settlers of this area, and a row of their houses is one of the most popular spots in the park for photographers. There is something about the rustic barn doors set against the imposing backdrop of the mountains that is eminently appealing. When we arrived at Mormon Row, however, the more spectacular view was in the opposite direction. Turning our backs to the mountains, we couldn’t believe our eyes as we watched the summer rains and brooding clouds join forces to create a vivid rainbow that fell from the sky and pierced the ground right between the historic homes.
We were blessed with several days of dazzling theatrics in the heavens as a storm system rolled through the valley. It filled the sky with lugubrious clouds that swept past the mountain peaks and dropped buckets of rain on us now and then. This was the perfect opportunity for some indoor activity, and we headed over to the Laurance S. Rockefeller Preserve.
Grand Teton National Park would not exist today if it weren’t for the phenomenal efforts, vision and philanthropy of John D. Rockefeller Jr., the son of the founder of Standard Oil. Exploitation of oil resources made John D. Rockefeller Sr. the world’s wealthiest man of all time. Adjusted for inflation, his fortune at the time of his death in 1937 has been calculated as $336 billion, dwarfing the net worth of today’s titans of industry. 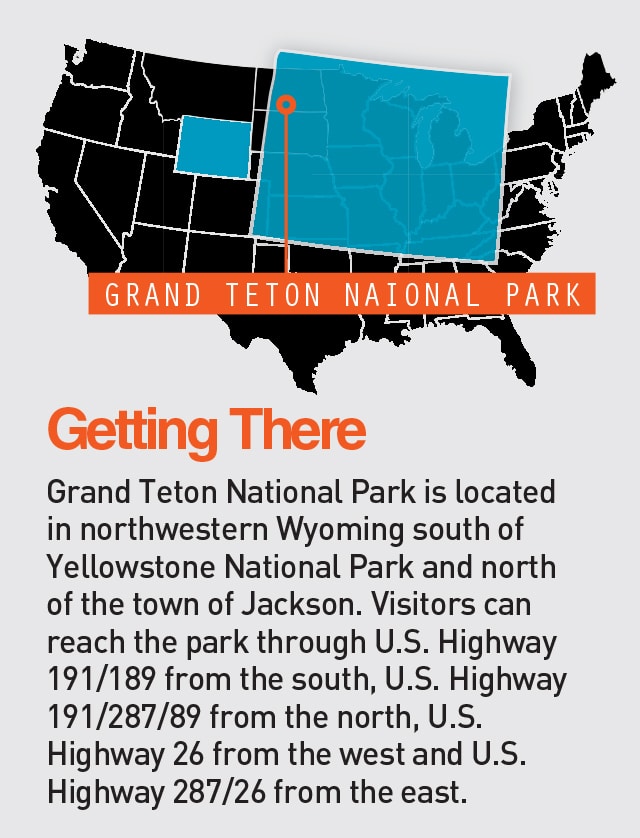 His son, John Jr., first discovered the wild beauty of the Teton Range on a visit in the 1920s. Falling in love with the stunning beauty, over the next decades he bought as much land in the area as possible, with plans to give it to the Park Service to expand the new Grand Teton National Park, which had just been created in 1929. Local residents weren’t happy with the prospect of losing their land, and John Jr. faced an uphill battle with Congress until 1950 when his land was finally incorporated into the park.
The Rockefellers have been an integral part of Grand Teton National Park ever since, and the family of John Jr.’s son, Laurance, has created a unique visitors center in a fully “green” building, seeking to give visitors an appreciation of the park that is more tactile than commercial. Set up like a museum, there is an audiovisual room whose walls are filled with video screens that play engaging vignettes of animals romping in nature and the seasons changing in the park. Another audio-only meditation room offers visitors a chance to close their eyes and listen to the natural sounds of the park played on a large surround-sound audio system. A library offers extensive literature about the park’s history.
In the heart of the park, the Jackson Lake Lodge is an immense building that has 60-foot floor-to-ceiling windows framing the best of Grand Teton’s mountain views. Big, comfy couches are scattered across the massive main room of this visitors center, making it a great place to take a load off, kick your feet up, read some park literature and share your best jealousy-inducing vacation pics with friends back home via free Wi-Fi. The broad deck outside has tables and chairs for enjoying a bite to eat and savoring a view that is so sensational your friends may not believe you – my sister sure didn’t! 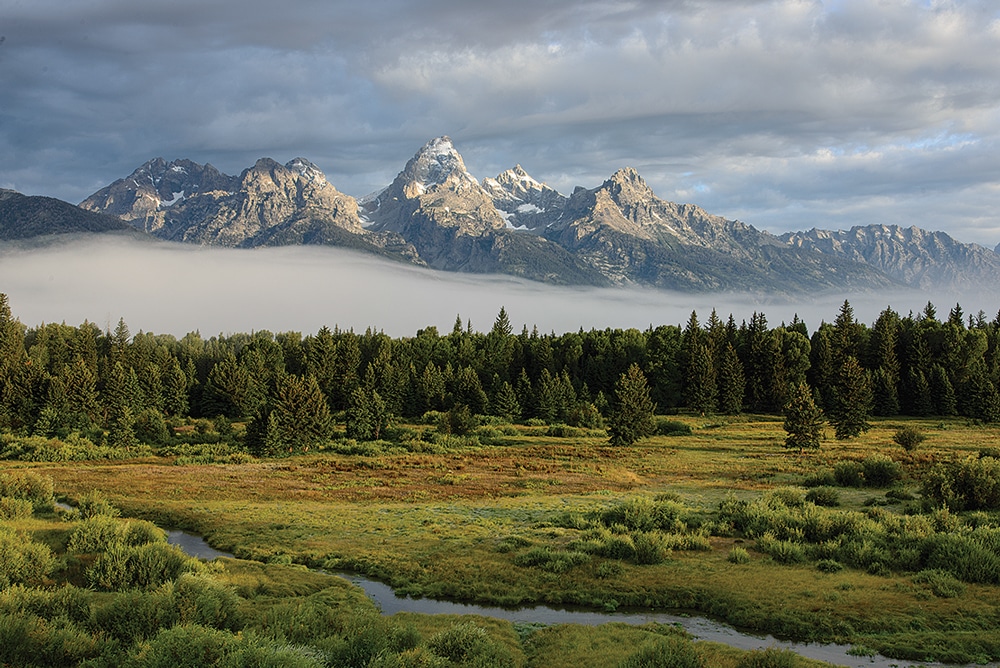 Mist envelops the base of the Teton Mountains under brooding skies.

When the storms subsided, we snuck out before dawn one morning to watch the sunrise at Schwabacher Landing. Fog and mist floated in a veil around the mountains, and as the first rays of the sun appeared, the mountain peaks lit up bright pink, resplendent in the morning light and casting beautiful reflections onto the water. The rain had cleared the air, and the morning was brisk. Haze can sometimes mar the splendor of this park, and wildfires have been known to obscure the views completely. So, we were thrilled to soak in the crisp outlines of the mountains against an azure sky.
Sunset proved to be equally sublime as the clouds turned to fire in the sky in a final blaze of glory at day’s end. But we soon learned that these gorgeous mountain vistas are not the only stars of the show in the Tetons. Exquisite alpine lakes offer heart-melting views as well.
Rising before dawn on another morning, we took a walk along the shores of Jenny Lake. Mist rose from the warm water into the chilly air, and the water created mirrored images of the mountains beyond. A short ferry ride across the water took us to the trailhead for Cascade Canyon. Hikers can make this a daylong adventure out and back along the canyon, but we opted instead for a modest walk to Hidden Falls and a more invigorating climb to Inspiration Point, where views to the east take in the whole valley. 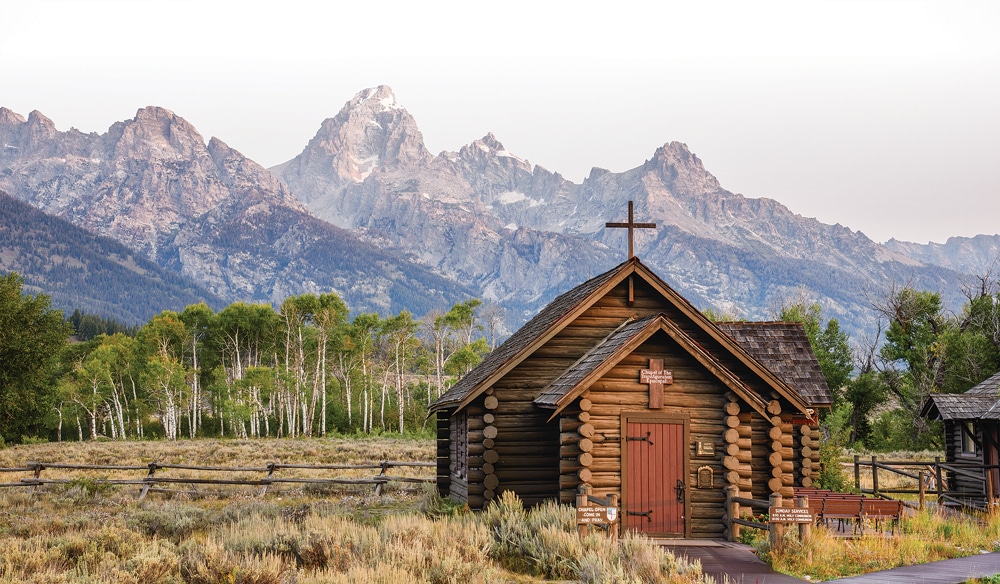 The Chapel of the Transfiguration gives parishioners an awe-inspiring view beyond the altar.

Back on our bikes sometime later, we found an inviting beach with views of sailboats at anchor on Jackson Lake. Kayakers and canoers were enjoying tranquil rides on the water, some in their own boats and others in rented boats. Colter Bay Village Marina is home to boats of all shapes and sizes, including some large cabin cruisers. If paddling your own little boat isn’t your style, an elegant breakfast or dinner cruise on a more spacious power yacht might do the trick!
While we saved a sunset dinner cruise on Jackson Lake for a future visit, we did enjoy a fabulous gondola ride up to The Deck at the Jackson Hole Mountain Resort where cocktails and dinner are served on an expansive deck. We knew we were living large when a live band serenaded us as we quaffed microbrewed beer and gazed out at the immense valley below.
I had always been confused about the identity and location of Jackson Hole versus Jackson, Wyoming. I soon learned that the term “Jackson Hole” refers to the vast valley that runs along the base of the Teton Mountains, both inside and outside the National Park, whereas “Jackson” is the town nearby. A small portion of the southern end of the valley has become home to the world-famous Jackson Hole Mountain Resort, and we were delighted to find that this resort is full of activities in the summer. We enjoyed a terrific raptor demonstration in the Teton Village Commons that was part of their [email protected] summer series of free events. Our hearts stopped as a peregrine falcon dove straight down out of the sky. A great horned owl showed us it could turn its head almost 180 degrees.

While the village of Jackson Hole is a ski resort, the town of Jackson has historical roots that predate tourism to the area. It is built around a classic Western town square, and each corner of the square is marked by an arch made of elk horns that male elk have naturally shed. Nowadays, this town is extremely wealthy and trendy, and the word on the street is that the billionaires have forced out the millionaires. Luckily for those of us whose bank accounts are a lot smaller than that, a stroll through town is free, and a beer at the historic Million Dollar Cowboy Bar where patrons sit on horse saddles instead of stools, is just the price of a pint.
From biking to hiking to photography to restaurants with a view, we loved every minute of our stay in the Tetons, and once again we found ourselves reluctant to leave. Even after three weeks, we hadn’t seen it all. As we drove away and watched the last views disappear behind us, we were already planning our next visit! 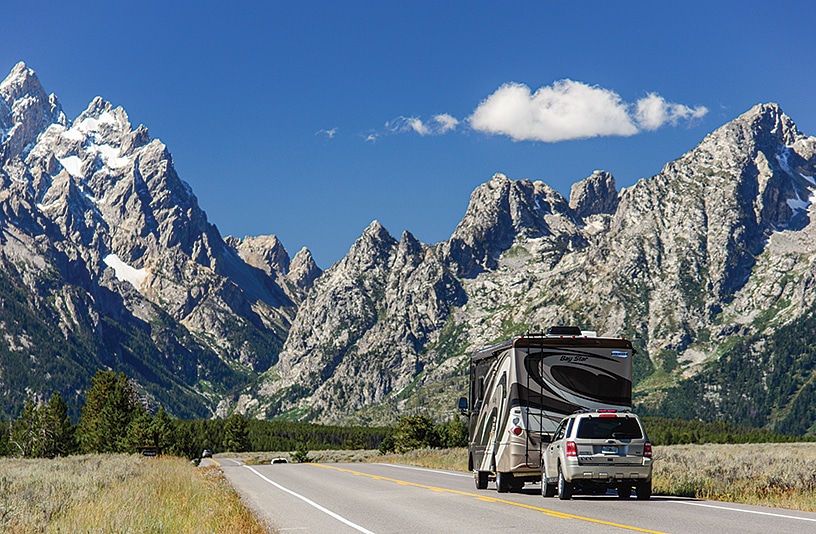 Rental kayaks and a shuttle boat wait for passengers at dawn on Jenny Lake.