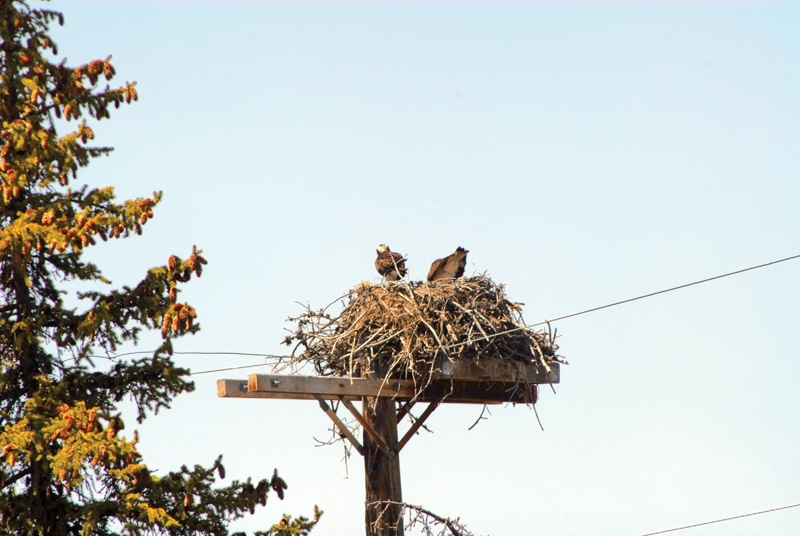 My husband, Guy, and I have visited Grand Teton National Park in northwestern Wyoming a number of times over the years. We always marvel at the rugged beauty of these mountains with mirror-smooth Jackson Lake stretching wide in the valley below. No artist could fabricate a more perfect scene.

Under a bright blue sky, the lustrous 25,540-acre lake could be made of cobalt or mercury, accented by jagged peaks of crystal or silver. With snow on the high peaks, the gray mountains seem more like shadows or gossamer that could simply float away.

On our most recent visit we arrived just after dawn to find the Tetons and Jackson Lake cocooned by a swirling fog. We didn’t lack for entertainment waiting for the fog to lift.

Ospreys tend to their nest on the fringe of the park.

We saw about a dozen or so birds, yellow-headed blackbirds with coal-black bodies and canary-yellow helmets, that had flapped up squawking for food. We and a few other visitors began feeding breadcrumbs and crackers to the little gluttons. They were soon eating out of our hands, but a park ranger drove up and put a stop to it. Feeding the wildlife is not permitted, she said sternly. We complied, feeling sheepish that our feathered friends tricked us into forgetting the rules.

While we usually arrive via Yellowstone, this year we drove in from Dubois, Wy. Our route passed through the Shoshone National Forest, near mountains striated red and yellow and worn to convex cones or stand-alone chimneys.

The route climbs over the Continental Divide, elevation 9,658 feet, and enters the Teton National Forest. Then, through a deep gap in the mountains you suddenly see the Tetons, glittering in the sunshine like crinkled tinfoil in the distance.

You enter the park one of three ways: from the north via the John D. Rockefeller Jr. Memorial Parkway from Yellowstone; from the south at Moose, about five miles north of Jackson, the area’s only major town; and from the east at Moran Entrance Station. The entrance fee, good for up to seven days, is $25 per vehicle (except for visitors with an Annual Parks Pass or Golden Age Passport).

We recommend that the first order of business — rather than enjoying the park’s abundant offerings — should be choosing a campground. While there are seven to choose from, most fill up by mid-morning. All are first-rate, but we’re partial to Signal Mountain Campground for its central location and stunning views of the mountains and lake. A wealth of park literature is available at nearby Signal Mountain Lodge.

From the campground, it’s a short drive south along Teton Park Road to Signal Mountain Road, a steep, narrow, five-mile route that spirals around the mountain through a forest of lodge-pole pines, blue spruce and quaking aspens climbing to the 7,593-foot summit. Trailers are not permitted, but parking is available.

Parked in a lot near the top, an asphalt path leads 200 feet to Jackson Point Overlook, which feels like the top of the world. You look far down into the enormous valley, Jackson Hole, which is rimmed like a cup with snow-furrowed mountains. A diagram at the overlook identifies them as Grand Teton, Mount Moran, Rolling Thunder Mountain and Eagles Rest Peak.

A placard explains that the overlook was named for photographer William Henry Jackson (1843-1942) who accompanied the 1871 U.S. Territorial Survey Expedition to the area and was the first to photograph the Tetons. His images “made tales of the West a visual reality.”

Continuing to the top, where parking is also available, you can see to the southeast, on the valley floor, two side-by-side lakes called The Kettles or The Potholes.  A sign explains they were formed millennia ago as chunks of ice broke off from retreating glaciers more than half a mile thick, and were pushed into the ground. As the ice melted the deep depressions or “kettles” remained, becoming lakes.

Visitors look down on Jackson Hole and Snake River.

The Snake River, dammed in 1905 to enlarge existing Jackson Lake, is a formidable stream up close. But from this high-up vantage it’s ribbon-slim, looping along the valley. U.S. Highway 191, which runs parallel, is the width of a hair, the cars no bigger than pencil points. Off to the northeast, a distant puddle is sizeable Emma Matilda Lake.

If you have the time and inclination, you may want to hike the six-mile (round trip) Signal Mountain Summit Trail, a moderately strenuous trek to Jackson Point Overlook — where the views are worth the effort.

A park brochure lists 15 different day hikes, ranging in difficulty from easy to strenuous. All are most likely worthy, though our three days allowed us time for only three: 2.5-mile Polecat Creek Loop Trail (at Flagg Ranch); 6.6-mile Jenny Lake Loop (a 10-minute shuttle boat ride across the lake shortens the hike considerably); and two-mile Lakeshore Trail (at Colter Bay). These trails are mostly level and considered easy.

Other park activities include biking the park’s nearly 100 miles of paved roads and a lovely eight-mile trail that parallels Teton Park Road beginning at Moose Junction; boating (there are guided cruises and fishing on Jackson Lake and Jenny Lake, and boats and canoes can be rented); float trips on the Snake; horseback riding and wagon rides; and rock climbing. Winter activities include skiing, snowmobiling, snowshoeing and sleigh rides.

The steep bank of Jenny Lake is a glacial dam formed by a glacier that crawled down out of the mountains.

Each week during the summer months, different Native American artisans come to demonstrate their work. On this occasion beader Debbie LaMere, a Shoshone from Idaho, was in the museum making elaborate beaded pendants featuring turtles, bears and others carved from rose quartz, agate, turquoise and white buffalo stone. Her husband, Willie LaMere, sat nearby knapping arrowheads and bird points from green volcanic glass, which he also makes into pendants. He also fashions earrings and other items from seed beads and porcupine quills.

He explains that porcupines, which sprout some 37,000 quills, are caught by the tail and wrapped in a towel, which when removed bristles with quills – they’re barbed only on the business end. The animal is not killed or injured, he said, as “we believe to hurt it would bring bad weather.” The LaMeres are here every season to demonstrate and sell their work.

We had questions about the park, and quickly had them answered by long-time park ranger Laine Thom, a Shoshone-Goshute-Paiute, who was behind the counter at the bookstore. He explained that the earthen dam at Jackson Lake burst in 1910, and was replaced with concrete six years later. Today, the 420-foot deep lake is half again larger than it was a century ago.

Thom was also able to identify the gray, short-tailed rodents we’d seen in such abundance on our hikes and drives as Uinta ground squirrels (named for a Utah mountain range and pronounced “winta”). He said the little creatures are also the architects of the odd, low-arched networks of tunnels ubiquitous through the park.

Over the three days we had also seen an occasional black bear wandering through the area, small herds of elk, pronghorn, mule deer and white-tailed deer. Thom said there would be bison, possibly a coyote or two, maybe even a wolf or moose, not to mention fine scenery along the 22-mile Kelly Loop at the park’s southeast edge.

Black Bears are common in the park.

Along the way the route crosses the rushing Gros Ventre (pronounced “grow vauntr”), a mocha-hued stream speckled white with foam, and passes the Gros Ventre Slide, site of a dramatic landslide that in 1925 dammed the river and created Lower Slide Lake.

As we drove we saw a dozen bison, small herds of elk, dozens of the Uinta ground squirrels and, most exciting, a magnificent creature we were sure at first was a wolf. Watching us all the while, he paralleled our route at a trot some distance from the road, bushy tail straight out, wolf-like, then abruptly peeled off for the Slide. Later, Thom and others, more knowledgeable than we are about Teton wildlife, were sure we’d seen a coyote. Perhaps, but he was much larger than any coyote we’d seen in the Midwest or elsewhere.

Our last park destination was the Craig Thomas Discovery and Moose Visitor Center, the newest (2007) and largest — 21,700 square feet — of the three. Getting there from the Kelly Loop meant crossing the Snake, an imposing 400-feet-wide here, with a narrow strip of land that was thick with reeds and bushes, just offshore. From the bridge I caught sight of a large shape moving among the bushes and guessed it was a moose. We parked, raced back, attracting a crowd of our own as cars stopped and occupants jumped out to see. It was indeed a moose, munching as she nosed along, paying no attention to the 30 spectators on the bridge.

Visitors look at a life-size moose sculpture in the Craig Thomas Discovery Center.

The Moose Visitor Center is a thorough resource of Teton information, with dioramas, a large topographical map, handout literature, an extensive bookstore/gift shop, and an array of artwork, including photos by Ansel Adams and others, paintings by well-known artists such as John Clymer, Don Rodell and Harrison Crandall, and several life-size bronze statues.

Placards tell the park’s history: the Tetons were first given government protection in 1897 when Congress created the Teton Forest Reserve. It didn’t become Grand Teton National Park until 1929, and then at just one-third its size today. Fourteen years later the park was established with its current boundaries.

Placards at the center also include numerous quotes, one by 19th century Western writer Owen Wister (“The Virginian”) that we especially like. He wrote, “Of all the places in the Rocky Mountains that I know, it is the most beautiful.” We might, however, change it to read, “Of all the places anywhere…”