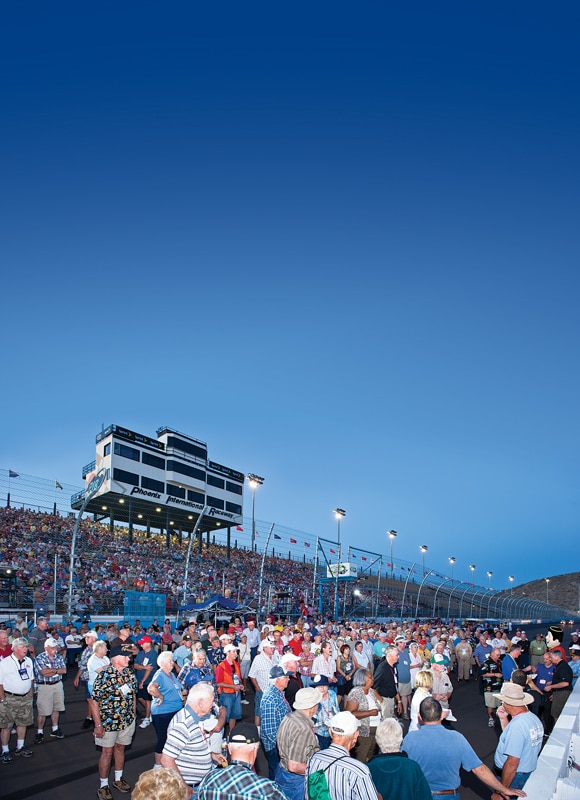 Thousands of happy Good Sam Rally guests from all over the United States and Canada were treated to a taste of Arizona’s sweet early-spring weather, intriguing history and culture, some fabulous entertainment and the chance to make new RVing friends. The sparkling Arizona sun shown down on 3,370 RVs as they spent March 22 through 25 parked at Phoenix International Raceway during the first of the 2012 Good Sam Rallies, presented by DISH.

Opening night on Thursday featured none other than Bowzer of Sha Na Na, who arrived cruisin’ down the track in a 1952 Kaiser convertible. Bill Cosby captivated the audience with his tales and philosophies of life on Friday night. Contemporary country superstar Martina McBride had the audience singing along during Saturday evening’s outstanding feature performance. And on the final night, the audience sang their favorite Beatles’ tunes with the tribute band, Ticket to Ride.

During the day, Rally guests could spend their time attending the 130+ Rally seminars, viewing the new RVs on display and shopping at the giant trade show that was held on-site. And whether Rally goers were seasoned RV veterans or newbies, there were educational experiences for everyone.

Lifetime Good Sam Club members mingle on-track prior to one of the numerous evening entertainment events.

Many of the traditional event programs took place, including the 8th Annual Rally Dog Show, followed by a pet parade, and Camping World’s Match & Win contest, but there were also some new additions. More than 500 veterans marched in the new Veterans’ Salute, separating into their particular branch of service. David Woodworth, America’s leading RV historian and the owner of the world’s largest collection of historic RVs, was on hand to display his 1931 Model A Ford Roadster and 1931 Covered Wagon travel trailer. Both were manufactured in Detroit. Covered Wagon was in its third year of production and would go on to become a major player in the budding travel trailer manufacturing industry during that decade. Good Sam Rally guests were also thoroughly entertained and amused by the horseplay of Dr. Buck’s Wild West Variety Show.

It was no surprise then that while enjoying themselves during the gorgeous weekend in Arizona, Rally guests also gave back, with volunteers cleaning up the nearby Tres Rios Wetlands area, donating nearly $10,000 to Dogs for the Deaf, and lovingly making and donating more than 500 blankets for Project Linus. That’s just the kind of people a lot of RVers like to be.

The next two scheduled 2012 Good Sam Rallies are just around the corner. The Louisville, Kentucky Rally takes place June 21 through 24. And November 2 through 4 is the timetable for the Daytona, Florida Rally, to be held at the Daytona International Speedway. Guests can register for these Rallies (and save money by reserving your spot at both of them), by visiting the Rally website, www.therally.com, or calling 877-749-7122.

Read more about the music in Bob Livingston’s column in MotorHome Magazine where he writes about coming together with an old-fashioned jam session.