Going to the Dark Side 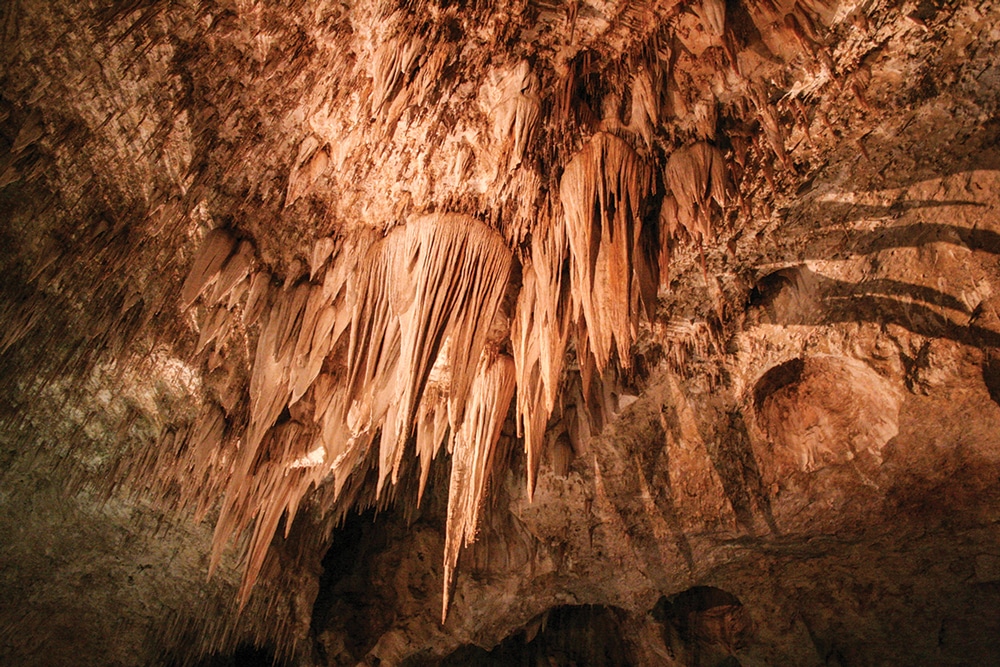 Across America, caves form the backbone of mountain ridges. Some remain wild; others are open for tours. While many of America’s tourist caves share similar characteristics, each has its own story. Consider central Kentucky’s Mammoth Cave, southern Missouri’s Marvel Cave and southeastern New Mexico’s Carlsbad Caverns, three well-known show caves with watery origins and a common history of mining.

Stalactites drip from the ceiling of the Big Room in Carlsbad Caverns, the largest natural limestone chamber in the United States.

Mammoth and Marvel caves were carved over time by rivers, and Carlsbad Caverns by an ancient sea. In Mammoth Cave’s deepest chambers, Echo River and River Styx still flow. Marvel Cave’s two underground lakes are long, and no one has fully explored the lower depths. Carlsbad Caverns, in the arid Chihuahuan Desert, is now dry.
Before they opened for tours, the underground passageways of all three caves were mined for guano deposited by cave-dwelling bats. Miners hauled out tons of nitrate-rich guano at Mammoth and Marvel caves in the 1800s for use in making gunpowder. In the early 1900s bat guano was excavated from Carlsbad Caverns to make a potent form of fertilizer.
Despite their similar histories, Marvel, Mammoth and Carlsbad are very different subterranean chambers, particularly in size. The longest known cave in the world, Mammoth Cave has more than 400 miles of discovered passages, and geologists estimate hundreds more yet to be mapped. Mammoth’s mostly narrow yet sometimes wide passages overlap like spaghetti layered on a large platter.
The Big Room of Carlsbad Caverns, approximately 750 feet under the earth, covers 8.2 acres and rises 250 feet, a space that could hold 14 football fields. With its stalactites, stalagmites and other delicate cave formations, Carlsbad is a world apart from the cactus-dotted desert that lies overhead.
A wet limestone cavern, Marvel Cave lies somewhere between these two national park caves in size and depth. The privately owned cave showcases a dramatic waterfall, sugar-white flowstone as tall as a throne and thin soda-straw stalactites hanging down like icicles.
All three caves lay claim to domes and pits, often described as bottomless. When rocks tossed into the Gulf of Doom in Marvel Cave did not resonate with sound, superstitious locals believed the black hole was a gateway to the underworld. Later explorers discovered that clay and bat guano covered the bottom of the pit’s floor, 100 feet below.

Walking through the natural entrance to Carlsbad Caverns (fees to enter the New Mexico caverns will be waived February 14 through 16, 2015, in honor of President’s Day).

Likewise, a gaping hole in Carlsbad Caverns appeared to be bottomless to early explorers who carried only dim lighting. Measured in later years, the pit descends 140 feet. A cavity overhead, eaten by acidic solution when the cave was filled with water, is named Liberty Dome. The vertical distance from pit to dome is greatest at this point.
The three caves ultimately opened to the public, with Mammoth Cave tours dating back to 1816 and Marvel Cave opening in 1893. James White, often credited with discovering Carlsbad Caverns, took his first tourist party into the subterranean depths in 1922, 21 years after he initially ventured inside. When the three caves opened for tours, all were relatively isolated, with barely passable roads leading to their underground mysteries and fanciful beauty.

Bats, Bears and A Cowboy

Before Mammoth Cave and Carlsbad Caverns became federally protected properties, Native Americans used the underground chambers for shelter, but superstitions and whispered stories kept Marvel Cave a secret deep within the Missouri Ozarks. Osage Indian folklore tells of a young tribal hunter who chased a bear up a wooded mountainside, leaping to a rock ledge to better aim his spear into the bear’s heart. His lunge took him and his prey over the edge and through a dark hole in Roark Mountain. No sound echoed from the deep, black opening. Osage kinsmen slashed sideways V’s in the surrounding trees to warn of evil and called the place Devil’s Den.

Tales circulated among pioneers that Ponce de León had explored Marvel’s depths, seeking his Fountain of Youth and leaving behind caches of gold. However, no recorded person entered Marvel Cave until a lead mining magnate and a few explorers lowered themselves into the dark hole in 1869. Because the explorers believed marble covered the cave’s ceiling, chambers and passageways, it was originally named Marble Cave.
Mammoth Cave, too, carries an ursine legend. As the story goes, at the end of the 1700s, a man named John Houchin spotted a black bear in the Kentucky woods. He shot the bear, and failing to kill it outright, chased the animal until it led him to the mouth of Mammoth Cave.
Did the hunter get the bear? Or did the angry carnivore chase the hunter until he dropped into the sinkhole to get away? No one knows. Houchin gained credit for discovering Mammoth Cave, but the year is still debated — sometime between 1797 and 1802. Ancient bones and charred torches within its passages signify that Native Americans were in Mammoth Cave long before.
Bats, not bears, got the attention of young Jim White in the 1890s as he was mending a fence in the New Mexico desert. At first, the 16-year-old cowboy thought the black plume rising from a hole in the Guadalupe Mountains was a volcano. As he got closer to the crevice, he discovered a swarm of bats as thick as smoke.
Back at his cowboy camp, White gathered up rope, wire and a lantern and returned the next day to explore the opening of what’s now known as Carlsbad Caverns. When he tried to tell the other cowhands about the forest of stalagmites inside the mountain — formations he called “stickie ups,” for lack of a better word — no one believed him. For more than two decades, White explored and promoted Carlsbad Caverns on his own.

Passionate about sharing Carlsbad’s fairyland beauty with the world, White lowered the earliest visitors two at a time into the cavern in buckets that had been used for guano mining. Marvel Cave’s first tours were led by Ozark hill folks and the two daughters of the Canadian entrepreneur who purchased the cave sight unseen in the late 1800s.
Mammoth Cave’s original guides and explorers were slaves. One of the slave guides inspected a “bottomless” pit from top to bottom. Afterward, the cave’s owner ordered a wooden bridge built over what is still called the Bottomless Pit. Today, visitors trek over that deep hole on a strong metal bridge, as soft lighting illuminates the bottom.
Before Mammoth and Carlsbad became national parks and Marvel Cave received national natural landmark status, no one thought much about preserving the fragile stalactites, stalagmites, flowstone, thin stone draperies and crystal formations called popcorn. One guide at Carlsbad Caverns states that many older gardens in the town of Carlsbad are outlined with broken stalactites from the cave’s ceiling. Names and dates etched or burned on cave walls with blackened torches remain evident in parts of the caves.

After mining operations at Marble Cave ceased, the new Canadian owner, William Lynch, took up residence on the woodland property and changed the name to Marvel Cave. Early on, he hired 15-year-old Fannabelle Ford to assist his daughters, Miriam and Genevieve, with guiding tourists. Since the cave served as refrigeration for meals at the guest lodge the Lynches built, Fannabelle carried both food and spring water from the cave’s depths over the debris pile and up a 94-foot wooden ladder to daylight.
Young mountain boys also worked for Lynch, staying on for decades as the land above the cave transformed into the Silver Dollar City theme park, patterned after the old mining town of Marmaros, originally called Marble City. One descendant recalls wages for her grandfather might have been a quarter and an apple.
In contrast, the masters of Mammoth Cave owned their guides, several of whom are credited with discovering new passages. During the early mining days, slaves also hauled the loose soil in the cave to the site of vats where the dirt was leached with water to separate the white, powdery nitrates. A hotel on the cave property served guests. Many banquet meals, prepared in the hotel kitchen, were carried into the cave in baskets by black men and women who served the food on flat rocks.
Music resonated in all three caves. In its Rotunda, Mammoth Cave hosted visiting bands, as well as its hotel’s own musicians. Stories relate that Marion Lynch, trained in opera, had a piano lowered into the Cathedral Room at Marvel Cave and entertained guests with arias. Later, bands of guitars, fiddles and a stand-up bass played in the same large room while folks from around the region danced in naturally air-conditioned comfort.
In the Kings Palace of Carlsbad Caverns, the floor has little evidence of the stalagmites described by Jim White. A guide states that dancers over the years had broken off the formations growing upward toward the ceiling. For three decades, Carlsbad High School held its prom in the Kings Palace.

Round-trip Ticket to the Underworld

Today, the three caves offer guided tours of varying lengths and difficulty, including lantern tours — electric lights are turned off, and visitors view the rooms and formations as early tourists and explorers did.

Mammoth Cave offers a variety of guided tours — Star Chamber, Violet City, Great Onyx and River Styx, among others — that change according to the seasons. One tour passes through dramatic domes and dripstones, and the Wild Cave Tour takes small groups climbing and crawling through less-visited passages. All tours walk in and out, using manmade towers and steps, and reservations are recommended.
Marvel Cave’s Traditional Tour, leaving from Silver Dollar City’s Hospitality House every half hour during its hours of operation, is included in an admission ticket to the 1890s theme park (the afternoon lantern tour requires an additional fee). After the hour-long tour, a cable train transports visitors from an exit point blasted above a flowstone formation in the 1950s.
Among the three caves, Carlsbad is the only one that allows the public to explore unescorted. Elevators whisk visitors down almost 800 feet to an area with a snack bar and restrooms. A short walkway leads to the self-guided Big Room Tour. The Natural Entrance Tour, also self-guided, follows a corkscrew paved trail descending almost 800 feet. Elevators speed visitors back to the visitor center on top.

Rangers guide other tours, giving historical and geological information and briefly turning off all lights to experience the darkness the discoverer, Jim White, described as “tons of black wool.” From May to October, the outdoor amphitheater affords visitors a view of the nightly bat flight. Park rangers present information about the bats prior to their winged exodus from the cavern, typically around sunset.
Caves are America’s underground treasures, preserving cultural and natural history beneath the earth’s surface. Marvel, Mammoth, Carlsbad and numerous other tourist caves around the country welcome visitors to go over to the dark side and experience the magical subterranean world.

A sturdy tower of steps replaced the old wooden ladders at the entrance to Marvel Cave.

Here’s a sample of RV parks and campgrounds near three of America’s favorite tourist caves. For a more complete list, go to www.goodsamcamping.com.