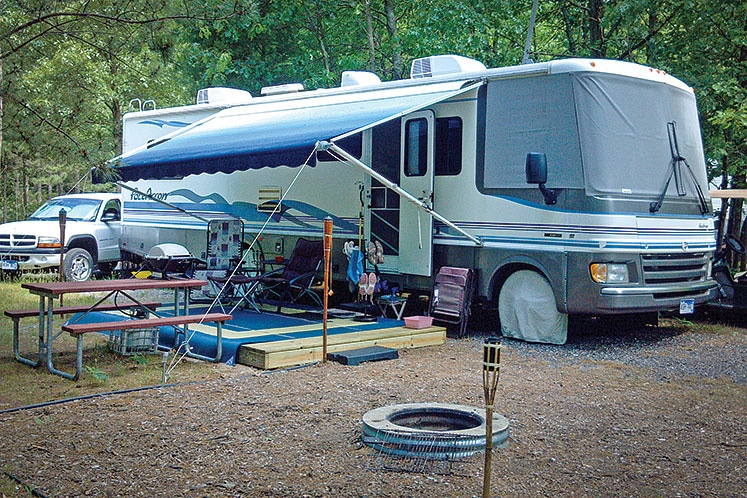 Meet Three Women RVers Who Call the Road Their Home

A few years ago, a single woman living full time on the road in a motorhome was rare, yet today solo RVers are common. They choose to make an RVing lifestyle for various reasons: retirement, divorce, empty nests, fulfillment of a dream – or a calling to adventure.
Once RVing got into Linda Clayton’s blood, nothing could stop her. Traveling first with her husband, she met RVers who introduced Linda to the concept of combining RV travel with work. Despite holding her dream job as an optician for a children’s clinic, Linda and her husband sold their house and most of its contents and started their adventure. Unfortunately, the marriage ended in less than a year. But it was too late for Linda to turn back.

Linda Clayton named her motorhome “Myrtle,” after her grandmother.

“I decided to buy my own motorhome and named it ‘Myrtle,’ after my grandmother,” she says. “I traded my vehicle for one I could tow ‘four down.’ I knew I could never make the kind of money I had earned as an optician, but I wanted to try work-camping.”
Linda and Myrtle have full-timed ever since. Linda first worked at Iowa’s Saylorville Lake as a custodian in a day-use area for the U.S. Army Corps of Engineers (USACE). Later, she volunteered for the USACE in Alabama.
For two winters, Linda lived at a mobile home park in Apache Junction, Arizona, and worked in the office and as a gate attendant. On weekends, she sold items for a vendor at the Mesa Marketplace Swap Meet.
In between winter and summer jobs, Linda worked two peak seasons for Amazon.com in Campbellsville, Kentucky. She recently trained as part of the Amazon CamperForce Away Program, teaching the receiving (products) job to new associates. Her trainer job ended in time for her to return to Amazon.com in Campbellsville – likely as a picker of products for orders in the company’s fulfillment center.
When she worked summers at an RV park in Michigan, her oldest granddaughter joined her for one season. “I taught her how to run the honey-wagon pumper,” Linda says. “People felt sorry for her and gave her tips. Funny, I never got tips!”
Linda keeps company with her two “boys,” dogs Rags and Brutus. Rags is Linda’s kayaking buddy. She owns two kayaks and enjoys time on waterways wherever she travels. She also likes to hike and hunt for mushrooms. “I love most of this beautiful country,” she adds. “But for me, the best part of RVing is the great friends I meet along the way! I call them my RVing family.”

Linda’s advice for solo women who want to RV: “If I can do it, you can do it! Don’t be intimidated by driving, towing, or anything related to the RV. I think most women are better than men at driving and parking RVs. Seriously!

“As for work-camping, if you are a hard worker, some employers who advertise for couples will give you a chance to prove yourself. However, it is definitely harder to earn a living for those of us who aren’t yet receiving retirement income.
“I love the RVing lifestyle, even though I’m so poor right now I can’t pay attention,” she sums up. “Yet, I can’t make myself get off the road and go back to a ‘normal’ job – such as an optician.”
Mary Ann Brazee, another full-time solo RVer, also supports her lifestyle by working. She views each of her jobs with a “Star Trek” mentality – stepping out into the unknown and going with it. Some jobs are a bit more “Trekish” than others, she admits.

“I set a goal to work as many national parks as possible and I checked off Yellowstone, Death Valley, Bryce Canyon and the Everglades.”

Making her home in Michigan for 35 years and raising two sons, Mary Ann visited a friend who worked in Yellowstone National Park. “That’s all it took to get that itch,” she says. “I had been divorced for several years and had reached my highest level working in a shoe store. I love to travel, and jobs in national parks appealed to me.”
However, without retirement income, Mary Ann needed steady employment. She applied to the park’s concessioner, Xanterra Parks & Resorts, and took her first position in Bryce Canyon, working retail in the camper store. When winter snow fell, Xanterra transferred her to Death Valley National Park. During those first years, she lived in company dormitory housing and traveled in a conversion van.
“After my stint in Death Valley, I knew this lifestyle was for me, so I sold my house in Michigan,” she says, laughing about becoming “homeless.”
“Since I was not yet on Social Security, money got pretty tight,” she says. She ultimately wanted to work in Everglades National Park. Xanterra had openings, but no housing for those without an RV. (Later, Xanterra provided housing and Mary Ann worked two seasons in the Everglades.)
However, in Florida, she discovered jobs at the Fort Myers International Airport with Delta Air Lines and Continental Airlines. Mary Ann handled baggage, rode on the cabin service truck that lifts workers up to restock and clean up the airplane, and waved flags to guide planes into position on the tarmac. “Isn’t that cool?” she asks, her brown eyes sparkling. “My airport jobs!”
The airlines gave a bonus to employees who completed their contract. “That was about $1,000 extra – enough to buy gas to get me back to Death Valley to work again for Xanterra. I set a goal to work as many national parks as possible and I checked off Yellowstone, Death Valley, Bryce Canyon and the Everglades. Later, I added Shenandoah during the fall shoulder season for concessioner Aramark.”

When Mary Ann reached official retirement age, she purchased her Class B Rialta motorhome. “Everything I own – my whole life – is in that motorhome,” she says.

While at Death Valley, a co-worker told Mary Ann about jobs at Amazon.com. She applied to the fulfillment center in Coffeyville, Kansas, working the months prior to Christmas. At the end, she visited her son, who was stationed at the Army base at Fort Leavenworth. “The opportunity to visit family and friends is a perk to my lifestyle,” she says. “Sightseeing is another bonus.”
A friend she had met in Death Valley invited Mary Ann to make her home base at her house in Orange Park, Florida. Again, Mary Ann set out to find a job for the winter months. “An ad on Craigslist told about a job at a marina in the Everglades. I rented kayaks and canoes and oversaw the sale of fuel for the few houseboats left there after a major hurricane. It was a lucky find!”
All the while Mary Ann transitioned to full-time RVing, figuring out her residency, mail forwarding and how to pay bills online. However, when her job at the Everglades marina ended, she still needed to work for a month until her next job started. “Another lucky find,” Mary Ann says. “I worked through May taking the 2010 census.”

Now, five years into her work-camping career, Mary Ann considers Amazon.com her major employer. “I keep pushing for earlier seasons with the company, working recently at Campbellsville,” she says.

Mary Ann prepared herself with experience in national parks and by heeding the advice of her work-camper friend. However, her “Star Trek” mindset finds various jobs throughout the year. One fall, she tried the sugar beet harvest in North Dakota. The beet harvest did not work out well; still, she counts it as an adventure. With her grit, experience and willingness to step into the unknown, another lucky find always turns up.
Life handed Joy Ethridge a bag of lemons – the end of a 31-year marriage and the “loose ends” that followed. She could have pulled herself inside a warm hoodie while life passed by, but Joy’s name signifies her personality. Despite her heartache, she dispersed more than three decades of “stuff” and sold her house. With no experience, she bought an RV and looked for jobs on the road. After answering an ad for a waitress outside Big Bend National Park, and landing a summertime job at Adventureland Amusement Park in Altoona, Iowa, Joy set out for a new life that now spans a decade and many states.

“The combination of working and RVing has allowed me to go to different places and do things I would have never been able to do otherwise.”

“I remember like yesterday pulling into my first job,” she says. “The ad described a resort, but it looked like a convenience store. I had to give myself a big pep talk before going inside.” However, the job turned into a good experience. Joy found that as a waitress – a job she had never done – she enjoyed interacting with locals who resembled characters out of a Western movie.
After Big Bend, Joy headed for Adventureland to oversee games. “That first summer on the road I met work-camper friends who became my extended family,” she says.
Before Joy left the amusement park in September, co-workers offered her a job on their team for See’s Candies in Fort Worth, Texas, prior to Christmas. See’s is a California-based company with kiosks in malls. “I was not thrilled with my uniform – an old-fashioned white dress with a big black bow,” she says, “but giving out candy samples all day is fun.”
Joy later traveled to Yellowstone National Park to work at Grant Village General Store where elk roamed in the employee campground. “It was not my dream job, but living in Yellowstone for a summer made up for the hectic pace,” she says.
Joy took several jobs in KOA Campgrounds traveling from Niagara Falls, New York, to Bozeman, Montana, to Lake Conroe, Texas, to Boston/Cape Cod. In addition to her office duties at Bozeman, she supervised tie-dyeing of T-shirts with guests each Saturday morning. She often heads back to her home turf in Texas for winters. Once traveling Interstate 10, she stopped at Fort Stockton RV Park. “The owner offered me a job and I ended up spending the winter there,” Joy says.
In her off time at Lake Conroe, she took square-dance lessons and attended a big “Go Texan” event in one of the park’s ballrooms. New experiences and challenges are some of the pluses in her lifestyle.
Like Linda and Mary Ann, Joy has worked three seasons at Amazon.com in Campbellsville and Coffeyville. Currently, she works at her “dream job” in the bookstore at Mount Rushmore National Memorial.

Joy Ethridge at her dream job – working at the Mount Rushmore bookstore.

Although Joy, Linda and Mary Ann are not acquainted, each of them ended one life and began a totally new one. “The combination of working and RVing has allowed me to go to different places and do things I would have never been able to do otherwise,” Joy says. “The people I’ve met along this journey have so enriched my life.”
Enrichment goes two ways. Joy, Linda and Mary Ann give back to those they serve and work beside.

If solo RVing had a poster to encourage others to take a leap onto the road, the smiling faces of these three women who found their niches would be front and center.