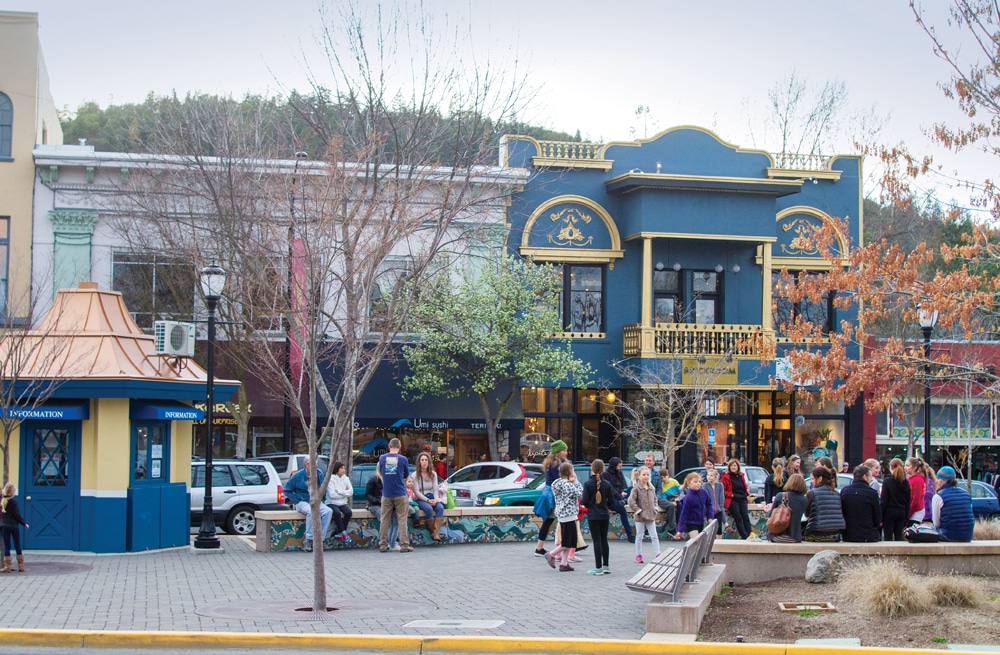 Wine, chocolate and cheese combine with quaint charm and a famous theater scene during late winter in this southern Oregon river valley

When RVers explore southern Oregon’s verdant Rogue River Valley, it’s often in the summer months, when they can fish and whitewater raft the area’s wild rivers, hike in the mountains, cycle to wineries along winding valley roads or take in plays at the world-famous Oregon Shakespeare Festival. We decided to head to this popular destination in March, just at the close of winter and the beginning of spring. And we were surprised at just how lively and fun the “quiet” season is here in the land of the wild Rogue River.

As is often the case in our busy lives, we don’t leave Portland, Oregon, until after work around 6 p.m. It doesn’t take long before we’ve put city traffic behind us. The Rogue River Valley is about five hours south of Portland, and just a hop from the Oregon/California border. The valley is an oblong bowl surrounded by three mountain ranges: the Cascades, the Siskiyous and the Coast Range. Interstate 5 cuts through the heart of the valley, making it easily accessible for RVers and, this evening, we make great time, quickly ticking off towns like Salem, Eugene and Roseburg.

It’s late when we pull into Valley of the Rogue State Park in Gold Hill between Medford and Grants Pass. Perched at a bend in the Rogue River just off the freeway, this is a big campground with plenty of trees and more than 85 paved full-hookup RV spaces (23 pull-through sites) with fire rings and picnic tables, and we easily find a cozy space for the night. The park also offers flush toilets and hot showers and, while we’re just passing through, we make a note that river access, a 1¼-mile hiking trail and an accessible 3½-mile trail (part of the Rogue River Greenway Trail that will eventually link Grants Pass and Ashland) make this a great spot for spending more time.

Residents and visitors alike gather in a downtown Ashland square.

We wake to sunny skies and, after a leisurely riverside breakfast, jump back onto I-5. About 10 miles southeast, we turn off at Central Point, a quaint farm town that still boasts a working downtown grain elevator. It’s also home to Rogue Creamery, an award-winning, family-owned artisan cheesemaker. We pull into the ample parking lot the creamery shares with Lillie Belle Farms chocolates and Ledger David Cellars wine-tasting room (what could be better – cheese, wine and chocolate?).

In the cheese shop, we’re immediately enveloped by the musky smell of blue cheese. Rogue Creamery sells cheese from all over the world and it makes cheddar, TouVelle (a type of American cheese) and its famous blue cheeses. Today, the creamery is sampling several blues, and I’m captivated by creamy, tangy Caveman Blue, so I pony up $10 for a small sliver for the road. We also order a grilled-cheese sandwich to split, a bargain at $5.

We head out Hanley Road, passing through farm fields and rolling hills studded with oaks. While the temperature is still cool, signs of spring are everywhere – sunny daffodils poking through the moist soil, willows greening up and fruit trees dressed in a riot of pink and white blossoms.

We’re headed to the Jacksonville Historic District, site of one of the first placer gold claims in the area. After gold was discovered here in 1851, Jacksonville flourished and was, for a time, the county seat. Beautiful Victorian homes and brick commercial buildings, including an impressive courthouse, sprung up. However, by 1884, the gold deposits were played out and the railroad bypassed the city. The economy slowed, and time seemed to stop here. Today, Jacksonville boasts more than 100 historic buildings, many of them trendy boutiques, antique shops, restaurants and coffee shops.

We park the motorhome in an RV-designated lot a few blocks from the center of town and walk along wooden sidewalks, peering inside well-preserved buildings and greedily snapping photos. After picking up a coffee and a cookie at GoodBean Coffee, we browse through fun antique shops and housewares stores.

We also hike a few blocks and up a steep road to the Jacksonville Historic Cemetery. This shady, 30-acre site is where some of the area’s earliest pioneers are buried, including Margaret Love, the first person interred here in 1859. Jacksonville’s cemetery is divided into several sections reflecting the city’s early cultural divisions: Jewish (Hebrew), Catholic, Independent Order of Odd Fellows, Ancient Free and Accepted Masons, Independent and Improved Order of Red Men, and the City section. Within the City section is Potter’s Field, which houses the remains of blacks, poor whites, Native Americans, Hawaiians and Chinese. While most sites within the cemetery have headstones, some quite elaborate, none of the 133 graves in Potter’s Field have individual markers.

Back downtown, we pop into the Umpqua Valley Wine Tasting Room to sample some local wines. The winemaker suggests we come back in the summer to experience Jacksonville’s Britt Festival, a seasonal music festival that takes place at an open-air amphitheater. Named after pioneer photographer and Jacksonville resident Peter Britt, the popular concert series draws national pop, country, alternative and contemporary music acts. 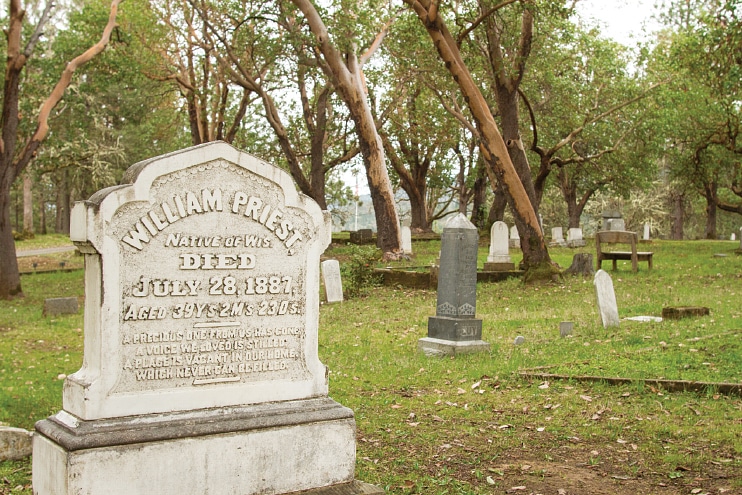 The Jacksonville Historic Cemetery provides a fascinating snapshot of the area’s past.

We drive a half-hour south to Ashland, a quaint, walkable town that’s home to the world-famous Oregon Shakespeare Festival (OSF). We’re coming back this evening, but the city’s narrow streets aren’t RV-friendly, so we head a few miles out of town to Emigrant Lake County Park and The Point RV Campground. This reservoir-based RV park is right on the water and, at this time of year, we have our pick of flat, blacktopped full-hookup spaces, complete with grass, a picnic table and a fire ring, all for $30 a night.

After kicking back and enjoying our lakeside view for a while, we drive the dinghy to the Chocolate Maker’s Dinner at the historic Ashland Springs Hotel. One of the reasons we came to the Rogue River Valley in March is the Oregon Chocolate Festival (March 3-5, 2017). This is one of the best celebrations of chocolate in the Northwest. As serious chocophiles, we know that the first night’s chocolate-themed dinner is just the start of the fun.

Back at the motorhome, we collapse in a chocolate haze and wake the next morning to steady rain. No troubles because this is when we plan to attend the Oregon Chocolate Festival at the Ashland Hills Hotel & Suites just a few miles from Emigrant Lake.

The festival is a riot of chocolate goodness. More than 30 chocolatiers and pastry chefs from Seattle to San Francisco have come to show off their wares. There are chocolate truffles, bars, bonbons and more to sample. We also attend a number of chocolate seminars and demonstrations by chefs and chocolate experts, including classes on pairing chocolate and craft beer, making chocolate cheesecake bonbons and exploring chocolate from around the world. In the afternoon, we vote for the best chocolate dessert and, my favorite, Black Truffle Dark Chocolate Molten Lava Cake, takes home top honors. 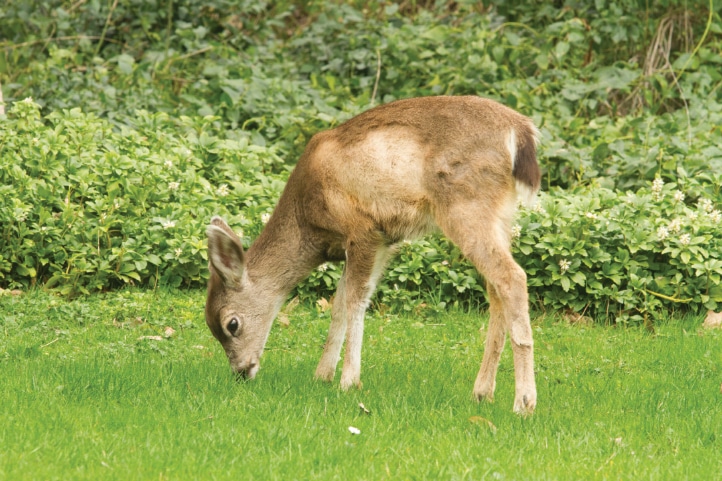 The next morning, we’re grateful for cool, dry weather because we have reservations for a 90-minute backstage tour of the Oregon Shakespeare Festival, among the oldest and largest professional nonprofit theaters in the United States. Our guide, David, tells us that outdoor theater began modestly in Ashland in 1935 as a Fourth of July celebration. No one thought performing Shakespeare would be a hit, but the naysayers were wrong. Today, during its 10-month season, OSF employs 80 actors and 550 costumers, technicians, stagehands and others, including countless volunteers, to put on 800 plays for more than 400,000 guests.

David takes us behind the scenes, where a crew busily assembles a set, sound engineers adjust equipment and directors and stage managers confer over laptop computers. He tells us, during high season, theaters may change sets five times a day and that crews have only 2½ hours to get the work done. We head downstairs into the theater’s bowels, peering into costume shops and wig and makeup studios. Finally, we step backstage and then onto the stage of the renowned outdoor Allen Elizabethan Theatre, where most of the Shakespearean productions happen. It’s a thrill to imagine captivating audiences on this stage.

We bid David adieu and walk a few blocks to Lithia Park, a long, skinny urban oasis right in the middle of town. This shady, 93-acre park, filled with play structures, green spaces and a burbling creek, is a perfect respite during the valley heat. Today, it makes a great place to stretch our legs, and we work up a sweat hiking a couple of miles on the uphill trail.

We grab a quick burger at the RedZone Sports Bar & Grill before stopping at the Oregon Shakespeare Festival Welcome & Education Center to admire some elaborate costumes. An enthusiastic volunteer gives us the OSF season schedule, and we walk a few blocks to the Thomas Theatre, where we have tickets for “The Yeoman of the Guard.” The theater is intimate, and every seat is a good one. This Gilbert and Sullivan comedy has been reinvented with a Western theme, and it’s rollickingly funny.

It’s been a full day, but before we head to the motorhome, we want to check out the valley’s thriving wine scene that Wine Enthusiast magazine named one of the “10 Best Wine Travel Destinations.” There are at least eight wineries on our Rogue Valley wine map and even more in surrounding valleys. We could spend an entire day driving from winery to winery or, better yet, book a wine tour and let someone else do the driving.

We stop at Weisinger Family Winery, on U.S. Highway 99 just south of town. As we taste the wine, the staffer tells us they began growing grapes as early as 1978 and bottled their first wine 10 years later, making them one of the oldest wineries in Ashland.

We gaze out at the surrounding grapevines realizing there are many more wineries to explore, plays to see and fascinating history to discover here than time left on this trip. We can also look forward to rafting rivers, catching fish, attending music festivals and hiking and skiing the mountains in the Rogue River Valley. So we clink glasses of mescolare, a smooth blend of grenache, cabernet and merlot, in a toast to the Rogue River Valley. We know we’ll be back – winter, spring, summer and fall.