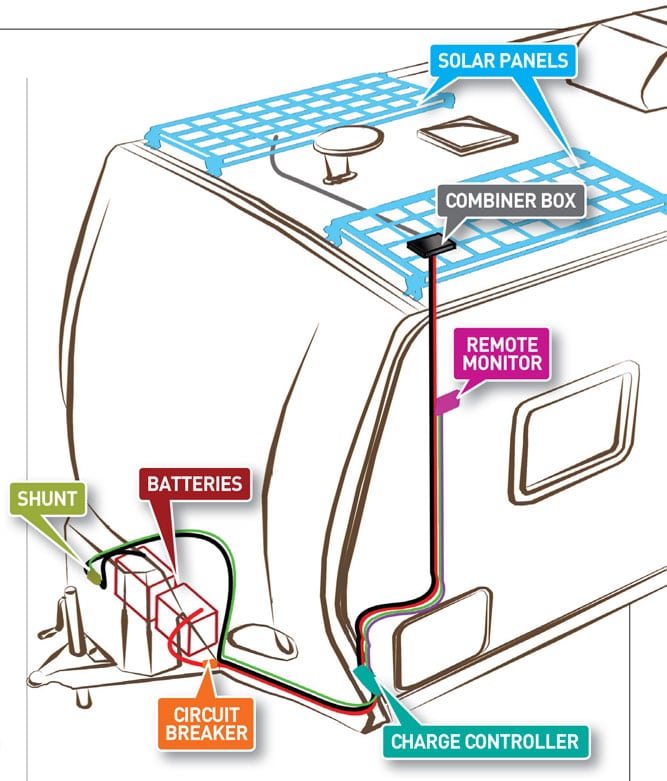 When we head out with our trailer, a good percentage of the time our destination is off the grid. We do some boondocking, but there are also the music festivals, hockey tournaments and other outings that aren’t out of town but are without hookups nonetheless.

Our Powerhouse generator is working great for us in most situations, but we also wanted to look into getting some free power from the sun. We were invited to check out a solar-system-install in Springfield, Oregon. Not only did we get to experience the install, we learned a lot about solar-system efficiency from AM Solar President Greg Holder.

First of all, demand for RV solar varies with how RV owners use their vehicles. “I try to find out what it is they want to do and that helps me size the system,” says Holder. Some just want to maintain the batteries while the RV is in storage. This takes about 100 watts for a trailer and 200 watts for
a motorhome.

Next comes the conservative off-grid user. They use the light where they are sitting and turn it off when they move. They’re not running their microwave, toaster or blender. This type of user can power up with about 200 to 300 watts with 200 to 300 amp hours of battery capacity.

The more liberal consumers turn on more lights, watch TV, turn on a 2,000-watt inverter and operate the microwave. They will need 400 to 600 watts and corresponding battery capacity.

Next comes what Holder calls “hard-core boondockers.” They might be full-timers or have an office onboard and they consume a lot of power with additional uses, such as satellite Internet with their computers and TV. “Some of the bigger RVs have residential-style refrigerators that run on 120 volts AC, which means you don’t have the propane option, so you have to leave your inverter on 24 hours a day just to run the fridge,” says Holder. “These owners end up with 1,500 to 1,600 watts, whatever can fit on the roof.”

For those who want to fine tune their requirements, Holder suggests installing a shunt and an amp hour meter to record actual use. He also advises new solar users to install a large enough infrastructure in terms of wires, switches and controllers so the system can be expanded by adding more solar panels as needed.

Another way to ensure the best solar-powered perform-ance is to improve the efficiency with batteries, controls and wire gauge.

Improved battery performance means you can achieve your power goals with less solar-panel output, but Holder suggests “using up” existing batteries as you learn to use your sun-powered system. Such practice can damage expensive new batteries if charge levels drop too low.

A big part of wiring efficiency is achieved with AM Solar’s combiner box, which connects the 10-gauge wire from each solar panel at a bus bar that combines the panel power into a heavier-gauge wire to transmit the energy down to the charge controller. If wire gauges are too small or transmission distances are too long, voltage drop zaps a lot of energy from the system. Other wire characteristics that affect efficiency include solid or stranded, metal type and use of conduit. Prior to combiner boxes, panel wires were daisy chained together, which was both inefficient and destructive as the combined power could melt components.

Most RV solar panels are made with crystalline technology using silicone crystals. Cells are either multi-crystalline or monocrystalline. The monocrystalline panels are more efficient in low light conditions such as early morning or cloudy days. However, 90 percent of a day’s charge happens in two or three hours on either side of solar noon so multi-crystalline modules work well in normal conditions and are slightly less expensive. In addition to monocrystalline construction, efficiency can also be improved with a back contact design that eliminates the silver lattice work on the front that shades some of the panel.

Yet another efficiency gain comes from using “hotter” cells to make each panel. Cells are flash tested and grouped together by output quality so the exact same size module might come in 85, 90, 95 and 100 watts. The difference besides output? Price. More watts cost more money.

If the target output for an RV solar panel is 100 watts, improved efficiency really results in smaller, lighter panels. When roof space is at a premium, smaller panels can produce the power but at a price premium.

Other components can also contribute to the efficiency of the solar charging system and improve battery life. Battery temperature sensors, charge controls with pulse width modulation, and maximum power point tracking all contribute to “extracting the maximum power out of your solar panels and delivering it in a form that your batteries want,” says Holder.

Follow the guide below to see how to install a solar system!