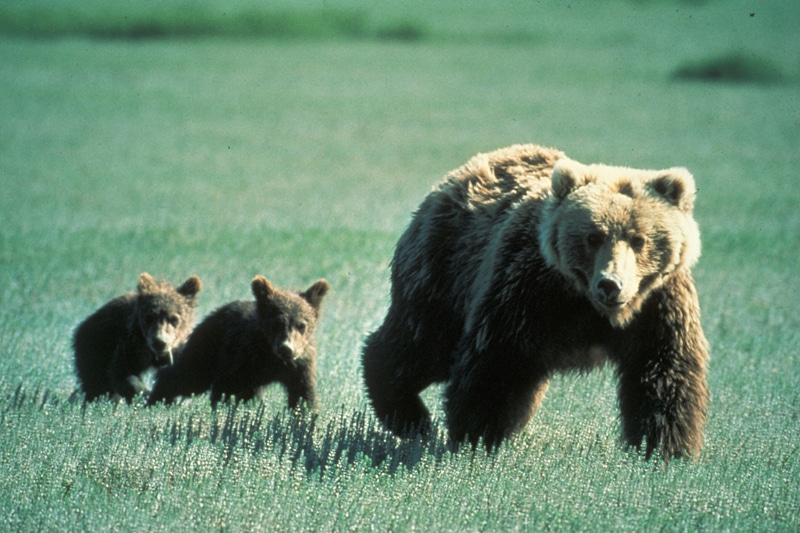 As adventures go, I wasn’t expecting much. After all, I had been told the two-and-a-half-hour excursion I’d be taking required participants be at least 54 inches tall and at least 10 years old – the kind of restrictions enforced at amusement parks, not in the great outdoors. Sporting endeavors worth sweating through generally employ a principle similar to caveat emptor – participate at one’s own risk.  And, before you start, please sign this waiver form.

After taking a short ride from the village at Montana’s Whitefish Mountain Resort to a canvas tent called Cougar Camp, a name earned when two cougars leapt from the tent one morning, I began to reassess the forthcoming activity called Walk in the Treetops. When our guide, Inge, pointed to a wooden pole and told us a grizzly bear left the huge gashes in the wood, I knew my second cup of coffee had been superfluous – I was now wide awake. A married couple from Seattle and I were soon fitted with climbing harnesses attached to stout ropes, which were outfitted with specialized contraptions that would secure us to the steel cables that run from tree to tree.

This will be no Disney ride, I thought, and then set out on the half-mile hike to the start of our elevated, arboreal endeavor.

View From The Top

As intense as the buildup was, however, the Walk in the Treetops proved to be as wonderful and unique as the entire Glacier National Park region. The area offers plenty of hardcore outdoor activities for travelers so inclined, but RVers seeking nothing more adrenaline-inducing than gawking at nearly unending scenery and watching wildlife forage through untrammeled terrain can easily stay entertained for a week here. Travelers willing to test the limits of their comfort zones – to raft the Middle Fork Flathead River, to hire a guide and float in a drift boat in search of native west-slope cutthroat trout or mountain bike on single-track trails through forests thick with grand fir and cottonwoods – will be hard pressed to find better adventures than those in Glacier Country, Montana.

On the hike to the platforms, Inge proved so enthusiastic about the bear grass, devil’s club, thimbleberry and wild ginger, among many plants along the trail, that I was forced to admit my botanical knowledge allowed me only to distinguish a shrub from a tree.

We soon stepped onto a platform, hooked onto the cables with our safety ropes (which would prevent us from falling), and began our walk in the trees. We carefully stepped on boards that were suspended below the safety cables; though to call the tilted, bouncy surface a boardwalk would be inaccurate. The walkway seemed far less stable than it proved to be and it was inevitable that one or all of us would make a Tarzan reference.

The walkway, on average, is suspended 30 feet above the forest floor, with a high point of 70 feet in the trees. Travelers with a fear of heights would be wise to find their outdoor thrills elsewhere. I thoroughly enjoyed the soft adventure that Walk in the Treetops provided. Since I have never experienced anything like it, I believe most travelers will at the very least appreciate the novelty of the activity. The entire elevated route covers only 800 feet, but it’s a distance I’ll fondly remember.

A couple hours later I found myself pedaling a mountain bike up the trails that cross the slopes of Whitefish Mountain. The resort’s chairlifts were being updated, part of the recent transition from what used to be called Big Mountain Resort, and I was grateful for the exercise. I hopped on a rental bike, provided by Snow Ghost Outfitters, located in the village of Whitefish Mountain Resort, and slowly fought gravity as a guide named Michal from Snow Ghost Outfitters pedaled in front of me, providing commentary and cheering me on. My mountain-biking experience is limited, so I was grateful the route was not too extreme.

Whitefish Mountain’s best asset in regards to mountain biking is its variety. As Michal put it, “We offer terrain for novices as well as experts. We have the skills park, which uses a lot of the new-age ladders, a lot of drops, things oriented purely towards downhill.” From my novice point of view, the skills park looked like a place where lemmings came to their untimely ends, a perception that reinforced the feeling that my mountain biking skills have plenty of room for improvement.

Since I love unusual experiences and soft adventures, my smile seemed permanently affixed. Yet my stint at Whitefish Mountain Resort was a bonus, since Glacier National Park had truly drawn me to the region. The town of Whitefish sits just down the hill from the resort, and visitors can shop in boutiques and galleries, golf on two championship courses or indulge in fine dining. I, however, had a national park to explore.

An hour or so of driving east on U.S. 2 through quiet small towns and past more RV parks than I can remember seeing in so short a stretch deposited me in West Glacier. That summer day the small tourist hub on the western edge of the park was abuzz with travelers from around the world, each trying to decide how best to spend time in the park. The Middle Fork Flathead River beckoned to a high percentage of the visitors, so they signed on for a river float with Glacier Raft Company. Other travelers laced up their hiking boots, then studied maps trying to decide which of the more than 730 miles of trails to explore.

As I ate lunch in a small cafe, a man at the next table asked me if I could recommend a fishing guide who could “put [him] on some Montana trout.” Lakestream Fly Shop in Whitefish could meet that objective, I told him. In a souvenir shop, two German tourists asked a sales clerk about the effectiveness of the bear bells the shop sold (not very effective, came the answer; hiking in groups is far safer, and carrying bear repellent also makes sense). Grizzlies and black bears roam Glacier, but hikers are not likely to encounter any ursine creatures among the park’s million-plus acres if they take precautions.

Visitors who want to encounter bears, however, should take a Red Bus Tour. In fact, I highly recommend that everyone who intends to explore Glacier sign up for one of the 11 tours. Ranging from two-and-a-half to nine-and-a-half hours, these tours provide context to the scenery travelers might otherwise see but are not likely to understand. The drivers deliver commentary on the flora and fauna, the migration and dissolution of the glaciers that carved the valleys, plate tectonics and the establishment of the park. They communicate with the drivers of other buses about where wildlife is located, and answer questions from curious tour-takers.

Yet as fascinating as the drivers are, they are not the stars of the Glacier National Park show; the scenery and the buses share the marquee. In order to deliver the best perspective for taking in the park’s soaring peaks and hanging valleys, the White Motor Company built 25-foot long touring coaches that seat 17 passengers.

These vehicles, built from 1936 through 1939 and painted an alluring shade of red, deliver a stylish ride through the gorgeous terrain. Yet their functionality sets them apart; the canvas roofs roll back, granting tourists unobstructed skyward views of such distinctive features as the Garden Wall and Triple Divide Peak. The drivers of these sleek rigs were once called Jammers, a linguistic nod to the days when they had to manually jam the gears as they negotiated the tricky ascents and descents along the famous Going-to-the-Sun Road. Ford overhauled the fleet of aging vehicles a while ago, and now the automatic red buses run on propane, making them more environmentally friendly than before.

On the Lake McDonald Crown of the Continent Tour, an eight-hour excursion that left Lake McDonald Lodge at 9 a.m., we battled the morning cold as we passed through a forest thick with hemlock and cedars. Soon we left the McDonald Valley behind, ascending Going-to-the-Sun Road, clinging to the edge of a glacier-formed arête, on the flanks of the Continental Divide. The road itself is a National Civil Engineering Landmark. Built between 1921 and 1937, it features a revolutionary design that dramatically lessened the environmental impact the original 15 planned switchbacks would have caused. Going-to-the-Sun Road has only one major change of direction, called the Loop, a design feature that maximizes views.

The scenery was spectacular that morning, since the smoke from the wildfires that choked the valleys much of the summer had dissipated a few days before. After exploring the panoramic vistas of Logan Pass, where I spied grazing Rocky Mountain goats before seeing bighorn sheep scurry across a ridge near Many Glacier Hotel, I considered my Red Bus Tour a total success. Throughout the day we had also seen six bears, four grizzlies and two black bears, so the trip rated somewhere above a total success.

Visitors to Glacier and Waterton Lakes National Park, a contiguous Canadian park to the north, who have more time to explore may want to set out on a hike. The Trail of the Cedars and the Swiftcurrent Nature Trail represent the easy end of the spectrum. The Carthew-Alderson Trail, with its 12-mile one-way route to Waterton Park, holds down the strenuous end. The Highline Trail is generally regarded as a must-do for travelers who are relatively fit. Beginning at Logan Pass, this 7.6-mile scenic bonanza parallels the Garden Wall and delivers hikers to the Granite Chalet Park.

So many more outdoor options exist in Glacier: boat tours on Lake McDonald, horseback riding, golfing, bicycling and fishing for five kinds of trout, Kokanee salmon, Arctic grayling and whitefish. RVers may want to stay in various campgrounds to experience the park’s attractions. Apgar, on Lake McDonald’s south shore, is open early May through mid-October and features 192 sites; St. Mary, located one mile from the St. Mary entrance, is open late May through late September and has 148 campsites, with rigs limited to 35 feet. A handful of other campgrounds accommodate RVs, and for travelers to appreciate the magnitude of Glacier National Park, to experience even a small fraction of its wonders, RVers may have to settle into a different campground on each return visit.

As for me, I can’t return to Glacier Country soon enough.