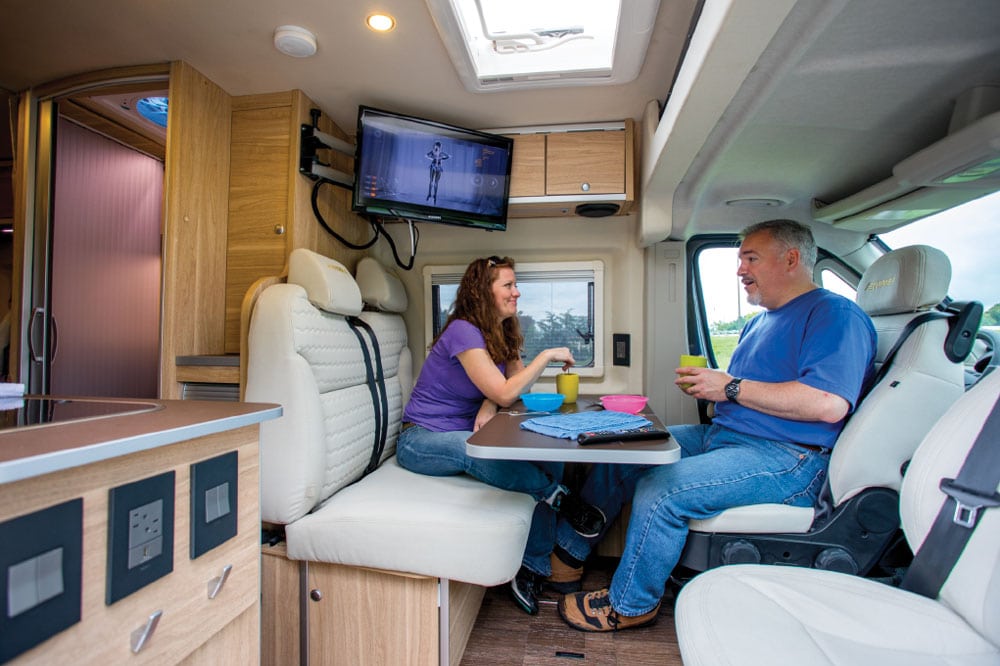 The RV industry has seen a lot of shifts in the manufacturer scene over the last few years. Mostly, companies have either been swallowed up by a larger entity, have gone out of business or have been started up from scratch. But there is one that’s a little different, having entered the North American market as a newcomer, but that’s already established and successful halfway across the globe. Germany-based Erwin Hymer Group (EHG) has a significant, long-standing presence in the European caravan market and made itself known stateside when it inked a collaboration deal with Class B Canadian manufacturer Roadtrek in the fall of 2015, before buying Roadtrek outright in February 2016. Company officials say Hymer-brand RVs will be marketed alongside existing Roadtrek models, complementing one another rather than competing, with Hymer lines bringing European styling with lightweight, high-quality concepts.

After a guided tour of the brand-new Hymer Aktiv at its display during the 2016 Elkhart Open House and a necessary predelivery inspection and service by American RV Sales & Service in Grand Rapids, Michigan – nearly two hours from Elkhart, Indiana – the Hymer was ready for our test trek.

The dinette can seat three, but a fourth diner would have to sit in the copilot’s seat across the aisle.

The trip to the dealership was long, but the time behind the wheel allowed for quick acclimation. The Aktiv is built on a RAM ProMaster 2500 chassis, which makes for a pretty smooth and stable ride; it handled the bumps and bruises of oft-patched country roads with grace, and easily held the 70-mph-limit Michigan highways on a rainy, blustery day. Its 3.6-liter V-6 engine accelerated and decelerated smoothly, and was able to keep up with high-speed traffic. Visibility was good; the Aktiv sits up high, and we appreciated the independent power positioning on all four side mirrors (two on each side). Backing in anywhere was made easy, as the lower mirrors can be pointed toward the ground for a clear view to the sides of the motorhome.

Inside, it’s obvious that Hymer intended for the driver and passenger to be as comfortable as possible in the buttery-soft leather captain’s chairs; I’ve never seen vehicle seats more customizable. In addition to the standard seat-angle lever, there are two tilt dials and an adjustable lumbar support, and there’s even a dial in the armrests that lets you set individual base height and angle. There is no doorside armrest on either seat, which was uncomfortable during driving, as was the lack of steering-wheel tilt. At 5 feet 2 inches I’m at the low end of driver height and reach range, but the wheel’s sunny-side-up angle made it difficult to place my hands at the 10-and-2 position without scooting the seat up so far that my legs were uncomfortably bent, and I really wanted my hands there for added leverage on that windy day. The taller co-driver didn’t have a problem with that, nor with the seat belts cutting into his neck a bit as I did.

The center console and cockpit area are well-appointed; elements include two USB charging ports and auxiliary cord jack, a detachable clipboard, assorted shelves and compartments, and deep pockets on the doors. There’s also a screen for the backup camera and navigation system, as well as a host of other functions such as the U-Connect system, which ostensibly allows for device sync and voice commands.

Our first stop was a tailgating event, where many curious visitors stopped to ask about the motorhome and take a peek inside. The main attraction was the side screen door, which remains one of my favorites, too, in spite of its reluctance to slide easily. Right inside the door is the dinette with a wall-mounted HDTV. From outside, we could keep an eye on the game; while inside, we could enjoy the air without the bugs. Lounging inside, the skylight above the cockpit was one of our favorite features. Its nice, wide dimensions allow in plenty of light and its adjustability allows users to control how much air it to let in. The day/night shades give even more control over both.

On tailgating day, we discovered an unexpected use for the rear sleeping area. The Aktiv has a center-aisle floorplan, with storage cabinets against the walls in the back of the unit and mattresses on top, but not in the form of twin beds; there’s a hinged frame that drops down, forming a bridge across the aisle to support the unfolded mattress pieces to make a single bed. Three pieces ride on the streetside ledge and one on the curbside, but the use of that fourth piece with the others makes into a long stretch of open “tabletop” space upon which to lay out snacks, binoculars, books, etc. One of the under-storage cabinets was big enough for larger items. A thoughtful extra door provided access to that cabinet from the rear of the vehicle as well as the aisle, which was the perfect spot for our canopy to ride during transit.

The power steps outside the side patio door (standard) and the ones at the driver and passenger doors (optional) are unique and interesting (especially the latter), but after a short while, they just got in the way. If you’re ducking into the cockpit for something, it’s possible to get jabbed with the step if you’re not mindful to jump aside, and it’s too slow most of the time to be an entry/exit assist. We learned to just jump over it while exiting the cab, and stepped on it halfway deployed coming in. Unfortunately, there is no way to turn off the steps; the one switch holds the porch step in place whether the side door is open or closed, but there is no switch to prevent them from extending in the first place. 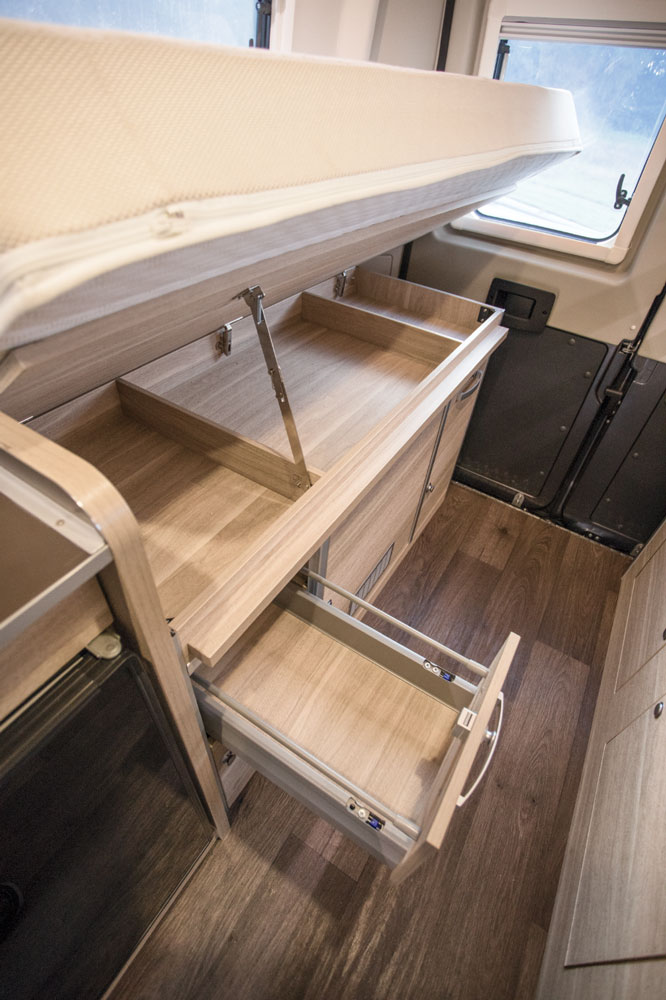 The Aktiv offers a decent amount of storage for a Class B, with cabinets below the sleeping area and underbed storage. Due to the location of the refrigerator, we found it best to sleep with our heads on the opposite side.

The Aktiv’s quick setup also made it relatively easy to break camp to tour the surrounding area. The Aktiv utilizes a cartridge toilet, which is very popular in Europe. Rather than using a holding tank, the toilet has a cartridge that’s easy to pull out from a compartment door on the exterior side of the motorhome. We found the cartridge simple to pull out of the unit, roll to the dump site and empty.

With the nuts and bolts handled, we could really dig in and poke around inside the Aktiv, which was home to three of us. We pushed every button and pulled open every cabinet. We watched TV, played cards, cooked and ate, cleaned and relaxed. I sent the boys off while I sat at the dinette and got some work done. The dinette was spacious enough for me to spread out with my notes and plug a laptop into the nearby outlet (all outlets include a USB port).

There was also enough room at the table for game play and dinner dishes, though longer pull-out supports under the extension would keep it from sagging slightly at the end. And though the dinette can seat two on the adjacent cushion and one more with the driver’s captain chair swiveled around, a fourth person would have to sit on the passenger cockpit seat, making it a little far from the table. We did find that the cab area needs lighting, as there currently is none and the boys couldn’t see their cards very well during our nighttime games.

The northern-Indiana weather led us to need the air conditioner and the furnace, and both worked like a charm, although the somewhat noisy rear-area roof air conditioner didn’t quite pump cold air all the way to the front. The Truma system, which provides hot water and comfort heating using LP-gas, electric or both, did a fantastic job. While boondocking, the solar panels contributed to longer battery life, but on occasion we still had to run the engine to recharge the batteries.

The kitchen is equipped with a small turntable microwave and 3.1-cubic-foot refrigerator, which made ice and kept popsicles frozen at the highest setting, but also froze the eggs stored on the top shelf. There also wasn’t room for a half-gallon jug of milk, even in the door. But we all enjoyed using the flush-top sink and two-burner LP-gas cooktop.

Remember that tabletop space created by moving the mattress pieces all to one side? It was especially helpful at dinnertime, as the space could be used as a countertop for food prep and staging. There’s no place for a trash bin, but owners could put one in the bathroom right behind the galley during dinner prep, and behind the passenger seat the rest of the time.

The Aktiv’s bed is a neat trick of engineering. When a floorplan footprint is so confined, designers must think vertically, so putting storage cabinets below and the sleeping area above them – with more overhead cabinets above that – is a good way to make the most of the available space. Still, there’s a give-and-take; here, the “take” is that the top of the mattress, with no bedding on top of it, is nearly 3 feet off the ground, so some folks may need a stepstool to climb up.

While the bed area is well engineered, the mattress is excessively firm, and a good night’s sleep was dependent on the addition of two comforters to soften the surface. The dimensions make it necessary to sleep side-to-side rather than parallel with the motorhome; it worked best with our heads streetside. Proud of our creative space-finding prowess, a clever “nightstand” area was discovered on the kitchen counter just on the other side of the bedroom wall, but that’s also where the compressor-type refrigerator is located. With one sleeper’s head next to it, both the sound and vibrations coming through the wall and mattress woke that person continually through the night, even with foam earplugs. Once we switched our heads to the other side, and had those extra comforters between us and the mattress, we did much better.

Another aspect of the interior we appreciated about the bed space is its independence of the dinette, so that those who like to get up early to make coffee and read the newspaper can do so without unfairly rousting those who like to snooze a bit longer.

The bathroom is small, but with a compact unit like this, users are conditioned to dance around the toilet while taking a Navy shower. The door, like the porch screen, didn’t slide easily, but it’s solid for privacy; and the fold-down tray sink is brilliant. Moving the bathroom light switch to a more convenient spot other than around the kitchen-counter corner would be a good improvement.

For those who are new to RVing, the Aktiv is a good way to get acclimated to the lifestyle without going full bore and perhaps getting overwhelmed. For experienced and bigger-scale RVers who want to downsize without losing too many of the comforts they’re used to, it could make an ideal transition unit. The livability was better than expected for such a compact motorhome.

The stylish Aktiv is light and modern, and more mobile and less clunky than larger motorhomes. While there are still some kinks to work out, and some European design elements to translate better for North American culture and tastes, Hymer is on the right track to capture the attention of the burgeoning Class B demographic.

Welcome to the Americas, Hymer.

For more information on the Hymer lineup, visit www.gohymer.com