Getaway: Lost Wilderness of the Seminoles 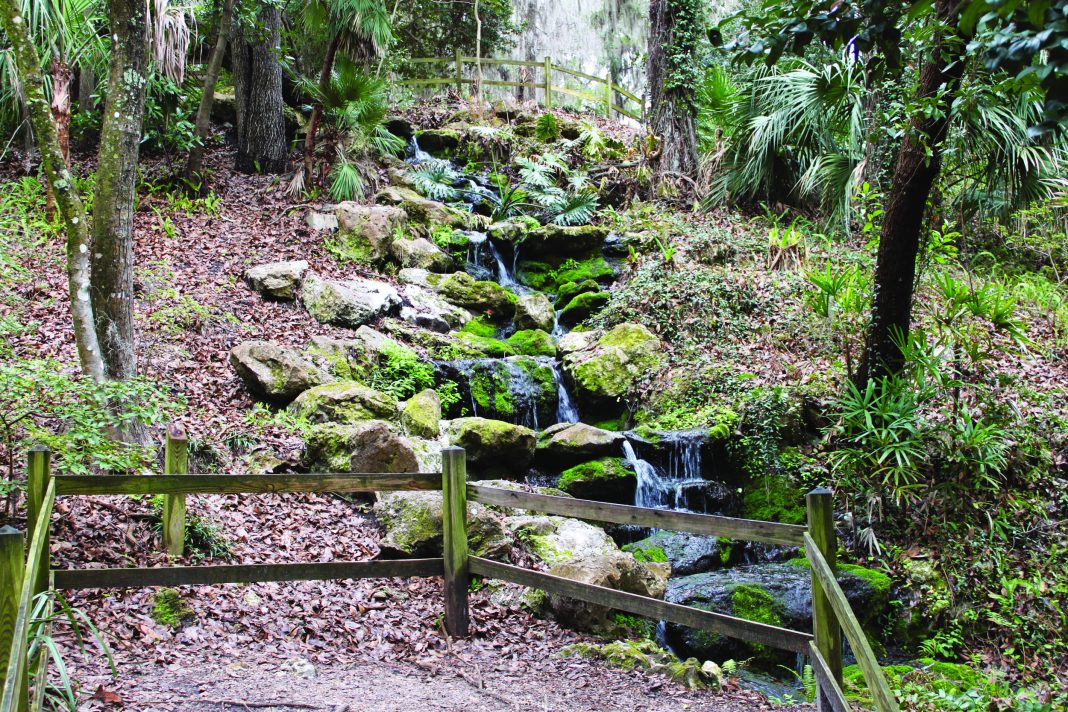 Travelers hunting for the true character of Florida need to look away from the touristy epicenters of Orlando or the jam-packed Gold Coast. Exit off the freeway toward the 110,000-acre Green Swamp near Dade City, northeast of Tampa, and discover the 86-mile-long Withlacoochee River – a native Muskhogean name that means “little big water.”

While four rivers originate in the massive, stewing Green Swamp, the Withlacoochee begins in northern Polk County and snakes northwest and then west, before emptying into the Gulf of Mexico near Yankeetown. It is a wonderland of forests, swamps, marshes, springs and lakes that provide refuge for large alligators, the elusive Florida panther and a variety of other wildlife.

The beautiful waterfalls in Rainbow Springs State Park are man-made and remain from the days when the spring was a private attraction.

Out here, the tropical environment is saturated with moisture and teeming with plant and animal life. Human residents are friendly, but everything and everyone moves slower here – a time-honored, nature-backed coping mechanism for surviving with the sultry conditions. Away from the condo towers and sprawling resorts found elsewhere in the Sunshine State, these swampy grounds and swaying grasses are the heart of Florida.

A Painful History On Display

In this scenic wilderness, the Seminoles were supposed to live under the protection of the federal government. But the treaty did not last. The result was the 1834 Treaty of Payne’s Landing and the forced relocation of the Seminoles to reservations in the Oklahoma Territories. Legendary Seminole chiefs and leaders including Micanopy, Alligator, Jumper and Osceola refused to sign the treaty or be relocated. The Cove of the Withlacoochee became the battleground of the Second Seminole War, the longest and costliest Native American war in U.S. history. It remains one of the ugliest wounds on our national history.

We began our trip 20 miles southeast of the Cove in Bushnell at the site of the event that ignited the war, the Dade Massacre. We checked in at the ultra-modern NASCAR RV Resort at Blueberry Hill. This resort is one of several quality RV parks in the immediate area, including the Red Oaks RV Resort and Paradise Oaks RV and Golf Resort. The Dade Battlefield Historic State Park is located just south of Bushnell.

Here, in December 1835, a large force of Seminoles led by their chief, Micanopy, attacked a column of 108 U.S. troops under the command of Maj. Francis Dade. After several hours of desperate fighting, the Seminoles finally overwhelmed the soldiers. Only three men survived in what was the second-worst massacre of U.S. soldiers by Native Americans.

Costumed Seminole warriors provided plenty of opportunities for photos after the battle re-enactment.

The 80-acre park features a nature trail through 40 acres of pine flatwoods along with an abundance of native coontie and stunning live oaks, including one that’s more than 400 years old. The visitor center is small but has an excellent exhibit with battlefield artifacts and a video about the battle. Just outside the center is the short battlefield trail that follows the historic Fort King Military Road. A replica of the log barricade, hastily thrown together by the soldiers, marks the spot on the road where most of the command met its fate.

An annual re-enactment of the battle is held in late December or early January. The park has six nice picnic pavilions and there is daytime parking for RVs.

We packed up and headed for Inverness and our site on the Withlacoochee River, at the Riverside Lodge & RV Resort. The park is located five miles east of Inverness on state Road 44. On the way, we decided to go to Sumterville for lunch at Catfish Johnny’s Restaurant. The fresh catfish are a real treat and a variety of other fresh seafood, including gator, is served up every day but Sunday.

This route also took us by Lake Panasoffkee, part of the Withlacoochee watershed. The lake is a popular spot for sportsmen looking for trophy largemouth bass and good catches of crappie. After arriving at Riverside Lodge we spent the rest of the day enjoying the scenery from our campsite overlooking the river.

The next day we traveled to the Old Citrus County Courthouse Heritage Museum in downtown Inverness. On the way we passed over a portion of Lake Tsala Apopka, the sprawling 19,000-acre chain of lakes that is part of the Cove of the Withlacoochee. Here, the elusive Seminoles sought to escape from the government that wanted them forcibly moved west.

Before entering the courthouse, we couldn’t resist an enjoyable stroll on the nearby boardwalk overlooking scenic Cooter Pond Park. A variety of birds including storks, egrets and herons inhabit the pond along with several good-size alligators and many Cooter turtles that are abundant in the lakes and rivers in the area.

The Old Citrus County Courthouse sits on the north end of Main Street in Inverness. It has been restored and is today the site of the Heritage Museum.

Museum volunteer Joan Knapp greeted us in the first-floor museum of the old courthouse and provided an excellent overview of the exhibits. Constructed in 1912, it was the center of Citrus County government for more that 80 years. It has been beautifully restored and opened as a museum in 2000. There are a number of exhibits that explain the history of the area.

From Inverness, Citrus County stretches west 20 miles to the Gulf of Mexico and includes scenic Crystal River and Homosassa Springs.

The courthouse overlooks the small but interesting downtown, with many buildings as old as the courthouse. We strolled Main Street before driving south two miles on U.S. Highway 41 for a visit to Fort Cooper State Park. On the way, we passed over the 46-mile-long Withlacoochee State Trail, the longest paved rail trail in Florida. The trail begins in Citrus Springs and runs south through small towns, ranches and natural areas to Trilby. The Inverness trailhead is just north of the city on Highway 41.

Located on crystal-clear Lake Holathlikaha, on the western fringe of the Cove of the Withlacoochee, Fort Cooper State Park is named for Maj. Mark Anthony Cooper. It was here in April 1836 that he built a field fortification on the western bluff of the lake to protect sick and wounded soldiers. The men had to be left behind by Gen. Winfield Scott as Scott and his command continued their march south to Fort Brooke in Tampa. Cooper was ordered to hold this position and wait for relief troops that would come in nine days.

Seminoles, led by Osceola, discovered the fort and attacked it almost daily. At one point, they attempted to storm it with a force of 500 warriors. It was 16 days before Gen. Scott returned with badly needed supplies and troops. Cooper’s command was saved with only one man lost.

The park offers more than five miles of self-guided trails with an abundance of birds and other wildlife. A trail extension connects the park with Withlacoochee State Trail. When the water level permits, the 160-acre lake is popular for fishing and swimming. One of the trails led us to the site of Fort Cooper. Signs describe the action at the fort and a reconstruction of a small portion of the rough log stockade marks the spot where it stood. The annual Fort Cooper Days events are held every year in March (March 17-18, 2012), featuring re-enactments of the skirmishes fought here during the Second Seminole War.

Our final must-see destination on this trip was Rainbow Springs State Park. We traveled north of Inverness on Highway 41 for 21 miles through the pristine low country west of Lake Tsala Apopka along the Cove of the Withlacoochee to Dunnellon. Here the Withlacoochee River bends and makes a final run to the Gulf of Mexico.

The fourth largest spring in Florida, Rainbow Springs forms the headwaters of the stunningly beautiful Rainbow River that flows south and merges with the Withlacoochee River. It is believed that humans began using the spring at least 10,000 years ago. During the Second Seminole War, Seminole war parties and U.S. troops moved through the area. In March 1836 the Battle of Camp Izard was fought at a crossing on the Withlacoochee only a few miles away.

Today, the 1,472-acre park is a wonder of natural beauty. Magnificent azaleas bloom in early spring in numerous gardens, some with waterfalls that remain from the days when the spring was a private attraction. The river is teeming with wildlife, including otters, alligators, turtles, many species of fish and a variety of water birds.

Osprey, hawks and swallowtail kites soar over the river and the uplands surrounding the springs provide cover for the endangered gopher tortoise, deer and beautiful indigo snakes. Three trails begin outside the visitor center and lead through the gardens along the river corridor. The park has a swimming area and the river offers canoeing, snorkeling and tubing.

Rainbow Springs Campground is an eight-mile drive from the headsprings and about a mile and a half downstream, on the east side of the river. There is river access  and the sites have full hookups.

Legend of the Seminoles

By the middle of 1842, the Second Seminole War was over. After being chased by the U.S. Army and state militia throughout the cove for seven years, many of the proud Seminoles finally agreed to move to the western reservations. The fierce warrior Osceola had been captured through deceit and died in captivity. Chief Micanopy had been taken prisoner, while under a flag of truce, and sent to an Oklahoma reservation. Alligator and Chief Jumper had reluctantly surrendered and were also sent west. The remaining Seminoles sought refuge in the vast Everglades and on an informal reservation in southwest Florida. But there would be no peace, and a third Seminole War was fought from 1855 to 1858. When it ended, it is estimated that fewer than 100 Seminoles remained in Florida.

Today, archaeologists continue to excavate sites in the cove where the Native Americans built their villages. The Seminoles had proudly and fiercely resisted giving up their lands until there was no longer any hope. The wilderness of the Cove of the Withlacoochee was lost to them forever.