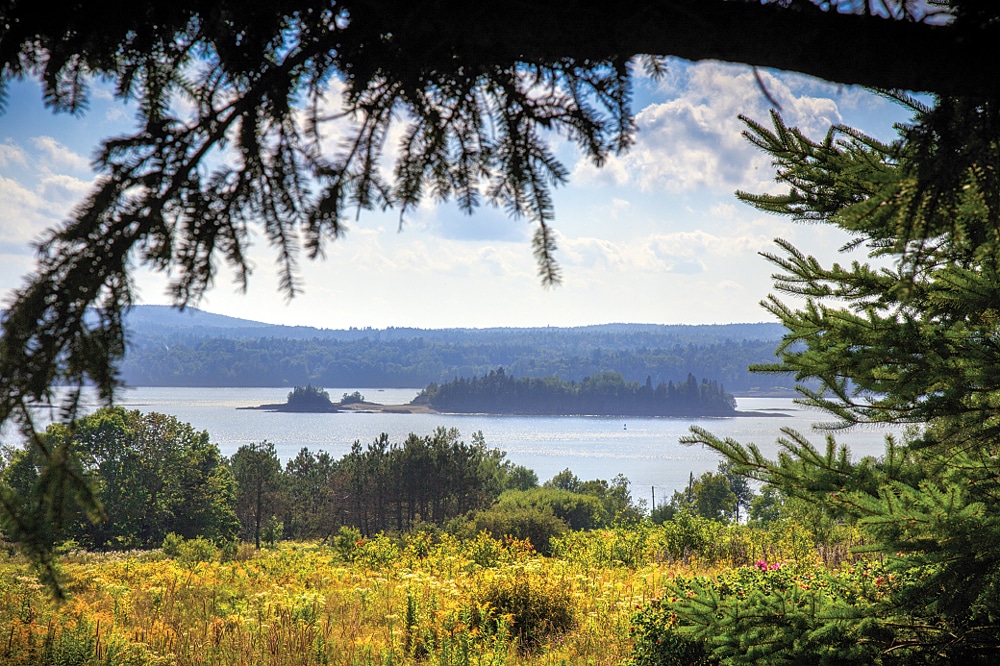 For an exciting once-in-a-lifetime opportunity, pack the motorhome and join the 2017 yearlong celebration of Canada’s 150th Anniversary of Confederation. This nationwide grand occasion will feature free admission to all of Canada’s national parks, historic sites and marine conservation areas operated by Parks Canada. That’s more than 200 exceptional places for you to explore!

Canada, whose name evolved from the St. Lawrence Iroquoian word for village, “kanata,” is the second largest country in the world. Comprised of 10 provinces and three territories, it shares the world’s longest international border with the United States. Even though these two countries are longtime allies, there was a time when the northern neighbors feared annexation by the United States.

In the 1860s, the land we now call Canada consisted of several British North American provinces and colonies. While concerns about potential United States aggression increased, Great Britain became increasingly reluctant to defend the North American colonies. The prospect of strength through unity helped encourage the colonies to consider an alliance, a confederation that benefited the new country and the “mother country.” Through peaceful negotiations, Great Britain passed a law finalizing the union of three colonies – New Brunswick, Nova Scotia and the Province of Canada (today’s Ontario and Quebec) – creating the Dominion of Canada at Confederation on July 1, 1867. The remaining provinces and territories joined between 1870 and 1999 to create the Canada we know today that stretches from ocean to ocean to ocean, the Atlantic to the Pacific to the Arctic.

So, considering the 9,984,670-square-kilometer size of Canada (more than 3.8 million square miles), where do you begin exploring this great country? Here’s one awesome suggestion: Fundy Coastal Drive. Located along the Bay of Fundy in eastern Canada’s province of New Brunswick, the 286-mile Fundy Coastal Drive travels along lush Acadian forests, past farmland and rural villages with their quintessential small white churches, through larger towns and to iconic coastal vistas. Enjoy a leisurely Canadian journey as you discover four fascinating historic sites and one unique national park along the drive. All five sites will offer free admission in 2017 in honor of Canada’s 150th Anniversary of Confederation.

What is so noteworthy about a 6.5-acre island in the Saint Croix River that makes it an international historic site? Discover the answer when you visit this Parks Canada site and see the famous island. There’s no access to it, so park the motorhome and take a stroll along a gently sloping path where you’ll learn about the island’s exceptional history. Like a good novel, the tale includes a dramatic adventure into the unknown.

It begins in France on November 8, 1603, when King Henry IV rewarded Pierre Dugua, Sieur de Mons, with the title Lieutenant General of Acadie, a North American territory between the 40th and 46th parallels. The French had been fishing and trading for valuable furs seasonally in this region for more than a century, but in April 1604, Dugua sailed from France along with mapmaker Samuel Champlain, artisans, priests, soldiers and noblemen intending to establish a colony. 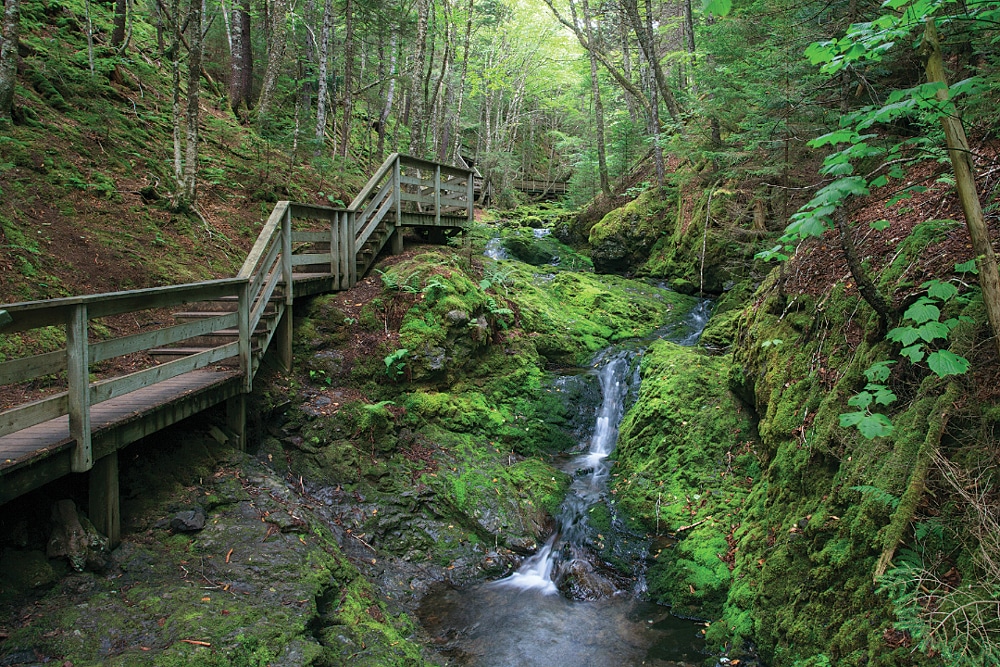 A trail leading to Dickson Falls on Saint Croix Island is filled with lush, green ferns and mosses.

Acadie shares the same latitude as temperate France, so the settlers expected a similar climate. They chose the island location and built a colony. The native Passamaquoddy were friendly and all was well when the ships returned to France, leaving 79 men and boys on the island. A harsh winter caught the settlers by surprise. The river froze with upheavals of ice too dangerous to cross. The colonists were cut off from the mainland. There was no fresh water, game or firewood. As the unforgiving winter continued, illness set in, men died and the colony seemed doomed. What happened next? When you visit Saint Croix, you’ll learn how the determination of the survivors led to a French presence in Acadie that endures today.

This thought-provoking site represents a time period more than 200 years later than the Saint Croix colony. The St. Andrews Blockhouse, a common defense structure of the time, was built due to the War of 1812. Today, visitors can walk inside the wooden two-story building where the upper floor overhangs the bottom one. Peer through the gun ports, imagining what life was like for the four men on duty. Three 18-pounder guns plus two 9-pounders were strategically placed in front of the blockhouse waiting for an enemy who never arrived.

One of the oldest surviving blockhouses in Canada, St. Andrews offers a historical perspective that is eye-opening. You’ll quickly notice that cannons are pointing across the water to the U.S. state of Maine. The War of 1812 was between Great Britain and the United States, but it was fought mostly on battlefields in several U.S. states and present-day Ontario and Quebec. Afraid of American attacks during the war, the people of St. Andrews raised the funds and built the blockhouse. Interestingly, they didn’t fear their closest neighbors; indeed, many Canadians were married to people from Maine. Instead, the people from St. Andrews feared raiding privateers sailing from states further south. Both American and British governments licensed private businesses and ships known as privateers who seized vessels and confiscated cargo. During the war, the people in the Atlantic region of Canada actually enjoyed economic prosperity.

Listen to the Canadian perspective about the war from on-site Parks Canada interpreters and you’ll hear some interesting tales. One story says that during the war, people from New Brunswick gave gunpowder to people in Maine for them to celebrate the Fourth of July!

Making the Drive
The 286-mile Fundy Coastal Drive travels between the towns of St. Stephen and Sackville, in New Brunswick, Canada. It is marked by blue signs with a white lighthouse. The signs are generally well-placed on an easy-to-follow path; however, a couple of turns have no signs. Obtain a Fundy Coastal Drive map at major entry points to the province, at visitor information centers or get one before your adventure by ordering a free New Brunswick guide at: http://www.tourism newbrunswick.ca/travelinfo/
orderaguide.aspx.

Take Fundy Coastal Drive to Saint John, the oldest incorporated city in Canada, for your next free distinctive sight to see. Here you’ll find a round defense tower known as a Martello tower, fittingly referred to as the Sentinel of Saint John.

The Carleton Martello Tower was built on a hill overlooking the harbor to protect the city and the overland route to Canada’s interior during the War of 1812. By the time the fieldstone tower was completed in 1815, the war was over. It wasn’t until 1866 that the tower was armed and used as a garrison, this time due to fear of invasion from the Fenians, a radical Irish-American group.

When a devastating fire destroyed an immense area of Saint John in 1877, the tower survived. It became such an emotional link to the city’s past that when militia wanted to tear it down, there was a public uproar.

Over the years, the tower has been used for various purposes including a detention center for deserters during WWI. Named a national historic site in 1924, the tower was again utilized during WWII when the unique two-story concrete superstructure was added as a fire command post. A $13 million restoration to the tower began in 2016, temporarily limiting interior access. The interesting exhibit gallery and the beautiful view of the harbor with the impressive tower standing as a witness to history makes this site a must-see.

Allow plenty of time to explore this exceptional park. The name “Fundy” is derived from the French word “fendu,” meaning split. The Bay of Fundy’s shape is one of the reasons that it has the world’s highest tides. Named one of the Seven Natural Wonders of North America, the Bay of Fundy’s tide can rise up to 17 meters (55 feet), the height of a four-story building. At Fundy National Park, you can walk the beach at low tide and discover the extraordinary sea life that clings to the rocks waiting for the water’s return. When the tide starts coming in, you’ll see dramatic changes. It’s fascinating to watch the rapidly rising tide consume the beach as it once again becomes the ocean’s floor. 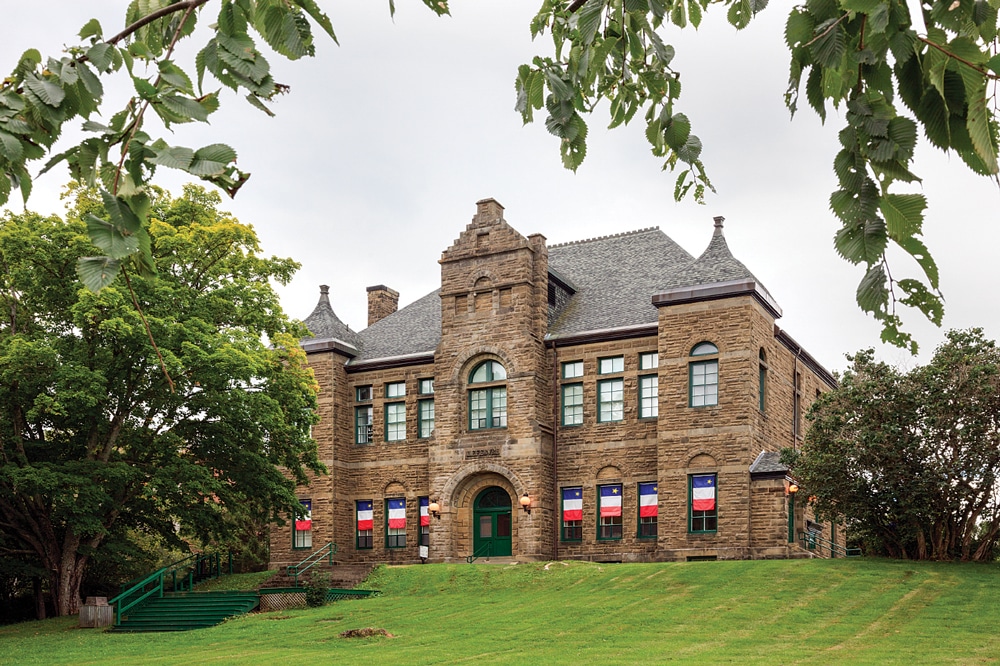 The Monument Lefebvre is named in memory of Father Camille Lefebvre, founder of the College Saint-Joseph in Memramcook.

Fundy National Park protects two diverse environmental systems; from the marine coastal region, the landscape quickly rises 300 meters (984 feet) to the Caledonia Highlands plateau. Here you’ll see the Maritime Acadian Forest, a unique forest found only in the Maritimes, southern Quebec and New England states. Some of the last old-growth Acadian forest in the world is found in the park; it includes more than 30 species of trees, more than 400 species of lichen and is a haven for bird-watchers with more than 260 different types of birds.

The park offers more than 100 kilometers (62 miles) of trails from an easy half-kilometer (0.3-mile) loop to a 50-kilometer (31-mile) challenge. Be sure to see the stunning Dickson Falls by hiking the 1.5-kilometer (0.9-mile) loop trail through the forest to an oasis of waterfalls, ferns and vivid green mosses.

If you’re looking for outdoor activities, this park has them. Check out the saltwater swimming pool, kayak on the bay or serene Bennett Lake, or get in some fishing. Also make time for tennis, lawn bowling, mountain biking or hitting a round on the nine-hole par-70 course designed by world-renowned golf course architect Stanley Thompson.

Since the park is a Dark Sky Preserve, camp at the park, relax alongside the motorhome and watch for a spectacular night sky. 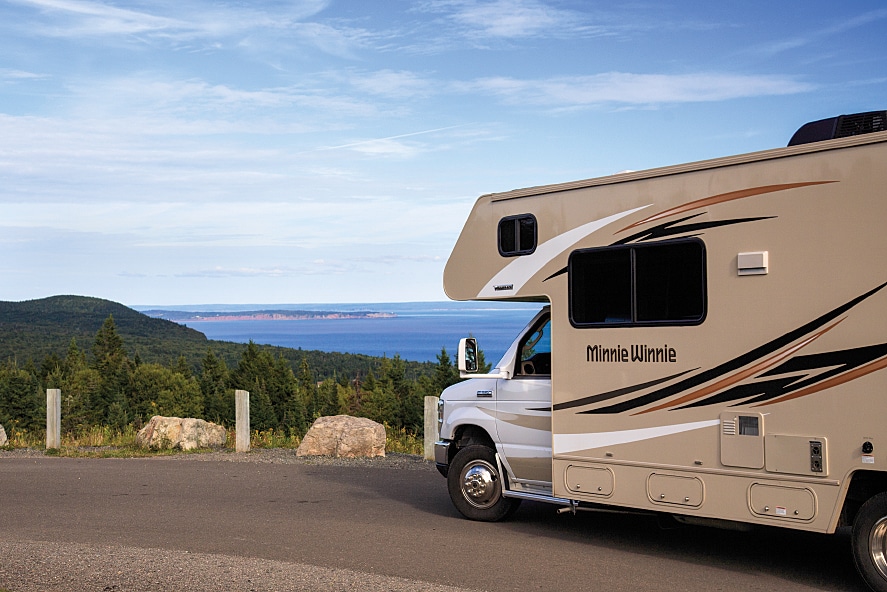 Traveling in Canada
New Brunswick is officially bilingual; both English and French are spoken. Some locations will accept U.S. dollars but consider exchanging U.S. dollars for Canadian currency or use a credit card (international fees may apply).

In a dramatic deportation of the Acadians, British troops set fire to homes, separated families and crowded many people onto ships, forcing them to endure dangerous conditions with foul drinking water, food shortages and deadly disease. Storms sank some of the ships, drowning everyone on board. The Acadians were violently deported from their land and scattered around the world.

This is a portion of the story about the Acadian people shared at this enlightening historic site. Who are these Acadian people? Between 1636 and 1650, about 50 French families settled the region known as Acadie. Within a few years, a small number of people from other nations arrived in Acadie and some French men married local First Nations women. After a few generations, these settlers of Acadie were considered a distinct people.

Acadie has a strategic location to trade routes and was caught in a conflict between France and Great Britain. Beginning in 1755, about 9,500 Acadians were deported. Some were sent to France and England, while others were discharged from Massachusetts to Georgia. They were outcasts in a foreign country, French-speaking Catholics among the English-speaking Protestant majority. Many of the unhappy exiles made their way to the former French colony, Louisiana. Here they found trees, fruits and animals in a land filled with cypress swamps. Their native French had no names for these new discoveries; thus, the Cajun language and culture were born.
Visit Monument Lefebvre to discover how the Acadians resettled their former homeland and how they were impacted by the site’s namesake, Father Camille Lefebvre. At one time, Acadia was the region around eastern Maine and New Brunswick; today, Acadia is considered to be anywhere Acadians live – a nation without a border.

What discoveries will you make as you travel Fundy Coastal Drive? After enjoying this intriguing journey, when you reach the “End” sign, then what? On the same pole is another sign – “Start” Acadian Coastal Drive.