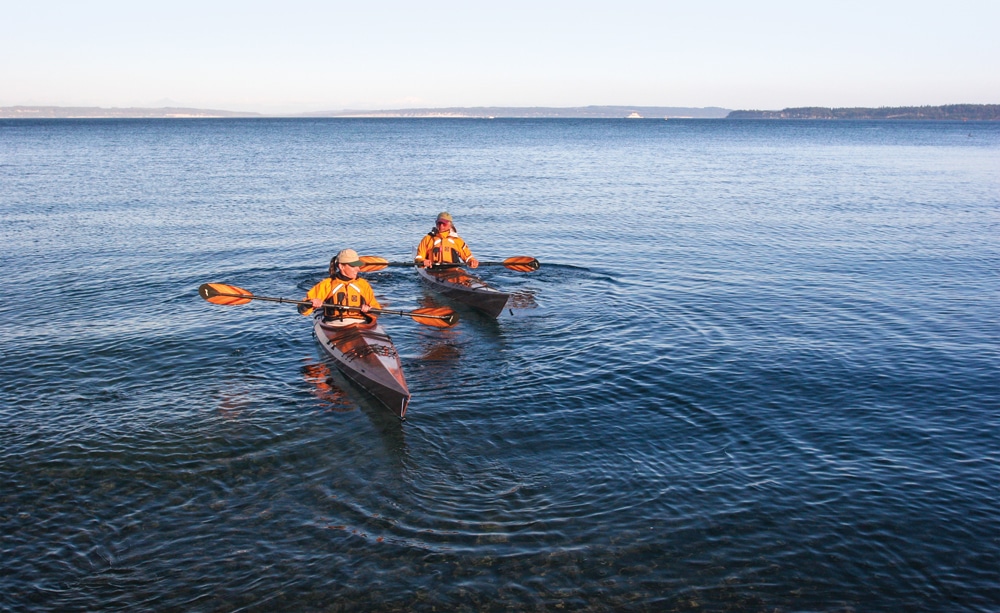 Helen Keller once said, “Life is either a daring adventure or nothing at all.” As my husband, Jim, and I have traveled the United States in our motorhome, we have met RVers who participate in sports and recreation at levels we never imagined possible. All of these people are doing what they love and living life to the fullest.

Roger Mosley loves woodworking projects. He has refurbished five vintage Airstreams and has built four kayaks. Roger constructed three of the boats – two single kayaks and one double – from precision precut stitch-and-glue kits made by Pygmy Boats. The fourth was made at the Skin Boat School in Anacortes, Washington. It’s a skin-on-frame boat similar to boats built by Arctic natives for thousands of years. The frame is made of red and yellow cedar, bound together with ties of artificial sinew (waxed nylon), covered with ballistic nylon and coated with urethane. All of Roger’s kayaks are beautiful, like works of art. My husband, Jim, was so impressed by his friend’s skin-on-frame kayak that we went to the Skin Boat School in August 2013 to build a tandem.

During their RV trips to Lake Powell in Arizona, the San Juan Islands in Washington, and Tomales Bay at Point Reyes National Seashore in California, Roger and his wife, Marty Brodzik, have their choice of kayaks. Roger says the singles are more fun, but the double is better when Marty wants to fish. He paddles the kayak to where she wants to drop her line. Doubles are also better for longer distances in open water.

Mary and Jim Zalmanek
Ever since we bought our first mountain bikes in the mid-1980s, most of our vacations have involved biking. When we bought our first motorhome in 2002, the comfort level of our biking adventures improved significantly. For years I’d been intrigued by the Great Divide Mountain Bike Route. It runs along the Continental Divide from Canada to Mexico for nearly 2,500 miles and 200,000 feet of elevation gain. The majority of Great Divide riders – most of whom are significantly younger than us – pull a bicycle trailer. Since I had neither the strength nor the desire to do that, I dismissed the idea until I saw a documentary about five teenage girls who did the ride with van support. I figured if a van could make the trip, so could our motorhome. We made plans to do it the following summer, starting by asking friends and family to drive the motorhome for us for a week or two at a time.

We started the ride in July 2003. It was unseasonably hot for Montana, over 100 degrees. On the third day of our trip, during a stop at a convenience store, we talked to a customer while we sat in the shade and drank Gatorade. After a while he said, “You two look a little old to be doing this. What’d you do, lose a bet or something?” We were still laughing about his comment when we reached Mexico two months later.

When we first met Judy and Bob Lyle, we’d never heard of pickleball. It’s a game played on a badminton-size court with a slightly modified tennis net, a 3-inch hollow plastic ball and a solid paddle, reminiscent of an oversized pingpong paddle. The Lyles have been avid pickleball players for five years. They play from two to five days a week, and give beginner clinics when they are home in Colorado.

Within 10 minutes of meeting them at Voyager RV Resort in Tucson, Arizona, they offered to give us lessons. Judy told me pickleball is good for people who never thought they could play tennis. The paddles are shorter, making the hand-eye coordination easier. Since the court is smaller, less movement is required. With such enthusiastic and helpful teachers, we found that we really enjoyed the game. Pickleball is quite popular at Voyager. The resort’s 11 courts are usually filled with friendly competitors. Voyager hosts the Tucson Senior Olympics Festival Tournament in January. In 2014, the tournament attracted a record 280 participants.

When Brian Smith, one of the owners of Diamond Lake Resort near Owensboro, Kentucky, has free time in the summer, he takes his radio-controlled (RC) boat to the lake. He’s often joined by other campers in lighthearted competition. Five years ago, Brian created Thunder on the Diamond, an RC boat race that attracts around 100 racers. These boats can travel in excess of 50 mph. The winner gets a trophy, and more importantly, bragging rights.

vent coincides with the ever-popular “Hillbilly Alympics” in July. That’s when Mr. and Mrs. Hillbilly are crowned and the Hillbilly torch is lit. Games include toilet-seat horseshoes, a truck drag and hay-bale rolling. Winners sit for photos on the Alympic podium, which consists of three toilet seats at different heights for gold, silver and bronze.

While climbing initially drew Dottie to El Potrero Chico, the memory of a starving dog chained to a tree keeps her coming back. In 2011, Dottie and two friends rescued the dog and named it Fiona. These three women founded Fiona Animal Refuge of Hidalgo to care for abandoned and abused dogs. The refuge provides free spay and neuter services, flea and tick medication, and when necessary, food and shelter. In her free time in Wyoming, she writes grants to solicit donations for this 501(c)(3) organization. In Mexico, she gives tender loving care to the forgotten dogs. To find out more, “Like” Fiona Animal Refuge on Facebook.When Dottie Cross was 57, she left behind her 30-year career in Las Vegas, Nevada, as one of the first women blackjack dealers and pit bosses on the Strip. Ten years later, she still considers her decision to swap the Vegas lifestyle for a healthier one to have been a lifesaver. Even though the stereotypical rock climber may be a 30-something male, Dottie fits right in. For most of the spring and fall, she serves as campground host at the Smoky Mountain Campground, part of Castle Rocks State Park in southern Idaho. It’s located near City of Rocks National Reserve, which attracts technical climbers from all over the world. Several days each week, she and her friends climb some of the area’s 700 routes. She spends her summers in Wyoming and winters in Hidalgo, Mexico, near El Potrero Chico, a world-famous big-wall sport-climbing paradise.

Every weekend in the summer, Chris and Becky Pearson and their daughters, Emma, age 9, and Gracie, 6, hit the road in their 41-foot living quarters horse trailer with up to four of their horses loaded in the back. They travel to regional rodeos near their home in Nebraska and national ones like the Pendleton Round-Up in Pendleton, Oregon. Their RV allows the Pearsons to stay with their horses and give them the care they need to compete at a high level. Chris has roped since he was in grade school and started steer roping in 1998. Becky has been a barrel racer for 17 years, competing in more than 90 races. For the Pearsons it’s a family affair with Emma and Gracie competing in junior rodeos and local barrel-racing events. According to Becky, “If you are afraid of being embarrassed, you had better not rodeo!” Both Chris and Becky have had enough things go right to have had much success at the amateur and professional levels.

Shirley List is another woman who participates in a male-dominated sport. She is one of three or four women in the world who compete in shooting .50-caliber rifles at a distance of 1,000 yards. Her Armalite AR-50 is a 50-pound gun she shoots from a seated position. She’s really good at this, as the badges on her coat attest. Her best is a 4-1/8-inch group, which translates into firing five bullets across the length of 10 football fields and hitting the bull’s-eye with each shot.

Shirley started shooting four years ago when she was 62. Now she and her husband, Martin, travel to competitions about 10 times a year. Shooting a rifle of this size isn’t something they can practice, since there are only a handful of 1,000-yard ranges in the U.S. that allows a .50 BMG to be fired on their ranges, and not one of them is in their home state of Oklahoma. Nevertheless, she won two third-place plaques at a regional match at the NRA Whittington Center in Raton, New Mexico, in September 2012. Even more than winning, she enjoys the “1,000-yard grin” she gets after shooting her gun. The Whittington Center’s RV campground with full hookups is open to the general public.