From St. Mark’s to Sanibel Island, Lighthouses are Just the Beginning

A bit out of the way but worth the journey, hiking, birding and manatees fill in between lighthouses on Florida’s Gulf Coast

We wanted to see both famed lighthouses, but we knew there was plenty more to see along the Gulf Coast. Our planned stops were Ellie Schiller Homosassa Springs Wildlife State Park (where we hoped to see manatees), Fort DeSoto Park, Myakka River State Park and finally Sanibel Island off the coast from Fort Myers.

St. Marks Lighthouse is located in the Florida Panhandle, south of Tallahassee. It’s not necessarily easy to arrive at, but it’s well worth the drive. The lighthouse is within the St. Marks National Wildlife Refuge and is the second-oldest lighthouse in Florida (Amelia Island Light is the oldest). The first lighthouse at St. Marks was finished in 1831, but it had to be rebuilt because of erosion. The present tower was built on the current location in 1842. On the grounds is the lightkeeper’s house, which is attached to the 88-foot tower. According to local legend, the limestone blocks are from the ruins of the old Fort San Marcos de Apalache (now a historic state park), which is located north of the lighthouse at the fork of the Wakulla River.

From St. Marks, we picked up U.S. Highway 98 and followed it southward into the Florida peninsula toward Homosassa Springs, where the Ellie Schiller Homosassa Springs Wildlife State Park is located. This park is one of the best places in the state to view manatees, sometimes called sea cows. Manatees are large, slow-moving herbivore mammals that live mainly in warm coastal waters. At the park, visitors can watch the manatees in the Fish Bowl underwater observatory, or take a manatee program tour. A tram or a boat can take visitors from the visitor center to the interior of the park, where the lake and observatory are located. Near the wildlife park, the Covered Wagon Campground makes an easy stopover while visiting the area.

After our visit with the manatees, we continued south toward Tampa. We opted to take U.S. 98 to Interstate 75 and go through Tampa. An alternate route would have been to continue southward on U.S. Highway 19 (which shares the route with U.S. 98 until the split just south of Homosassa). U.S. 19 follows the coastline through many small towns and communities and eventually provides access to Interstate 275 in St. Petersburg. At the point where I-75 intersects with I-275 in Tampa, we took I-275 into St. Petersburg traveling through Tampa.

Before crossing the Sunshine Skyway Bridge over Tampa Bay, we took the exit for State Highway 682 to Fort DeSoto Park.

Fort DeSoto Park consists of 1,136 acres made up of five interconnected islands, which are home to mangroves, wetlands, palm hammocks, hardwoods, and many other native plants. There are more than 6 miles of beach frontage, campgrounds, fishing piers, and the remains of the namesake historic fort, which was built in anticipation of the Spanish-American War around the turn of the 20th century. A ferry operates from one of the beaches to the Egmont Key, where the Egmont Lighthouse is located. The fare is $25 per adult.

After spending time at Fort DeSoto Park, we continued our journey southward. Returning to I-275, we crossed the impressive Sunshine Skyway Bridge to rejoin I-75. We wanted to make a stop at another park, Little Manatee River State Park, which is about 10 miles off I-75 and involved backtracking a short distance northward from the junction of I-75 and I-275 to get to the exit for the park.

Little Manatee River State Park is less traveled than the other parks we visited, but it certainly gave us a sense of the “natural” Florida. Major activities at the park include hiking, canoeing, horseback riding, and camping. The easy Oxbow Nature Trail is accessible from the main picnic area and makes a 1-mile loop along scrub ridges skirting the river and an oxbow wetland. One of the most popular activities at the park is taking a canoe or kayak cruise down the Little Manatee River, which flows for 4½ miles through 11 unique natural communities within the park.

Following the Little Manatee River, we again traveled south toward Myakka River State Park, which is one of Florida’s largest state parks with 37,000 acres and diverse natural areas. The Myakka River is the state’s first designated Wild and Scenic River. This is one park where visitors can spend a lot of time, and we did.

A good portion of the park is accessible by dinghy vehicles since the park’s main road is 6½ miles from one end to the other. It has an excellent system of hiking trails, one of which leads visitors to the Birdwalk, a boardwalk into the wetlands and marsh, offering an excellent opportunity to see birds and other critters. 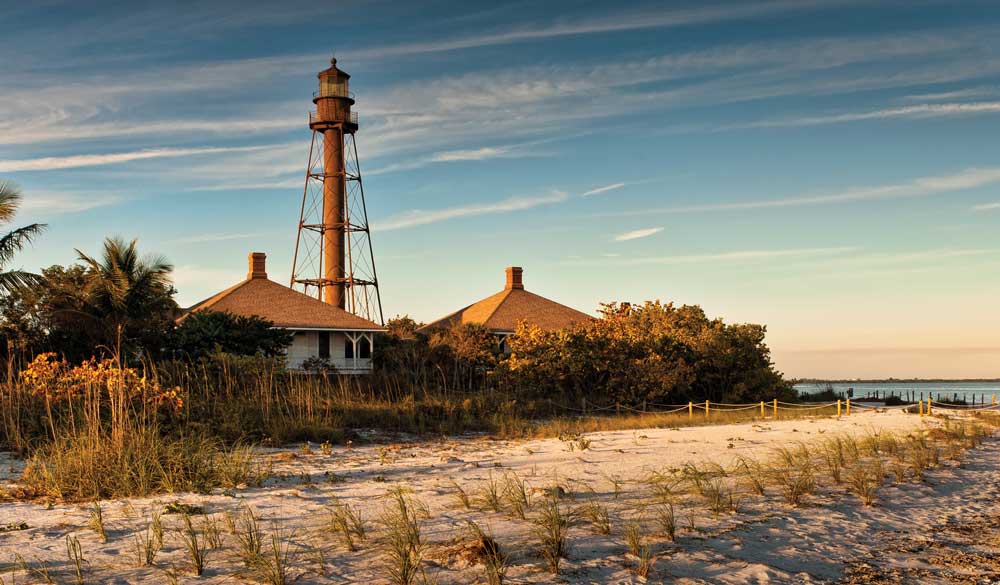 The Sanibel Island Lighthouse is located on the eastern tip of the island.

A short walk from the main road leads to William Boylston Nature Trail and the Canopy Walkway, which is a unique suspension bridge with a tower that provides visitors views of the forest canopy and an above-the-treetops panorama of the park. The walkway is suspended 25 feet and extends 100 feet to the 74-foot tower. It was completed in the year 2000 and is North America’s first public treetop “trail.” Besides hiking, bird watching, and camping (the park has three campgrounds with partial hookups), other popular activities are boating, fishing, canoeing and kayaking. There is also an optional scenic boat tour into Upper Myakka Lake.

From Top: Homosassa Springs Wildlife State Park is home to the Fish Bowl underwater observatory, a prime spot to view manatees. The namesake fort at Fort DeSoto State Park was built in anticipation of the Spanish-American war around the turn of the 20th century.

We arrived at our final destination, Sanibel Island, by way of I-75 and through Fort Myers. There are a number of RV parks before crossing the 3-mile Sanibel Causeway ($6 toll), but our choice to spend our time on Sanibel was Periwinkle Trailer Park, the only RV park on the island. It is located on Periwinkle Way, the main road with the majority of amenities on Sanibel. It is also very near the junction of the Causeway and Periwinkle Way.

Sanibel is an island with two faces: beaches on the Gulf side and the J.N. “Ding” Darling National Wildlife Refuge on the other. The beaches are famous for shelling (low tide is the best time), while the wildlife refuge is excellent for birding. There are a few things to know before exploring Sanibel. There are no traffic lights on the entire island, so there may be considerable traffic during peak season — which is winter — and parking is at a premium. There are parking areas at the beaches and the lighthouse. The cost is $5 per hour (strictly enforced.) Oversized parking is available at Bowman’s Beach Parking Lot, the Gulfside City Park, the Lighthouse Beach Parking Area, and the Trost Parking Area on the east side of Tarpon Bay Road. Another option is to rent a bicycle or bring one — there are bike paths all across the island. Near the refuge, the Bailey-Matthews National Shell Museum is a fee area but it also has free parking. The museum consists of collections of shells and mollusks and has more than 30 displays.

The J.N. “Ding” Darling National Wildlife Refuge is a very popular attraction on Sanibel. A stop at the visitor center will provide much useful information, like which species of critters may be viewable during your visit. You can take a naturalist-led tram ride along the 4-mile paved road through the refuge, or opt for the self-guided wildlife drive. The best time for birding on the refuge is January through March when there is an abundance of shorebirds, waterfowl, and wading birds. Most any time during the year, some species are permanent residents.

The Sanibel Light (or Point Ybel Light), is located at the eastern tip of the island. Only the grounds are open to the public, not the lighthouse itself. The lighthouse finished construction in 1884 and is 98 feet tall. A fishing pier and shelling beach are located near the parking area for the lighthouse.

Although our original plans were simply to visit the St. Marks and Sanibel lighthouses, we saw many interesting and beautiful state parks between the two and discovered a region we will be happy to revisit in the future. Perhaps the most important thing we learned is to take time to enjoy the good nature of any state that we care to visit. That said, Florida’s Gulf Coast is a true delight to visit in your motorhome, no matter the season. 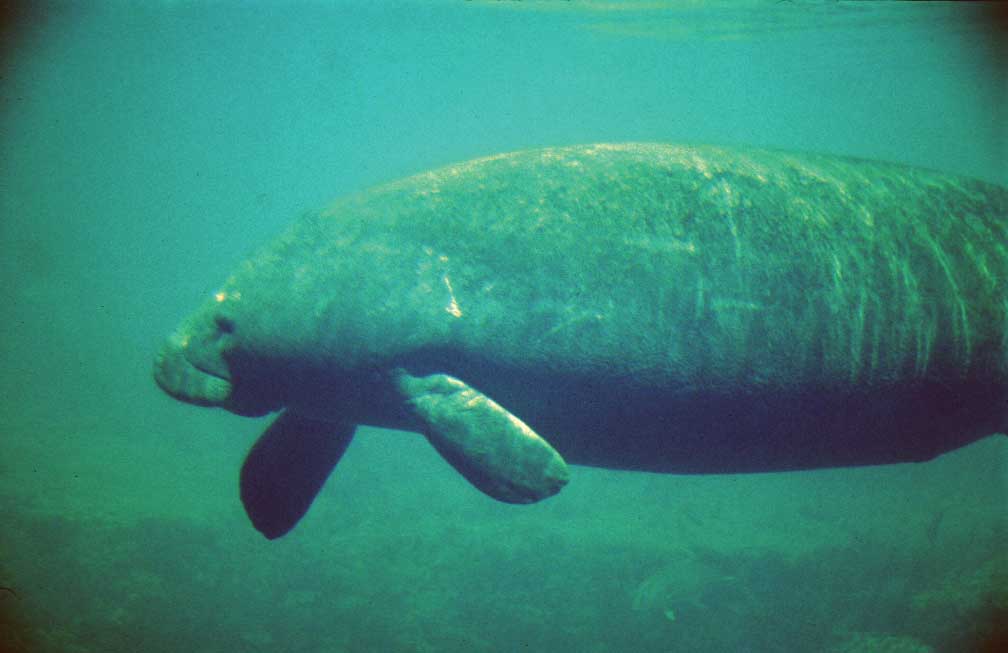