Four Places at Once?! 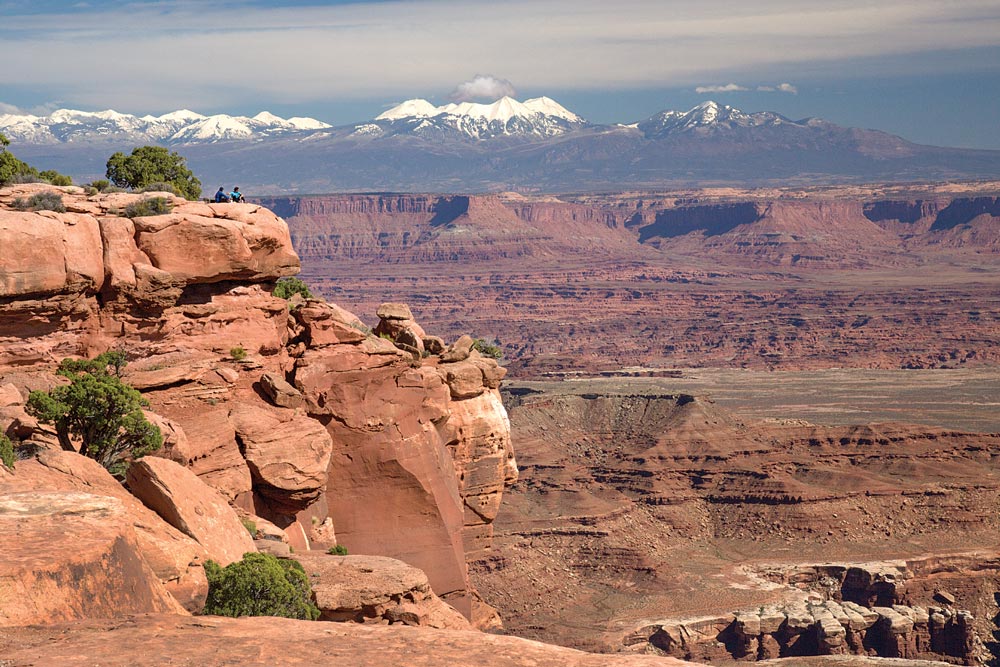 In the Four Corners region, RVers can visit multiple national parks, a national recreation area and an amazing national monument – all in less than 700 miles

Two rebellious young women boldly climbed onto a stone arch in Utah’s Canyonlands National Park, proudly defying the rules, when a voice sternly called, “Get off of there!” One of the brazen women daringly called out, “Do you work here?” A crowd of determined voices responded, “Yes, we do! It’s our park! It’s all of ours.” As the two women slinked off, I felt like applauding. The crowd was right, the national parks are our parks. They belong to all of us.

When President Woodrow Wilson signed the 1916 act known as the “Organic Act,” the existing 14 national parks, 21 national monuments and two reservations were placed under the new National Park Service (NPS). Today, the National Park System includes more than 84 million acres located in every state, the District of Columbia, American Samoa, Guam, Puerto Rico and the U.S. Virgin Islands. This past year, the NPS celebrated its 100-year anniversary.

A great starting spot to honor the longevity of the NPS is the only place in the United States where four states intersect at one point – Four Corners. Here, you’ll find the Four Corners Monument in a remote landscape where the boundaries of Colorado, New Mexico, Arizona and Utah meet. Part of the Navajo Nation, the monument draws visitors from around the world to take their turn touching four states simultaneously.

There’s a reason this overlook from the Island in the Sky section of Canyonlands NP is named Grand View Point. The White Rim in the lower right is made of ancient coastal sand dunes and lies 1,300 feet below the overlook; far below the rim the Colorado River continues to carve the canyon. In the distance are the La Sal Mountains, whose highest peak is 12,721-foot Mount Peale.

Canyonlands National Park, Utah: Described as wild America, Canyonlands consists of three vast, rocky wilderness sections known as The Needles, The Maze and Island in the Sky. Each region is separated from the others by two powerful rivers, the Green and the Colorado, whose waters

combine in the park creating some of the country’s most treacherous whitewater. Visit The Needles section, and you’ll be treated to a magnificent scenic drive as turn after turn you gaze upon towering red-rock cliffs. Stop the motorhome at Newspaper Rock to see a cliff wall filled with fascinating petroglyphs created by several ancient cultures – and that’s just the road going to the park. In the park you’ll see so much more, including The Needles, colorful red and white sandstone spires hundreds of feet high. The Maze features four-wheel-drive roads and primitive hiking; it’s one of the nation’s most remote areas. Island in the Sky is like an observation tower. A high mesa, it’s perched above a grand landscape with a phenomenal view. In an iconic Western panorama, you’ll see sculpted canyons, three stunning mountain ranges and serpentine rivers some 2,200 feet below. View the park closely by hiking to a canyon waterfall; walk to picturesque Mesa Arch; or visit Upheaval Dome, a puzzling 1,500-foot-deep crater that has scientists wondering about its origin.

The park has two developed campgrounds: Island in the Sky (first-come, first-served) and The Needles. Maximum RV length is 28 feet.

Arches National Park, Utah: Living up to its name, this park has the largest concentration of natural stone arches in the world. Containing more than 2,000 arches, the park’s longest arch is the impressive Landscape Arch. Imagine a professional football field from goal line to goal line; this arch would cover it with room to spare. Why are there so many arches? Geologists believe part of the reason is an ancient seabed left an unstable underground salt bed thousands of feet thick. The shifting salt layer, in conjunction with a fault and the forces of erosion, created a plethora of arches and other unique features. There’s Balanced Rock, the enormous 3,577-ton boulder precariously balanced on a rock base 128 feet high. There are sandstone fins, spires and gigantic monoliths. You can see part of the largest dune field in the history of North America at Petrified Dunes Viewpoint. As you admire the extraordinary sights, don’t miss those at your feet. Biological soil crusts are living groundcover that are critical to desert life. They help prevent soil erosion and can contain one of the oldest known life forms, cyanobacteria, along with some unexpected plants in a desert environment – fungi and moss. Watch for potholes! Not in the park roads, but in the sandstone. Potholes filled with rainwater are home to tiny creatures, including minute crustaceans known as fairy shrimp. 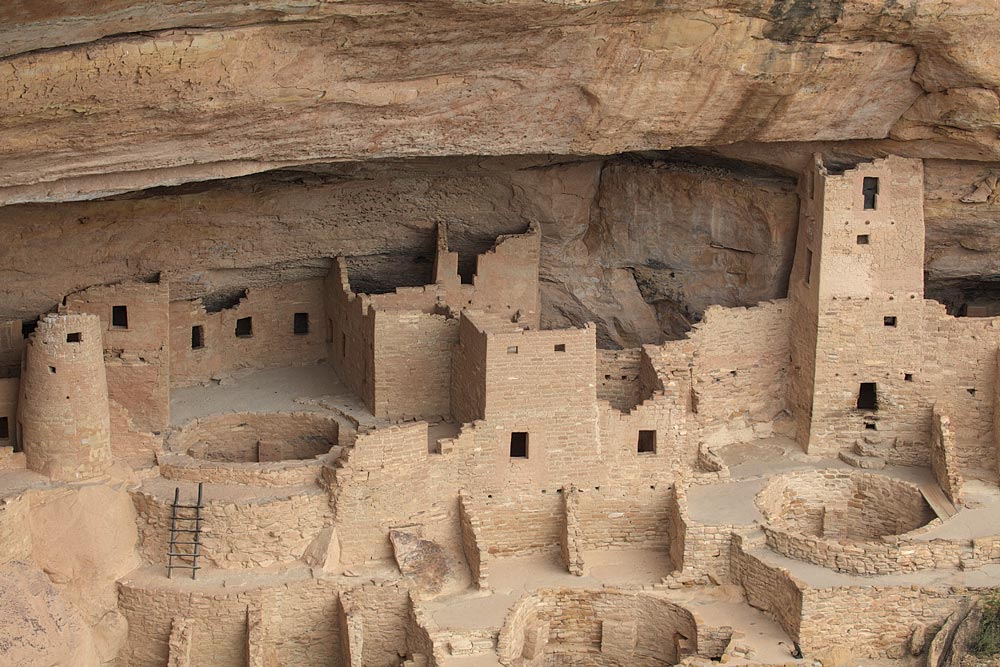 The largest cliff dwelling in North America, Mesa Verde’s Cliff Palace is housed in an alcove about 215 feet wide, 90 feet deep and 60 feet high. It was home to an estimated 100-120 people. Above the cliff overhang, on the surface of the mesa, is a red soil called loess. Spring windstorms bring this fertile soil from northeastern Arizona providing an environment that can support plants, including four types of wildflowers found nowhere else in the world. Mesa Verde means “green table.”

The park’s Devils Garden Campground, located 18 miles from the park entrance, will be closed through November due to construction, though there are many other campgrounds in the Moab area.

Colorado National Monument, Colorado: What’s in a name? The difference between a national park and national monument is simply that a park takes an act of Congress and a monument is established by presidential proclamation. In 1906, when John Otto arrived near Grand Junction, Colorado, and saw the rugged red-rock canyons, he advocated for a national park. Using a pick and shovel, he labored to create trails to share the scenic treasures hidden in the canyons. He collected signatures for petitions, wrote editorials and rallied the citizens of Grand Junction to send letters to politicians in Washington, D.C., to support his idea. President William Taft established Colorado National Monument in 1911. For magnificent views of the scenery, take the 23-mile Rim Rock Drive; be prepared for tunnels, sharp turns and steep drop-offs. The park’s brightly colored rock formations have intriguing names like Kissing Couple and Devils Kitchen. The 450-foot-tall natural rock formation known as Independence Monument was named and climbed by Otto; his tradition of raising the American flag on top of the monolith continues every July Fourth. For an easy hike, take the trails near the visitor center and see breathtaking canyon views or stroll the nature trail where you’ll learn interesting facts including: why Native Americans used juniper tree bark for diapers, and why you’re walking into the middle of an ancient sand dune.

The only established campground within the monument, Saddlehorn, does not have hookups or shower facilities. 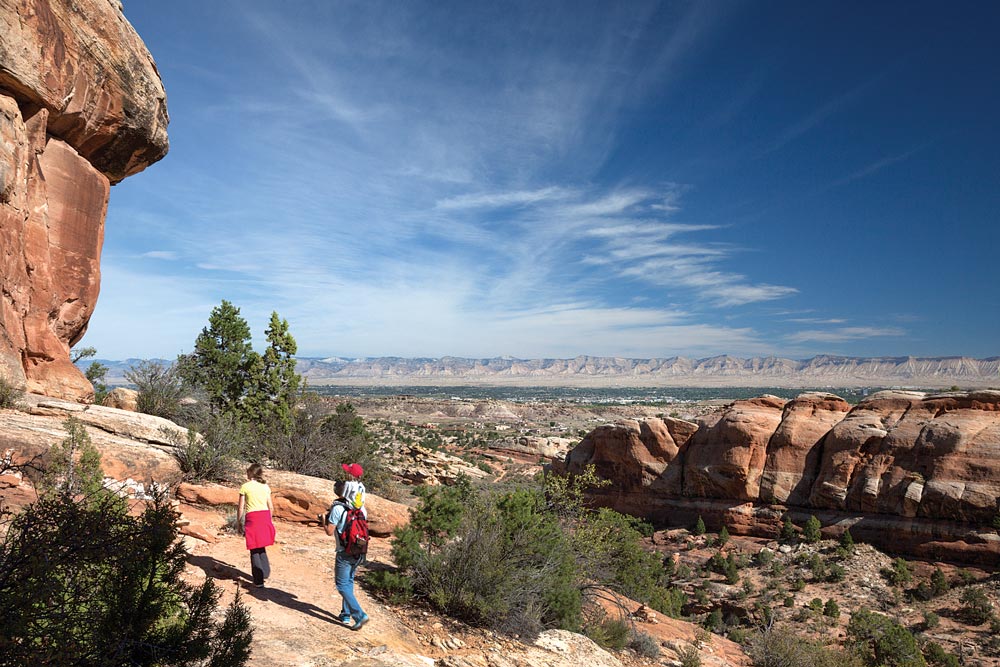 A family hikes to the natural rock room called the Devils Kitchen. In the distance is the town of Grand Junction, located in Colorado’s wine country.

Black Canyon of the Gunnison National Park, Colorado: It’s no wonder this steep V-shaped chasm is named Black Canyon; it’s so deep and narrow that little sunlight reaches between the jagged, dark rock cliffs. Early travelers found it foreboding and surveyors deemed it inaccessible. Yet in 1933, it was designated a national monument; in 1999, it became a national park. The Gunnison River, named for explorer Capt. John Gunnison, makes a steep, 2,000-foot drop as it travels through the canyon. The sharp descent creates a powerful river that when undammed during spring runoff could easily carry boulders weighing 700 pounds; due to the hardness of the rock, the water carves the canyon only 1 inch per century, or the width of a human hair per year. The park offers dramatic overlooks of the deep, sharply cut canyon. Be sure to stop at the Painted Wall. Here you’ll see natural three-dimensional light stripes decorating the dark rock of Colorado’s highest cliff. Measuring 2,250 feet, the Painted Wall is so tall that if you placed the Empire State Building on the canyon floor, it would only reach about halfway to the top of the cliff. Interestingly, the canyon’s top rock layer sits on the oldest rocks in the canyon – more than a billion years of layers are missing from the geologic record in Black Canyon. 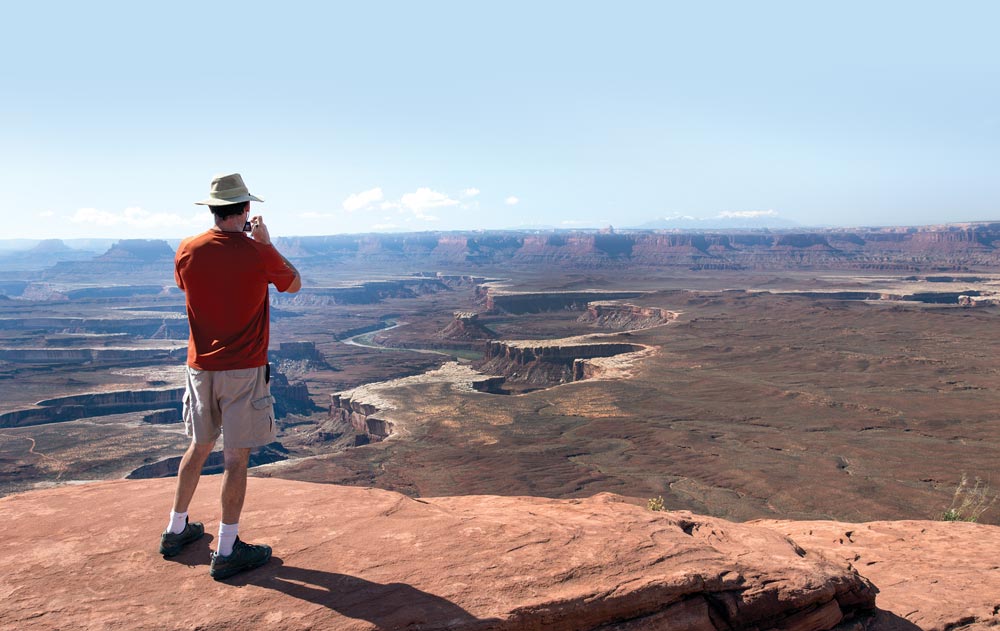 One of the majestic landscapes you’ll see from the Island in the Sky section of Canyonlands NP is at the Green River Overlook. Among the sights along the skyline is Cleopatra’s Chair, a sandstone formation in Glen Canyon National Recreation Area. Far below you’ll see the White Rim Road, a 100-mile backcountry four-wheel-drive wilderness road.

Curecanti National Recreation Area, Colorado: Adjacent to Black Canyon, Curecanti shares a unique history with the dark canyon. In 1901, Abraham Lincoln Fellows and William Torrence used a rubber mattress to float on the Gunnison River, entering the formidable canyon searching for a place to make a tunnel. They hoped to bring reliable irrigation from the river through the canyon wall to the nearby Uncompahgre Valley. Despite treacherous travel, they deemed a tunnel would be feasible, and construction began in 1905. Digging from both ends of the tunnel, workers dug 6 miles through parts of both parks, meeting in the middle in July 1909. The Gunnison Tunnel still brings water to the valley today. There are many recreational opportunities in the park. Formed by three reservoirs, the park includes Colorado’s largest body of water, 20-mile-long Blue Mesa Reservoir. Bring your fishing rod because it’s the largest kokanee salmon fishery in the state. Visit the Morrow Point Dam, go swimming, hiking or take a scenic drive. Enjoy railroad exhibits at the Cimarron Visitor Center or park the motorhome and let someone else drive you on a pontoon boat tour through the upper Black Canyon.

Views of Black Canyon as seen near the visitor center. Notice that despite the enormous cliff, you can’t see the river bottom. Abraham Lincoln Fellows described a portion of his 1901 float trip into the canyon saying, “… we saw before us the mighty jaws, from which there was to be no escape, a feeling of nervousness and dread came over me for the first time.”

Mesa Verde National Park, Colorado: The land formation isn’t a mesa. A mesa is a high landmass with steep cliffs; since one side gently slopes, it’s actually a cuesta. The 52,000-acre park was established in 1906 by President Theodore Roosevelt as the only U.S. national park created to preserve Ancestral Pueblo culture and prehistoric architecture. In 1978, the park became one of the country’s first World Heritage Sites, when the United Nations selected it, along with Yellowstone National Park, as two of the first 12 sites in the world to receive the recognition. The park showcases 600 cliff dwellings and nearly 5,000 known archaeological sites. With so much to see, where do you start? Park at the Mesa Verde Visitor and Research Center, where you can use a touch screen to browse nearly 3 million objects in the park’s collection. Drive through the park, stop at the overlooks and see the astounding architecture. Hike to a cliff dwelling for a close-up look. Cliff Palace is the largest in North America, with nearly 150 rooms. Spruce Tree House is the best preserved, and while the site is closed as of press time, it can be viewed from overlooks near the must-see Chapin Mesa Archeological Museum. Here you’ll see intricate Native American beadwork, early decorated pottery and learn about the ancient people who used river stones as tools to build elaborate cliff dwellings. 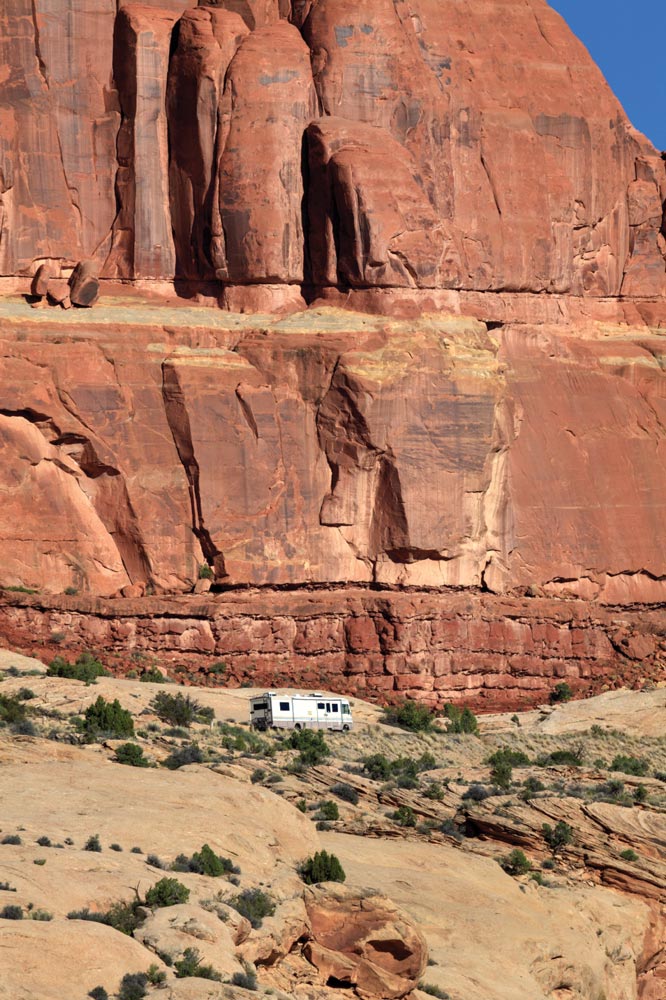