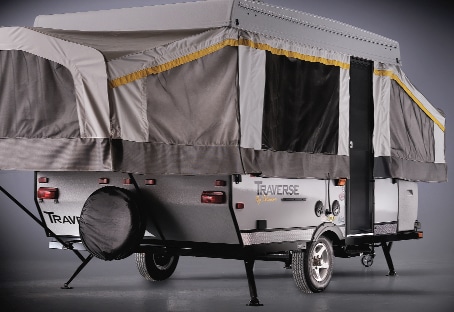 These days, folding camping trailers aren’t just tents on top of trailers. More often than not, they’re loaded with amenities that include stoves, refrigerators, furnaces, holding tanks, rugged off-road packages and, in some cases, air conditioning. A few even have hard fiberglass sides like traditional travel trailers that form A-frames in the campground and fold down neatly on top of the box for travel.

And there’s no small amount of innovation among pop-up manufacturers, whose goal is to get people outdoors enjoying the RV lifestyle, possibly for the first time.

The diminutive SylvanSport Go, for instance, is three trailers in one and is meant to appeal to serious outdoor aficionados while also being available for everyday chores.

“The Go is a piece of outdoor recreational equipment that happens to have wheels on it,” said Kyle Mundt, SylvanSport’s director of marketing and new product development.

The Go, besides being out of the ordinary, also wears the green mantle for being environmentally friendly, as do pop-ups from Livin’ Lite Recreational Vehicles, Jayco and Starcraft.

Then there are the hard-sided campers from Columbia Northwest/Aliner and Forest River’s Palomino and Flagstaff/Rockwood divisions that resemble travel trailers in the campground, but fold down neatly like soft-sided popups in the setup mode.

Choices abound for those looking to buy a folding camping trailer. Here’s a look at some of the more popular models available for 2012. And if you’re not personally in the market for these more diminutive trailers, share this guide with a friend and start them on the road to the RVing lifestyle that you and I already enjoy.

With eight floorplans in 12- to 19-foot lengths, the new Traverse series from Forest River’s Palomino division offers a variety of choices for campers looking for a high-end folding camping trailer.

Forest River has added hard-sided trailer layouts to its top-selling twin Flagstaff and Rockwood pop-up series. Available in five 13- to 15-foot floorplans with 10- to 12-foot interiors, the laminated fiberglass A-frame walls of the Flagstaff/Rockwood A-series fold down to create a 5-foot high box when in travel mode.

Jayco designs the Jay Series folding camping trailer with the family in mind. Each of the five Jay Series floorplans has a king bed along with a second queen or double bed and a convertible dinette. The 18-foot 2-inch Jay Series 1208 floorplan, the largest in the series, is equipped with a soft-sided dinette slideout along with a second portable dinette table and a stainless steel two-burner stove that can be taken outside.

Starcraft’s 2012 Comet pop-up has been certified green by TRA Certification, as has the whole company with its processes to reduce waste and wise use of natural resources in building its camping trailers and other towables. Equipped with a Customer Convenience package that includes a three-way refrigerator, awning, water purifier and stereo with MP3 inputs, the 2012 aluminum-sided Comet features five layouts – some with king and queen beds.

Adaptability is the key to British Columbia-based Lees-ure Lite’s diminutive Excel pop-up camper, which the company says has a dry weight of 225 pounds. Only 4 1/2 feet wide, the Excel can be towed by a small car or touring motorcycle. Each 5 1/2-foot long Excel is designed with two screen entryways, allowing an optional room to be added to each side. Standards include curtains, carpeted sleeping area, rain tarp and four screened windows. In the travel mode, Excel offers 30 cubic feet of storage and can carry 100 pounds of gear on a roof. Along with several other storage possibilities, options to customize the Excel include awnings, skirts, mattresses with removable covers, cooler racks and aluminum folding tables. MSRP $4,795.

Known for its hard-sided A-frame popups, Columbia Northwest has ventured into the more traditional folding camping trailer with the introduction of the Somerset series, available in three touring and two off-road layouts. With Columbia Northwest hiring management and production staff formerly with FTCA Inc., manufacturer of Coleman camping trailers, Somerset pop-ups are meant to not-so-subtly appeal to those campers left orphaned when FTCA closed its factory in 2010. Somerset G2G (Good to Go) features 12- to 14-foot boxes with 70- by 77-inch beds on each end along with convertible dinettes, stoves, refrigerators and cassette or flush toilets. Both floorplans in the off-road Somerset A3 have 12-foot boxes with beefed-up suspension, dual battery trays, LED interior lights and more fresh water. Base MSRP: $12,000.

A cross between a pop-up and a fiberglass travel trailer, Columbia Northwest’s 15-foot Aliner Classic is about as distinctive as a folding camping trailer can be. Available in two floorplans, one with a convertible sofa and the other featuring a permanent rear bed, Aliner’s Fome- Cor sidewalls and roof system fold down to create a 57-inch high trailer with a dry weight of 1,530 pounds that can be towed by just about anything.

Standard amenities include an outside shower, 3-cubic-foot refrigerator and microwave. An optional Titanium Package is available with LED interiors lights and a gray exterior with bold black trim. MSRP: $14,900.

Livin’ Lite Recreational Vehicles has created a niche for itself over the past decade with its lightweight all-aluminum folding camping trailers. Now it has introduced the high-sided Quicksilver XLP for 2012.

With sidewalls 30 inches high, the 14-foot Quicksilver XLP is designed with queen beds on both ends along with a side or rear dinette and is equipped with a standard refrigerator, furnace and range or grill – all operated with LP-gas. With a 1,499-pound dry weight, the Quicksilver XLP is towable by most cars. Other features include aluminum cabinets, interior lights, a cassette commode, exterior shower and aluminum rear deck and a storage box over the A-frame. MSRP: $10,999.

The innovative Go from SylvanSport isn’t just a camping trailer. It’s also designed to haul an ATV and other toys or to become a small open-top cargo trailer. For 2012, the Go – at 11 1/2 feet from coupler to bumper – has been tweaked with a new bicycle-style support frame, suspension, LED taillights and paint and graphics. When open and in the camping mode, the Go provides 6 feet 6 inches of headroom along with a 7-foot long bed. An Adventure Accessory Package includes a rear awning, table panels, two self-inflating mattresses and a spare tire kit. MSRP: $7,995.