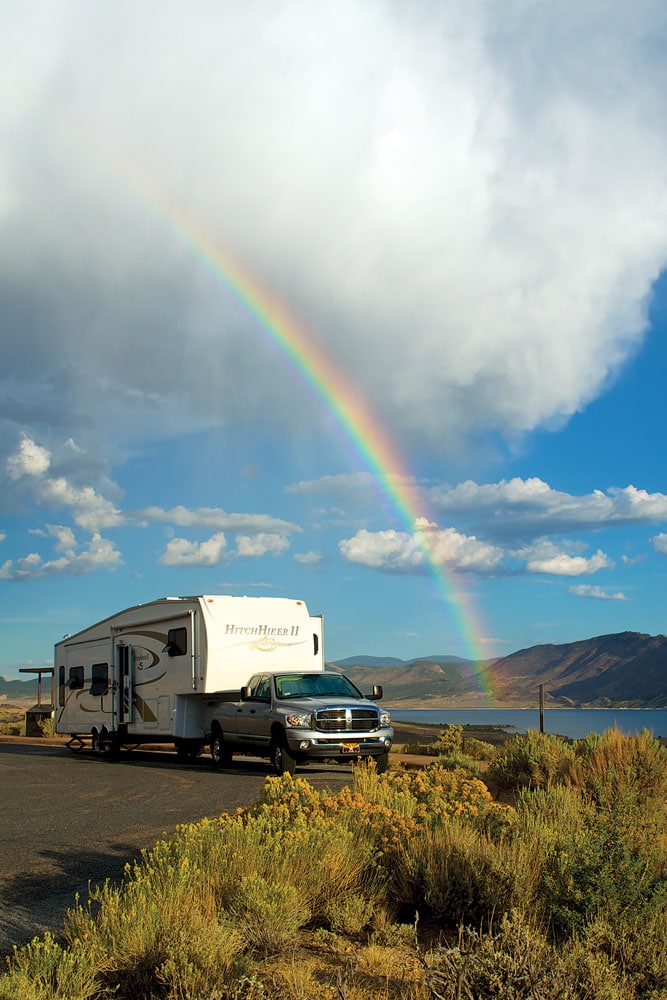 Flaming Gorge is exactly what its name describes: a spectacular, fiery canyon of towering red rocks carved into existence by the immense power of the sparkling Green River at its base. For millennia the river was a thin ribbon that snaked along unevenly at the bottom of the canyon, but the construction of the Flaming Gorge Dam and its accompanying National Recreation Area in the early 1960s created an outdoor lover’s paradise full of thrilling hikes, exciting mountain-bike rides, boating opportunities and camping. It is a wonderful place to go RVing with a trailer.

My husband, Mark, and I visited a few years ago with our 36-foot fifth-wheel. We saw the inviting name on the map and stopped by barely long enough to say, “Wow!” a few times and then say over and over, “We gotta go back!” When the opportunity came to return, we made a point to stay for nearly a week.

A rainbow crosses our fifth-wheel at Lucerne Valley

The Green River weaves south from its headwaters, the Wind River Range, a mountain range of the Rocky Mountains in Wyoming. The main watery trunk of Flaming Gorge runs north and south between Green River, Wyoming, and Dutch John, Utah, for about 30 miles as the crow flies. Its little fingers spread out to the east and west, creating a series of peninsulas on shore. At the southern end, the cliffs grow to 1,700 feet and turn red, standing out in dramatic contrast to the deep aquamarine of the water far below. Wyoming claims the northern half of the gorge while Utah got lucky and ended up with the more stunning southern portion.

We drove down the Flaming Gorge Scenic Highway on Route 530 along the western flank of the gorge, watching the scenery gradually become more and more beautiful around us. Stopping for lunch at a scenic overlook in Lucerne Valley, we soaked in the vast views across hayfields to the mountains in the distance. The Green River was a narrow band of blue in the distance. In summertime, the afternoon thunderstorms are frequent, and the first of several doozies swept through, darkening the sky to brooding shades. But the sun shone brightly from afar, and a brilliant rainbow shot out of the clouds into the lake. In the late afternoons we discovered that not only did rainbows bring radiant color to the sky, but during sunset the whole sky lit up like it was on fire.

Sighting rainbows became a daily activity, and on another day we were blessed with one that was wide and soft, filling the sky between the mountain peaks in the distance. Returning to Lucerne Valley Campground, our attention turned from the sky to the ground where we found a herd of pronghorn antelope had set up camp as well. They seemed to be the unofficial greeters for the campground, and they wandered unhurriedly between the RVs and tents, munching on the soft grass as they went. A few relaxed in the shade of trees, front legs tucked under them as they slowly watched us riding our bicycles past. These guys weren’t just tame, they were on vacation, too.

Between Lucerne Valley and the more famous part of the gorge to the south, we took a drive along the Sheep Creek Geological Loop. This scenic byway follows a narrow, twisty road between the craggy rock towers of the Uinta Fault. Far off the beaten path, we didn’t see anyone else on this pretty drive. However, it isn’t known for people-watching; it is known for bighorn-sheep sightings. We kept a sharp lookout. Finally, at the end of the drive we were thrilled to see two bighorn sheep grazing by the side of the road. They paused long enough to give us the once-over, but the grass was just too yummy to bother much with a pair of crazy tourists hanging out the windows of a truck, cameras held high and clicking away.

We had already had some peak experiences at Flaming Gorge, yet we hadn’t even made it to the official National Recreation Area. First we had to take the trailer up and over a steep pass to get there. It was pouring, and the roads were slick, but we drove slowly and stopped for a few hours at the magnificent Sheep Creek Overlook at the top. Mark hiked up even farther and took a magnificent photo of our rig in the midst of the jaw-dropping landscape. What a place!

Once the sky cleared, we made our way to the most remarkable part of the gorge at the Red Canyon Visitors Center and Red Canyon Campground next door. Here the landscapes are so dramatic that the photos everyone takes of each other make them look like they are standing in front of an artificial backdrop. There are lots of rocky outcroppings where you can shock your friends in the photos you bring home by perching on the edge of a cliff and dangling your feet over the edge.

One of the best hikes of the area, Canyon Rim Trail, goes along the rim of the canyon for a couple of miles from the visitor center headed east. We met older folks pausing to enjoy the views and little kids bouncing along with grins on their faces. The hike is an easy walk, and there is a sensational view at every step. Eventually the hike turns away from the rim and heads into the ponderosa pine woods. We followed this for a while, meeting up with quite a few mountain bikers, all of whom reported that it was a good ride and not too hard.

A boat cruises along the winding contours of the pristine landscape of Red Rock Canyon in Flaming Gorge, Utah.

Back at the campground, we dis-covered a herd of bighorn sheep had taken up residence. Other campers told us the herd had been there for weeks. They moved about the campground as a large unified group, and nothing seemed to faze them. For 15 minutes they stood in a cluster opposite us. They were so close that we could see one had a radio collar tied around its neck and the number 87 affixed to its ear. The park rangers here keep close tabs on the movements of this herd!

We stood staring at each other for so long that the youngest sheep in the group got bored after a while. As we took an endless stream of photos, two of the smallest sheep laid down on the ground between the legs of their elders. How ironic: We had been so excited to see two bighorn sheep for a fleeting moment on the Sheep Creek Geological Loop drive, yet here was a full herd in residence right at the campground.

The afternoon thunderstorms continued throughout our stay, and the rainbows made prompt appearances right alongside them. At the far end of the gorge we stopped for lunch at the Greendale Overlook, and a powerful storm sent us scurrying from the picnic table back to the trailer for cover. Our reward a few minutes later was a beautiful rainbow that framed the fifth-wheel. Two families that had been mountain biking came flying up the trail. They were soaked to the bone. They threw their bikes on the roofs of their cars and leapt inside before speeding back to the campground.

A little farther on we found the community of Dutch John, which had been built to house the workers while Flaming Gorge Dam was being built in the 1950s. We took a tour of the dam and were impressed by its mammoth height and breadth. The Green River had to be re-routed during the building of the dam, and that engineering feat alone is mind-boggling. The dam is 502 feet high and 1,180 feet long along its crest. But the astonishing immensity of the structure and the massive quantity of concrete necessary to build it didn’t really sink in for us until we learned that the concrete at the core of the dam won’t be fully cured until around 2060, a full century after the concrete was poured.

Inside the dam building an original turbine installed in 1963 was on display. It had been replaced with a new turbine in 2005. Flaming Gorge produces enough electricity to supply power to about 50,000 households, although water flow, water use and electricity production have been modified over the years to improve the environmental impact. Of course, this dam isn’t as sizable or historic as the Hoover Dam, but all of the dams that were built in the mid-1900s to tame the West’s most wild rivers and generate electricity are marvels for their sheer scale of engineering.

For us, however, the crowd of turkey vultures hanging around on the dam’s scaffolding outside were almost as intriguing as myriad facts about the dam itself. When we started our tour it began to sprinkle, and the flock of turkey vultures stared down at us from their airy perches looking a bit forlorn and drippy in the moist air. Fortunately for us, much of the tour was indoors in the bowels of the dam, so we escaped the worst of the dousing. When we emerged back into daylight, the sun had come out. Every single turkey vulture on the scaffolding around us was standing with wings fully outstretched, drying its feathers in the blazing sun. It seemed as if they were all welcoming the sun’s warmth with a big embrace.

Flaming Gorge is a place worthy of not just one visit but many repeat visits. While writing this story I discovered that we have an excuse to go back to Flaming Gorge once again because we missed one of the most beautiful hikes when we were there. Next time, we’ll definitely do the 7-mile Little Hole National Recreation Trail which snakes along the edge of the narrowest part of the Green River after it passes through the dam. Apparently, this is a “must do” hike because it is so pretty! And that’s the beauty of all the breathtaking national parks and national recreation areas scattered throughout the American West: it’s impossible to see and do it all in one visit, so we just have to keep going back.