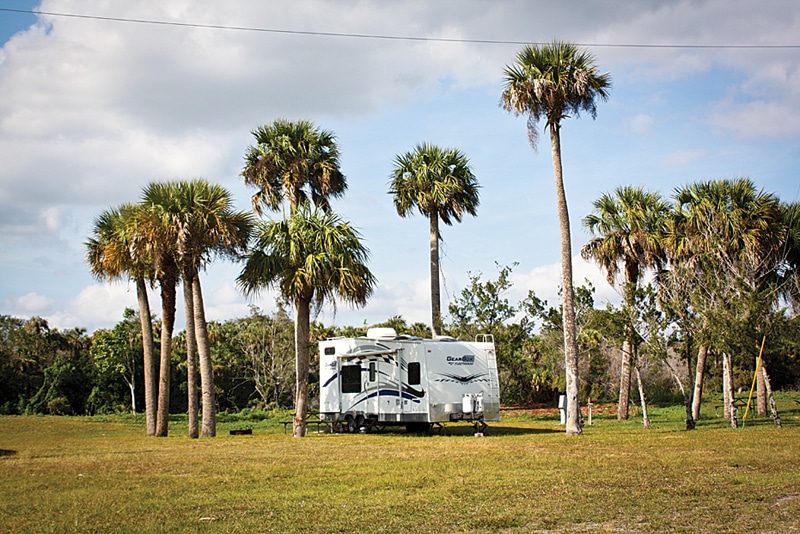 Florida’s tagline is the “Fishing Capital of the World.” The city of Stuart, population 15,000, must be its headquarters. Blessed with an abundance of water — the Atlantic Ocean and the St. Lucie and Indian rivers — the area offers world-class fishing and miles of sandy beaches. Yet, with a building-height restriction of less than four stories, development has been kept in check. The result is a sleepy, old-Florida feel.

Fishing has been a top draw for many years. The first non-native settlers exported pineapples and fish. President Grover Cleveland discovered the bountiful fishery back in the late 1800s. Dozens of charter captains continue to offer clients a chance to wrestle with a billfish or fill their coolers with fresh harvests. A rejuvenated downtown district full of unique shops, art galleries and restaurants offer activities for nonangling visitors.

The basic rule of thumb: East of Stuart is ocean, west is countryside. In between, it can be a tad bit confusing. In town, street name changes are common, as are traffic circles. Using both a GPS and a hard copy map is recommended. Find comfort in the fact that this is a compact area so it is difficult to be lost for very long. The St. Lucie River rambles around the city in every direction. Heading east, one runs into the Indian River, which is part of the Intracoastal Waterway, and lies just west of upscale Hutchinson Island. The aquamarine Atlantic Ocean forms the eastern boundary of this ritzy island.

A speedy sailfish leaps out of the water along Stuart’s coast.

The Fastest Fish in the Ocean

Aided by a streamlined body and long, swordlike bill, sailfish have been clocked swimming 68 mph. Readily identified by their huge dorsal fin, adults average 5 feet in length. When hooked, they take acrobatic leaps and dives, making them one of sportfishermen’s favorite quarries.

A population of sailfish live off Florida’s Atlantic coastline year-round. Large numbers migrate through Stuart via the Gulf Stream in early winter. They head back north en masse in spring.

Fishing for sailfish requires specialized equipment and techniques — things most average anglers don’t possess. Best advice: book a charter. Captain Scott Fawcett drags up to 36 hookless mullet and ballyhoo baits rigged on dredge teasers. The dredges resemble oversized mobiles and create the illusion of a school of bait. A ballyhoo bait is then trolled slightly behind. The dredge’s silhouette and vibrations draw the attention of sailfish who will strike the easy target: the solitary, rigged ballyhoo running behind.

When sailfish are particularly fickle, go fly a kite! Some fishermen use kites as outriggers, connecting the fishing line to the kite line via a clip. The kite holds the live bait up so it’s dangling on top of the water. It looks exactly like a struggling bait fish because that’s what it is. Wary sailfish can’t see the line or any hardware. They strike the bait and the clips detach the fishing line from the kite line.

Whether trolling dredges or kites, once you’re hooked up, strap on a fighting belt. Stand with your legs shoulder-width apart, thighs resting on the gunwale to help with balance. Listen to the crew as they shout out commands and enjoy the show. To ensure the future of this sportfish, catch-and-release practices are highly encouraged.

Other Fish in the Sea

This fisher-boy caught himself a mahi mahi.

While targeting sailfish, fishermen have a good chance of tying into dorado (aka dolphinfish or mahi mahi). This stunning species — marked in iridescent green, lavender, yellow and cobalt blue — makes tasty table fare. Dorado will readily take live or dead bait and a variety of plugs. They’re strong fighters and since they travel in schools, multiple hook-ups are common. Fill up the ice chest and enjoy grilled dorado for dinner.

Resident fish of many species live here all year long, though migrations directly influence what anglers target. Use sabiki rods to catch live bait around buoys. To locate fish, look for frigatebirds. These large, black birds follow baitfish around. Search for subtle changes in water color, temperature or currents that mark an edge and go fishing throughout these areas. Captain Fawcett remarks that trolling around or drifting over wrecks and the six-mile reef are always good options. Purchase a map at the local tackle shop and target these areas. He notes, “Snappers and grouper can be caught by bottom fishing these areas. Pair a 6/0 Penn Senator reel (sans a levelwind) with a 6-foot rod. Spool it with 50-pound test braided line and a 4-foot fluorocarbon leader; attach lead to the bottom of the rig. Be sure to check regulations before you harvest fish; they’re constantly changing.” Regulations and licenses can be found at www.myfwc.com or at area tackle shops.

The Indian and St. Lucie rivers provide excellent inshore fishing opportunities. St. Lucie South Campground and Phipps Park occupants can choose to bank fish on either side of the St. Lucie locks. Captain John Meskauskas recommends packing a 7-foot medium-to-light action rod spooled with 15-pound braided line and a 40-pound leader (24 inches long). “You can purchase shrimp at bait shops or cast net small finger mullet; use a 4/0 circle hook. Otherwise, tie on an artificial lure. Soft plastic saltwater jerkbaits work well. In winter the snook are in the deeper holes of the river; bounce a jig off the bottom to find them. By spring they move up the banks to warm up. They really hammer DOA shrimp and Hogy jerkbaits then. In summer the snook move toward the inlet to spawn. Snook season is closed then. You can still fish for them but they must all be released. Quite often a bait boat sets up near the inlet selling pilchards and greenies.”

Tarpon arrive during the spring mullet run and can be found cruising along the beach. They take residency in the river all summer. Spool a large spinning reel with 50-pound braided line and a 60-pound fluorocarbon leader onto a 7-foot, 25-pound class rod. Tie on a topwater plug such as a chug bug. In fall, massive schools of mullet run along the beach. They are followed by large jack crevalles, tarpon, sharks and snook. Anglers hook on a mullet to try to entice a bite.

The Stuart area offers incredible bank, surf, inshore and offshore opportunities. Hiring a captain on the first day of your vacation is a great way to find out the hot spots and patterns. They will explain the tides and provide insight into this remarkable fishery. Afterward, launch your own boat (landings marked on maps) or rent a boat from the Marriott on Hutchinson Island.