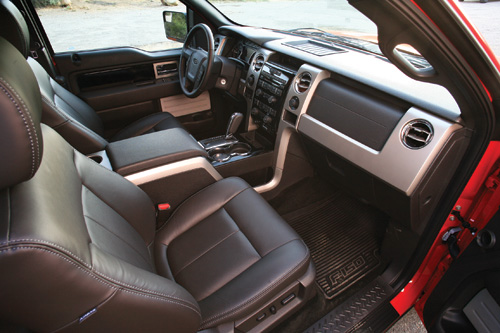 But the real buzz is being created by the much more interesting 365-hp 3.5-liter Ti-VCT twin-turbocharged EcoBoost engine. The 3.5-liter EcoBoost is specially tuned for a truck application and incorporates turbocharging and direct fuel injection for an impressive claim of 420 lb-ft of torque at 2,500 rpm. Ninety percent of that torque is delivered starting as low as 1,700 rpm and continues to 5,000 rpm. The 2011 F-150 also boasts a maximum trailer tow rating of 11,300 pounds with that engine. Those figures closely match the beefy 6.2-liter V-8. It sounds perfect for towing.

Aside from inspiring power numbers, the new F-150 EcoBoost also delivers other class-leading and -exclusive perks that enhance its overall abilities. Among the highlights is a convenient and fuel-saving six-speed automatic transmission as standard equipment for each engine choice, and energy-saving electric power-assisted steering (EPAS) found on all but the 6.2-liter-powered model.

The SR80 six-speed automatic transmission now features SelectShift, which makes it possible for the driver to engage the shift lever into the “M” position for manual mode and then toggle a switch on the side of the lever up or down to choose the most appropriate gear for the driving situation. As a result, it’s easy to drive the truck, as opposed to the letting the truck drive itself. The new six-speed automatic also offers progressive range select, allowing upper gears to be locked out while towing on steep grades, and helping to keep downhill speeds under control. In addition, the transmission features a wider ratio span for a lower final drive ratio and a double-overdrive gear, both of which help to improve overall fuel economy.

The new EPAS system tuning is software-based, so the steering can be programmed and customized to each truck model based on wheelbase, weight and powertrain. It improves handling by offering a more nimble drive with less effort on- and off-road, and during parking maneuvers.

Across the F-150 line, more interior content is available, and the new 4.2-inch LCD message center and larger in-mirror rear view camera are two of our favorite new features. Navigating through the extensive driver and vehicle information menu is easily accomplished through manipulating a button with your thumb on the steering wheel. The screen on the rear view camera can be zoomed in — helpful for close-up jobs like hitching up a trailer. And our test model carried the FX Luxury Package which, among many things, included power adjustable pedals, a power sliding rear window, a premium six CD/MP3/AM/FM stereo system, remote start, a reverse sensing system and power/heated driver and passenger front seats.

Best of all the interior content, though, might be the integrated trailer brake controller that made its way down to the F-150 from the Super Duty. It’s controlled through the new 4.2-inch LCD productivity screen that is smack dab in the center of the driver’s console. Along with trip data, fuel economy and other truck apps — such as the useful tire-pressure-monitoring system — drivers can name and change a trailer in order to track mileage and store gain settings via the trailer brake controller on the instrument panel, delete trailers, alter gain settings and choose a type of trailer connected and go through a connection checklist.

Once we went through our checklist and settled into the comfortable and luxuriously padded driver’s seat of the Race Red 2011 F-150 4×4 SuperCab, we pulled away and felt the tug of the trailer. While certainly not pushing the truck to its limit, the Cruiser RV Fun Finder X-214 WSD would give us an idea of how the new Ford F-150 with the EcoBoost would perform when tasked with towing a moderate-size (24-feet overall; about 5,000 pounds wet) trailer through the winding mountain roads of Southern California.

The new F-150 offers a front end made up of a double-wishbone independent coil-on-shock suspension. A Hotchkiss-type live axle with leaf springs and outboard shocks makes up the aft end. From the technology side comes AdvanceTrac with Roll Stability Control, in addition to the newly gained Trailer Sway Control system, another nice new feature handed down from its big brother Super Duty series. The mix created a well-controlled ride quality that kept us comfortable and secure. We did wish for better side mirrors — the one thing missing. However, overall visibility is good, and towing ride and handling quality are outstanding, allowing us to haul the trailer at highway speeds without any sign of sway or untoward behavior. 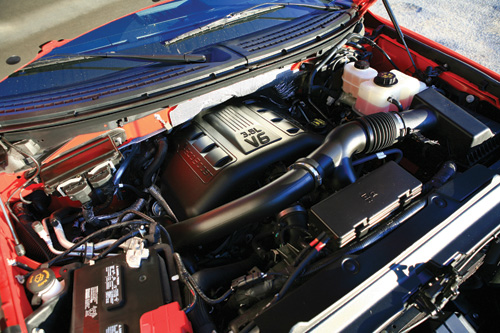 On long flat highway stretches, the truck immediately settled down into sixth gear and cruised at 55 mph at around 1,700 rpm. But we suspected from the get-go that the stellar non-towing fuel mileage averages we had been achieving would diminish, and they did to a certain and justifiable point, especially so when we were confronted by hills. Because the turbos are so active during acceleration under the heavy load and especially when climbing, much more fuel was consumed.

Power-wise, the truck had little trouble pulling the hills, stayed in fourth gear in tow/haul mode, and it made sport of slower traffic. The truck is a hot rod when unbuckled from the trailer and with only slightly more than two tons on its tail it still didn’t feel chained down. That’s not to say we were rambunctious on the road, but we could really move if we needed to. It would have done that all day long if it had not been for the truck’s 26-gallon fuel capacity. At the levels of fuel consumption we were seeing, a long trip towing, especially with a heavier trailer (and this truck is rated to tow more than twice what we were hauling), would have more pit stops involved than we would like to deal with. A 36-gallon tank is available in some 2011 F-150 models, but not with the EcoBoost. 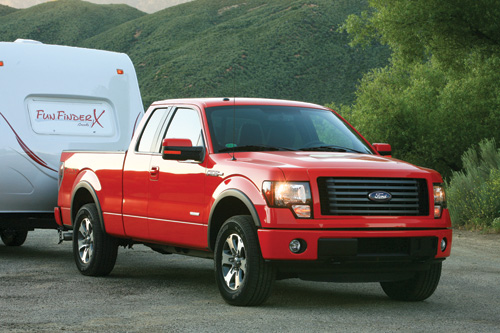 The 2011 Ford F-150 with Ecoboost is an ideal vehicle for the weekend camper who wants an effecient truck during the week.

The 2011 Ford F-150 powered by the 3.5-liter V-6 EcoBoost engine offers a powerful, yet fuel-efficient (solo) option for those looking for a new way to achieve the best of both worlds. In our opinion it is designed to best serve the weekend towing enthusiast, delivering good gas mileage when unloaded and towing power when needed.

The interior of the EcoBoost F-150 is quiet, thanks to features like a noise-absorbing headliner, door seals and high-tech sound engineering.