Fall in (Love With) Cape Cod 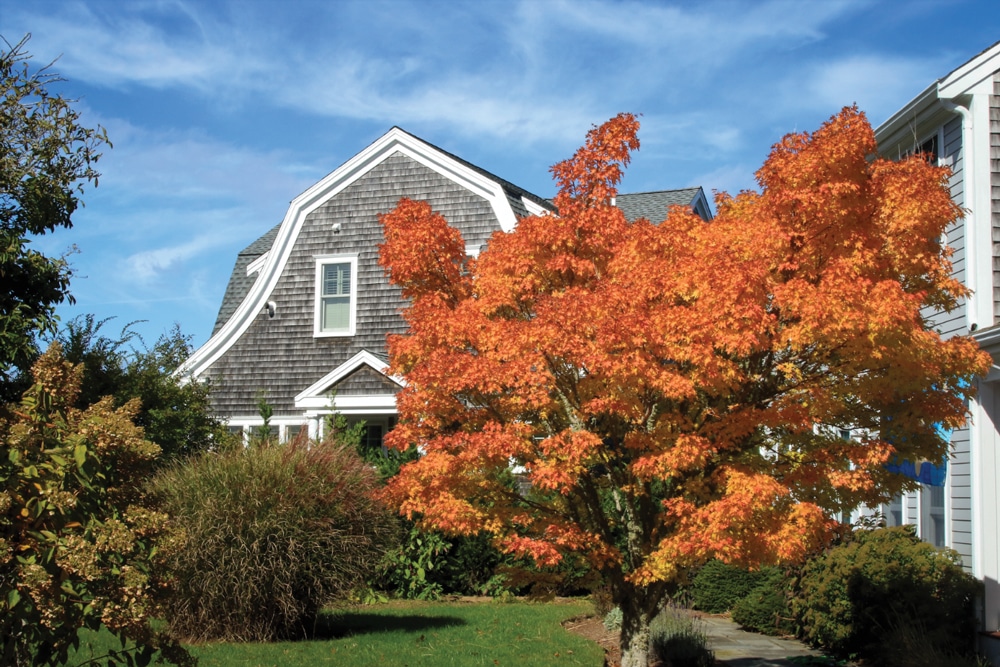 With shoreline, shopping and the namesake architecture, the popular Atlantic coast jewel lives up to its billing as one of the most beautiful destinations in the region

Like many RVers, I’ve long wanted to visit Cape Cod. Tell someone you’re going to “the Cape” and they know it’s Cape Cod, one of the most beautiful places on the Atlantic coast. Cape Cod serves up miles of beaches and quaint villages filled with vintage clapboard houses and picturesque lighthouses. The 160-mile Cape makes a perfect RV getaway – except that in summer the roads can be clogged with tourists. So, we decide to take an RV road trip to this gorgeous part of the world during October, when the weather is still lovely, yet the crowds have gone home.

We’ve driven the RV to Cape Cod from Washington state and, frankly, it’s been a LONG journey and not one without challenges. A fridge on the fritz in our motorhome necessitates stops at two RV repair shops and a massive accident on Interstate 80 causes an hour-long detour. When we finally arrive and cross the Sagamore Bridge on Cape Cod’s state Route 6A, we’re shocked at the traffic slowly snaking along. It’s October. Isn’t this supposed to be the off-season?

It is the Cape’s “quiet season,” but we’ve arrived on Columbus Day weekend, a huge, last-ditch holiday on the East Coast. In the West, we don’t much celebrate Christopher Columbus, but on the Atlantic coast, Columbus Day means parades and late-season escapes to the Cape. When we finally stumble into the Bay View Campground in Bourne, the sun has set and we’re spent. We’re too tired to take advantage of Bay View’s three pools, ice cream parlor, or coffee shop. Instead, we walk the pup around this large RV park and then, despite some road-noise, sleep soundly in our full-hookup site.

We wake to cool temps and cloudy skies. We study a map we picked up from Bay View and see that the Cape has two main roads: state Route 28 that angles along the south shore; and U.S. Highway 6 (and SR 6A) that cuts through the heart of the Cape (Mid Cape) and north to Outer Cape. Between the highways, there’s a maze of roads that connect a couple of dozen towns and villages and we’re grateful for our GPS.

We head to the cute-as-a-button burg of Sandwich and realize that while the villages are postcard-quaint, the roads to them are windy and narrow. Best advice? Park the motorhome and use the dinghy vehicle for exploring. And that’s exactly what we do.

By the time we cruise into Sandwich, rain spatters the windshield so we decide to make this a museum day. We drive to Heritage Museums & Gardens, a historic 100-acre estate that showcases the collections and gardens of the wealthy family that owns pharmaceutical giant Eli Lilly. The sprawling property, open mid-April through early October, offers an impressive antique auto museum, rotating art exhibits, a labyrinth and maze, a working 1908 Looff carousel and multiple gardens, including The North American Hydrangea Test Garden.

We dash from the parking lot to the massive, two-story Shaker barn that houses Josiah K. Lilly III’s incredible 40-car collection. In 1926, Lilly began collecting and preserving cars and his treasures include a 1915 Milburn Light Electric (top speed 20 mph), a 1932 Auburn Boattail Speedster driven by playboys like Errol Flynn, a 1927 Lincoln Sport Touring car, and a flashy 1931 Duesenberg Model J Derham Tourster driven by actor Gary Cooper. The Dusenberg can go 100 mph in second gear and gave us the saying, “It’s a Duesie.” There’s also the 1909 White Steamer that belonged to President William Howard Taft that helped make the automobile an everyday American necessity.

With the rain coming down hard, we forgo strolling the gardens and take an electric guest train to the carousel. Like kids, we scramble aboard the tallest, most bejeweled horses and enjoy the round-and-round ride. Afterward, we explore diverse exhibits – old toys, antique weather vanes, New England earthenware, military miniatures, historic guns, bird and duck molds, and more.

It’s late afternoon when we cruise back into town and we head for CafÃ© Chew, a popular breakfast and lunch spot, where we feast on thick pastrami and smoky barbecue brisket sandwiches. Then we’re off to the Sandwich Glass Museum, an expansive glass exhibition that tells the story of glassmaking in Sandwich. We stroll through rooms filled floor to ceiling with glass cups, saucers, bottles, pitchers, plates, figurines, lamps, and more in a rainbow of colors. We learn that Deming Jarves (1790-1869), “the man who turned Sandwich into glass,” revolutionized glassmaking by inventing the machine to inexpensively produce glass. 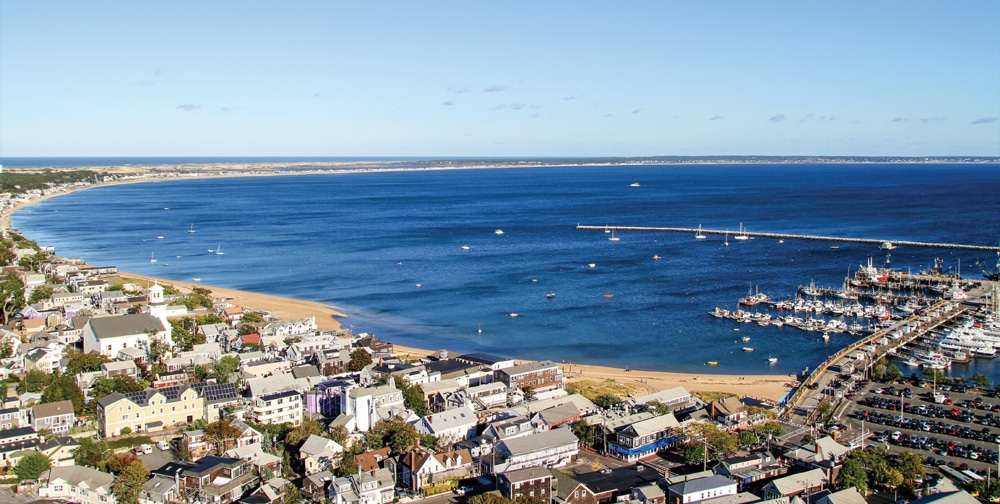 The view from the top of the 252-foot Pilgrim Monument in Provincetown shows off the Cape’s iconic curve.

The next morning, we wake to better weather and head to Hyannis, the town the Kennedys made famous. For anyone who experienced John F. Kennedy’s presidency, the John F. Kennedy Hyannis Museum is a must-see. This impressive brick building is filled with photos and artifacts that tell the story of the Kennedy family and “how they lived like locals here,” John Allen, the museum’s executive director, tells us. The museum gives a highly personal look into America’s first royal family, including the special relationship between brothers John and Bobby and an in-depth look at Rose Kennedy, the family’s matriarch. 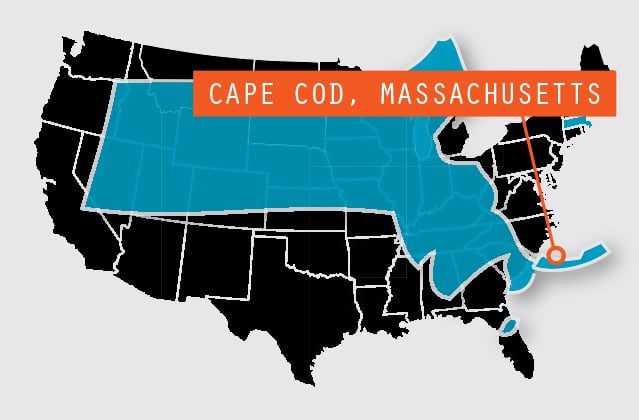 Getting There:
Cape Cod is approximately 90 minutes southeast of Boston. From Boston, take Interstate 93 south to MA-3 S toward Cape Cod. Continue for approximately 40 miles, and take Exit 6 for MA-132 toward Barnstable/Hyannis.

The JFK museum leaves me feeling both proud and sad, so we walk downtown Hyannis, poking through boutiques, including the dog’s favorite, Pupcakes! pet boutique. Then we head to the harbor and explore the Hyannis HyArts Artist Shanties, colorful, art-filled shacks. We buy cups of chowder from Black Cat Tavern and settle into waterfront Adirondack chairs to watch tugs, lobster boats, fishing charters and day sailors. I breathe in the salt air and begin to relax.

We overnight at Old Chatham Road RV Resort, a wooded, 55-acre campground that’s filled with residential park models. We set up beneath pines and oaks and our gravel-topped full-hookup site proves level, quiet and dark.

We eat breakfast at The Daily Paper, a popular spot in Hyannis. My lobster-stuffed omelet, chunky home fries, and locally roasted coffee hit the spot. Today, we’re exploring Chatham, one of the prettiest villages on the Cape. We meet our friends Celeste and Lou, who own a second home here, and they enthusiastically lead us through their favorite shops – Monomoy Salvage, Maps of Antiquity, Blue Water Fish Rubbings, Yankee Ingenuity for Cape Cod gifts, Cuffy’s of Cape Cod for inexpensive T-shirts and sweatshirts, and my favorite, Chatham Candy Manor.

Then we hike backroads filled with Cape Cod-style homes, fishing docks, a historic gristmill, and the Atwood House & Museum/Chatham Historical Society, a surprisingly impressive collection of nautical artifacts and historical memorabilia from early Chatham. At the Chatham Light, we check out a plaque and the propeller from the boat made famous in the movie “The Finest Hours” about heroic Coast Guard efforts to save shipwrecked fishermen from the area.

Columbus Day crowds have thinned and, the following day, we head to Orleans to meet farmer Dave Ross for a half-day cranberry tour. Since the 1800s when whalers kept cranberries fresh in water-filled barrels, the fruit has been an important economic engine for the Cape. A dozen of us stroll Dave’s 40-acre Little Scoop Cranberry Farm, walking between bogs, and low-lying fields surrounded by dikes. During harvest, they fill the bogs with water and scoop up the floating fruit with machines. 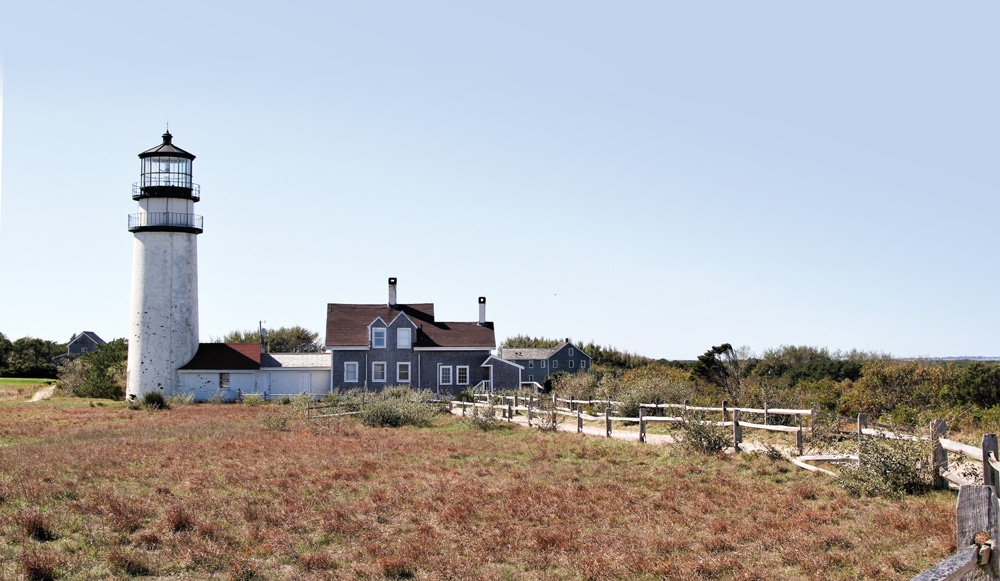 We bid Dave goodbye and, munching on chocolate-covered cranberries, head north on U.S. 6 to the Cape Cod National Seashore, 40 miles of seashore and 40,000 acres of dune-filled beaches, salt marshes, and hiking and cycling paths. At the visitors center, we pick up a map and learn it was President Kennedy who preserved this exquisite area. On Nauset Beach, despite the cool temperatures, dozens of hearty New Englanders walk, fish and even nap, and we take the dog for a long, waterside walk.

Continuing north on U.S. 6, we’re treated to expansive views of beach and water along Cape Cod Bay and the Atlantic Ocean. In Provincetown, the farthest village on the Cape, we check-in at Coastal Acres Campground, a 1970s-style campground with grass and sand-topped sites under the pines. The campground may lack modern amenities, but the friendly and generous managers, and the camp’s walking-distance location, make it one of our favorite RV parks.
For dinner, we head to The Mews, an upscale restaurant offering delights like seared scallops with house-made fettuccine and, for me, creamy lobster risotto. Back at Coastal Acres, we sleep deeply, lulled by the sound of waves.

We’re up early to explore Province-town. The narrow streets are busy with visitors, especially women, and we learn that we’ve arrived during Women’s Week, a celebration of all things female. Comedian Lily Tomlin is in town, but, alas, tickets have long been sold out.

Provincetown’s outstanding landmark is the Pilgrim Monument and Provincetown Museum, a 252-foot spire that’s the country’s tallest, all-granite structure. Pilgrim Monument was completed in 1910 to honor the first landing of pilgrims in North America. We’ve all heard about Plymouth Rock, but, in fact, the 102 pilgrims landed here first in 1620. Five weeks later, probably in response to the Cape’s fierce winter weather, they sailed on to Plymouth Rock and into the textbooks.

We explore displays about the town’s whaling, sailing, and fishing history and then set out to climb the monument. I’m pleasantly surprised that it’s a relatively easy jaunt since the builders added 60 short ramps amid the 116 steps. At the top, we’re treated to stunning views of the town and Cape Cod Bay’s deep-blue water.
We spend the next two days enjoying Provincetown – sipping waterside cocktails at Aqua Bar; buying warm fleece at one of the many boutiques; eating salt-water taffy while strolling the dock and marina. By the time we leave this beautiful, beachy town, we’re feeling relaxed.

Our last day, we meander back down the Cape, stopping at Truro Vineyards in North Truro for lunchtime wine tasting. Then we drop the rig at Cape Cod Campresort & Cabins, a 10/10*/10-rated Good Sam Park in East Falmouth with paved big-rig sites, private patios with fire rings, and Adirondack chairs under shady pines. I’m tempted to hang out in this gorgeous RV park, but we’ve got reservations with Mike Morrison of Scorton Creek Kayak.

At New Seabury Marina, we haul our one-person kayaks to the beach and slip into glass-still water. The day is glorious – sunny with bright blue skies, but the chill in the air lets us know that fall has officially arrived. For the next two hours, we paddle tree-lined Mashpee River and beautiful Popponesset Bay, circumnavigating a small island filled with herons and egrets. As I gaze at the setting sun, I breathe deeply and grin like a kid. I’ve succumbed to the magic of Cape Cod.