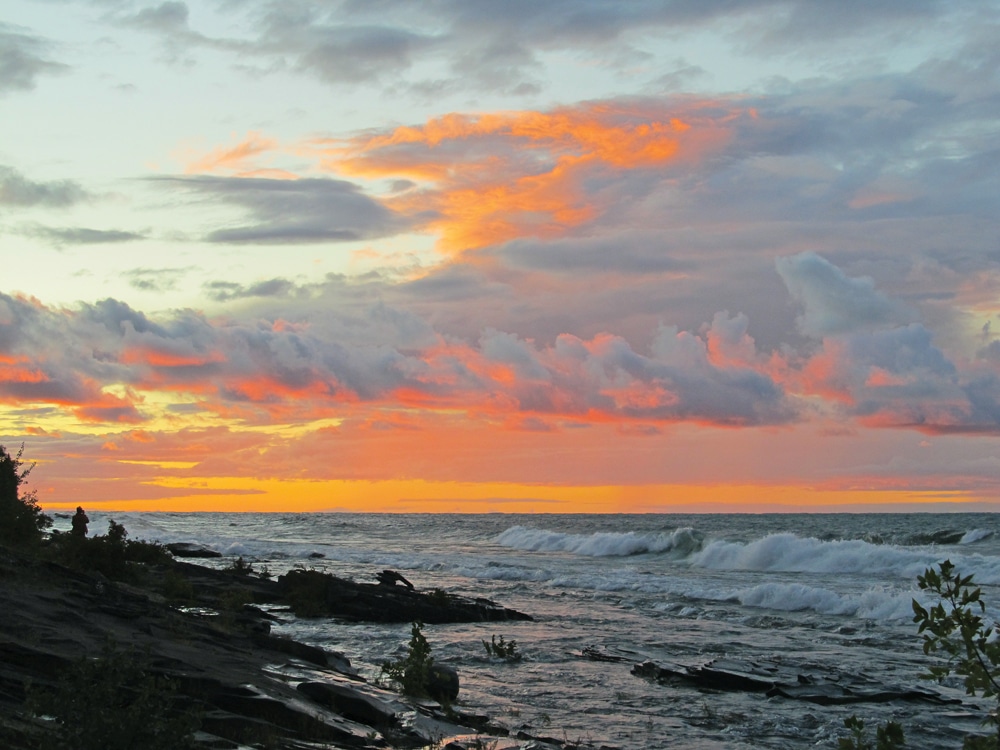 When I started planning my summer of RVing around the Great Lakes in Michigan, I shared my schedule and asked for feedback from other RVers and online friends. It was an ambitious itinerary because I wanted to see a lot of the state parks starting on the east side, through the Straits of Mackinac, the shores of the Upper Peninsula from end to end, into the Porcupine Mountains, then come back south along the west side – the “Gold Coast” of Michigan.

Waves roll in along the shores of Union Bay Modern Campground as the sun sets on Lake Superior.

Many people said, “I can’t wait to hear what you think about the Porcupine Mountains; I have lived in Michigan for years and have never been over there.” I asked why, since everything I read made the Porcupine Mountains seem like an absolute “must-see” in Michigan. They all agreed, but most people said they were perfectly happy with other places closer to their homes.

About halfway around the state, as I wondered if I had time to stick to my entire itinerary, I thought if I had to cut something, it would be the Porcupine Mountains. Even now, it’s hard to find words to express how glad I am that I didn’t make that cut. After I wound up spending about three weeks in the “Porkies” (its affectionate nickname), all I can say is that’s as good a definition of neglect as I’ve ever heard – to have this resource in your own home state and not get to know it.

The official name is Porcupine Mountains Wilderness State Park and it certainly deserves the “wilderness” designation, containing 60,000 acres with the largest tract of old-growth hardwood forests west of the Adirondacks. But as contradictory as it sounds, a big part of that attraction is that it is accessible wilderness. The roads getting there are sound; the scenery along the way spectacular, and the destination and all its attractions makes the journey more than worthwhile.

I was pleasantly surprised when I arrived at the park’s Union Bay Modern Campground. I thought since I would be way up in the mountains I would have to view the lake from a distance, so it was wonderful to discover the 100-site campground had some spaces with electricity suitable for large motorhomes right on the shores of pristine Lake Superior. The sunsets melting into the lake from the campground are breathtaking and rainbows make frequent appearances.

In expressing my delight with the park and all the activities and nearby attractions, and in sharing how so many longtime Michiganders said they had never been here, Park Ranger Jimmy Newkirk told me he understood.

“You have to really want to come here because it is not ‘on the way’ to anything else,” he said. He acknowledged that it’s more than 40 miles to the nearest Walmart and his family really has to plan its shopping trips for major supplies, but he found the lifestyle here so compelling and peaceful, it was worth the extra efforts. Newkirk said it’s definitely “a park of contrasts” – wild and contemporary at the same time, a designated wilderness area with city water and modern conveniences. Really, what more could you ask for? It’s a true mecca for rock hounds and birders, fishermen and hikers, and the park offers organized and guided programs to accommodate these interests.

Enjoy the sights and sounds of Presque Isle’s waterfalls and cascades.

The nearby small town of Ontonagon offers enough shopping for most necessities, and there’s also a concession and souvenir store right by the campground entrance. There’s even a small laundry facility within the campground (just a couple washers and dryers, but still a great convenience). My cellphone and air card for Internet access, as well as satellite TV, worked great here, too.

As it turned out, it was perfect timing for my arrival in the Porkies. Although I hadn’t planned on it as part of my visit, I arrived the day before the seventh annual Porcupine Mountains Music Festival held at the Winter Sports Complex within the state park, just about a mile from the campground. I hadn’t been to a live music fest in more years than I care to admit, so I decided to take advantage of the great timing – yet another lucky decision.

The festival setting itself is quite gorgeous: on a hillside of Peace Hill that allows you to see the stage in the foreground, with the sparkling vastness of Lake Superior as a backdrop. Ecologically responsible, the organizers of the festival have a self-imposed ticket limit of 1,250 per day to reduce the footprint on the park. When I was there, the crowd numbered in the low hundreds, and what a great group of folks they were, super friendly and fun. The grounds include a 20,000-square-foot ski chalet with all the modern conveniences and food opportunities. But you can also bring your own coolers with food and beverages, along with your own mats or chairs for seating. For an all around fun-filled family event, there’s also a children’s activity area.

There are two fully equipped stages, as well as the Busking Barn for acoustic performances where you can see the artists up close, so there is always something to groove to. And with such diverse music styles – there was multicultural music, soulful New Orleans-style rhythm and blues, reggae, bluegrass, and even “Yooper” (U.P.) conga beats – there’s something for everyone to enjoy.

There are two fully equipped stages, as well as the Busking Barn for acoustic performances

The three-day weekend, with the sights and sounds of music and the sometimes gentle and other times raucous waves of Lake Superior, set among the breathtaking vistas of towering virgin timber, held some of the best times I’ve had in my 10 years of RVing around this country.

After the festival, I made my first stop at the park’s extensive visitors center and was intrigued by the short video that shared an overview and history of the Upper Peninsula, including its copper mining and logging history, and a panoramic interpretation of the park with detailed maps and helpful rangers to assist in planning any kind of outing you can dream of.

During the next couple of weeks I enjoyed nearby Presque Isle so much I wound up going back twice. The old-growth hardwood trees rooted alongside the Presque Isle River here as it flows out into Lake Superior are the perfect companions along the well-maintained paths, boardwalks and stairs, with the sweet song of waterfalls as nature’s musical accompaniment along the way.

One of the most popular spots and best-recognized photographs in the Porkies is Lake of the Clouds.

One of the most popular spots and best-recognized photographs in the Porkies is Lake of the Clouds. As breathtaking as it was in late summer, I had hoped to stay long enough to see the surrounding trees don their fall colors. There’s so much to explore within a reasonable distance, I could be happily occupied here for months. The weather was perfect in late August, and I was tempted to move here until I heard it’s not uncommon for 300 inches of snow to fall per year.

Summit Peak is another well-known adventure in the Porkies, and as the highest point in the park at 1,958 feet, the view from the observation tower is not to be missed in any season.

Despite having to adjust my schedule for the rest of the trip, the Porkies ended up being my favorite stop in the entire state and the people of Michigan were some of the friendliest I’ve ever met. And even though I saw much more than I could have imagined, there was still so much I missed. I regretted having to leave and have often said since that I left part of my heart there. That’s why I’m already planning my next trip to the Porkies.