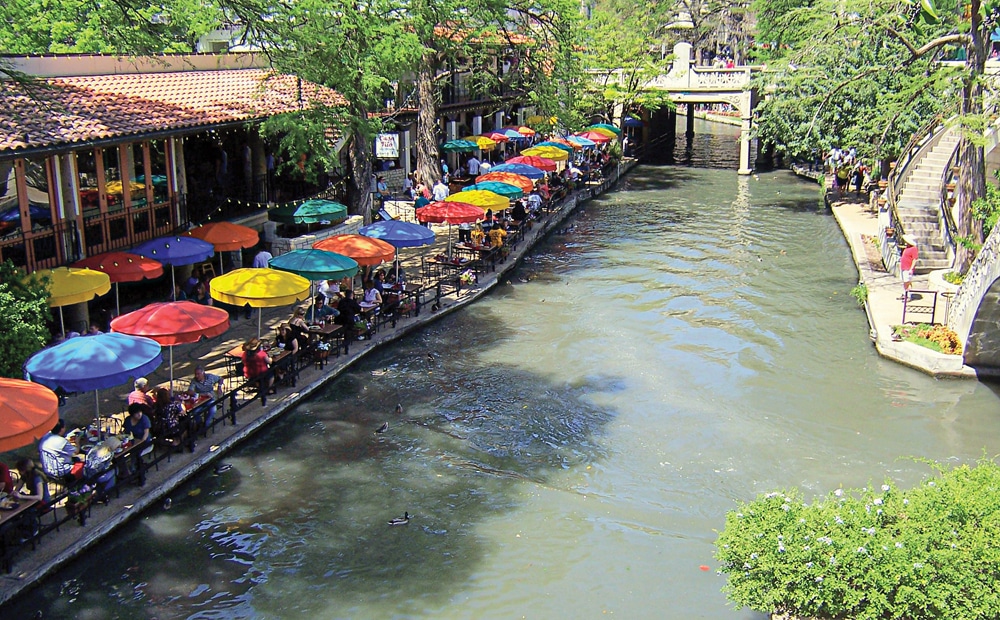 I tend to avoid big cities in my explorations of our country. Having grown up in the hustle and bustle of the San Francisco Bay Area and spending much of my life in the Phoenix, Ariz., metropolitan area, I am usually quite content to look for removed, less populated destinations when I travel. However, when my sister and brother-in-law invited my wife, Sharon, and me to join them in San Antonio, Texas, I was quick to accept, with visions of seeing the famous River Walk at last. Sharon’s acceptance was more tempered, as she saw just another big city.

Throughout much of San Antonio’s history, the San Antonio River was a blessing and a curse. It was a blessing because in the Southwest water is both uncommon and precious. The vast majority of major Southwestern cities trace their origins at least in part to rivers and the presence of water. San Antonio is no exception. On the other hand, the river has been a curse because it brought flooding to the heart of the city. It took more than one flood to convince the city fathers of San Antonio that something had to be done. Fortunately, when a decision was made to take care of the problem, San Antonio didn’t settle for simple flood control.

From that curse of floods and a muddy, unsightly stream, the city created a wonderland of walkways, bridges, shops, restaurants, and upscale hotels. The San Antonio River is controlled by an upstream dam and channeled through the heart of the city. During construction, the river channel was deepened. As a result, the River Walk is below the level of city streets so visitors don’t have to contend with downtown traffic. You can explore on foot or on one of the many flat-bottomed tour boats.

These tour boats embark from a series of boarding wharves all along the River Walk, making them convenient to take regardless of your starting point. Tours typically explore a segment of the River Walk and return you to your point of origin. Boat pilots maintain a constant chatter about what you are seeing as well as some of the history of central San Antonio. I can’t vouch for the accuracy of what they will tell you since embellishment seems a common trait of anyone giving tours, but it sure is entertaining.

The banks of the River Walk are lined with restaurants and stores and the entire length is like a botanical garden with a combination of flowers, colorful awnings over riverside outdoor restaurants, and the vacation attire of visitors. As we glided on the water, passing a steady stream of boats headed in the opposite direction, I noticed that wild ducks seem to like the River Walk as much as humans. They weren’t the least bit concerned with the heavy boat and foot traffic and only added to the ambiance.

The pathways along the river allow for exploration of the many shops that line its banks, but they also require you to climb up and downstairs as the walkways lead to different levels. The paths also lead to pedestrian bridges over the river at random intervals. I wondered how easy it would be for someone with mobility problems to explore the River Walk, but realized there are options – river taxis stop at marked landings to pick up or drop off passengers. Another possibility is to use the major hotels and shopping centers with their escalators and elevators to travel up to street level and then back down at another point of access. There are enough of these to serve as a feasible route along the River Walk.

Many restaurants along the River Walk offer outdoor seating under colorful umbrellas. While Tex-Mex is common fare, you can find almost any type of food you desire. During the mid-to-late-1800s, a substantial number of German immigrants made their home in and around San Antonio, and their culinary expertise is evident in many restaurants’ menus.

Of course, the River Walk is not San Antonio’s only attraction. When it comes to this city, most people think of the Alamo. But as significant as the Alamo is in Texas history, it is actually only one item in a sweep of history around San Antonio that dates back 300 years.

In the Southwest, the influx of Europeans began with Spanish soldiers mesmerized by visions of gold. Perhaps it was all Cortez’s fault; if he hadn’t found out the Aztecs had rooms full of gold, the soldiers might have packed up and gone home to Spain. By the time they got to Texas, around the beginning of the 18th century, they had tempered their quest for gold and began introducing Christianity to the Native Americans. At that time, almost the only other people besides soldiers willing to travel on their own that far north were monks. Thus the first Europeans the Native Americans encountered in what is now Texas were Franciscan monks and a few soldiers who accompanied them.

After first attempting to establish missions in east Texas, the monks moved their settlements west to the San Antonio River. For much of the 18th century, the missions struggled to survive, and by the 1780s the Franciscans had left, turning the churches over to non-monastic clergy or abandoning them together. One of those abandoned was San Antonio de Valero, which would become known as the Alamo, named for the hometown of Mexican soldiers stationed there. A presidio and community known as San Antonio de Bexar emerged around the old mission and Spanish troops took over.

At the beginning of the 19th century, events moved rapidly in Mexico and the Southwest. Spain’s power over the new world was slipping, and the people of Mexico sensed an opportunity to make the country their own. By 1821, the Spanish were gone and Mexico was an independent country.

But the conflict didn’t end. By the 1830s, the population of Texas was, for all practical purposes, at war with the Mexican government. It came to a head in 1835 when a rag-tag army of settlers calling themselves Texians threw a Mexican army out of San Antonio de Bexar and began to fortify the buildings of the old mission. In late February 1836, the Mexican army and President Lopez de Santa Anna nearly caught the Texians by surprise. A 13-day siege ensued, and on March 6, 1836, Santa Anna’s troops broke through and killed nearly every Alamo defender.

The battle of the Alamo became the symbol of Texas’ liberation, and in less than a year, Santa Anna and the Mexican army were defeated by Texians shouting, “Remember the Alamo!” Santa Anna himself was captured, and Texas gained its independence.

The Alamo today bears little resemblance to the Alamo of the battle. Only the chapel, the Long Barracks Museum and a well remain of the original fortifications. The chapel was nearly destroyed by artillery in the battle and was restored to its present appearance in the 1850s when the U.S. Army used the site as a post. Nevertheless, a visit here cannot help but trigger a sense of solemnity over the terrible cost to the men who fought for Texas’ independence.

Learn more about the Alamo’s 300-year history with a walk along the illustrated Wall of History and reflect on the past while strolling through the Alamo Gardens.

Four other missions established during the early days of Spanish settlement still remain south of downtown San Antonio. All are open to visitors, and all remain active Roman Catholic parishes. They are scenic examples of both the hopes and the disappointments of the Franciscan missionaries who sought to bring Christianity to the Native Americans. Churches from the 1700s anchor the sites, along with outbuildings and residences. Foundations mark churches planned but never built. Walls and sally gates serve as reminders that life was never completely safe in the missions. The National Park Service and the Roman Catholic Church have cooperated in their preservation for more than 25 years.

The headquarters and an excellent visitor center are at Mission San Jose y San Miguel de Aguayo on Roosevelt Avenue on the south side of town. This mission is the best preserved and the largest but lacks the wonderful sense of being far from the urban hustle and bustle of the city that you experience at the other missions. Directions to all the missions are available at the visitor center.

As it happened, our trip coincided with spring break – not a good idea if you can avoid it. The River Walk was crowded and the long line of people waiting to go into the chapel at the Alamo was daunting. I was told the best time to see the chapel is early on a weekday. At the River Walk, it’s best to take the boat tour when you first arrive.

If you are approaching San Antonio from the west, on Interstate 10, and don’t mind staying about an hour northwest of the city, we recommend Kerrville-Schreiner Park in Kerrville. In addition to providing an easy route into the core of the city with the River Walk and the Alamo, the Kerrville location also allows you to take in the delights of Texas Hill Country. In Fredericksburg, there’s an exceptional World War II museum, the National Museum of the Pacific War, and a slew of tasty German restaurants. The Hill Country is justifiably famous for wildflowers during the spring.

There are numerous RV parks and campgrounds in and around San Antonio. The closest to the city center is Travelers World RV Resort, with 165 paved, full-hookup sites. Another choice is Admiralty RV Resort, which is 20 minutes away from the central attractions.

Avoid taking your motorhome into the city, as San Antonio’s streets are not RV friendly. Instead, drive your dinghy and park near the River Walk or Alamo.

Yes, San Antonio is a big city, as my wife anticipated. But it is a big city rife with considerable history and alive with worthwhile attractions.