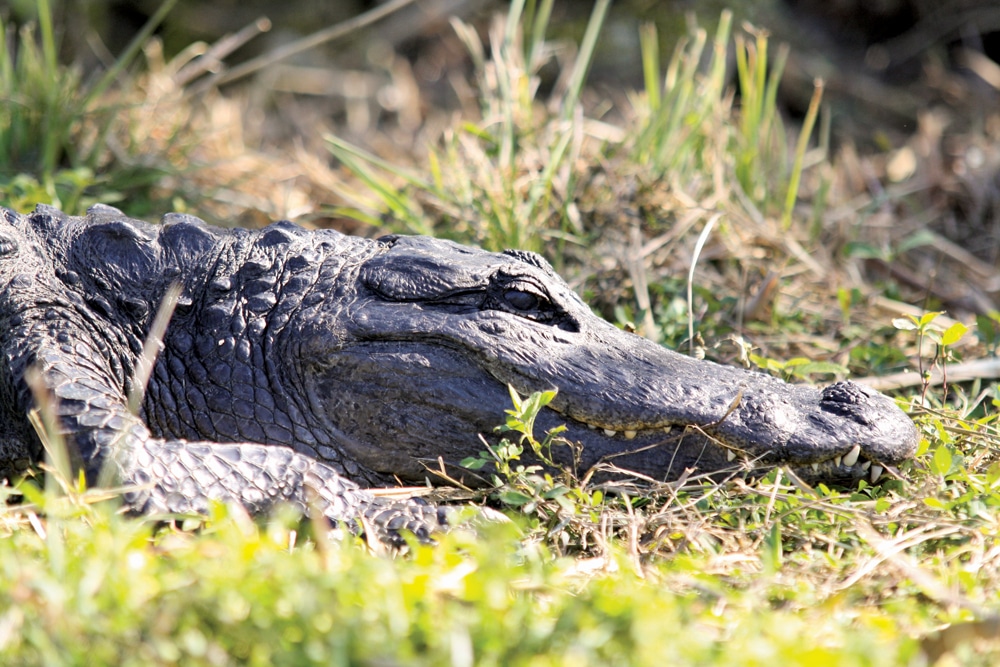 I’ll admit it: we watch reality TV shows set in swamps – the ones where gutsy gals and gritty guys search for enormous reptiles. So in a quest to learn more about our country’s wild creatures, my husband, Bob, and I made a detour last spring during our trip to Florida. After leaving the Florida Keys, we turned our Class B motorhome toward America’s largest subtropical wilderness.

After stocking up on food and fuel in Florida City on U.S. Route 1, we arrived at the Everglades National Park entrance on State Road 9336. Since the park comprises a whopping 1.5 million acres, we needed to prioritize our time. At the bustling Ernest Coe Visitor Center, a helpful National Park Service (NPS) ranger marked our brochure map with enough must-do activities to fill the next three days.

We cruised down the flat, lightly traveled main park road through 38 miles of pine forests, cypress swamps and sawgrass marshes to Flamingo Campground on Florida’s tip and, at the road’s end, checked into a site with 50-amp electric service.

At the Flamingo Visitor Center and marina perched on Florida Bay, we learned the 2005 hurricanes Wilma and Katrina had irreparably damaged the park’s only lodge where my late father loved to stay for fishing trips. Plans for a new lodge complex are stalled by financial and environmental considerations. But by arriving in a self-contained RV, we could spend peaceful nights inside the park and enjoy a noncommercial, “old Florida” atmosphere, just as my father had done decades before.

Sitting on shaded benches, we listened to a “naturalist’s knapsack” talk about sharks and other creatures that live in Florida Bay, the expanse of shallow water in front of us. We could see a bird colony standing on a sandbar and watched the occasional angler, kayaker, canoeist or power boater set off to enjoy the bay. Some had brought their own gear and others rented it from the marina.

After watching a pair of West Indian manatees cavorting in the harbor, we walked over to the marina’s small convenience store and reserved space with the NPS concessioner for a backcountry boat tour the next morning.

On the one-mile trip back to the campground we parked at the Eco Pond, a highlight the ranger had circled on our map, and took an easy, half-mile walk around its circumference. Birds rule in this placid spot where we stalked herons, egrets and ibises with our binoculars as they waded in search of food. A colony of roseate spoonbills stood foraging near a distant bank, fluffs of cotton-candy-pink reflected in the still pond water.

We had heeded NPS advice to prepare for mosquitoes year-round and applied repellent before approaching any of the park’s ponds. But a brisk breeze kept our campsite almost bug-free, temperatures dropped into the 60s by sundown and we slept comfortably after preparing dinner in our motorhome.

Blessed with a sunny spring morning, we drove back to the marina and boarded the twin pontoon “Sawfish” with six other visitors. As our captain motored north through the narrow, three-mile Buttonwood Canal, he pointed out crocodiles sunning themselves along the banks as alligators swam nearby. It was a serendipitous sight. South Florida is the only place in the world where these two species coexist.

Our boat glided past nesting birds and dense mangroves, following the Wilderness Waterway into Coot Bay, Tarpon Creek and finally Whitewater Bay. We returned to
Flamingo after almost two hours and vowed to take a second excursion that heads south into Florida Bay on our next visit.

That afternoon, we attended naturalist Bob Showler’s “Croc Talk” at the marina store by the canal, a reptile hangout. The ranger invited us to take a look through his spotting scope and, with replica skulls, explained the physical differences between the threatened American crocodiles and more common American alligators we were viewing.

A male anhinga bird along the aptly named Anhinga Trail dries its striking plumage in the sun.

The next morning, we packed up and drove north to the Royal Palm Visitor Center near the park entrance to enjoy an Everglades treat accessible to all, including those who use wheelchairs. The unfenced Anhinga Trail, just eight-tenths of a mile roundtrip, led us through sawgrass marshes populated by critters galore. Long-necked male anhinga birds spread their bold plumage to dry in the sun a few feet from our path while gators snoozed in the muck. Cormorants swam for fish and young anhingas clustered in trees adorned with blooming red bromeliads.

Saying farewell to the south part of the park, we drove north on Highway 997 to U.S. Highway 41, the Tamiami Trail, and turned west 22 miles to the Shark Valley Visitor Center where we re-entered the park. We bought tickets and boarded an open-air covered tram for a two-hour excursion into the Shark River Slough narrated by a park-trained naturalist guide. (Visitors can also walk or bike the trail with their own or rental bicycles.)

The Shark Valley tram takes visitors down a 15-mile paved road deep into the Everglades where an observation tower gives a great view.

The tram driver stopped often for views of wildlife on both sides of the 15-mile trail: mother alligators guarding their babies, soft-shelled turtles, wading birds, newly-hatched anhingas and visitors peddling bicycles. Although we did not see any snakes, our guide shared the saga of invasive Burmese pythons, some longer than 17 feet, that multiplied out of control after people dumped unwanted pet snakes in the Glades.

At the end of the paved road an hour into our tour, we got out of the tram and walked past a pond teeming with more gators than I could count. We climbed a spiral ramp leading to Shark Valley’s concrete observation tower where a 360-degree view of the Everglades awaited. I gazed across miles of open space with no end in sight, named the “River of Grass” by the late journalist Marjorie Stoneman Douglas who championed the creation of the park.

A mother gator watches over her young as the Shark Valley tram slows down to give passengers a look.

At the tour’s end, we concluded our park visit and drove west through the Big Cypress National Preserve to Collier Seminole State Park’s campground where we would spend the night. South of the city of Naples, this park is a rare natural habitat for Florida royal palm trees and contains one of only three native stands found in the state.

Well worth the gradual climb, Shark Valley’s observation tower provides a panoramic view of the “River of Grass.”

We had heard much during our three days in the Everglades about catastrophic environmental damage caused by decades of dredging, draining and building in South Florida’s tropical wetlands; we are grateful that the park was established in 1947 in an attempt to save them. While exploring the state park, we came upon a symbol of that destruction: the last existing Bay City Walking Dredge, a machine built in 1924 to carve the Tamiami Trail through the Everglades and Big Cypress.

We had come in our motorhome to South Florida looking for a swamp, some gators and fun, and found all that plus a good deal more – a vast wilderness where visitors are surrounded by wild beings living in their natural habitats. We had learned that this was a designated World Heritage Site and Wetland of International Importance. We realized that there was much more to see and do in Florida’s Everglades National Park, and that the River of Grass will have new things to teach us when we return.