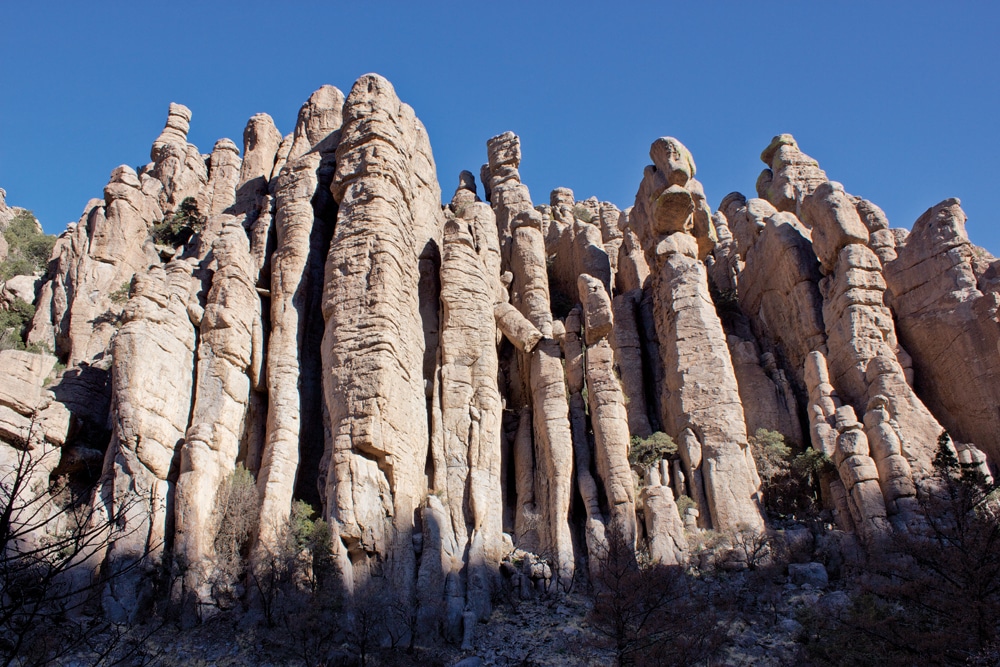 During a recent two-month trip in our motorhome, my husband, Jim, and I joined the migration of snowbirds seeking sunshine and adventure in Arizona. As our sojourn drew to a close, we spent five days in Cochise County, Arizona, exploring natural and historic sights in the southeastern corner of the state.

The Organ Pipe Formation in Chiricahua National Monument is among the unusual rock formations that dominate the landscape.

Our first stop was Kartchner Caverns State Park, 10 miles south of Benson. The caverns were discovered in 1974, purchased by the state in 1988 and opened as a state park in 1999. Two tours of the pristine limestone cave are available. Highlights of the Throne Tour include one of the world’s longest soda straw stalactites, measuring more than 21 feet; the 58-foot tall Kubla Khan, the tallest and most massive column in Arizona; plus 45,000-year-old bat guano.

On the Big Room Tour, visitors enter the largest room in the cavern at 400 feet long and 240 feet wide. It contains the world’s most extensive formation of the creamy white brushite moonmilk flowstone. “Cave turnips,” speleothems shaped like turnips that hang from the ceiling, were first discovered in the Big Room. Exhibits at the Discovery Center explain the unique features of the caverns and how water, minerals and time – 200,000 years and counting – created these magnificent formations. Kartchner Caverns offers RV sites with electric hookups.

We drove to Palomitas, a small town near Bisbee, and parked our motorhome at a friend’s house. Using this as our home base, we had several days to explore the area. Ready to stretch our legs, we rode our bikes along the San Pedro River with our host, Al, and his two Dobermans. The San Pedro Riparian National Conservation Area contains more than 56,000 acres of public land between the U.S.-Mexico border and the town of St. David. This area is a favorite of birders since it supports more than 350 species. Thirteen trailheads, some with interpretive kiosks, are located along this 40-mile stretch of the river. During our stay, we also accessed the riparian area at San Pedro House, hiked the trails, listened to birds and relaxed near “Bailey,” the 80-year-old cottonwood that is more than 36 feet in diameter.

The next day, we explored sights near Sierra Vista. Since Jim is an amateur birder, a must-see sight was the Ramsey Canyon Preserve, run by The Nature Conservancy. Ramsey Creek is a key tributary to the San Pedro River. We had the good fortune to get an impromptu tour from Brooke Gebow, southeastern Arizona preserves manager for the Conservancy. She told us how technology has changed birding. With a smartphone app, people can identify a bird by its call and post a rare bird sighting on the Southeast Arizona Rare Bird Alert website. Within minutes of an alert, avian aficionados will arrive to see birds like the elegant trogon, sulphur-bellied flycatcher or berylline hummingbird. The best birding is from March through September; the hummingbird migration peaks in April and August. Guided nature walks are offered from March through October.

Flanking Sierra Vista to the west and north, Fort Huachuca is a military post founded in 1877. It played a key role in the settlement of southeast Arizona and the 1886 capture of Apache chief Geronimo. The fort was also home to the Buffalo Soldiers, African Americans who served in the segregated army between 1866 and 1941. Many soldiers stationed at Fort Huachuca today are involved in military intelligence.

The Fort Huachuca Historical Museum exhibits uniforms from various periods, early equipment and weapons. The nearby U.S. Army Intelligence Museum traces the evolution of military intelligence from the Revolutionary War to the present. U.S. citizens may obtain a visitor’s pass at the gate. Because this is an active military installation, a valid photo ID for all passengers 13 and older and vehicle registration and proof of insurance is required.

Signs along the half-mile trail to the top of Coronado Peak in Coronado National Memorial tell the story of the first major expedition into the American Southwest from 1540 to 1542 by Francisco Vasquez de Coronado.

South of Sierra Vista bordering Mexico, Coronado National Memorial commemorates the first major expedition into the American Southwest. In 1540, Francisco Vasquez de Coronado, accompanied by 339 Spanish soldiers and 1,100 Native Americans, explored what is now the southwestern United States looking for the mythical Seven Cities of Gold. Though he failed to find gold, he discovered several famous landmarks, including the Grand Canyon.

Today, a three-mile winding dirt road leads to the scenic overlook at Montezuma Pass, elevation 6,575 feet. We hiked the half-mile trail to the top of Coronado Peak and read the signs posted along the way that told the story of Coronado’s journey. From there, we had a panoramic view of Arizona, Mexico and the 18-foot-high fence that separates the two.

We devoted a full day to Bisbee, a small, artsy town known for its mining past. In its heyday, Bisbee’s mines produced more than 8 billion pounds of copper, 2.8 million ounces of gold and 77 million pounds of silver. The mines closed in 1975 after almost 100 years of continuous production. In 1976, tours began at the Queen Mine. Since then, more than 1 million visitors have donned yellow slickers, hard hats and miner’s lanterns to journey by train 1,500 feet into the mountain. Our guides, all former miners, made the tour special by relating their personal experiences from their years underground.

Since 1976, more than a million visitors have donned yellow slickers, hard hats and miner’s lanterns to journey by train 1,500 feet into the Queen Mine in Bisbee.

The Bisbee Mining and Historical Museum, an affiliate of the Smithsonian Institution, explains why Bisbee was once known as the Queen of Copper Camps. We also browsed the shops and art galleries on Main Street, had a beer in historic Brewery Gulch and ate a fine dinner at Cafe Roka.

When we left Palomitas, we headed toward Willcox. En route we stopped in Tombstone and found RV parking on the street. Tombstone was dubbed “The Town Too Tough to Die” in the early 20th century. With the wooden boardwalks on Allen Street, gunfighters in period costume and horses pulling stagecoaches around town, it doesn’t look like it’s changed much
either. It’s safer these days, since the Wyatt Earp and Doc Holliday look-alikes shoot blanks in the daily re-enactments of the gunfight at the O.K. Corral.

We visited the Tombstone Epitaph building, where the oldest continuously published newspaper in Arizona is still being printed. The first issue was printed in 1880 and covered the famous gunfight in 1881. Jim was so fascinated that he subscribed to the monthly Tombstone Epitaph National Edition.

The ruins of several building, including the cavalry barracks, are preserved at Fort Bowie National Historic Site.

In Willcox, we checked into an RV park. In our dinghy, we explored Chiricahua National Monument, Fort Bowie and the Amerind Museum. If you want to take your coach into the monument, the maximum length in the Bonita Canyon Campground is 29 feet and there are no hookups.

During out visit of Chiricahua National Monument, we were awed by the massive stone columns and balanced rocks, remnants of a huge volcanic eruption 27 million years ago. As we hiked through the fir and pine forest, a troop of coatimundi ran by us with their tails held high. Cardinals, quails and a variety of birds tweeted their unique calls. The scene was enchanting.

Fort Bowie, a National Historic Site, commemorates the bitter conflict between the Chiricahua Apaches and the U.S. military. From 1862 to 1894, Fort Bowie and Apache Pass were the center of military operations culminating in the surrender of Geronimo in 1886. After the fort was abandoned, many of the historic artifacts disappeared. But in 1960 Fort Bowie was declared a National Historic Landmark and since then, collectors or their descendants have returned many of the relics.

The visitor center is a 3-mile-round-trip hike from the parking lot. The easy hike passes by the ruins of an old mining shack, stagecoach station, cemetery and a replica of an Apache hut. The ruins of Fort Bowie come into view at the crest of the hill.

The Amerind Museum, 26 miles southwest of Willcox, houses a collection of Native American art and artifacts. It tells “the story of America’s first peoples from Alaska to South America and from the last Ice Age to the present.” The impressive collection includes baskets, pottery, jewelry, katsina dolls and a bow made and signed by Geronimo.

Cochise County is rich with history. I confess that history was not one of my favorite subjects in school, but now I find that trekking to the ruins of a military fort, traveling 1,500 feet into an abandoned mine and exploring a cave where bats have been hanging out for 45,000 years brings history alive.