Exploring 10 of the Best Waterfalls in the U.S. 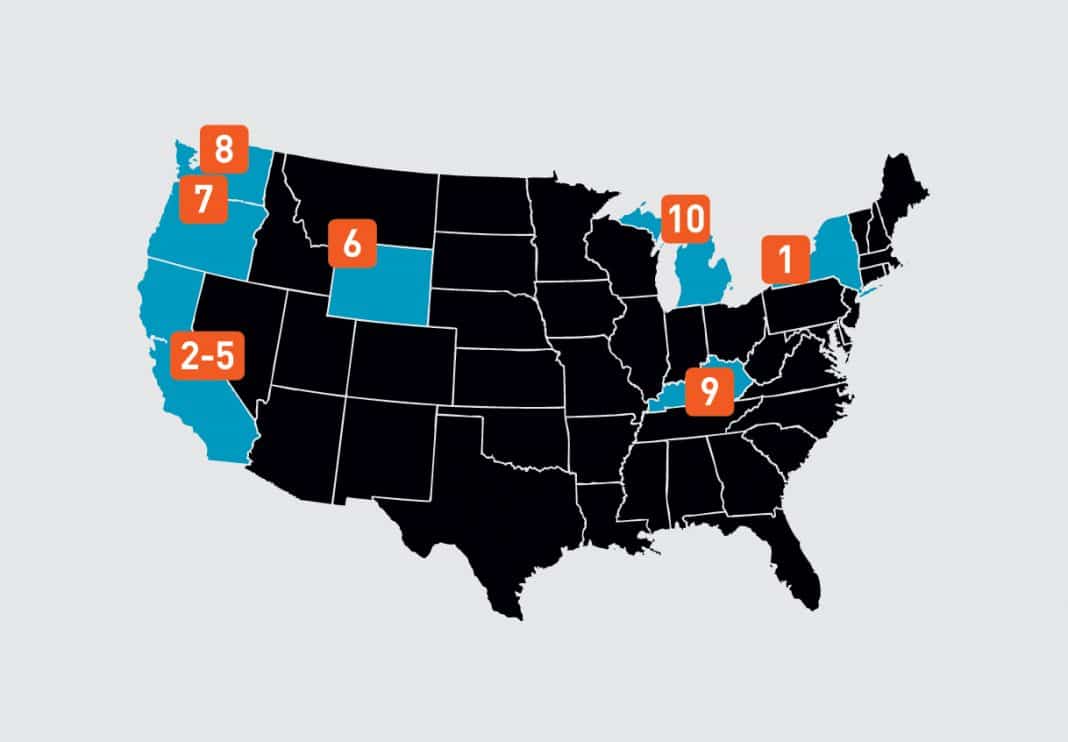 What makes a waterfall great? What makes for a “best” waterfall? There are probably as many different opinions of “great” and “best” as there are people to ask.

One thing is for sure — there is something special and alluring about waterfalls. They make great destinations for hikes and beautiful subjects for photography.

Going Down
The numbers here are for location only and are not rankings. Each waterfall is worth a visit in its own right, and choosing a favorite is far too subjective. 1) Niagara Falls 2) Yosemite Falls 3) Nevada Fall 4) Vernal Fall 5) Bridalveil Fall 6) Yellowstone Falls 7) Multnomah Falls 8) Snoqualmie Falls 9) Cumberland Falls 10) Tahquamenon Falls

First, let’s get one thing out of the way: My opinion is just that, my opinion. While I have visited many waterfalls in person and have seen hundreds of waterfalls on many web pages, I make no claim that mine is the definitive list of the 10 best waterfalls. America is truly “the Beautiful” when it comes to the natural world. It is filled with great waterfalls, regardless of the definition. I limited the 10 best waterfalls to the continental U.S., excluding Canada and Hawaii. Well, maybe one just on the border of Canada.

For the benefit of this article and to establish some means of determining my list of the 10 best waterfalls, I came up with a working definition. I believe the “best” waterfall should inspire the viewer, should not be seasonal (it should be relatively consistent year-round) and should be unique in some way. Several elements and variables went into the decision to choose one waterfall over another: height, width, power, location, surroundings, type, volume and season. Following, in no particular order, is my list of the 10 Best Waterfalls in the U.S.

Perhaps the most famous falls in North America, Niagara Falls is comprised of three falls: Horseshoe on the Canadian side, and American and Bridal Veil on the U.S. side.

The waterfall by which all others are rated and measured is Niagara Falls. Even though Niagara is located partly in Canada in addition to the U.S., it simply must make my list. Many waterfalls are billed as “Niagara of the (fill in the blank),” but there is only one Niagara Falls. There are words that describe why Niagara is the basis for comparison. Huge. Magnificent. Breathtaking. In every sense, Niagara has all the characteristics of what makes a “best” waterfall. 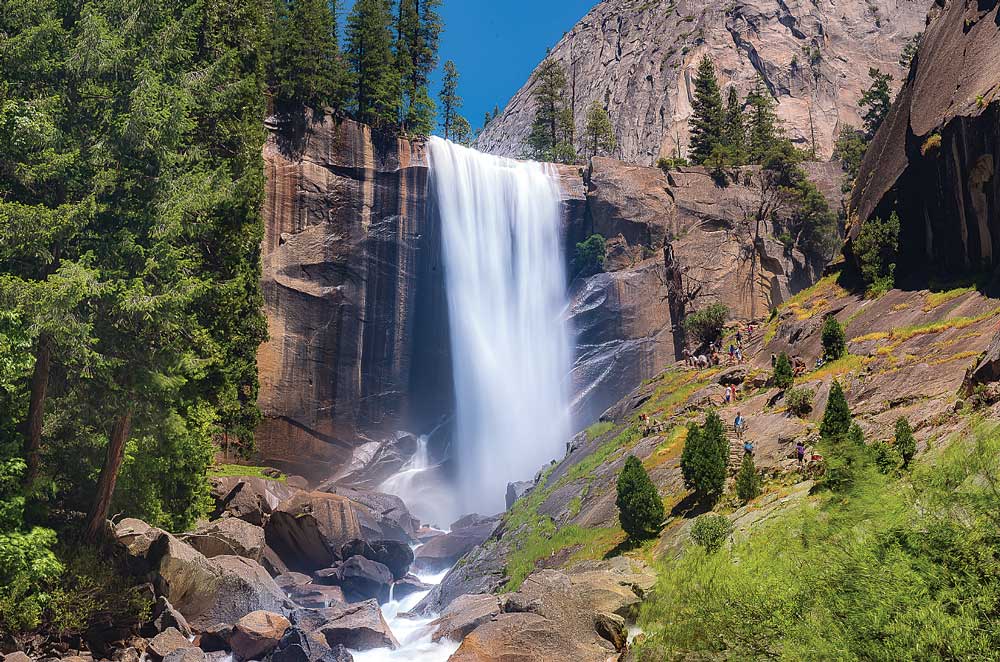 The Falls of Yosemite National Park

For the purpose of this list, I am combining the Upper Falls, the Middle Cascades and the Lower Falls of California’s Yosemite Falls into a single entry. Yosemite Falls has a combined height of 2,425 feet (Upper at 1,430 feet, Middle at 675 and Lower at 320 feet) and is set against the magnificent backdrop of Yosemite National Park. Although Yosemite Falls does not hold the same volume yearlong (most waterfalls don’t), it makes up for any lack of volume during the spring months, and also with its impressive height.

Three other Yosemite waterfalls make my “best” list. The Merced River contains a series of falls — Nevada, Vernal and Illilouette (the latter of which doesn’t quite make our list). Nevada Fall, at 594 feet, has a maximum width of 200 feet and flows year-round. Vernal Fall, whose name means “springtime,” has a maximum height of 317 feet. In order to see Nevada and Vernal falls, hikers must take the appropriately named Mist Trail.

Bridalveil Fall, a popular name among waterfalls, softly plunges 620 feet. This is the waterfall that travelers arriving from the south see first.

That first view of the valley from the Wawona Tunnel is one of the most famous in California. 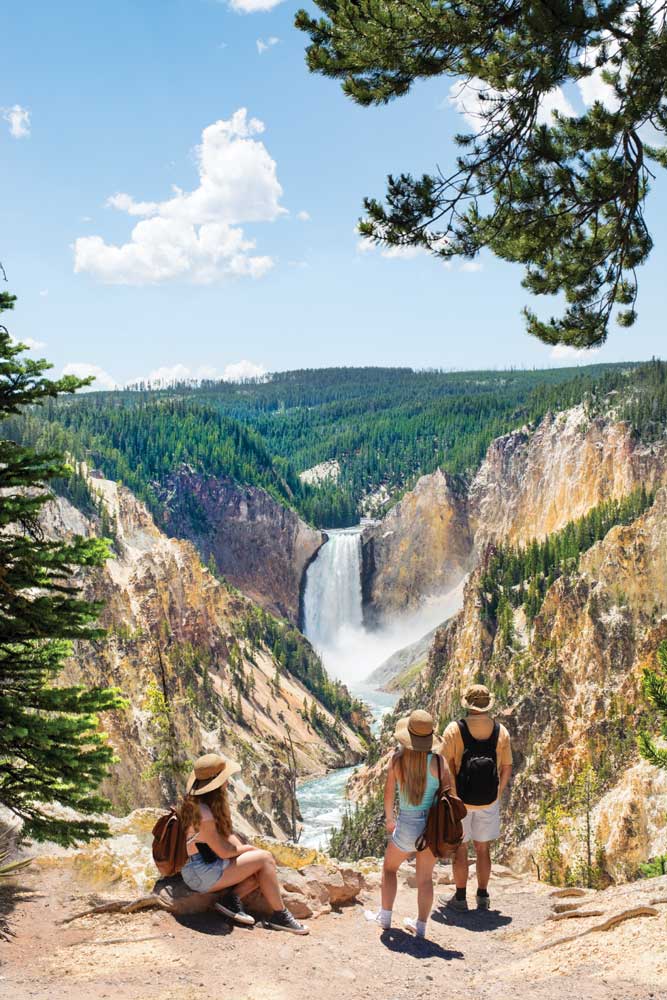 Yellowstone Falls consists of two separate falls, both of which are viewable from the roadside or after short hikes.

Wyoming’s Yellowstone National Park is home to Yellowstone Falls, which fall a total of 417 feet when combining the upper and lower portions. The Lower Falls (308 feet) is viewable from the roadside or by hiking a short distance. Uncle Tom’s Trail provides a unique, close-up view. The Upper Falls drops 109 feet and is also viewable from the roadside or from a 1⁄8-mile hike. Upper Falls is often overlooked because of its proximity to its greater downstream sibling. As a side note, sandwiched between Upper and Lower falls is another smaller waterfall — the graceful Crystal Falls.

Oregon’s Columbia Gorge is the home of the impressive column known as Multnomah Falls. From either side of the gorge, a visitor can view Multnomah Falls as it plunges 620 feet from high cliffs to the river below. The water actually spills down in two tiers; the first 542 feet, the second 68 feet. A pedestrian bridge crosses in front of the top of the lower level, so close that walkers get damp crossing it. Another vantage point is a little more distant and dry. 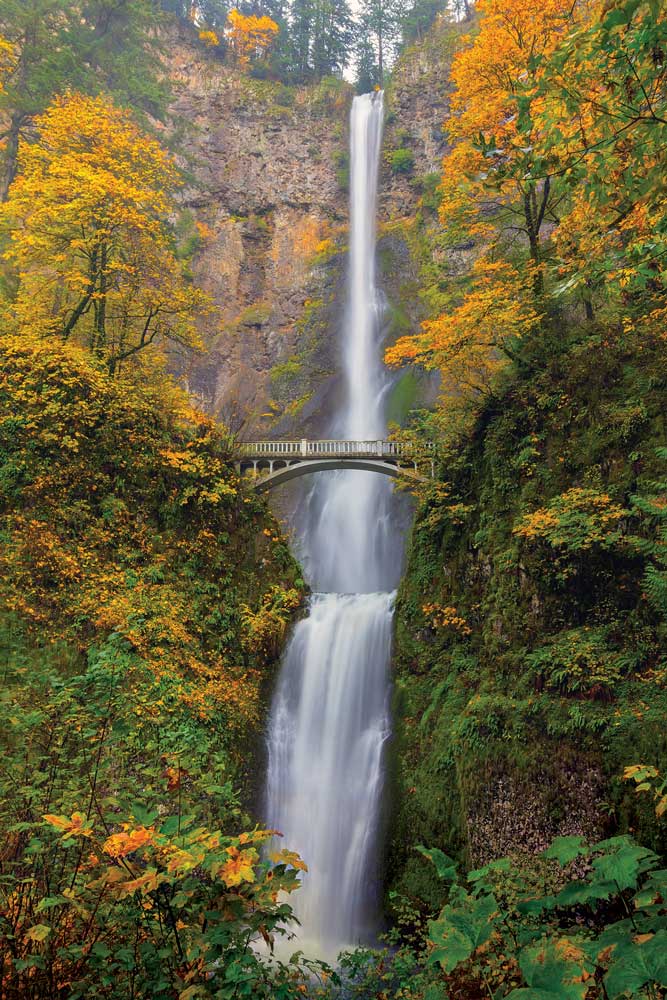 Located in Washington state 25 miles east of Seattle, Snoqualmie Falls plunges from the Snoqualmie River 268 feet into a 65-foot-deep pool. The volume does fluctuate throughout the year, but Snoqualmie Falls is one of Washington state’s most popular scenic attractions. When enjoying the falls from the adjoining park, visitors may not be aware of the power plant under the falls. It consists of two power houses, Plant 1 and Plant 2. Plant 1 was completed in 1899 and is underground. Even though Snoqualmie Falls is a developed area, the size and the history associated with its power plant make this falls notable.

To locate the last two “best” waterfalls one must cross the country from the waterfall-dominated West. Eastern waterfalls are different from their Western relatives mainly because of the contrast of terrains of the East and West. While the majority of my top 10 waterfalls are in the western region characterized by rugged and rocky mountains, only two, besides Niagara, are located in the east. 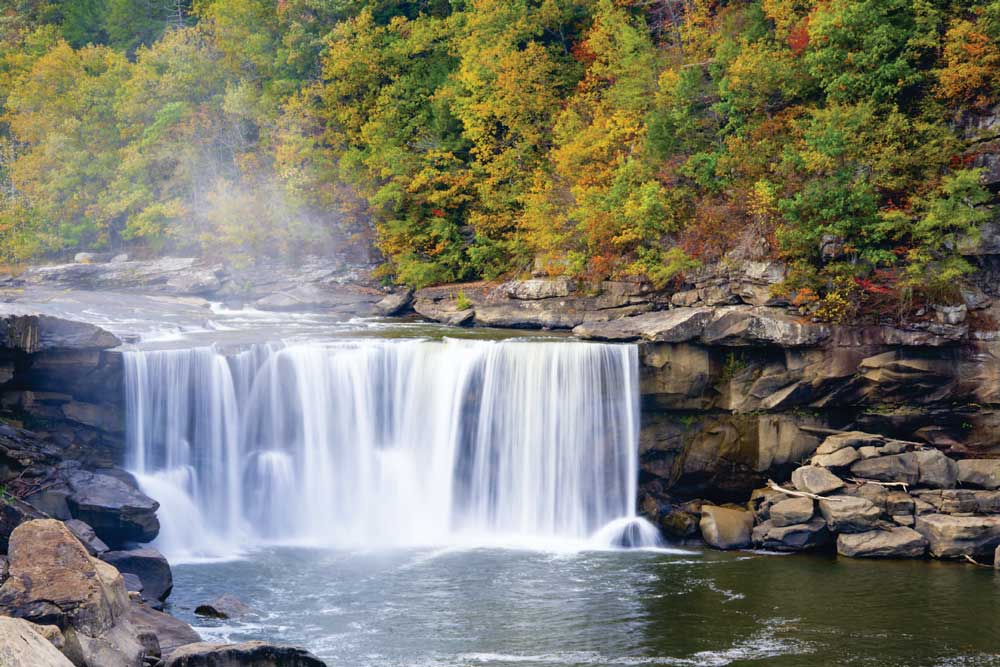 Dubbed the “Niagara of the South,” Kentucky’s Cumberland Falls has a special distinction that qualifies it for our list. Being 60 feet tall with a width of about 120 feet hardly qualifies it as a large waterfall, but it flows year-round and is rather impressive. However, what really makes Cumberland Falls distinctive is its moonbow. Cumberland is the only waterfall in the Western Hemisphere that regularly exhibits a moonbow on clear nights with a full moon. Other waterfalls have moonbows that appear on occasion, but not with the consistency of Cumberland Falls. Visit the Kentucky State park website for a schedule of moonbows.

Located on the Upper Peninsula of Michigan, Tahquamenon Falls State Park encompasses close to 50,000 acres, most of which is undeveloped woodland. Four miles downstream in the Tahquamenon River is the Lower Falls, which is a series of five smaller falls cascading around an island. Upper Falls is nearly 50 feet tall and 200 feet wide, with a maximum flow of more than 50,000 gallons of water per second. The water is notably brown in color due to the tannins from cedar swamps that drain into the river. 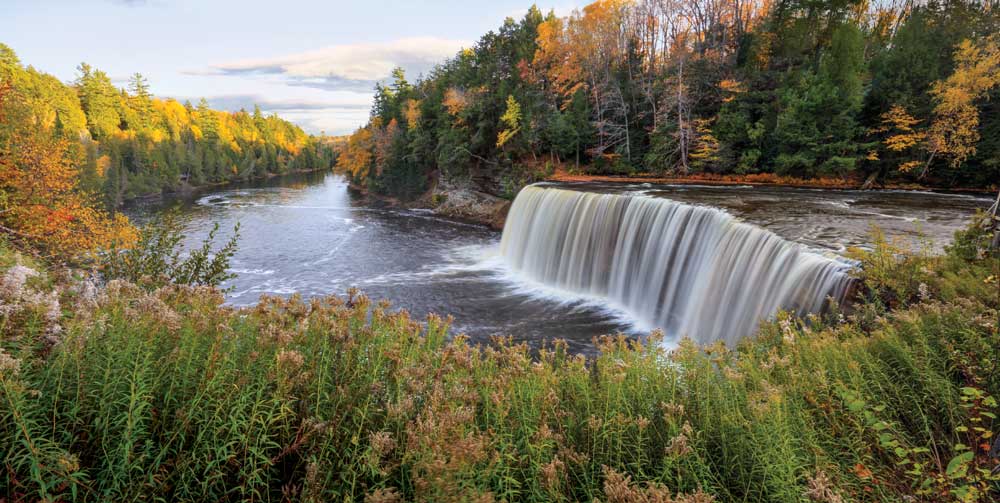 At nearly 50 feet tall and 200 feet wide, maximum flow on Upper Tahquamenon Falls has been recorded at more than 50,000 gallons of water per second.