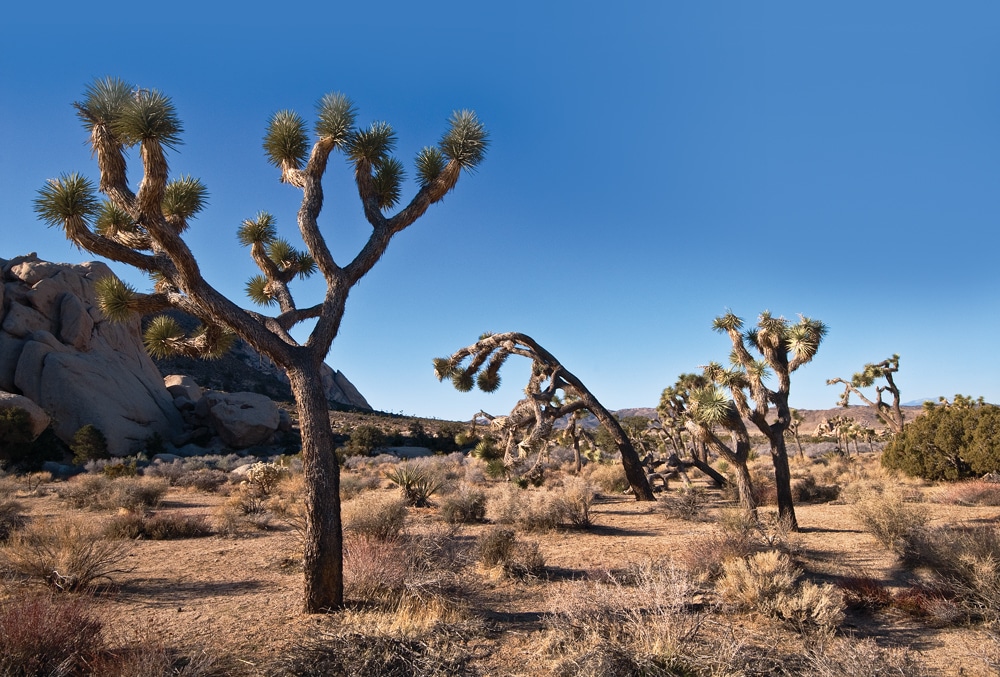 My mom used to despise the desert. She loves all shades of green haunts, and dreary, rainy skies. So it was a surprise when she agreed to take a drive with me through Southern California’s Joshua Tree National Park.

I had been boasting to her about Joshua Tree and all its beauty. I promised her the desert could be beautiful and I guaranteed she would think so, too.

Upon entering the park I started the tour right away. I told her Joshua Tree is a great place for visitors who want to get away from it all. “It’s also a terrific place for RVers like me,” I said with a smile, “and an awesome place for rock climbers and mountain bikers.”

Two deserts converge at Joshua Tree National Park. The Mojave and Colorado deserts join forces here to create a rich and varied land of plants and animals, especially in the transition zone.

The 794,000-acre preserve is about 140 miles east of downtown Los Angeles and 25 miles east of Indio, Calif. The elevation in the park stretches from a low of 536 feet to a high of 5,814 feet atop Quail Mountain. The park includes more than 585,000 acres of designated wilderness. There are hundreds of plant species here, along with 250 species of birds, 40 species of reptiles and 52 mammal species. One reptile, the desert tortoise, is threatened, while the purple-hued Coachella Valley milk-vetch, a plant, is endangered.

Joshua Tree first became a national monument in 1936 with a proclamation from President Franklin D. Roosevelt. In 1994, as part of the California Desert Protection Act, Congress designated the area a national park.

A desert side-blotched lizard suns itself.

Although there are several entrances to the park, I always enter via the south entrance, located off Interstate 10. The more popular entrance stations to the northwest, at the towns of Twentynine Palms and Joshua Tree, are reached via I-10 and Highway 62 (Twentynine Palms Highway).

The south entrance offers access to the plants and animals of the Colorado Desert. The eastern half of the park is drier and at a lower elevation than its counterpart, the Mojave Desert, which occupies the western half and contains ample stands of the park’s namesake, the dagger-leaved Joshua tree.

The Colorado Desert is below 3,000 feet in elevation and offers a bevy of local plant life including creosote bushes, ocotillo, palo verde and jumping cholla. Though it’s often called teddy bear cholla, don’t even think of giving it a hug or you’ll be poked with countless barbed spines. In the spring, look for red-orange blossoms of the chuparosa and the hummingbirds who feed from them, as well as kangaroo rats, kit foxes, zebra-tailed lizards, Le Conte’s thrashers and Western diamondback rattlesnakes.

The Mojave Desert, meanwhile, stands higher than 3,000 feet in elevation. Boulders grace much of the landscape with pinyon pines, Mojave yuccas, Mojave prickly pear cacti, scrub oaks and so much more. And of course, there are loads of Joshua trees, which aren’t actually trees but a species of yucca that can grow more than 40 feet tall.

Pollinated by the yucca moth, which in turn relies on the Joshua tree for food, full-grown Joshua trees provide nesting places for a number of birds such as the American kestrel, western scrub jay and ladder-backed woodpecker. Others, like the loggerhead shrike, impale its prey on the tree’s pointy leaves. On the ground, mammals such as the black-tailed jackrabbit and antelope ground squirrel scamper about, while reptiles include the Yucca night lizard.

As you travel north through the park, you’ll come to the Cottonwood Visitor Center and campground. The campground is open year-round and sites are available on a first come, first served basis. The facility has no hookups, but it does have water and a dump station.

Beyond the campground is Cottonwood Spring, a birdwatcher’s paradise.  Although the spring is natural, its surroundings were introduced when miners and homesteaders planted palms and cottonwoods in the early 1900s.

There are 191 miles of trails near the campground and throughout the park. If you want an impressive view, hike up Mastodon Peak. From the summit you’ll gaze down upon the Salton Sea and in the distance you’ll see the jagged peaks of the San Jacinto Mountains.

From Mastodon Peak, you can descend to the Lost Palms Oasis Trail, a path that leads past giant rock monoliths to a stand of native fan palms. Five native California fan palm oases dot the park, providing shelter, food and water for the local wildlife. In days of old, the oases were essential to travelers. Miners and cattlemen inhabited the area years ago, and pictographs prove earlier inhabitation by Native Americans. Evidence suggests the Pinto culture existed here sometime between 4,000 and 8,000 years ago.

As you proceed northwest, don’t miss the dense stretch of teddy bear cholla about 20 miles north of the Cottonwood area. Part of the Cholla Cactus Garden trail, this quarter-mile loop boasts many other types of cholla and plants that make it a self-guided treat.

At the White Tank Campground, about eight miles northwest of the cholla gardens, you’ll pass the transition zone between the Mojave and Colorado deserts. Now you’ll get your first glimpse of the unusual boulders of the region, and the Joshua tree.

According to legend, the Joshua tree received its name from Mormon pioneers. With branches stretching heavenward, the trees prompted the pioneers to liken them to the arms of Joshua pointing the way to the Promised Land. Look for their clusters of cream-colored flowers when they bloom from February through April.

Spend time at White Tanks and you’re bound to see rock climbers scaling the various upward routes. Countless boulders, arches, rock piles and a jumble of pink rock sculptures line the land. More than 80 million years ago, these rock piles lay hidden underground. Molten liquid oozed upward from the inner earth and cooled before reaching the surface, forming an igneous rock called quartz monzonite. A much wetter climate existed then, and groundwater penetrated the joints, with hard mineral grains eventually dividing the granite-like rock into blocks. Time passed and the soil around the rock washed away and violent flash floods exposed the spherical boulders seen today.

From White Tank Campground, travel northwest four miles to a junction where you’ll then head west for another 17 miles to the 5,195-foot viewpoint at Keys View. Although you can exit the park at this junction by turning right, that’s the last thing you’d want to do, for plenty remains to see and do. From this point, near the summit of the Little San Bernardino Mountains, you can gaze out across the vast Coachella Valley to the nearly 11,000-foot-high San Jacinto Range. To the south, the shimmering waters of the Salton Sea, 241 feet below sea level, are visible. And to the northwest, the San Jacinto Mountains touch the San Bernardino Mountains at San Gorgonio Pass.

For an even better view of Joshua Tree, hike up Ryan Mountain Trail, a wonderful path leading to the 5,461-foot summit. Stand on top of the peak and you’ll be in awe of your surroundings.

If you’re up for another hike, head to Lost Horse Mine Trail. It’s four miles round-trip or you can hike a 6.2-mile loop. At the mine, I found a friendly loggerhead shrike, as well as a nosy white-tailed
antelope squirrel.

Barker Dam is another popular hike. You can reach the dam, constructed by early day cattlemen, by hiking a 1.2-mile round-trip trail that provides entry into a world of petroglyphs, junipers, pinyons and turbinella oaks. The place is also considered an excellent bird-watching spot. From here, exit the park by driving 11 miles northwest of the west entrance at the town of Joshua Tree.

Joshua Tree National Park has provided endless enjoyment to me during visits for hiking, camping and climbing, and other visitors will no doubt find their own reasons to love this park.

A seven-day permit costs $15, and an annual pass costs $30. The Interagency Annual Pass is $80 per year and allows entry into all federal areas, including national parks and national wildlife refuges. Adults 62 and older may obtain an Interagency Senior Pass for $10, which allows lifetime free access to all national parks and monuments and a 50 percent reduction in campground fees at some locations. Individuals with disabilities receive the same benefits with an Interagency Access Pass, which is free of charge.