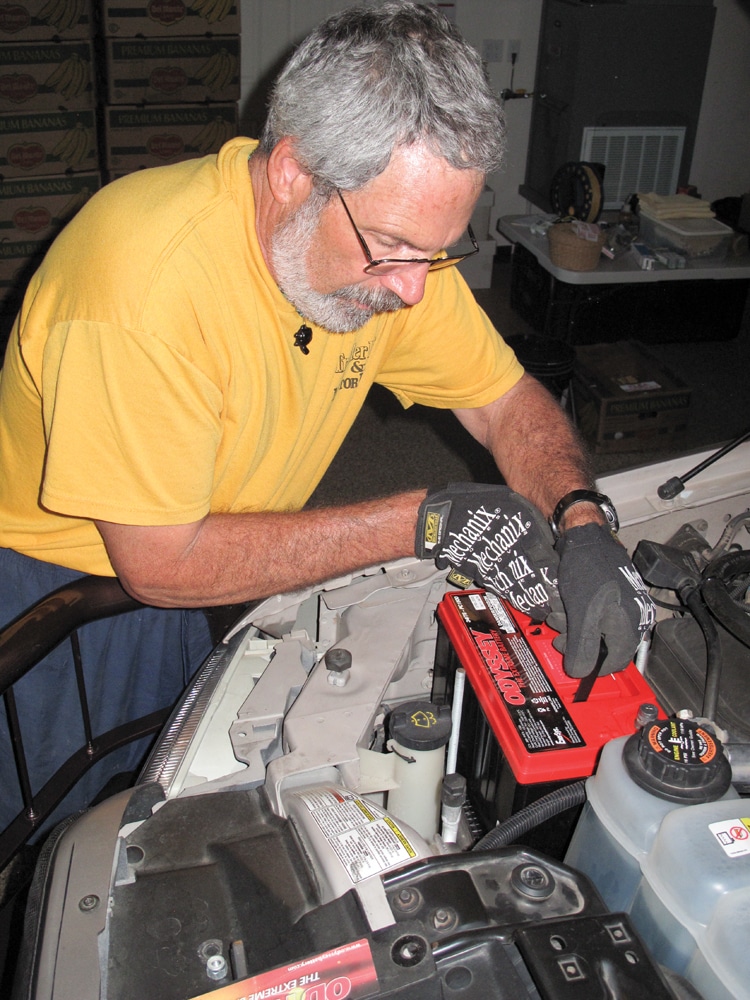 Have you ever had that sinking feeling when you turn the key, and nothing happens, that it could be the starter? Or it could be the batteries, especially if you have a newer diesel with common rail direct injection and glow plugs. When the “Wait to Start” light comes on, those little glow plugs that preheat the chambers above the pistons in Power Stroke and Duramax engines are, in essence, a dead short, sucking any surface charge off your batteries if they are already low. Now those same batteries need enough power reserve to spin the engine fast enough for the oil pump to produce around 22,000 psi to open the injectors.

That’s asking a lot of a little starter on a cold morning, or a pair of batteries that are not fully charged, possibly because the alternator is getting tired. And then again, the whole problem could be just a bad or corroded ground wire. Gas burners start a little easier, but their electrical system is just as important. So what do you do? Fortify that electrical system while you still can.

We had Ken Imler Diesel Performance inspect the electrical system on our 1999 Ford Super Duty in preparation for a lengthy expedition. We are about to take on a trans-Eurasian odyssey, driving from Lisbon, Portugal, to Shanghai, China, through 26 countries and following the legendary Silk Road, an adventure we expect will take at least three years. We could not afford to take risks with any part of that critical system. And while your tow vehicle may never see such rugged and torturous miles, it can nonetheless benefit from these very same upgrades.

All battery cable connections were checked and cleaned.

Odyssey batteries use absorbed glass mat (AGM) technology to offer, in one package, the advantages of both a high-powered starting battery and a deep-cycle battery, good for up to 400 cycles at 80 percent depth of discharge. That’s sort of like a sprinter and a long-distance runner in one. Odyssey plates are made of pure virgin lead (unlike the lead alloy in most batteries) so they can pack in more plates, which means more plate surface area and much more power. They deliver twice the overall power of conventional batteries with a lifespan of eight to 12 years. We installed two fresh Group 34/78-PC1500 Odyssey Extreme batteries.

Newer alternators like ours run cooler because they actually have fans on both the front and back of the case.

While we may think of our trucks as only mechanical devices, they also have many different electronic parts that resemble a personal computer more than a vehicle. All these little computers draw power as they remember your personal seat and outside mirror positions and your favorite radio stations. Most trucks built from the early 1990s contain a small component called a powertrain control module (PCM) that electronically controls parts and runs diagnostic tests. It only makes sense to have the best batteries you can afford, especially if you plan on keeping your RV. There are many sizes of batteries, each with its own power rating and configuration. For example, Odyssey makes at least 18 models, some with side posts and others with the more common top posts. Some models have both.

When you are installing dual batteries like most diesel trucks require, it’s always important to use two of the same type and size. We also checked all cables and auxiliary wires leading to accessories like our winch and driving lights, making sure that ground wires were clean and tight.

S&N Auto Electric recommended we add a ground from the back of the case to the block.

No matter how great your batteries, they are useless if they are not being properly charged and regulated. Our truck was ordered with the dual alternator ambulance package. The primary alternator charges the starting batteries, and the auxiliary unit feeds four Odyssey Group 34 batteries in the camper. In case youu’re wondering why we use the same size batteries in the engine compartment as those in the camper, it allows us to replace a starting battery under the hood should one fail. Also, the Group 34 is fairly common all over the world, including your local auto parts store.

Imler Diesel removed our alternators and we took them over to S&N Auto Electric in Sacramento, Calif., where its expert technicians completely reconditioned them. After cleaning and sandblasting the cases, all critical parts were replaced. These included heavy-duty rectifiers and diodes, heavy-duty (NTN) bearings, new heavy-duty brush holders, brushes and regulator, and a high-output stator on our auxiliary unit that charges the camper battery bank through an external Balmar regulator.

The auxiliary alternator feeds 200 amps through an external Balmar regulator to the bank of Odysseys.

Sammy Rai, owner of S&N Auto Electric, explained that newer alternators like ours run cooler than earlier models because they have internal fans on the front and rear of the rotor assembly. He also cautioned that often alternators are just grounded to the mounting bracket. Sometimes corrosion can build up between the front and back of the case so it is very important to have a good ground strap from the back of the case to the engine block. He emphasized that a solid clean ground is as important as a clean battery connection. This can significantly extend the alternator’s life.

The alternators were spun up on a computerized test machine to check for operating voltage, output and amperage at various speeds simulating on-road functions including alternator turn-on speed, voltage saturation point, dash-light function, load response control, soft start function, and input/output signal response at performance curve outputs from 1,000 to 6,000 rpm. Read-outs showed 160 amps going to the starting batteries, and 200 amps from our auxiliary alternator feeding the house bank of Odysseys.

Our external Balmar regulator monitors amps, voltage and temperature of the alternator and the bank of Odyssey batteries.

Back at Imler’s facilities, the new, maybe better than new, alternators were reinstalled. Following Rai’s advice, flexible Quick Cable welding wire and solid copper lugs were used for grounds from the rear of the alternator cases to the block.

Of course, something has to spin the alternators. A new Gates Green Stripe FleetRunner Micro-V belt is expected to last at least 100,000 miles under severe conditions. A new Gates belt tensioner and Gates idler pulleys replaced our truck’s factory units. Gates is one of the largest manufactures of belts and related parts in the world and offers products for a wide range of light truck applications.

The lower mounting bracket for our auxiliary alternator is part of the ambulance package.

Returning to where we began, nothing works until the engine starts.

Motorcar Parts of America offers its Xtreme X17802N 4.0KW starter with an offset gear reduction design as a replacement for that rather puny factory unit. Installation was straightforward for the experienced technicians at Ken Imler’s Diesel Performance. The mating face on the bell housing was buffed clean and a small, unneeded tab on the OEM power cable was removed. Permatex Maximum Strength Thread Locker was used on all bolts and studs.

The Xtreme X17802N 4.0KW starter with its offset gear reduction design is significantly bigger than the OEM Mitsubishi unit.

Permatex Maximum Strength Thread Locker was used on all bolts and studs.

The sheer size of the Xtreme starter’s offset gear reduction design is impressive, but the real test came when we turned the key. The powerful starter spun the engine like a top. The Xtreme X17802N was designed specifically for the Ford 7.3 Power Stroke engine.

Motorcar Parts of America makes starters and alternators for most vehicles sold in the United States. Not all trucks require the Xtreme model.

The new Xtreme HD starter was a tight but perfect fit.

Finally, given the number of computers and other hidden electrical draws on modern trucks and RVs, whenever we need to leave our vehicle for more than a couple of weeks, we hook up a VDC BatteryMINDer, (Model 2012-AGM). BatteryMINDers are the new generation of SMART pulse chargers that safely charge and maintain types and sizes of batteries including starter, deep-cycle and sealed types. They do all of this without overcharging, no matter how long they are left on. The Model 2012-AGM is precision set for all sizes and brands of 12V AGM lead-acid batteries, including but not limited to AGM Batteries by: Optima, Odyssey, Lifeline, Deka, MK, Universal Power and Trojan. The Model 2012 is for flooded and gel batteries.

A VDC BatteryMINDer keeps our Odysseys fully charged when the truck is off the road.

As we follow The Silk Road, we will climb over icy tracks though high mountain passes in the Pamir Mountains. Since Victorian times the Pamirs have been known as the “Roof of the World.” This 16,000-foot-high corridor is the ancient route between Afghanistan and China and no place to have electrical problems. You may not be driving around the world tomorrow, but that doesn’t lessen the importance of having a top-notch electrical system.