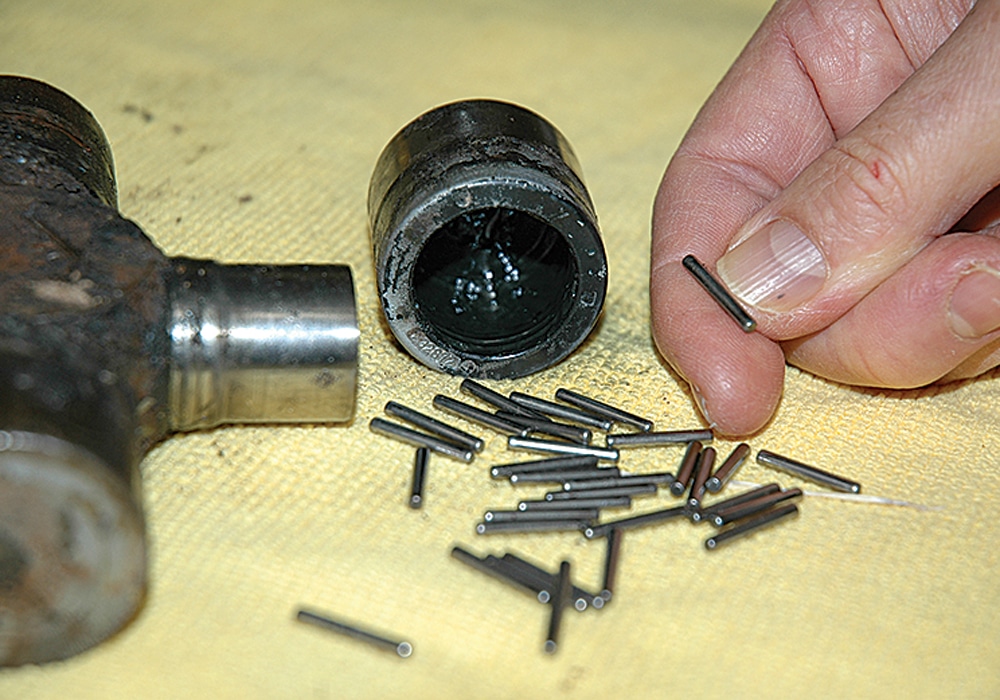 Proper Maintenance, Long Before Components Are Worn Out, Will Keep the Wheels Turning

It seems like everything is getting bigger these days. Trailers and fifth-wheels are longer and have more slideouts. Pickup campers and Class C motorhomes are heavier. Engines are more powerful. But there is one critical part of the drivetrain, gas or diesel, which has not changed much for decades. It’s amazing that all that weight being pulled and carried by all that power is essentially being transferred to the wheels by the driveshaft, U-joints and a spoonful of bearings, any one of which you could slip under your fingernail.

1) These little needle bearings are what connect your vehicle’s engine to the tires on the ground.

At the start of any travel season, or when plans call for racking up many miles of pre-planned journeys, one of the most important maintenance items that should not be neglected is a full inspection of the complete driveshaft system, in our case on a Ford F-550 4×4, but the procedure would be essentially the same for any make or model of truck, SUV or van.
In case you haven’t crawled under your tow vehicle lately, whether it’s two- or four-wheel-drive, the driveline system is a fairly complicated piece of engineering that incorporates U-joints, slip joints and, usually, a carrier bearing, and if it’s a four-wheel-drive, a constant velocity or CV joint, all running on a thin layer of grease. All of these components work seamlessly together to provide the smooth transfer of power

2) Time and miles had taken their toll on the stub shaft splines.

from the transmission and/or transfer case to differentials that in turn rotate the axles and wheels. As with all mechanical components, they’re subject to wear, but since you can’t see them, often the first sign of that wear is vibration. That vibration is often blamed on tires being out of balance. That same vibration can create transmission and differential problems if not corrected. It can also leave you wondering what the problem is after the tires are professionally balanced for the second time. If a U-joint or CV joint fails, you will know it right away because you’ll be on the side of the road.
We visited Ken Imler Diesel Per­formance in Sacramento, California, where its reputation for doing things right the first

3) The blue glide coat on the new Spicer shafts extended farther up the splines for reduced wear.

time keeps customers coming back. One of the technicians quickly removed the front and rear driveshafts and sent them over to Drive Line Service of Sacramento. Periodically, and especially before a long adventure, we always take the driveshafts to Drive Line Service where the technicians meticulously inspect, rebuild and balance everything with quality Spicer components. A high-speed, precision Axiline balancing machine developed by Drive Line Service is used to precisely align and balance all components. More than 100 shops around the country use the company’s patented system.
Starting at the front, the splines on the stub shaft that slide into the slip yoke coming from the front differential were inspected. The inspection showed significant play in the splines because

the blue glide coating had worn off. A similar wear problem was found on the midship stub that mates with the rear driveshaft. The worn stub shafts were removed with a lathe and new ones pressed in, carefully aligned and welded in place. Holding a tolerance of 0.003 of an inch was the goal; ours was held to 0.001. It was apparent that the glide coat on the new Spicer shafts extended farther up the splines for reduced wear.
Moving to the other end of the front driveshaft, (four-wheel-drive vehicles), attention was directed at the CV joint, a critical, but often neglected, component whose job is to allow a driveshaft to transmit power through a variable angle, at a constant rotational speed, without an appreciable increase in

5) Once the stub shaft was precisely aligned in the driveshaft, it was welded in place and rechecked. The goal was to keep a tolerance of .003 of an inch. We got ours down to .001.

friction or play. After disassembly, there were signs that it had over oscillated on a really bad bump or dip. A CV kit was installed, replacing everything but the CV ball and the H-yoke. It was important to make sure that all the needle bearings were correctly in place before putting the caps back on and hand turning it to make sure everything was rotating smoothly. The reason this important joint is often overlooked is because it’s sometimes hidden above a skid plate. It does have a lube fitting that must be reached with a needle attachment on a lube gun. Lube guys in maintenance shops often don’t want to hassle with it.
Removing the U-joints, we looked for uneven surface wear called “end galling” or “brinelling.” Brinelling is a process of wear in which similar marks are pressed into the surface of a moving part, such as bearings. The very small indentations

6) As with other driveline components, rebuilding a CV joint is a job for an experienced technician.

can quickly lead to improper operation, like chattering or excess vibration, which in turn can accelerate other forms of wear, such as spalling and galling. In the case of U-joints, brinell marks will often be in evenly spaced patterns along the races — rows of indented lines caused by the needle bearings digging into the surface of the caps.
To be safe, all the U-joints were replaced with new Spicer sealed units. Upon questioning the tech, realizing that older U-joints required lubrication at specified intervals, we were informed that the trend is moving toward a “greaseless society.” New technologies in seals have promoted this along with the demand from the OEMs to provide more maintenance-free or extended-life products. The result is a

7) Inside the ball of the CV joint, the small needle bearings must be perfectly in place before reassembling.

stronger U-joint because it has not been compromised by cross drilling for the Zerk (lube) fitting. These new generation sealed joints are said to typically go 100,000 or 200,000 miles without a problem, even with diesel engines that develop higher torque.
Two of the yokes on the rear shaft were showing some wear so those were also removed and replaced using a process similar to that which was used on the stub shafts. In a driveshaft assembly, a cylindrical cardboard insert is often placed within a tubular shaft to dampen the noise generated during use. In many instances, the outer surface of the cardboard insert is provided with a solid bead of an elastomeric material that extends helically along the length of

the tube. The solid helical bead is provided to engage the inner surface of the tube with an elastically developed force to prevent the damper insert from moving relative to the tube in service. As the tube transmits power, it can experience changes in its shape because of torsional and flexural loads. It has been found that engagement of the solid helical bead with the inner surface of the tube causes the insert to change its shape inside the driveshaft. As a result of this change of shape, the resonant frequency of the cardboard insert changes also, resulting in an undesirable reduction in its ability to dampen noise and vibration. It also sometimes makes proper balancing more difficult. Consequently, the cardboard

9) To properly lube the CV joint, a needle attachment on the lube gun is required.

inserts placed by the factory were removed.
Installing all new U-joints looked very simple when done by an experienced technician. The new Spicer joints looked impressively bigger and stronger than the ones being replaced. Before final assembly, the flanges that bolt to the transfer case and the differentials were cleaned up for a smooth, tight fit and the “eyes” of the U-joint yokes were deburred. High-grade Spicer grease was used to prelube the slip tubes.
A new center support carrier bearing was pressed onto the splined stub shaft on the rear of the midship driveshaft making it ready to install on a cross member of the truck’s frame. The

10, 11) The carrier bearing supports the midship driveshaft where it joins the rear driveshaft with its splined stub shaft. It is bolted to a frame cross member.

rubber dust boot was also in need of replacement.
Moving to the Axiline balancing machine, front, midship and rear shafts were balanced. The machine spins the shafts on a special mount that duplicates their function when in a vehicle at different speeds. It measures small vibrations and runout. Little flat washer-size weights are temporarily placed and moved accordingly and later welded on to obtain the perfect balance.
The final step was to bring the painted and assembled driveshafts back to Ken Imler Diesel Performance where everything was bolted in place. It’s possible to do this yourself, but use caution before you start. Several uncommon wrenches and sockets may be required depending on the vehicle. Often, the work is best done by experienced professionals.

10, 11) The carrier bearing supports the midship driveshaft where it joins the rear driveshaft with its splined stub shaft. It is bolted to a frame cross member.

In an emergency, with a few simple tools, a failed U-joint can be replaced on the side of the road. It’s not fun, but if one fails anywhere close to nowhere, you have three choices: walk, call for a tow or fix it. (On some 4x4s, if a rear U-joint fails, the rear driveshaft can be removed and the vehicle can be driven in front-wheel-drive only to a place where repairs can be made.)
A good drivetrain maintenance regimen at the prescribed service intervals and/or before a major trip can prevent unexpected failure that can truly leave you stranded.

12) A new dust boot protects the midship driveshaft splines where it mates with the rear driveshaft.

13) After pressing the new yokes into the shafts, the seam is welded and then rechecked for trueness.

14) Any slight out-of-trueness is corrected with a quick blast from a torch.

15) Setting up the high-speed precision Axiline balancing machine developed by Drive Line Service of Sacramento is initially done with the experienced hand of the technician. He can feel the slightest vibration.

16) Small, flat washer-size weights are temporarily placed and moved to obtain the perfect balance. They are then welded into place.

17) Some of the special sockets and wrenches needed to remove or install driveshafts may not be in most toolboxes. Check before you start.

18) The simple U-joint could be the weak link in today’s powerful drivetrains. Have you checked yours?

19, 20) The expert mechanics at Ken Imler Diesel Performance installed the overhauled driveshafts and kept an eye out for any other problems.

19, 20) The expert mechanics at Ken Imler Diesel Performance installed the overhauled driveshafts and kept an eye out for any other problems.