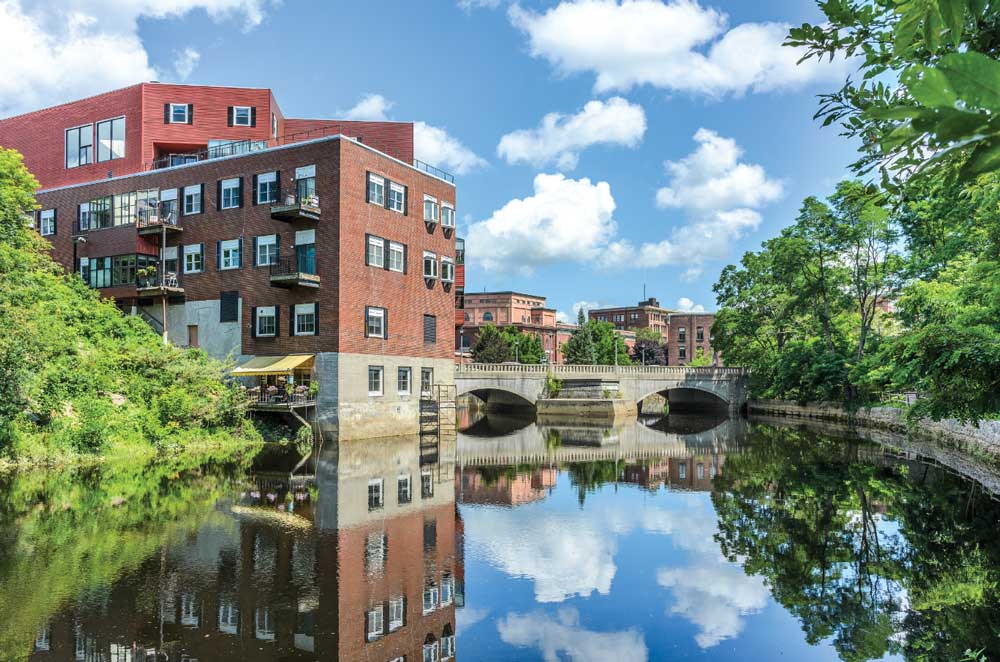 Down East Maine is as far east as it gets on the U.S. mainland, although it is certainly not down. For sailors, however, a voyage to Maine’s northern coast is downwind in an easterly direction from Boston, and the nautical name given to the area by old salts long ago has stuck. Recently, my husband, Mark, and I traveled to Down East Maine with our 36-foot HitchHiker, and we were bewitched by the many delights we found well off the beaten path.

The city of Bangor is the gateway to the region, and friends showed us some of the city’s more unusual sights. Often overshadowed by Portland, its flashier neighbor to the south, Bangor is a working town, and its prettiest side may be its backside.

The Kenduskeag Stream Trail reveals beautiful reflections on the backside of Bangor.

The Kenduskeag Stream Trail meanders behind the tall brick buildings downtown and created colorful reflections during our walk one afternoon. As we ambled along the tree-shaded path, we were surprised when the trail suddenly shifted gears near the rural outskirts of town. In just a few strides, we passed from urban cityscape to pastoral landscape.

Retracing our steps back to town, we worked up enough of a thirst to warrant a stop at the Sea Dog Brewing Company. Quaffing Gollywobbler brown ale on the enormous deck out back, we had a great view of the boats on the tidal Penobscot River that runs along the edge of the city.

Best-selling author Stephen King has been a longtime resident of Bangor, and on a drive-by past his gracious Victorian home, we admired the tall wrought-iron fence surrounding his property. Decorated with bats, gargoyles, and demons of all kinds, it seemed ideally suited to a master storyteller who has raised the hair on the back of our necks for decades.

Nearby, at the University of Maine, we took a stroll along the Orono Bog Boardwalk. This long wooden walkway traverses a wide expanse of peat bogs created by receding glaciers 10,000 years ago. Deer, colorful birds, and other animals live in this 616-acre nature preserve, and we were delighted to see a spotted fawn in the distance and a black-throated green warbler up close.

This part of Maine is made up of dozens of peninsulas, islands, and saltwater rivers. Near the village of Bucksport, downstream from Bangor, the bridge across the Penobscot River is not only a popular landmark but has been an example of the latest suspension-bridge technology twice in its 85-year history. Replacing the old ferry system, the innovative Waldo-Hancock Bridge opened with fanfare in 1931. In 2006 the original span was retired when the radically different cable-stayed Penobscot Narrows Bridge took its place.

Savvy engineers built the Penobscot Narrows Bridge to incorporate the tallest public bridge observatory in the world. The lookout is at the top of one of the two 420-foot bridge towers, and a quick elevator ride took us up to it. Peering through the glass walls at the 360-degree view surrounding us, we could see for miles up and down the Penobscot River, and the pretty village of Bucksport seemed to lie right at our feet. 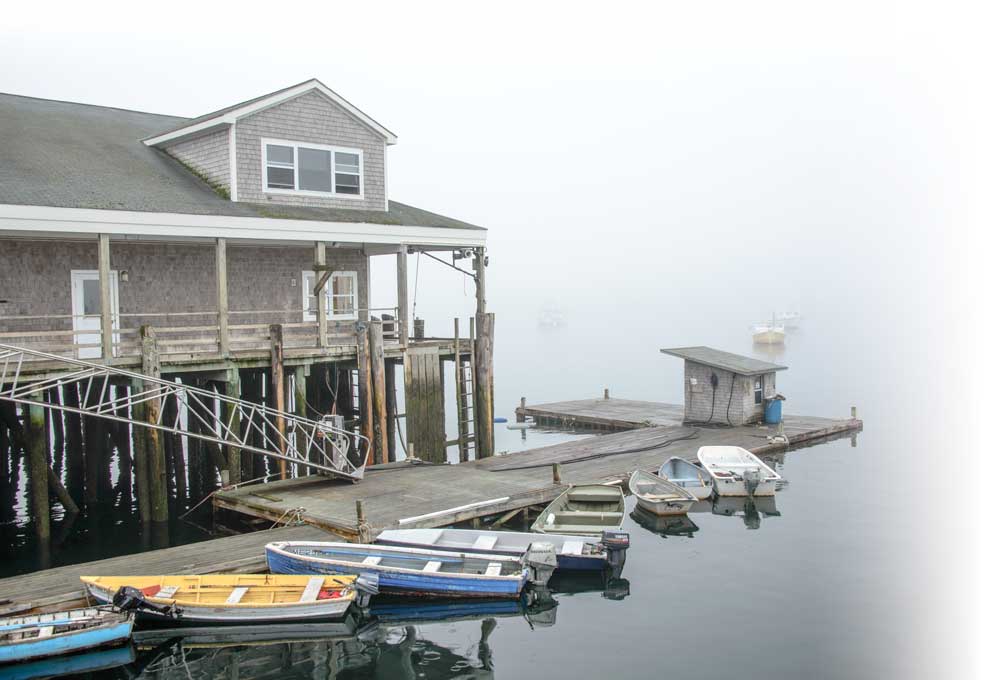 Although tidal rivers make up much of the northern Maine coast, getting out onto the open ocean is a must for visitors to the area. Among the boating, options are windjammer day sails, dinner cruises, and whale-watching tours. After a bit of research, we decided to visit the Cranberry Islands on the mail-boat ferry.

The Double B runs year-round between Northeast Harbor on Mount Desert Island, home to Acadia National Park, and Great Cranberry and Little Cranberry islands. Our day aboard the boat and ashore on the islands turned out to be one of the highlights of our visit. A round-trip ticket is good for unlimited ferry rides all day between the three ports.

We climbed aboard for the first trip of the morning, and the first mate, Ted, welcomed us and about 20 or so regulars. The mail boat is a lifeline for the 200 or so inhabitants of the two Cranberry Islands. Along with the mail, it carries most of the goods that supply the islands’ tiny stores and restaurants and also ferries the islanders themselves.

As the boat threaded its way through Northeast Harbor, we noticed that not only were we the only tourists on board, but we were surrounded by workmen carrying lunch pails. At our first stop, Great Cranberry Island, 10 minutes later, the commuters got off and climbed the gangway for a day of work.

No sooner had they gone ashore than a group of schoolchildren came down the gangway and joined us on the ferry. Like most other American kids on their way to school, they all carried backpacks, but unlike other students, they were also wearing life jackets.

“We’ve got the cell phone numbers for every single parent,” Ted told me, as he patted the backs of the kids coming aboard. Other passengers greeted them with hugs and welcomed them warmly, and we realized that many of the adults on board were schoolteachers.
We were enchanted by this unusual aspect of island life and listened with rapt attention as Ted described what it’s like aboard the Double B in wintertime when the ocean spray freezes hard on the windshield and the more fearsome blizzards stop the ferry from running altogether. He went on to say that winters are so cold in this part of Maine, that the politicians keep their hands in their own pockets.

A few minutes later, we disembarked in Islesford on Little Cranberry Island, along with an endless stream of packages, bags of potting soil, coolers full of meat and dairy products, and other goods destined for the stores, restaurants, and homes on the island.

“We live and die by Amazon,” one islander joked, as we watched Ted and the captain unload the boat into a waiting pickup truck.

We walked along a small road past a street sign that showed a huge mosquito carrying off an islander. We laughed, but we were grateful that the mosquitoes weren’t out yet. However, the wild lupines were in full bloom, and it seemed that every empty field and yard was filled to overflowing with these enormous and gorgeous blue and lavender flowers.

A small sign by the road led us to Islesford Artists, an art gallery owned by Katy Morse Fernald, a third-generation islander. Her husband, a sixth-generation lobsterman, used to store and repair his lobster pots in the building’s loft, which is now filled with beautiful paintings.

We returned to the docks to catch the mail boat back to Great Cranberry Island, where we found a small general store and the popular lunch spot Hitty’s Café. But it was the ferry rides that captivated us. Before long, we were back down at the docks waiting to board once again. Along with goods being loaded on and off the mail boat, a pair of French Canadians disembarked with their touring bicycles.

After we hopped on, the mail boat made a quick stop at Islesford, and a group of people started loading bongo drums onto the boat. Before long, the bongos were stacked high in front of us, and a beaming young man, Beau Lisy, came aboard. He told us he was the once-a-week music teacher at Islesford School and had just finished a segment on West African music. 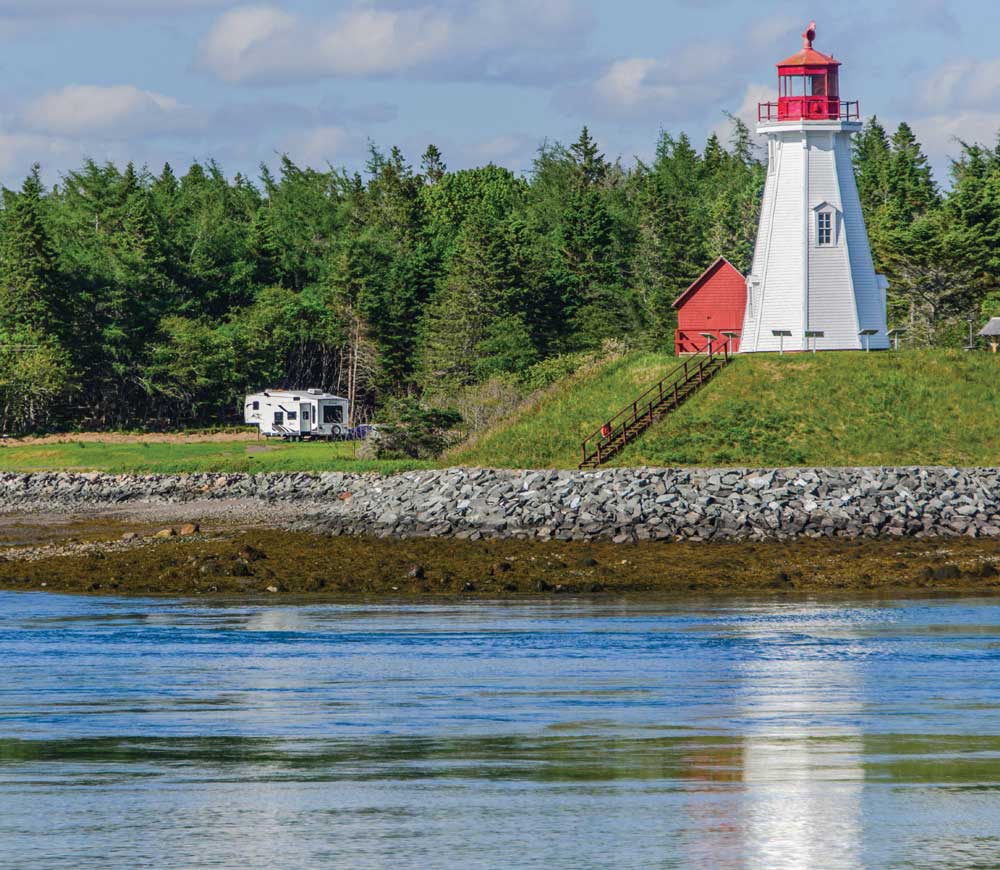 A fifth-wheel trailer parks near a lighthouse on New Brunswick’s Campobello Island, the second largest of the Fundy Islands.

We couldn’t imagine topping our mail-boat experience, but Down East Maine is full of surprises. After a scenic drive along coastal Route 1 east from Mount Desert Island, we discovered the charming seaside village of Lubec, the easternmost municipality on the U.S. mainland, and Campobello Island, just across the border in New Brunswick.

The border crossing, although formal and requiring a passport book or passport card, is a simple trip from Lubec across a small bridge. What a delight to drive onto the island and instantly see a sign with the French translation “Arrêt” underneath the English “Stop.”
Both sides of the international border are marked with a stunning lighthouse. Candy-striped West Quoddy Head Light stands on the U.S. side, while its sister, the red-cross-emblazoned East Quoddy Head Lighthouse, known locally as Head Harbour Light­house, presides over the Canadian side.

While West Quoddy Head Light is easy to see up close because it is in a state park, East Quoddy Head Lighthouse stands on a rocky knoll at the far end of Campobello Island and
is accessible by foot for just a few hours at low tide. The tides in this region are enormous, and the water rises 5 feet an hour, so intrepid trekkers who venture out to the lighthouse have to pay close attention to the tide tables or risk being stranded on the island for eight hours until the next low tide.

Since we arrived near high tide, we contented ourselves with admiring this stunning lighthouse from a distance. Lobster boats puttered around the rocky shores, and the ocean was so clear we could see the sand and pebbles deep in its depths beneath the seaweed that waved in the swell.

Back on the U.S. side of the border, we ventured to another seaside village, Eastport, where we found the antique wooden Friendship sloop tied up at the town dock. Behind the boat was a row of gray clapboard buildings facing the ocean. To complete this quintessential New England scene, a towering sculpture of a fisherman greeted visitors at the pier. This sculpture was created as a prop for the TV show Murder in Small Town X, and the residents liked it so much they made sure it stayed on the dock long after the TV crews left town.

We were charmed by the small, distinctive homes as we wandered through the streets. Many are oddly shaped, built according to the whims of the lobstermen and fishermen who settled the town long ago. Tall, skinny two-story houses and rows of homes with steeply pitched roofs were lovingly maintained and encircled by beds of colorful flowers.

One morning we enjoyed a delicious breakfast at the Moose Island Bakery, and one evening we caught a free lecture at the public library by a resident who had just come back from a trip to Cuba. Mingling with the townspeople over coffee at the café and again at the library after the lecture made us realize just how precious it is to travel to a place where the locals are welcoming and easy to get to know.

We had ventured far off the beaten path in Down East Maine, but what treasures we had found.

Down East Maine extends from the gateway city of Bangor south along the Penobscot River to Penobscot Bay and east up the coast to the Canadian border and Passamaquoddy Bay. Interstate 95 and U.S. Route 1 provide easy access to the region.

MAINE STAYS
For traveling RVers, easternmost Maine has everything from forested inland campgrounds to riverside parks and coastal resorts. Here’s a sample.