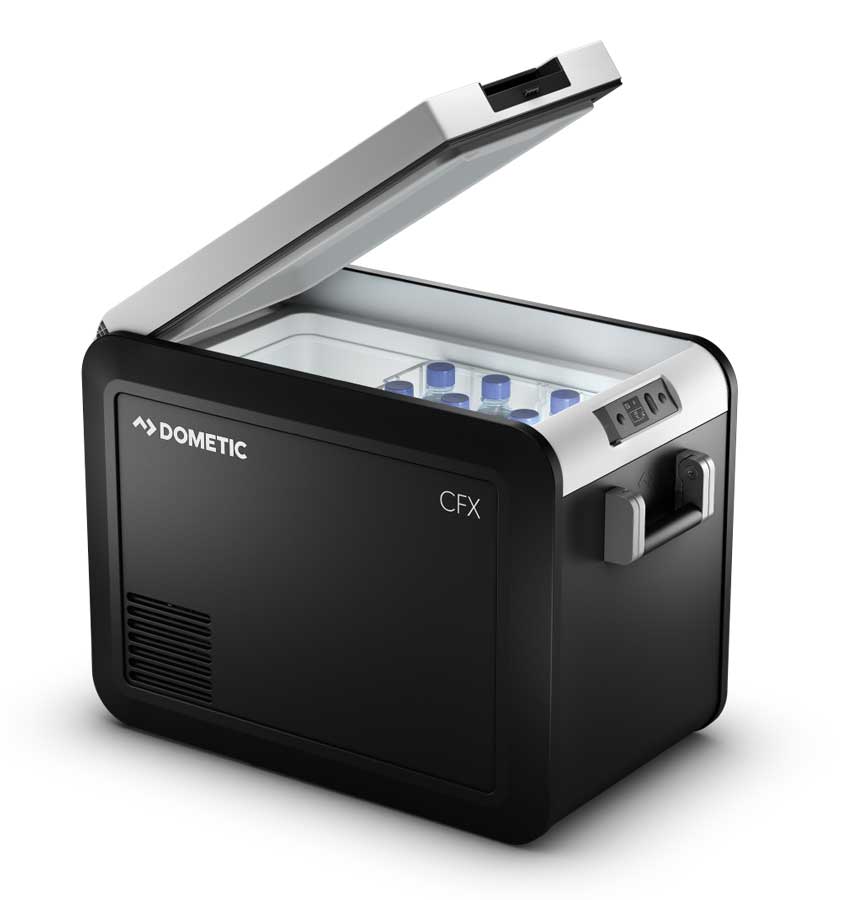 When traveling, I like to keep snacks at the ready. Half an hour after hitting the road, I’m rifling through bags and the cooler looking for something to munch on.

I recently discovered that a powered cooler is a more practical traveling companion than a standard ice chest, where you have to dig through ice to get a dripping can of soda or a water-logged bag of carrots. Dometic’s line of CFX3 powered coolers, aka portable refrigerators, can be powered from the 12-volt DC source in your vehicle, a standard 120-volt AC outlet, or, promoting ultimate portability, with the company’s PLB40 lithium-iron-phosphate battery.

CFX3-series coolers are equipped with a battery monitor that protects against excessive battery discharging when leaving the cooler plugged into a 12-volt DC source without the engine running. The 3 Stage Dynamic Battery Protection System will automatically shut down the refrigerator when the supply voltage falls below a set level.

The rugged CFX3 models are loosely classified as “off-road coolers” and can deep-freeze to minus 7 degrees Fahrenheit. The coolers employ a low-maintenance refrigerant circuit with a compressor to provide cooling. These portable refrigerators are gaining popularity with the small-trailer crowd, where they fit nicely into a compact space or outdoor kitchen.

By the time you’re reading this, Dometic will have upgraded these coolers to include six CFX3 models that have 35- to 100-liter capacities — or in layman’s terms, holding 50 to 150 12-ounce cans. The latest-generation product has improved cooling technology, according to the company, and a reinforced external frame and aluminum-alloy handles. One of them, the CFX3 55IM, has an independent rapid-freeze plate chamber with silicone trays for making ice, while the main compartment remains a refrigerator. According to the company, this is the first such product in the world.

CFX3s are equipped with Bluetooth, and an app with diagnostic tools that monitors and controls cooler temperature and energy consumption and sends alerts to let you know if the lid was left open. 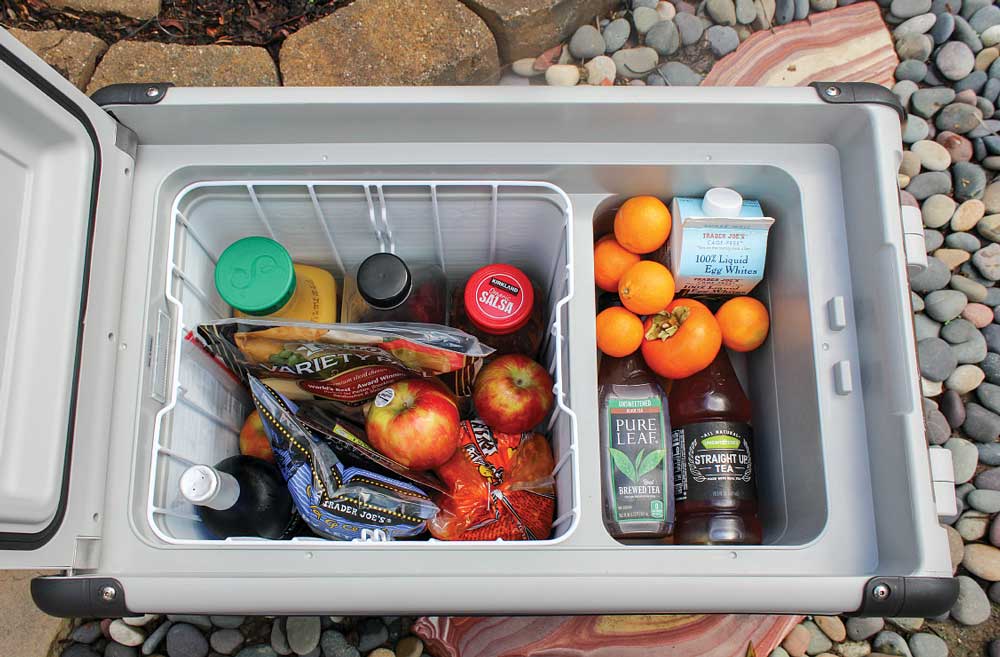 The portable coolers provide excellent refrigeration and organized storage space, and the compressor is quiet. 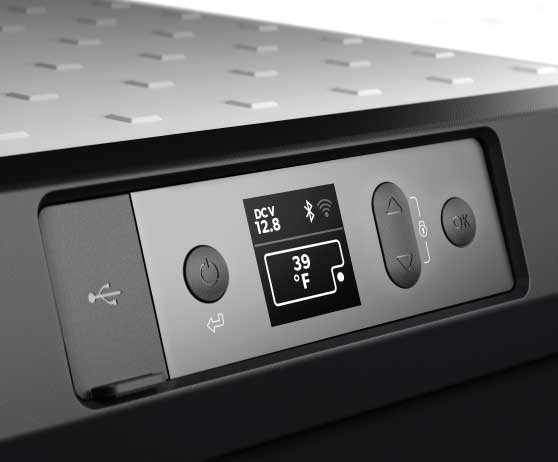 Intuitive soft-touch controls have been redesigned on the CFX3-series coolers. Temperature can be set between minus 7 and 50 degrees.

The cooler is powered by 120-volt AC or 12-volt DC, and cables are included. 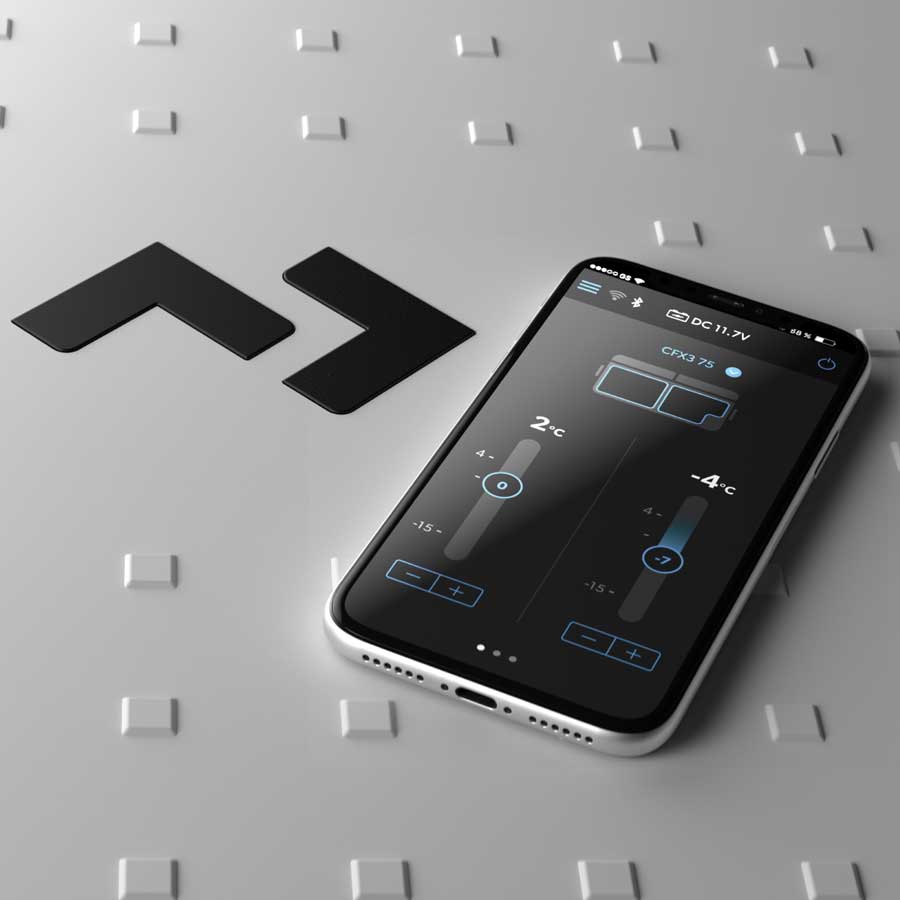 Monitoring cooler temperature and energy consumption is simplified with the Bluetooth feature and app. Leave the lid open? You’ll get notified. 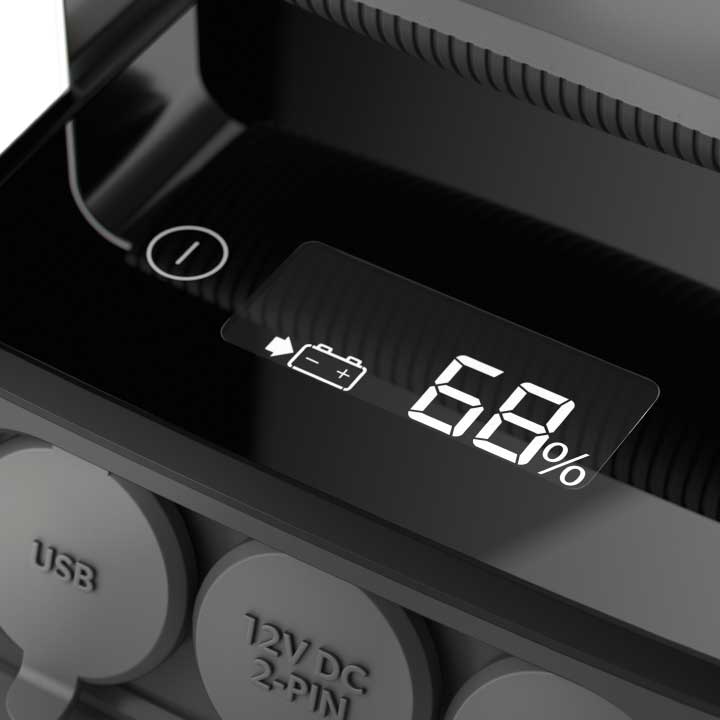 The arrow pointing at the battery symbol indicates the PLB40 is charging. 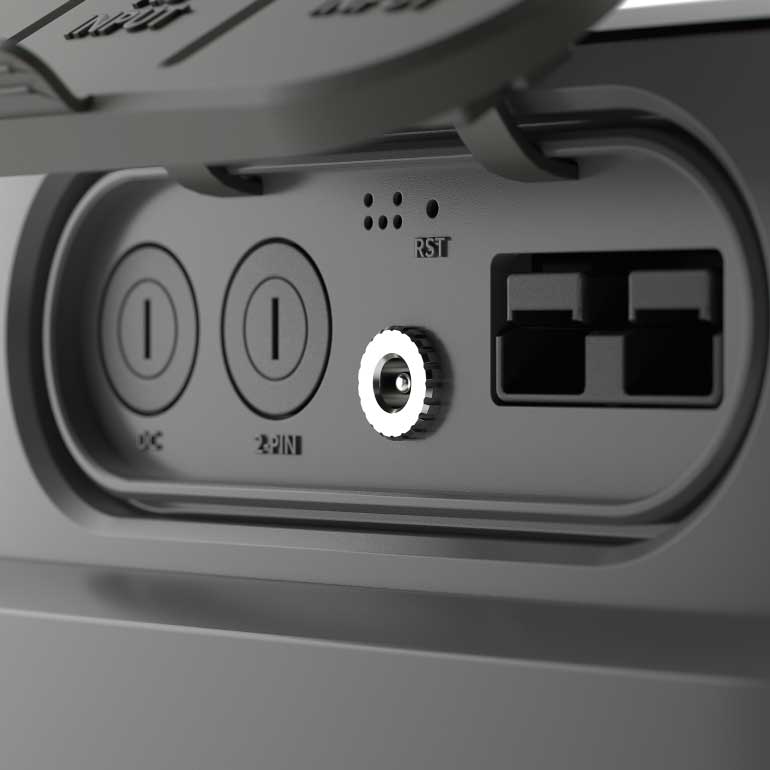 The cooler’s compressor is quiet, kicking on and off occasionally, with a noise level rated at 42 decibels, which is in the “normal” range for a refrigerator. Dometic lists energy consumption at 1 amp at 90 degrees F ambient temperature and the cooler set at 41 degrees. In general, the test cooler stayed about 2 degrees colder than it was set for. It doesn’t get much simpler to set the temperature, and the large digital display is easy to read even in the brightest sunshine.

Weighing just over 40 pounds empty, the 60-can-capacity cooler has a section that’s about 6 inches deep (over the compressor) for smaller items, and the main compartment with a removable wire basket and divider. The cooler is well insulated, utilizing 55-millimeter-thick walls and a heavy-duty lid that latches into place. It cools down quickly, dropping 15 to 20 degrees in less than half an hour. An interior LED light comes on automatically when the lid is opened to prevent rummaging around in the dark. Thick folding handles make it easy for two people to transport when loaded with food and beverages.

Dometic’s line of powered coolers includes the CFF, CF, CDF, TropiCool and CC series in addition to the CFX3 test cooler. Each series is based on three cooling technologies: thermoelectric, absorption and compressor for different climates and cooling needs. Capacities range from 10.5 liters to 100 liters. Besides the rugged CFX3, choices include those with a shoulder strap and others sized for handy access on the passenger seat during travel.

Tipping the scales at just over 16 pounds, the 40-amp-hour/500-watt-hour-capacity battery is rated to provide 40 hours of refrigeration. A stainless-steel handle makes it convenient to carry the battery. How long the battery will power the cooler varies based on ambient temperature, the temperature the cooler is set at, how often you’re in and out of it, and the cold contents of the cooler, among other things.

On one outing, with ambient temperatures ranging from 80 to 95 degrees (the cooler was in shade) and the temperature at the warmest setting (50 degrees), since it was loaded only with drinks and bread, the battery was usable down to 20 percent. The PLB40 lasted for about 30 hours over the course of three days of noncontinuous operation (switched off during the night). On another trip, with ambient temps in the 40s and high 60s and the cooler set for 35 degrees, the battery lasted about 35 hours.

The PLB40 has tagged along on outings ranging from 42 to 95 degrees and has reliably powered the cooler. Insulated covers are sold separately that provide a barrier from sunlight and heat and improve the compressor’s efficiency. And as a bonus, the battery has two USB ports for charging cell phones.

Managing Editor Donya Carlson grew up camping with her family in Southern California and loves spending time hiking, mountain biking, motorcycling, snowboarding and just about anything else outdoors. Before joining the Trailer Life and MotorHome team, she served as managing editor of Rider, a magazine for motorcycle enthusiasts.