We have a 2008 Ford F-350 6.4-liter truck that our local dealer has been fighting with a problem on for the past two years to no avail. We pull a nearly 43-foot Dutchmen Voltage 3800 toy hauler. The truck pulls fine on flat roads, but the minute we hit an incline, it goes into Limp Home Mode (LMH). The service technicians have had the cab off three times, changed the fuel pump three times, fuel rails once, throttle cable once and all the filters twice.

Just before going into LMH, the Clean Filter light comes on. The light eventually goes out after several miles of driving. If I pull over and shut the motor off and restart it, it runs fine until the next hill. It took us five hours to drive from Lake Havasu City, Arizona, to Flagstaff, which is typically a three-hour drive.

The dealership has given up on fixing the truck and won’t touch it anymore. I spoke with a mechanic who works on motorhome diesels, and he told me to remove all the EGR (Exhaust Gas Recirculation) equipment and put on a 4-inch exhaust with a chip. He said if I do that I will never have this problem again and will gain horsepower and torque.
Bryan Chinarian

Without diagnostic trouble codes (DTC), it’s difficult to diagnose issues with our more modern diesel trucks. Kenneth Tripp, owner of Tripp Trucks in Rock Hill, South Carolina, says: “It’s certainly possible Mr. Chinarian’s Super Duty has a DPF-related issue, but I lean more toward a fuel issue. Still, at the end of the day, we can’t make any technical opinions without codes. The 6.4-liter, like all of the more modern engines, is very quick to set fault codes. It sounds like he needs to find another dealership or repair shop to take it to. Just because the truck’s been taken to a dealership doesn’t mean they are qualified.”

As for the motorhome mechanic’s advice on deleting the EGR system entirely, many 6.0/6.4-liter owners have done it. However, to keep your F-350 Super Duty compliant with federal emissions laws, you can’t legally do an “EGR delete,” which removes all of the components related to cooling and cleaning the exhaust once it leaves the 6.4-liter’s compound turbo — and those 2008 to 2010 6.4-liter diesels have multiple emissions components. All problematic.

In addition to the EGR, which flows the exhaust gases through two EGR coolers and an EGR valve and back into the intake, the 6.4-liter has a Diesel Oxidation Catalyst (DOC) in the exhaust downpipe from the turbo before it flows into the DPF (Diesel Particulate Filter). If any one of those parts can’t operate properly from being plugged with diesel exhaust particulates (soot), which they eventually will do, the engine will go it into LMH.

When EGR coolers get plugged, they will not flow the exhaust gases properly, which eventually causes the engine to overheat when pulling grades with a trailer in tow. An overly hot engine leads to it going into LMH to protect itself. The main culprit in the exhaust itself is plugging of the DPF. The engine’s computer system monitors the inlet pressure and outlet pressure of the DPF as a means of monitoring this soot buildup. When the differential of inflow and outflow reaches a predetermined value, the computer initiates a “regeneration,” which is a fancy word for burning out the soot in the DPF.

During a regen, the light on the dash goes on, and the engine dumps raw diesel into the exhaust stream, which ignites and, in theory, burns off all the soot clogging the DPF. In reality, not all that soot is cleaned out, and the DPF eventually needs to be replaced — or removed.

A replacement aftermarket DPF, from XDP, for instance, costs around $1,900; a replacement DOC runs about $900. Replacing the two OEM EGR coolers (one horizontal, one vertical) with a Sinister Diesel EGR cooler kit is around $1,100. Those should cure your 6.4-liter’s LHM ills related to the exhaust and emissions issues while keeping the truck compliant with emissions laws.

Bottom line: Go to a dealership that knows how to pull the DTCs, and then use those codes to track the source of your 6.4-liter’s troubles before throwing more money at it.

Rest easy. The OEM 3.42:1 rear-axle ratio on a 2020 diesel pickup will perform admirably, whether it’s towing a trailer that weighs 10,500 pounds or the max towing capacity that particular 2500HD is rated to tow. The days of optional axle ratios will soon be gone, just like cigarette lighters and ashtrays.

The torque and overall ride and handling of today’s HD pickups are incredible compared to the same trucks that were built even a few years back. Torque is what gets a load moving and keeps it moving. The combination of our most modern light-duty diesel engines with eight- and 10-speed transmissions that transfer that torque to the differentials has really changed how we think about axle ratios.

Just a few years back, RVers would spec out their tow vehicle with lower (numerically higher) axle ratios to replace the OEM 3.42 and 3.55 ratios that were often the stock axle gearing. It was common to select 3.73:1, 3.92:1 or, when really heavy trailers were being towed, 4.10:1 rear-axle ratios. Those ratios were adequate for the power the engines were producing at the time and the four-, five- and six-speed automatics paired with them.

Now we have new automatics with twice the gear-ratio range of older versions, with engines producing more than a 1,000 lbs-ft of torque and more than 450 horsepower. That combination virtually does away with the need for today’s pickup buyers worrying about what axle ratio best suits their towing needs. The transmission’s wide range of internal ratios takes care of all that. 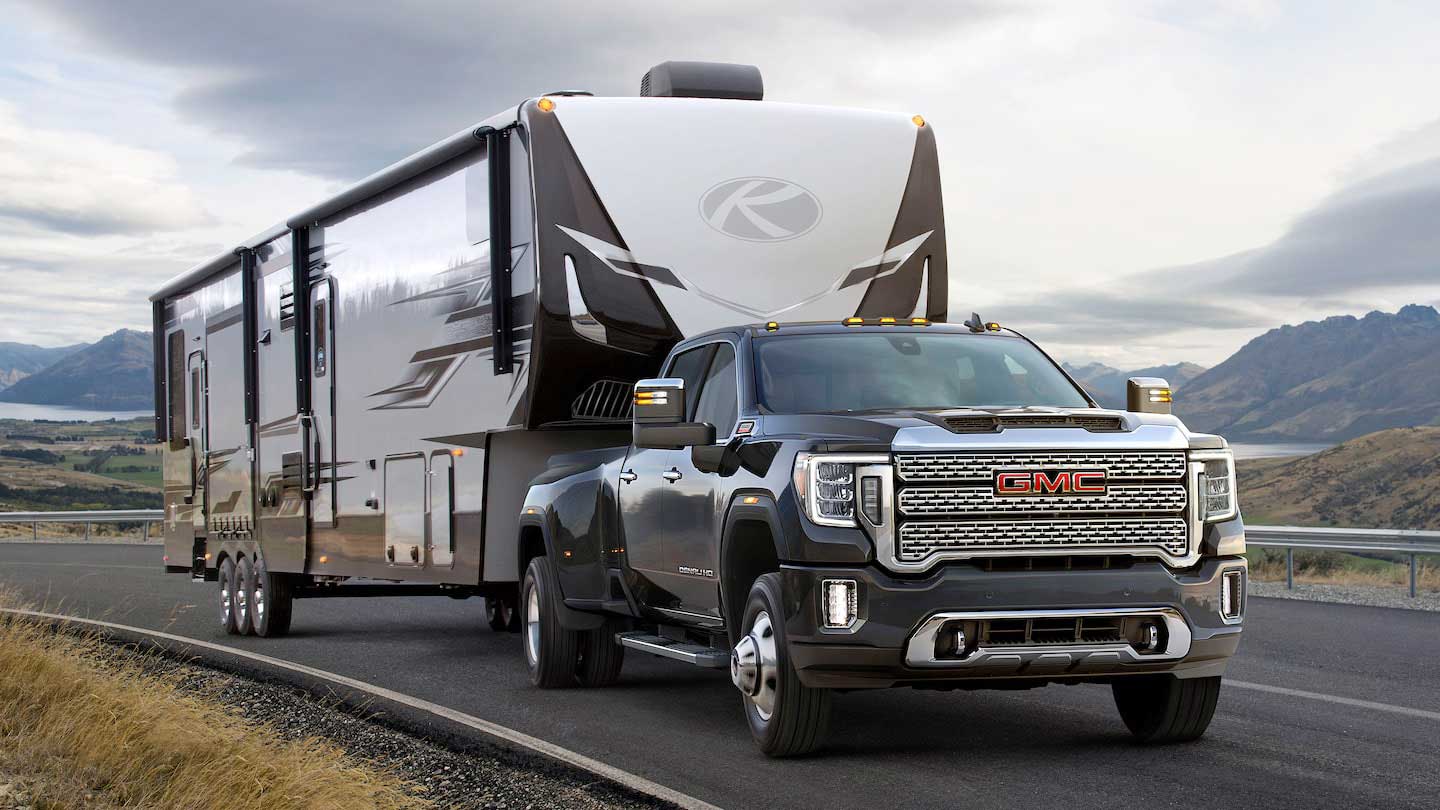 The newest diesel pickups have eight- and 10-speed automatics that provide deep first and second gears, almost eliminating the need for buyers to choose alternate axle ratios when the engines are making more than 1,000 lbs-ft of torque and north of 400 horsepower. Photo: General Motors