I have a 2005 Ford F-350 DRW 6.0-liter Power Stroke with 110,000 miles. It’s been pretty trouble-free while pulling a 15,000-pound fifth-wheel trailer about 8,000 miles per year. I’ve always heard that the OEM head bolts can be a problem and would be better replaced by ARP studs. My question: Can you replace the head bolts with ARP studs one bolt at a time, carefully torqueing them to spec in a recommended torque pattern?
Wayne Peck

This can and has been done by used-car lots, repair shops and DIYers alike. Sometimes, replacing the studs in this way works, but more often than not, it doesn’t. The only reason studs are replaced in this manner is the person or shop doing the work is trying to cut corners, instead of actually making bulletproof repairs or upgrades that rectify known OEM issues with the 6.0Ls. Replacing studs without pulling the heads doesn’t require a hoist to lift up the cab, which is done so the heads can be easily accessed and removed. Lifting the cab off the frame adds six to eight hours of labor.

Here’s the heart of the issue: The studs are not the only concern with the 6.0-liter Power Strokes — it’s the integrity of the heads (they are prone to warping), valves, valve seats (known for cracking), pistons and head gaskets that also needs to be inspected. If that’s not done, just installing the stronger ARP studs one at a time usually leads to pulling the heads shortly thereafter. It’s not uncommon for 6.0L head gaskets to be leaking and the owner not know it until the head gasket turns into a catastrophic failure.

Here’s what the installation instructions on ARP’s website say related to preventing water leaks: “Prior to installing your new head studs, it is very important that you have clean threads on both the block and the studs. First, clean up all the threads in the block with a thread-cleaning chaser, not a regular tap. Thread chasers are designed so that they do not remove material from threads but merely remove debris and corrosion. Make sure you go all the way to the end of the threads in the bottom of the hole. Then clean out all the holes in the block with brake or carburetor cleaner to remove all the debris. Make sure the threads on the new studs are clean. Use a liberal amount of ARP thread sealer, high-temp silicone or Loctite to ensure that there will be no air pockets that can cause leaks.”

Dunks Performance, a shop in Springfield, Oregon, that specializes in diesel pickup repair work, including many 6.0L/6.4L Ford Power Strokes, will not replace head studs one at a time. “We pull the cab and pull the heads,” says owner Michael Dunks Jr. “That [replacing head studs one at a time] is something used-car lots will do and then claim the truck is bulletproofed. It’s so common for gasket failure and/or head damage in these engines, simply replacing head studs will not address those issues. Not to mention potential [water] leaks created by the one-at-a-time method. If you do that, head gasket failure is sure to happen soon after.”

I asked the same question of Kenneth Tripp, owner of Tripp Trucks in Rock Hill, South Carolina, a shop that specializes in Power Strokes. Tripp was on the Power Stroke engineering team for years so he has extensive knowledge of everything from the 7.3Ls to the current 6.7Ls. Here’s his answer about the one-at-a-time method of replacing head studs: “Absolutely not okay. The heads must be properly torqued to ensure the gaskets won’t fail. It is literally that simple. I have had to redo so many sets of gaskets on trucks with ARP studs because they weren’t done correctly to start with, and I would say most of it is because people don’t understand ‘torque chatter.’ But I am also confident that many of these failed head gaskets were the result of the studs being installed in a manner like you speak of. These head studs are non-forgiving. They do not stretch. The cylinder pressures on these 6.0-liter diesel engines are extremely high. Couple that with the fact that there are only four fasteners per cylinder, and installation must be done to perfection. At my shop every technician has a Snap-On torque wrench that never touches anything but head studs.”

To answer your question, Wayne, yes, the studs can be replaced one at a time. The bigger question is, “Is it worth the risk?” I don’t think it is.

I have a 2013 Ram 6.7-liter diesel with 54,00 miles on it. The owner’s manual says to replace the two fuel filters every 15,000 miles. That costs $300 at the dealership. Is there any way to extend the interval and stay within the warranty?
Randy Hiseley

Starting with the 2013 6.7-liter engine, Ram went to the two-filter system with the fuel/water separator mounted on the driver’s-side frame just forward of the rear axle and a secondary filter on the back of the engine. Combined with the cost of the factory branded filters and shop labor to replace them, the cost is, as you say, usually near $300.

There’s no way to “extend” filter changes beyond the factory-recommended cycle, nor would you want to, as that would be cause for a dealer to challenge fuel-system-related warranty issues, if any arose. If anything, filters and fluid changes should be done earlier than what is stated in the owner’s manuals.

One way to cut fuel-filter-change costs is to install a Ram 6.7-liter dual-filter conversion kit that adds a CAT two-micron fuel filter in-line with the fuel/water separator filter on the frame rail. Doing this reduces the cost of replacing the filters because the CAT filter is less expensive than OEM, and having both filters in plain sight and easily accessible makes the filter change a 15-minute job, and one you can do yourself. With the CAT secondary filter cleaning the fuel before it reaches the OEM filter at the engine, the engine fuel filter would probably need to be changed only every couple years because of potential algae growth.

You can also use a Baldwin BF46031 fuel/water filter instead of the Racor PFF54529. Throttle-Up Industries has the dual fuel-filter conversion kit for around $195.

If you want to go a step further, you could install an aftermarket fuel filtration/lift pump system such as those offered by FASS and AirDog, and do away with the filter on the engine using a Fleece Engineering engine fuel-filter delete kit ($60). But then you’d have to spent about a grand, and the cost-benefit analysis becomes the deciding factor with as few miles as you put on your Ram every year. 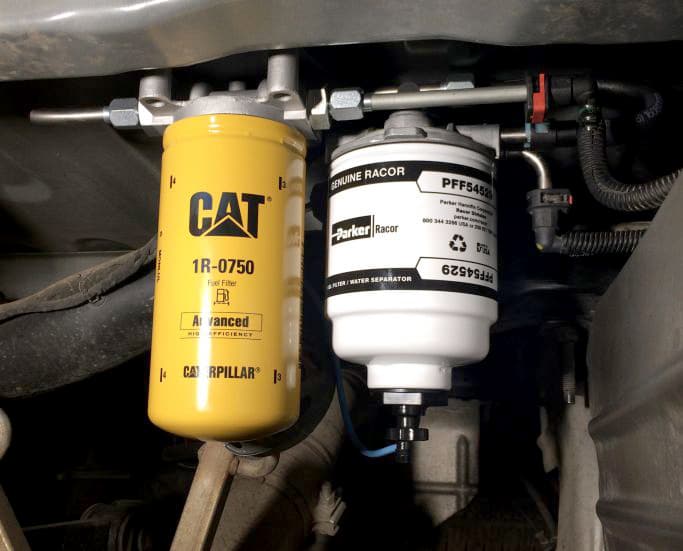 One way to reduce the cost of fuel-filter replacement in the 6.7L Rams is to install a conversion kit that uses a CAT fuel filter in-line with the factory fuel/water separator filter mounted on the truck’s frame rail. This kit is from Throttle-Up Industries. Photo: Courtesy of Throttle-Up