I have a 2011 Ford F-350 6.7-liter long-bed Crew Cab (King Ranch) in like-new condition that I bought four years ago with 12,000 miles on it. It now has 32,000 miles. We pull a Northwood Arctic Fox 27T fifth-wheel, which makes up about 8,000 of those miles. It’s not a daily driver and does sit for several weeks at a time. I change oil and filters each year, regardless of miles. I use a diesel additive for fuel and oil, and I try to idle down for several minutes after driving to cool down the turbo.

Prior to a recent trip, the engine light came on and the Diagnostic Trouble Code (DTC) was diagnosed as diesel exhaust fluid (DEF) related, which resulted in having the DEF heater and pump replaced. I was told that, although the miles are low, the truck still has age, and that could have been the culprit.

My 6.7-liter is first-generation. Can you offer any advice on maintenance, driving habits, and reported parts that I should look out for? I will say that it pulls 10,000 pounds with ease, and with the exception of that one issue, it’s been trouble-free.
Don Prince

Ford’s 6.7-liter Power Stroke is a wonderful engine in all aspects, compared to the previous Super Duty offerings, with far greater power and overall reliability than other Ford diesels. There are few mechanical problems that appear to be common across the board, whether first-generation (2011 to 2014) or second (2015 to present). One commonality is upper-oil-pan gasket leaks.

Another issue in the earlier 6.7Ls seems to be the failure of the crankcase ventilation (CCV) oil-separator assembly, which will throw a DTC PO4DB. Ford sent out a notice on this (FSA 17M04), so you might check with the service manager at your Ford dealer to see if it applies to your truck.

First-gen 6.7Ls are also known to leak at the vacuum-pump gasket, which can appear to be an oil leak from the front main seal. Of course, failures of the exhaust gas temperature (EGT) sensors are fairly common, as is a failure of the EGR cooler — even on low-mileage engines such as yours — that will usually trip a DTC P0401 code.

Also be aware that the VGT Garrett GT32 turbos on those early 6.7Ls have seen their fair share of bearing failures, which led to the change in turbo size/design in the 2017 and newer models, and many owners are now retrofitting 2011 to 2106 models with the Garrett GT37 or similar turbo.

Then there’s the DEF issue you already experienced: the heating element inside the DEF sending unit failing, requiring replacement of the entire assembly.

As for maintenance tips and driving, continue doing what you are doing. Change all the filters per the owner’s manual and diesel-engine supplement guidelines as stated under “severe duty” use. Use the highest quality lubricants available.

One tip a Power Stroke engineer that worked on the development of the 6.7-liter models passed on to me is having the transmission flushed/serviced every 75,000 miles, instead of at 150,000 miles as stated in the Scheduled Maintenance Guide, and replacing the accessory drive belt(s) at the same time.

If you plan on keeping this truck around for a long time, taking care of both the engine and the transmission will pay off years down the road compared to someone who was less diligent on the preventive-maintenance aspects.

What is the maximum safe operating temperature for my Allison transmission?
John Giuffre

A general rule of thumb is a GM Duramax Allison five- and six-speed automatic will typically operate around 170 to 200 degrees Fahrenheit in non-towing/hauling conditions. The ideal operating temp is around 175 degrees. Towing and truck-camper hauling will typically push those temperatures upward to 210 to 240 degrees.

GM included the following in the diesel supplement for earlier Duramaxes: “If your vehicle has an Allison transmission, and the fluid reaches temperatures of approximately 275 degrees Fahrenheit or greater, the Driver Information Center will display a “Trans Hot Idle Engine” warning message, and a chime will sound until the temperature falls below 265 degrees. Pull the vehicle off the roadway when it is safe to do so. Set the parking brake, place the transmission in Park and allow the engine to idle until the transmission temperature falls below 265 degrees.”

For some reason, the later manuals don’t mention this information. If you are seeing temps hovering around 200 to 210 degrees in non-towing driving, and 230 to 240 degrees when towing, I recommend that you have the factory cooling system checked out and flushed, and consider having an auxiliary transmission cooler installed or upgrading to a more efficient aftermarket radiator.

The reason for taking transmission heat very seriously is that heat breaks down the transmission fluid’s lubricating qualities and friction characteristics. One transmission tech explained it this way: “High fluid temps, usually above 250 degrees, causes varnish to start forming on the internal parts. The clutches begin to slip, heat from that friction keeps building, and rubber seals and O-rings begin to harden, which can lead to leaks and pressure losses.”

I have a 2013 HD Chevy diesel with 135,000 miles, and the check engine light (CEL) just came on and says “Service Exhaust Fluid System.” I have checked and topped off the DEF fluid, and still, the message remains on. What is your best guess for what is causing the problem?
Floyd Harrell

The first word in the CEL warning is “Service.” It doesn’t say “low fluid.” What’s happened is there has been what diesel technicians call a “soft” DTC thrown. It could be a code such as P2BAA (NOx Exceedance – Low Reagent Consumption), P249E (Closed Loop Reductant Injection Control at Limit – Flow Too High), or one of two dozen or so other codes related to DEF in the 2010 to 2105 6.6-liter Duramax-powered GM HD pickups.

GM issued a service bulletin in September 2014 (Bulletin # 12-06-04-002C) that addresses this issue. In this instance, the service bulletin says, “Service Exhaust Fluid System (Tamper): This message displays when a DTC sets related to the DEF system that is interpreted as tampering with the system.” Then it provides a detailed flowchart for the technician to follow in diagnosing/repairing the problem. If the exhaust and DEF systems are still stock (no deletes), and the technician runs through the DTCs, the problem most likely will point to a bad sensor or other failed component related to the monitoring of the exhaust and DEF. The parts are usually easily replaced and the DTC monitoring system reset.

Keith, a “squeaking” exhaust brake on the 6.7-liter Cummins is usually caused by an exhaust leak between the turbo and the exhaust manifold. When the exhaust brake actuates, it restricts the exhaust from exiting the engine, and that backpressure is what provides the “exhaust braking.” When the backpressure builds, a lot of pressure is exerted against the gaskets. If a gasket is bad, or the mounting bolts are not torqued properly or are even broken, escaping exhaust over and around the gasket acts just like air going over a reed in a clarinet or saxophone, which makes the squeaking, squealing sound.

Look closely where the exhaust manifold connects to the head at the rear of the engine. Do you see soot around the back of the manifold? If so, it’s time to replace the manifold.

Check the V-clamp at the EGR shutoff. Sometimes the clamp will work loose or even break. That’ll cause an exhaust-brake squeak or squeal when activated.

Also, check the mounting of the EGR cooler to the manifold. If the gasket is bad or the mounting bolts are the least bit loose, exhaust backpressure from the exhaust brake will pass by the gasket, causing a “squeal” during exhaust-brake activation.

Villalobos says one trick Mobile Diesel Service uses in its diesel/RV repair center to find such leaks is to take a spray bottle filled with soapy water and spray it over the suspected area while the engine is running. If there’s any exhaust leak, air bubbles pinpoint the problem area. “It’s surprising how fast an exhaust leak shows up,” says Ruben. “Saves a lot of time and guesswork.” 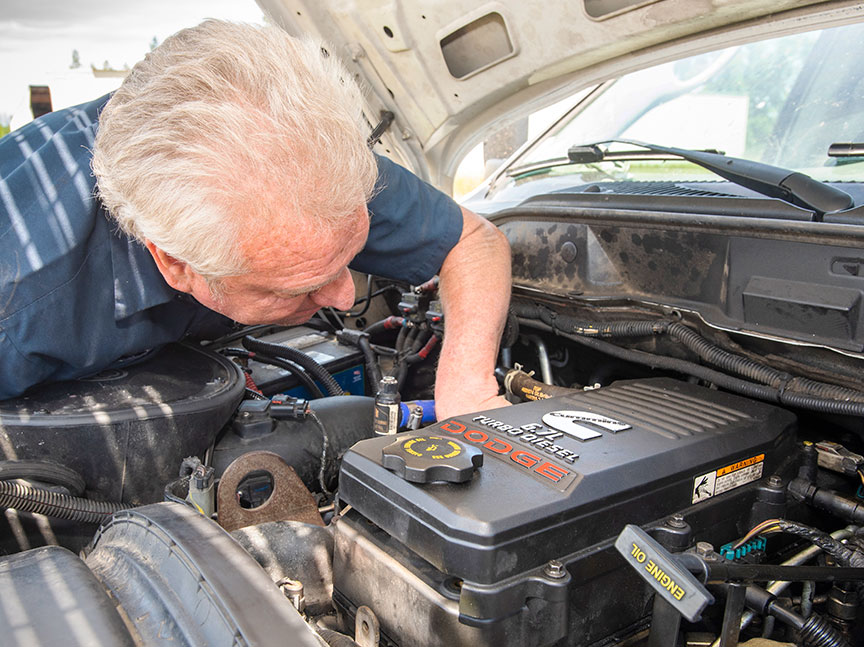 A squeak or squealing noise when the exhaust brake on a Cummins 6.7-liter is activated is almost always related to an exhaust leak at the exhaust manifold, EGR valve or around the turbo. The sound is usually from exhaust backpressure escaping around a gasket.