As a newbie with a diesel pickup (2017 GMC HD 2500 with Duramax), I would like to know the maximum rpm that the engine can be used with the engine brake down a hill, and if I have to go up or down the gears (manually) on L position to avoid this having an rpm too high.
Francois Jobin

The GM diesel engineers who build the Chevrolet Silverado/GMC Sierra HDs took engine rpm into serious consideration when they developed the Auto Grade Braking and engine-exhaust-braking features. The LP5 Duramax in the 2017 and newer pickups has a maximum engine rpm of 3,450 under power, and up to 4,800 rpm when grade braking. The computer systems that match the 10-speed Allison to the workings of the Duramax will protect the engine, so you don’t have to worry about over-revving it. In fact, GM engineers make it very difficult to do anything that will lead to over-rev damage.

If you shift into too low a gear that would pose an engine over-rev issue, which I have experienced, you’ll get a message that the shift function you choose is denied. At that point the engine will just rev up to the rev limiter and stay there until the vehicle speed is low enough to make the lower gear selection you want within the LP5’s rev limit. GM has done a remarkable job designing these invaluable towing safety features in the new-generation HDs.

As a side note, I always turn the exhaust brake feature to On when towing with the LP5 because the computer will activate it whenever it deems it necessary to assist the grade-braking mode. Leaving the exhaust brake activated also allows it to automatically downshift the transmission when more braking is necessary or to hold a selected speed when in cruise-control mode. If the transmission is in “manual,” that grade-braking automatic downshift doesn’t function.

I read in your online posts answers to questions about injector problems with Ford and Duramax diesels. Do you get similar questions from Ram diesel owners? I have a 2003 Ram 2500 5.9L with 170,000 miles. I had to replace the injectors recently because the truck just quit working one morning. It would not start.
William Hopkins

Injectors wear out, just like any other component of a diesel. It doesn’t matter if it’s a Duramax, Cummins or Power Stroke. All injectors get tired and weak over time, the mechanical components inside wear down or fail, the solenoids go bad, and the body of the injector can crack due to the constant high-pressure stress and normal engine heating cycles.

Diesel injectors are a common wear item. How long they last depends on multiple factors, the biggest being how clean the fuel is that is running through them. Any contamination from water or debris of any type will drastically shorten injector life. Photo: Bruce W. Smith

The injectors in your Cummins operate between 5,000 psi (idle) and 30,000 psi (wide-open throttle.) That fuel passes through a tiny orifice sealed by a tiny check ball. Any debris in the fuel creates immediate wear issues between that ball and the seat, which lead to poor-performing injectors. Water in the fuel reduces lubricity in the injectors, again leading to metal-on-metal sealing problems. Depending on those factors that create wear, injectors may need to be replaced at 60,000 miles, or they can last 300,000 miles. It all depends on the quality of fuel running through them and how well the injectors are manufactured.

The biggest single problem that causes injectors to prematurely fail is contaminants. Todd Emmert, machine-shop manager for Scheid Diesel, always tells customers, “The cause of your injector issues usually boils down to three key words: “Fuel, fuel and fuel.”

I have a 2015 Jeep Grand Cherokee 3.0L EcoDiesel with 103,000 miles on it. The oil temperature is getting way too hot in normal operation, not towing. I did an oil and filter change and also changed the thermostat. Antifreeze is normal levels; fans kick on when they are supposed to. I’m lost. I really don’t want to spend $800 on a water pump if that’s not the real cause. No leaks whatsoever on this vehicle.
Randy Cranford

You didn’t mention what the oil temperature is when your Jeep Grand Cherokee is “way too hot.” The typical non-towing coolant temps for that engine are in the 200 to 215 F range, depending on outside air temperature and driving conditions, i.e., city, stop-and-go, highway cruising. Engine-oil temps are usually about 10 F degrees hotter. The cooling fan should kick on around 230 F, with the warning for oil being too hot popping up on the dash around 265 degrees.

If your 3.0L’s operating temps are running hotter, it’d be wise to have a technician scan for codes and check to make sure the thermostat, EGR cooler and radiator are working properly. An auxiliary or replacement aftermarket oil cooler is difficult to put in the Grand Cherokee because of space limitations and plumbing, not to mention potential warranty concerns. D&J Diesel used to offer a kit for the Eco JGC but discontinued it this year (2020) due to “multiple parts and some of these parts are being discontinued or changed and are not up to our expectations of quality.”

I have a 2016 Chevy 2500 Duramax with 65,000 miles. It recently started losing a very small amount of antifreeze, just enough to make the Add Coolant light come on. I’ve had to add fluid three or four times in the last 5,000 miles — maybe 1 to 1½ quart total. Any thoughts on this would be appreciated.
James Hoffman

One loss-of-coolant issue with the 6.6L Duramax is bad head gasket(s). But they are not the only place coolant can escape. The first places I’d check would be the integrity of the coolant (surge) tank, radiator and lower radiator hose. You should be able to see and/or smell if there has been coolant leaking at each of those components. The surge tank can crack, the cap can fail, the radiator can get a pinhole or leak internally, and the clamp on the lower radiator hose can work loose. Also check closely the metal tabs on the driver’s-side top of the radiator tank. They are known to crack, as is the plastic tank itself. These are all areas where coolant can escape somewhat undetected.

Slow loss of engine coolant in a Duramax can be the result of many things including a failing EGR cooler, bad head gasket, internal or external leaks in the radiator, loose lower radiator hose clamp or a leak in the expansion tank. The EGR cooler is often the culprit, so pressure testing it is a good diagnostic. Photo: Bruce W. Smith

If those are all in good condition, then I’d turn my attention to the exhaust gas recirculation (EGR) cooler. If it’s failing (leaking internally), coolant can pass through the exhaust system on the passenger-side bank of cylinders and out the exhaust; you’d never notice it happening. The only way to be sure the integrity of the EGR cooler is good is to have a technician run an EGR-cooler pressure test using the correct adapter kit (GM part EN-48974-20).

If all is well with the cooler, then attention turns to the more expensive area of the 6.6L: the condition of head gaskets and heads. A diesel technician can test them via a pressure test. (See GM Technical Service Bulletin 16-NA-204, June 2016.)

I own a 2006 Chevy 2500HD Extended Cab with two-wheel drive. I have replaced the transmission tubes twice, and when I took it in for service recently, the dealership told me the hoses/tubes were leaking again. Are there any aftermarket braised-wire hoses that I can replace the OEM parts with?
Doyle France

You have a couple of options to replace the three metal tubes with hoses to your LBZ/LMM Chevrolet’s Allison. 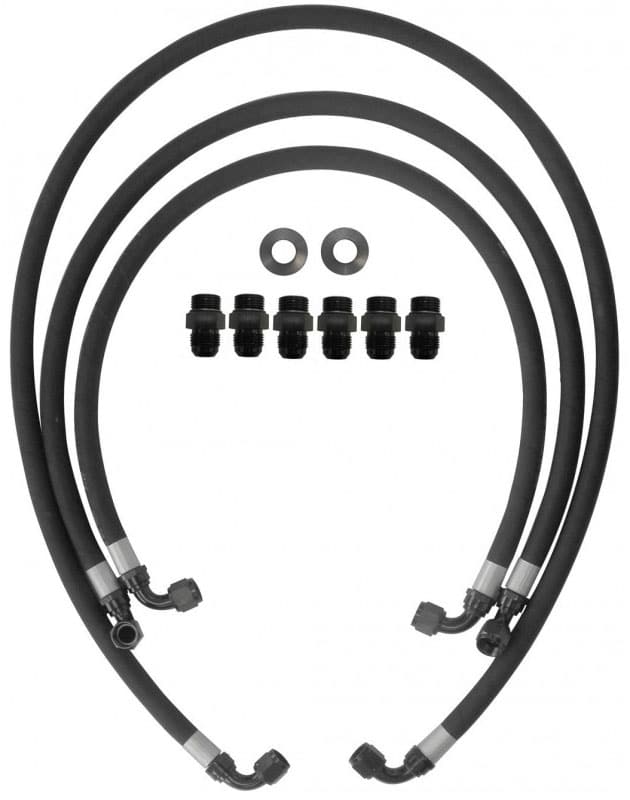 Steel-tube transmission-cooler lines on older GM Duramax Allison transmissions tend to leak because of the flex between the truck frame and the transmission. The fix is to replace the hard lines with steel-braided hoses like those in this kit from Fleece Performance Engineering.

Start by taking photos of how each line is connected and routed. These lines are bent to a strict tolerance to fit around the transmission and frame, as well as the oil pan. (You’ll need to remove the skid plates first.)

Then disconnect the tubes and take them to a shop that builds hydraulic lines and hoses, and have them make replacements for you out of braided hose and correct 10 AN fittings. They should be able to make them for you for less than $150. FYI, the Allison coolant lines have about 260 psi in them at max pressure.

The other option is to buy the premade hose-replacement kit from Fleece Performance Products. The kit, which sells for about $270 and has all the washers and connectors, is sold through a number of online aftermarket diesel stores.

Either way, your leaking transmission-line issue will be solved once and for all.