I have a 2017 GMC Sierra 3500HD. There is a recall on the engine-heater cord with no current fix. What can I do since I moved to a state where it routinely gets below 30 degrees Fahrenheit?
Albert Gambetti

Dealers are notifying owners when the replacement heater block and cord are available. Until then, don’t use it. What you can do if you live in the northern climes is use the proper engine oil for the LP5, which is 5W40 CK-4 spec for diesel application, a full synthetic. Some owners of the new Duramaxes and big rigs are running CK-4 10W30 HDEO (Heavy Duty Engine Oil.) Note: Some CK-4 HDEOs have an API SN gasoline rating, which you want to avoid because they don’t have enough phosphorus to reduce wear in a diesel.

You should also use diesel fuel with the highest cetane (CN) number available. A high CN means the fuel ignites faster, producing a longer, cleaner fuel burn than diesel with a lower CN. It’s also wise to use a diesel fuel additive that has anti-gelling and a cetane booster. The benefits such additives bring to the table are improved cold-weather starts, reduced combustion noise when the engine is cold, and reduced harmful emissions when the engine reaches full operating temperature. Dosing the tank at every fill-up with fuel additives that have CN improvers as part of the mix is a way of ensuring the diesel engine in your truck works as smoothly as it can when cold, and that it runs cleaner and has a longer life than it would without such a fuel treatment.

It’s important to note that cetane-boosting additives should be used only as recommended; more is not necessarily better. Too much 2-Ethylhexyl nitrate, the common chemical that boosts CN, can lead to altered fuel density, according to the experts I spoke with.

I have a 2015 Ford F-350 6.7-liter, and the diesel exhaust fluid (DEF) light/system check just says “OK.” It doesn’t indicate half-full or anything. I drove a later model, and it actually shows DEF level when doing a system check. Does the 2015 have a level indicator for the DEF that I can’t find?
Jackie Harris

This is a common question asked by owners of the pre-2019 6.7L Power Stroke. Check your owner’s manual, and it should explain how to scroll through the various windows to get to that indicator.

Ford uses a crude level-sensor system to monitor the DEF in those 6.7Ls that consists of three metal rods of varying lengths and a ground rod. The DEF shorts out each rod, which signals the powertrain control module (PCM) to flash a message on the instrument cluster such as “500 Miles to Empty,” “250 Miles to Empty’” and “In 50 miles, Speed Limited to 50 mph.”

It’s not unusual for these DEF sensors to be less than accurate. Complaints from owners led Ford to send out a Technical Service Bulletin (TSB) in 2018 to fix inaccurate DEF systems by having the PCM reprogrammed to be more responsive. Ford also issued a Technical Service Bulletin in 2018 (18-7076) with a chart showing “typical” DEF mileage between refills. The chart shows F-250 6.7Ls with 3.55:1 axle ratio, and used primarily for towing, city driving, or aggressive driving, had a range between 2,800 and 5,800 miles. The same chart showed 6.7Ls with 3.73s had a DEF range between fill-ups of 2,000 and 4,200 miles.

On the 2019 and newer Super Duties, you can select having the DEF gauge display all the time on the right-most dash gauge. Just read the owner’s manual and the diesel supplement on how to select what gauges and display you want to view. 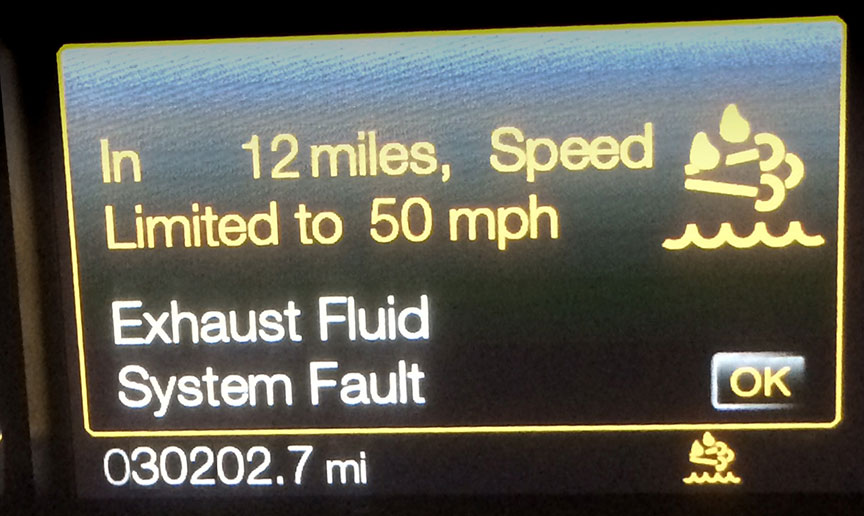 Ford DEF indicators on older 6.7Ls give only a general indication of how many miles to empty instead of actual percentage related to how much fluid is in the diesel exhaust fluid reservoir. Ford sent out a Technical Service Bulletin in 2018 that showed typical DEF use in 6.7Ls.

We have a 2003 Ford F-350 7.3-liter Power Stroke. In the past three years, we have replaced three hydraulic clutch actuator assemblies. Is there a better choice, other than the stock one?
Jeff and Karen Schaeffer

The external clutch slave cylinders on the 1999 to 2003 Ford HD 7.3Ls with the ZF six-speed wear out and leak fluid, causing shifter issues. The quality of stock OEM replacements, as you have found, leaves a lot to be desired. I’d step up to one from South Bend. Ford TSB 99-1-6 and 01-24-1 (October 2001) address the clutch issue in some depth.

What many 7.3L owners do is replace both the master and slave cylinders at the same time, as a new slave cylinder may overpower the old master cylinder. Cylinder kits are available pre-bled and filled, making their replacement easier. You can find the instructions for replacing them in the Ford Workshop Manual in Section 308.

I enjoyed Trailer Life’s Chevrolet Silverado HD article about the new Duramax engine and its ability to handle far larger payloads. I have a Ram 3500 with a 6.7-liter diesel engine, and putting the truck near the weight limit seems to put undue wear and pressure on the braking. Do the new Duramax trucks have some secondary or auxiliary brake booster or heavier brakes?
Joseph Davidson

GM engineers spent a lot of time testing and designing the 2020 GMC and Silverado HDs so they can safely handle the largest trailered payloads. Among the multitude of changes is the new Allison 10-speed that has a wider range of gearing and is integrated with Auto Grade Braking that automatically downshifts the transmission to help slow the vehicle, which takes a considerable load off the brakes. The new trucks also incorporate a more refined and aggressive engine exhaust brake system on the LP5 6.6L Duramax.

According to GM (and our own time behind the wheel of 2020 GM HDs), “When the diesel exhaust brake is active, transmission downshifts may be automatically selected to increase engine speed, which increases the effectiveness of the exhaust brake. The number of downshifts selected is determined by the length of time the brakes are applied and the rate the vehicle is slowing. The system delivers the correct amount of braking to assist in vehicle control. The heavier the vehicle load, the more active the engine exhaust brake will be.”

Rest assured, from what I’ve seen, these two ways to slow the vehicle under heavy loads should really minimize wear on the brake pads and rotors. If you have a new HD and want to upgrade the brakes, there are several “big brake” kits available for the front.

Ford started using the Bosch CP4.2 high-pressure fuel-injection pump on the 2015 Ford 6.7Ls. It, like those on the GM Duramax 6.6Ls, has been problematic. And, like with GM, some Super Duty owners filed a class-action lawsuit against Ford related to compensation, etc., for the failed pump and resulting repair costs.

There’s a good explanatory video by Thoroughbred Diesel that explains how the CP4.2 pump works. As I have mentioned in a previous article and posts, the CP4.2 pump is extremely vulnerable to failure because of contaminated fuel or air getting into the fuel system. When the pump fails, all those tiny bits of debris are pumped through the entire fuel system from the fuel tank to the injectors. Repair requires replacing everything in the fuel system, which can cost upward of $10,000.

Unfortunately, the configuration of the CP4.2 pump in the 6.7L Power Stroke doesn’t make a CP4-to-CP3 swap doable, as can be done in the Duramax. The only thing Ford owners can do is install a “disaster prevention kit,” which is essentially a fuel bypass that keeps the debris from the exploded CP4 pump’s bottom end from circulating through the engine’s fuel system. S&S Diesel Motorsport sells the kit direct or thorough diesel outlets such as Thoroughbred Diesel for about $360. The kit is CARB-certified, so it’s legal in all 50 states. 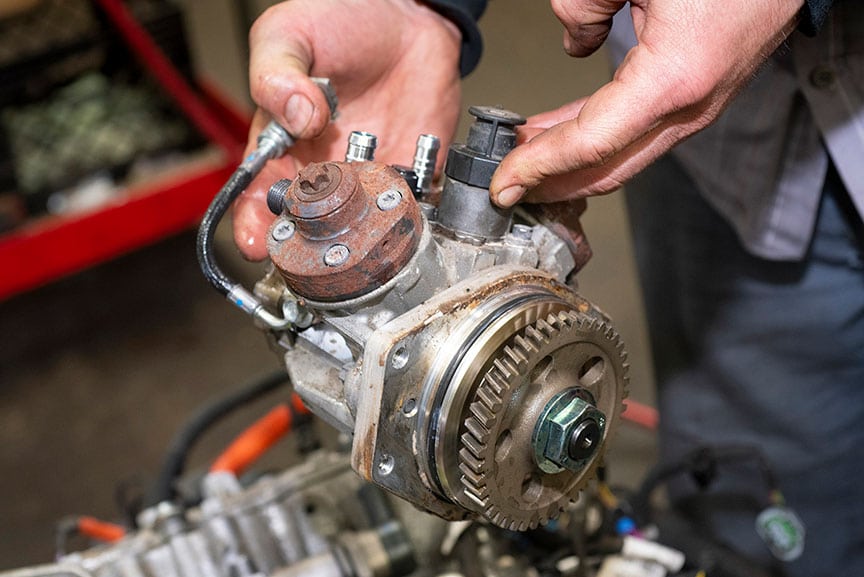 The Bosch CP4.2 high-pressure fuel-injection pump used on the 6.7L Power Strokes has the same failure issues as those used for the 6.6L LML GM Duramax (shown.) The difference is that the Ford version can’t be swapped out for a more reliable CP3, as done in the Duramax. An S&S Diesel Bypass Kit is the best preventive measure to keep Ford repair costs limited to just the pump. Photo: Bruce W. Smith