I’m debating between 3.42 and 3.73 axles on the new Ram 3500 diesel dually. I understand fuel mileage will be better with the 3.42, but how much better under similar conditions — e.g., pulling a large fifth-wheel? There are lots of factors besides axle ratios that won’t change (wind and tire-rolling resistance, for instance), so I’m guessing the difference will be less than the 3.73/3.42 ratio would indicate.
Michael Brown, West Lafayette, Indiana

A lot depends on how “large” your fiver is and the type of terrain the majority of your travels take you to. The 2018 Ram 3500 dual-rear-wheel (DRW) configurations all vary about 2,000 pounds in maximum towing capacity when it comes to axle ratios, with the “lower” (numerically higher) 3.73 ratio having the higher tow rating than the 3.42. (Ram has not released the full towing specifications for the 2019s as of this writing.)

For example, a 2018 6.7-liter Ram Crew Cab DRW longbed 4WD automatic can tow a maximum of 16,660 pounds when equipped with 3.42 axle ratios, while one with 3.73s can tow 18,660 pounds. If your trailer has an actual loaded weight of more than 14,000 pounds, I’d highly recommend getting the 3.73 axle ratio. The truck will get the load moving quicker and easier with the lower gearing, and will be a much better performer pulling the grades. By that I mean it would be less of a strain on the Cummins having the 3.73 gearing working for it than the 3.42s in high-load, high-demand situations.

When it comes to fuel economy, running empty around town or when driving where speeds are less than 55 mph, you’d see very little difference in fuel mileage between the two axle ratios because the transmission will never get the engine rpm high enough to be a factor. When towing, whatever gear keeps engine rpm between 1,800 and 2,000 rpm will give the best fuel mileage and power because that is the rpm window where the Cummins 6.7-liter makes peak torque. With a little time, you’ll find the engine’s “sweet spot” with the trailer you are towing.

The difference in towing mpg between the 3.42 and 3.73 gears at highway cruise speed, under the same conditions, should be less than 1 mpg because of the slightly higher rpm running 3.73s. Vehicle speed actually plays a bigger role in fuel economy than engine rpm. That’s because towing or unladen, mpg drops exponentially at speeds above 60 mph, which is when aerodynamic drag (Cd) really begins rearing its ugly head related to pickups.

That effect of Cd on fuel economy is magnified when you have the face of a tall trailer acting as a wall blocking the wind. If you are a numbers person, here’s the formula for aerodynamic drag: Cd = frontal area × drag coefficient (Cd) × air density × speed squared.

Note “speed squared.” At speeds less than 30 mph, overcoming rolling resistance (i.e., frictional drag) is what burns fuel. At highway speeds above 65 mph, aerodynamic drag takes over, accounting from half to more than two-thirds of the fuel that’s burned as the engine tries to overcome Cd, according to vehicle-manufacturer design engineers and wind-tunnel tests.

If you are really concerned about maximizing fuel economy, focus more on the right foot than on the right axle ratio. 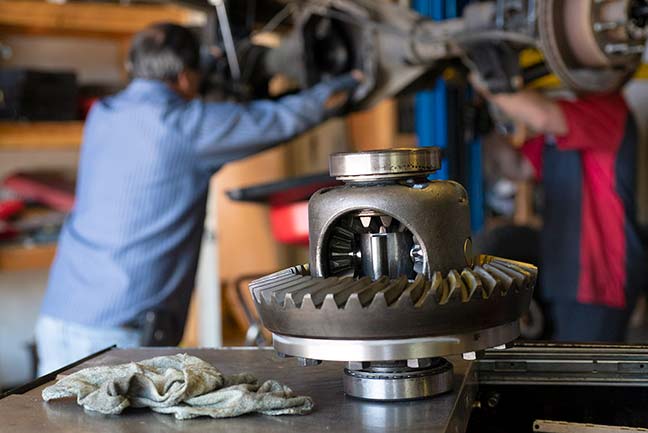 Axle-ratio selection plays a big role when it comes to towing trailers that are approaching the limit of a tow vehicle’s maximum tow rating. Choose 3.73 instead of 3.42 ratio in such situations because the “lower” (numerically higher) ratio will get the load moving easier and be a better performer in the mountains. Photo: Bruce W. Smith