With its feral ponies, white sands and good-old fashioned boardwalk fun, the mid-Atlantic shoreline of the Delmarva Peninsula delights visitors of all ages

“I realize that the concept of wild horses probably stirs romantic notions in many of you, but this is because you have never met any wild horses in person,” notes popular columnist Dave Barry. His words effectively sum up my first experience on Assateague Island (a 37-mile-long barrier island along the coasts of Maryland and Virginia) in 1980. We were honeymooning in a canvas tent, and we watched as two stallions reared on their hind legs and sparred with each other against the backdrop of a full moon. It would have been an incredible sight … if only we hadn’t been lying less than 3 feet away, looking up at them from our sleeping bags. Let’s just say it was the kind of the experience that makes you appreciate motorhomes.

We recently took an early fall trip back to Assateague in our Minnie Winnie, and while we enjoyed the ponies’ nocturnal visits from the comfort of our motorhome, we found that the Delmarva Peninsula today offers much more than wild horses. From Delaware’s Indian River Inlet to the Ocean City Boardwalk to the trendy shops and restaurants of small town Berlin, this stretch of mid-Atlantic shoreline offers something for every RVer.

Rather than Ferris wheels and midway games, this boardwalk on The Life of the Marsh Nature Trail in Assateague Island National Seashore offers the sights and sounds of the surrounding saltwater marshes.

We started our trip at the Delaware Seashore State Park, 29 miles north of the entrance to Assateague Island. Covering more than 2,800 acres, the park is bordered by the Atlantic Ocean and Indian River Bay and is home to north and south inlet campgrounds, the 1876 Indian River Life-Saving Station and Indian River Inlet Marina. This is a fisherman’s paradise: you can surf-cast from the beach, go deep-sea angling aboard one of the local charter boats, or fish from the campground’s seawall – though this last activity comes with a warning. My husband camped here as a child, and he has regaled me more than once with stories of sharks. Apparently, these aren’t just fish tales – a park ranger told us that just last week a camper had to fend one off when reeling in his catch.

One unique feature of Delaware Seashore State Park is the presence of two World War II “fire towers” designed to provide soldiers a 14-mile view of the coast and used to triangulate the firing of guns hidden in sand dunes and camouflaged in salt grass. The large-barreled guns were capable of shooting a 2,700-pound shell at enemy ships and submarines as far away as 25 miles. Visitors can learn more about the towers at the Fort Miles Historical Area in Cape Henlopen State Park, near Lewes, Delaware, 13 miles north of the inlet campground. 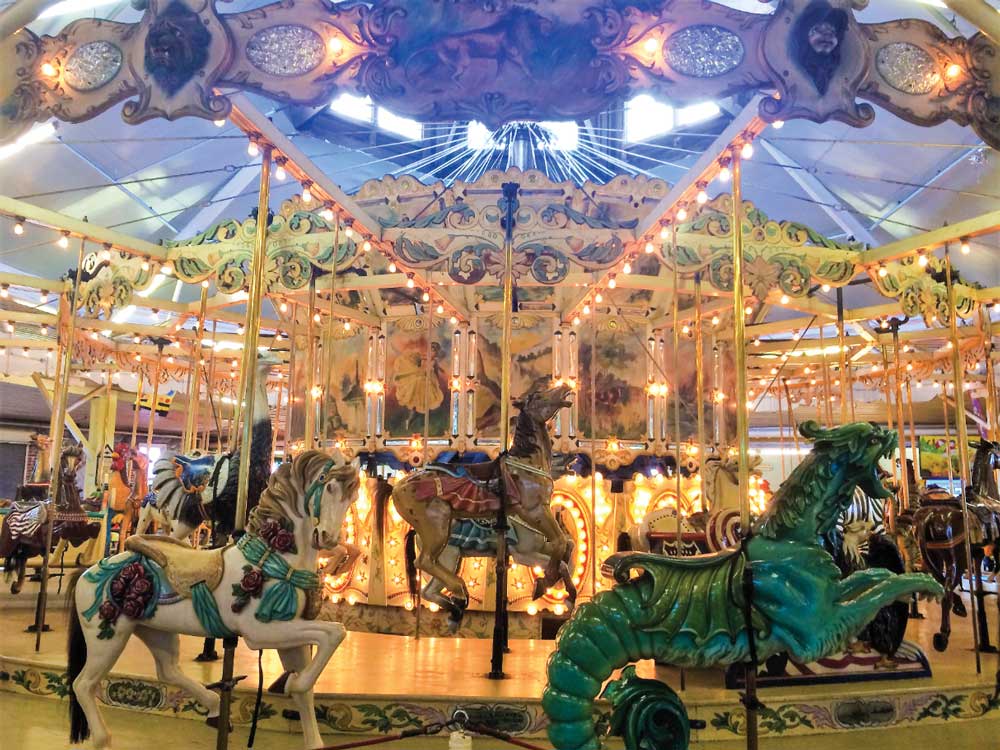 Just south of Delaware Seashore State Park is the restored 1859 Fenwick Island lighthouse. Open to the public on weekends, the site includes an 87-foot tower and a keeper’s residence staffed by local volunteers. Surrounded now by housing developments, gas stations and stores, it is fascinating to consider that more than a century ago the lighthouse sat alone on barren dunes. 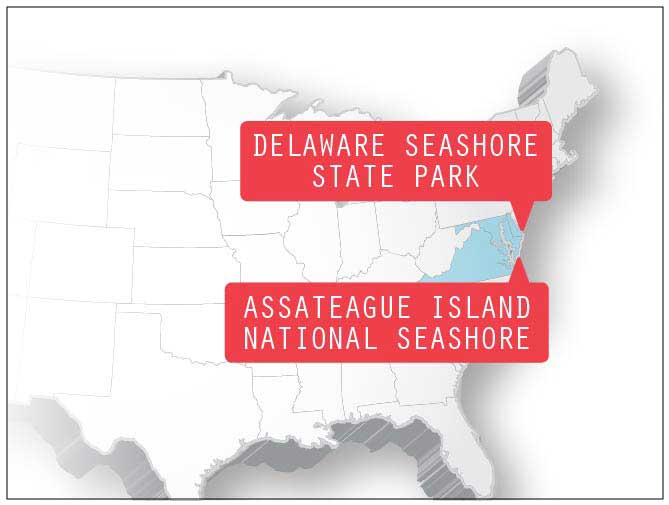 From Fenwick Island, Delaware, to the Assateague Island National Seashore is 18 miles, a drive that took us through Ocean City, Maryland. This once sleepy fishing town became a resort destination after a 1933 hurricane created an inlet separating Ocean City from Assateague. In the off-season it is a quiet town of 7,000 residents, but it receives about 8 million visitors annually, mostly during the summer months. Its most famous landmark is the Ocean City Boardwalk, 3 miles in length and featuring popular Maryland culinary delights like Thrasher’s French Fries (served with vinegar) and Dolle’s salt-water taffy and popcorn. It is home to the Ocean City Life-Saving Station Museum, with exhibits on local history, folklore and shipwrecks, as well as Trimper’s Rides, the boardwalk amusement arcade built by Daniel and Margaret Trimper at the beginning of the 20th century. Here we took a ride on the antique carousel, painstakingly restored to appear exactly as the ride did when it opened in 1912. We capped off our stop with lunch at Harrison’s Harbor Watch Restaurant, an Ocean City tradition with breathtaking inlet views, great crab cakes and a famous oyster stew.

Frontier Town is an iconic Wild West theme park reminiscent of the 1960s.

Assateague Island National Seashore may be just across the inlet from Ocean City, but it feels like a world away. While the boardwalk is all bright lights and bustle, Assateague is isolated and undeveloped. The island encompasses both Maryland and Virginia shoreline, with the northern two-thirds home to both a state and national park campground; miles of pristine, windswept beaches; unspoiled wetlands; and, of course, wild horses.

According to local folklore, the Assateague horses are descendants of the survivors of a shipwreck off the coast, though park brochures suggest the horses likely descended from domestic animals put on the island by mainland farmers to avoid livestock taxes and fencing laws. No hookups are available in either campground, but the state has newly renovated bathhouses with hot showers and flush toilets. There is little vegetation here and no shade, but the trade-off is a section of beach all to yourself. We brought kayaks, which we launched from the park boat ramp on Sinepuxent Bay. You can explore via the paved bike path or your off-road toad with an on-sand vehicle (OSV) permit.

Built in 1867, the Assateague Lighthouse stands 142 feet tall and is more than 27 feet in diameter at its base. The lights can be seen 19 miles out to sea.

If you are traveling with children, take a day and visit Frontier Town, a cowboy-themed amusement park 4 miles away. Opened in 1960, it features its original Wild West shows, along with a Lazy River water park, and High Ropes Adventure Park and Zip Lines. Frontier Town’s adjoining campground offers shady sites with full hookups and is a popular summer destination.

In addition to Assateague Island, our favorite stop on this trip was tiny Berlin, Maryland. A 15-minute drive from the National Seashore, this picturesque little town was the backdrop for the 1999 film “Runaway Bride.” Now a National Register Historic District, its Main Street features a variety of antique shops, cafÃ©s, a wine bar and an art gallery. During our visit we were treated to the sounds of a live jazz band from the porch of the Atlantic Hotel. It’s no wonder Berlin calls itself “America’s coolest small town.”

That night, we stood on the beach and watched as the sky darkened and filled with stars, and wild horses grazed nearby. A lot has changed since we first pitched our tent here more than 30 years ago, but on Assateague Island all that really matters has stayed – miraculously – the same. 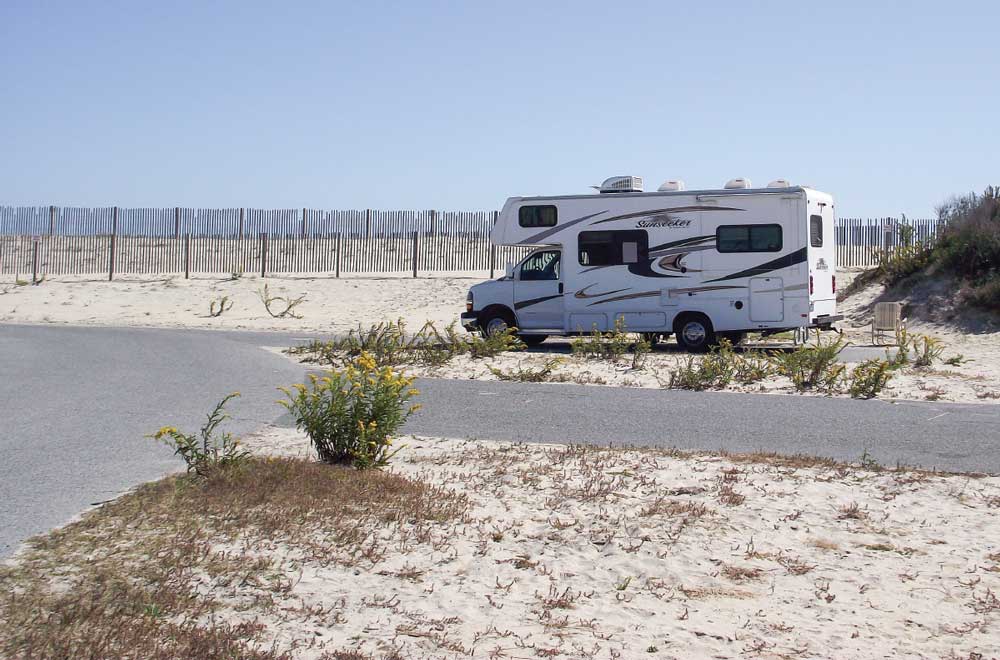 Campsites on Assateague back up against the dunes, just steps from the Atlantic.