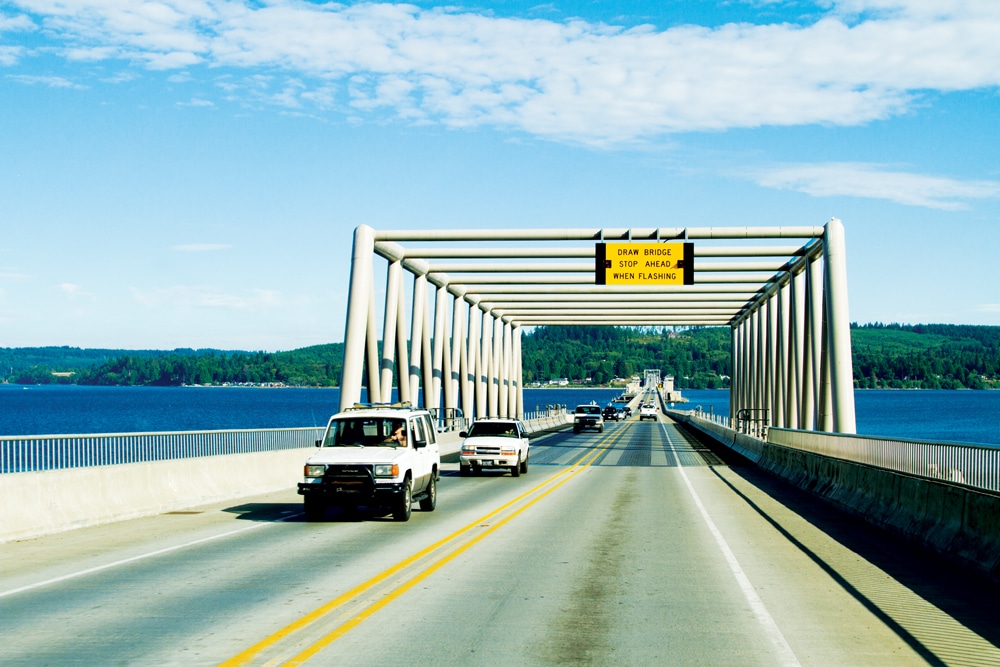 I love Washington’s Olympic Peninsula. It’s a big, green thumb of land bordered to the north by Puget Sound and the Strait of Juan de Fuca, to the west by the mighty Pacific Ocean and to the east by Hood Canal. It’s filled with temperate rainforests and near-desert “rain shadow” pockets, plenty of lakes and a dozen salmon-bearing rivers, luscious state parks, and even a national park. It’s also home to Hood Canal, one of only two fjords in the lower 48, and that’s what we’ve come to explore.
For us, a cruise up Hood Canal is just right for a long weekend. As usual, we leave Portland, Ore., later than we’d planned and, though it’s an easy trip north on Interstate 5, we don’t get into Hoodsport and the Glen Ayr Resort until nearly midnight. We pull into our gravel-topped, full hook-up site and feel grateful for the deep quiet that makes this park special.

The next morning, we wake to soft fog rising off the canal, but within an hour or so, the bright sun sparkles on the water. Glen Ayr is located across U.S. Highway 101 from Hood Canal. The RV park is behind the Glen Ayr hotel, so only a few of the sites have canal views. However, the spacious clubhouse, with its rock fireplace, large flat-screen TV, couches and pool table, offers guests killer views of the water. It’s also where we meet a group of caravaners munching on free cookies and drinking coffee. They’ve been driving the Hood Canal and staying at this RV park for years. “We love it at Glen Ayr because it’s so friendly,” one of the women told me.
I experience that neighborliness myself as I walk the puppies around the 36-site park. Everyone says hello and wants to pet the dogs. The caravan group is readying the barbecues in the covered outdoor pavilion. One of the members has just returned from Glen Ayr’s deep-water dock across the highway, his crab pot brimming with Dungeness crab. Because it’s private property, guests at the RV park don’t need a fishing license to catch these succulent crustaceans. The park even has an outdoor cooker where you can process your catch.

We want to explore all of Hood Canal, so we backtrack a bit on Highway 101 and turn off at State Highway 106. On a map, Hood Canal looks like a giant fishhook. It begins up by Port Gamble in the northeast and stretches 50 miles along Highway 101 to the town of Union. Here it makes a dogleg, called the “Big Bend,” and travels east toward Seattle for another 15 miles to Belfair.
Hood Canal got its name in 1792 from Lieutenant William Broughton, who was sailing with the expedition of Captain George Vancouver exploring the area. Broughton named the waterway Hood’s Channel in honor of Admiral Samuel Hood of the Royal Navy. However, he wrote “Hood Canal” on his sea chart and, even though this is a glacier-carved waterway, the name stuck.
This Big Bend part of the canal is largely farmland bordered by the Skokomish River. We come to Hunter Farms, a large farmstand and nursery. Hunter’s corn is a local favorite, so we load up on a few ears for later and spend a little time wandering the farm’s large glass greenhouses.

Back on the road, we’re amazed to see the quiet waters of the Skokomish thick with fishermen in waders angling for returning king and pink salmon. We pass into the Skokomish Indian Reservation where the Lucky Dog Casino is a favorite among gamblers. (Gaming is legal in Washington only on native reservations.)
The road winds along the canal, and we pass spectacular homes with million-dollar views clinging to hills above the shoreline. At the village of Belfair is Alderbrook Resort. While the resort doesn’t offer an RV park, the upscale property sits right on the canal and has some terrific dining options.

Back on the Skokomish Reservation on Highway 101, we stop at Patti’s Seafood, a little Native-owned stand that sells some of the freshest seafood in the area. Outside they’re washing off the boat that brought in the pristine king salmon this morning that Patty is offering at bargain prices. We rearrange the motorhome’s refrigerator to make room for a 6-pounder.
Heading north on 101, we pass by Potlatch State Park. On the canal side, the park features a day-use area right on the water that’s a perfect place for a picnic. Across the road, there’s an RV campground offering 35 big shady sites and a dump station.
Visiting many of Washington’s parks and natural areas requires a Discover Pass (www.discoverpass.wa.gov). The Discover Pass isn’t necessary if you’re a paid camper in the state parks. Visitors can buy a pass online ($30 annually; $10 daily), at parks or sporting goods stores or other retailers. Money from the Discover Pass helps the state keep parks and other sites maintained. It’s also not worth the $99 fine to get caught without one.
We stop at Hoodsport Winery, a small wine shop and tasting room that specializes in Washington wines, especially fruit wines. A husband and wife team own this wine shop and offer free fruit wine tastes and six tastes of other wines for $5. Since I’m driving, my friend samples and tells me the fruit varieties – especially the raspberry rhubarb – are tasty.

Hoodsport, one of a number of small towns strung along Hood Canal, boasts a second winery and some cute shops worth perusing. Because of the winding road and the villages, the average speed along the canal is 25-30 mph. But the life-in-the-slow-lane pace helps us appreciate the stunning views that seem to get more beautiful around every bend.

A few miles down the road, we stop at Hamma Hamma Oyster Co., a family-owned oyster grower that offers fresh oysters, clams, and other seafood. As we get out of the motorhome, the smell of smoke from oysters grilling on the barbecue envelops us. A friendly staffer offers us a sample, and it’s delicious – sweet, slightly briny, with a satisfying chewy texture.

Hood Canal’s Hamma Hamma Bay has some of the purest water in the world, making it perfect for growing oysters. After buying a few, we drive along the highway passing over the grassy channels of the Hamma Hamma River.
We’re entering the Hamma Hamma Recreation Area and the road has become more twisted with steep drop-offs to the water. While there aren’t places to pass, turnouts provide spots to let cars pass. We drive by Triton Cove State Park, another right-on-the-water day-use site, and Dosewallips State Park with 55 RV sites and great water views. On our next Hood Canal trip, one of these spectacular state parks would make a great place to camp.

My oyster snack has whet my appetite and, on the advice of a local, we pull into Halfway House Restaurant/RV Park, a landmark restaurant that’s been serving canal travelers for decades. The restaurant is owned by Bonnie Peterson, better known as the “pie lady of Brinnon.” We fill up on thick, tasty clam chowder and smoky, chargrilled burgers, but we save room for big slices of pie – coconut cream for me and flaky double-crust raspberry for my friend.
We’re more than full when we leave Halfway House, so we’re grateful the town’s visitors center told us about the hike to Rose Waterfall, a hidden gem just a few miles off the canal. The puppies are happy too, for the short, shady hike to this impressive cascade of water.

Back on the road, my companion reads in a guidebook that Hood Canal Bridge is the third-longest floating bridge in the world and the only one constructed on saltwater. Curious, at the town of Quilcene, we veer off and drive a few miles on State Highway 104 to the bridge. It’s worth the drive. This impressive bridge is an amazing 6,521 feet long and offers great views of the water.

On our return, we take State Highway 19 as it angles away from Hood Canal and into tiny Chimacum, a rural crossroads that boasts Chimacum Corner Farmstand. This little business, dedicated to celebrating the agricultural richness of the Olympic Peninsula, has become a community center and it’s a must-stop for people interested in local foods.

A few miles down the road, we stop at Finnriver Farm & Cidery. Finnriver specializes in producing organic hard apple cider, a refreshing, not-too-sweet elixir that captures the essence of apples.

Our final destination on motorhome cruise along Hood Canal is Port Townsend, a gem of a town that’s one of only three Victorian seaports in the United States. We motor into downtown, marveling at the multistory stone and brick Victorian buildings that line the waterfront. At the turn of the century, ambitious businessmen thought Port Townsend was destined to become the next major city. Instead, the railroad bypassed this seaport, leaving it a charming, frozen-in-time place with impressive Victorian homes and commercial buildings

We drive to the end of Water Street to Point Hudson Marina and RV Park, a 48-site park that’s right on the water next to the town’s public marina. Operated by the Port of Port Townsend, Point Hudson is a bustling place with rigs lined up shoulder-to-shoulder on sandy sites, many with great views of the water. While it’s not the quietest RV park, it does have utilities and great showers. It’s also super-convenient to restaurants like Doc’s Marina Grill, a few steps out our door, where I order delicious clams, salmon, cod and Penn Cove mussels in a savory broth for dinner.

From Point Hudson, it’s also an easy walk along the docks to downtown, where we visit the wonderful Northwest Maritime Center, dedicated to the art of making wooden boats, and the historic courthouse museum with its creepy subterranean jail cells. As we walk along the elevated dock, licking chocolate ice cream cones from Elevated Ice Cream and watching striped kingfishers dive for small fish, like the caravanning RVers we met earlier, we know we’ll be cruising the Hood Canal for years to come.