Crown of the Continent 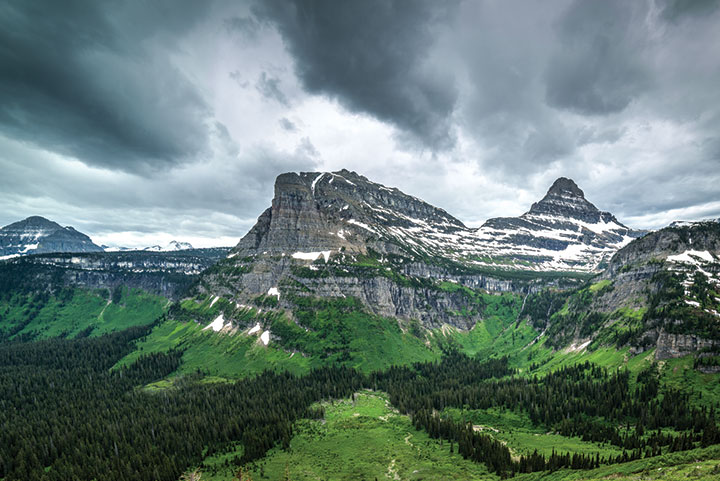 Glacier National Park is affectionately known as the “Crown of the Continent” and what a perfect nickname that is. Situated in the northern part of Montana, tucked up against the Canadian border, the spectacular park is filled with vivid blue alpine lakes backed by towering snowcapped mountain peaks. There is so much to see that even after three memorable visits, my husband, Mark, and I are still far from being able to say we’ve seen it all.

From hiking to canoeing to horseback riding, biking and boating, there are adventures aplenty. If you bring your passport and slip over the border into Canada, one of the finest jewels in the Parks Canada system, Waterton Lakes National Park, abuts the north side of Glacier National Park. These two parks are jointly referred to as Waterton-Glacier International Peace Park, and when they joined forces in 1932 they formed the first international park system of its kind, straddling a border between two countries.

Glacier National Park was created in 1910, and by 1915 a collection of lodges and chalets had been constructed in and around the park to house tourists arriving from the east on the Great Northern Railway. Lake McDonald Lodge, built from 1913 to 1914, is a pretty chalet surrounded by small log cabins on the shore of placid Lake McDonald.

Early one morning, we drove the 9-mile scenic drive that flanks the edge of this lake in hopes of seeing colorful skies as the sun rose over its glassy depths. The brilliant sunrise we’d hoped for arrived in muted shades of pale pink, but later in the morning, as we explored Apgar Village at the south end of the lake, marvelous storm clouds crept in. We walked out on the jetty and admired the gorgeous view before us as the distant jagged mountain peaks and their mirrored reflections were framed by the dark and gloomy sky.

Perhaps the most famous part of Glacier National Park is Going-to-the-Sun Road, which zigzags for 32 miles up the mountains from the main hub of the park at West Glacier to Logan Pass at a 6,646-foot elevation and then switchbacks for another 18 miles down to intimate St. Mary on the eastern edge of the park. The snowfall is so deep on this mountain pass that the road doesn’t usually open to vehicles until mid- to late-June. As we slowly made our way along this exquisite route, we were mesmerized by the U-shaped valleys surrounding us. Enormous basins ground out by the gradual motion of massive glaciers scraping the ground over the course of millions of years rose to sharp peaks on either side of us.

High up at the summit of Logan Pass, we hiked a short trail to Hidden Lake, where we suddenly came face to face with a mother mountain goat and her baby. Snow-white in color and sporting a small goatee and a pair of long horns, the mama moved through the grasses and bushes at a leisurely pace, her baby close behind, nibbling leaves as they went. To our delight, they ignored our quickly snapping camera shutters and seemed undisturbed by our presence. 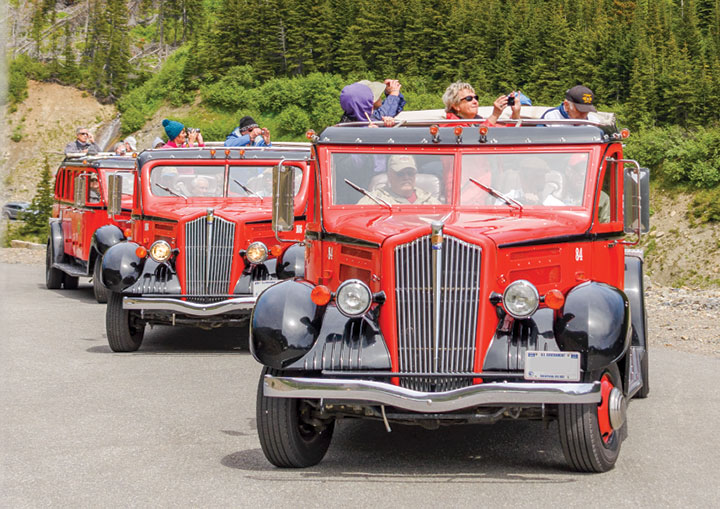 Thirty-three vintage red buses with their tops rolled back give tourists 360-degree views of Glacier National Park on Going-to-the-Sun Road.

As we traversed Going-to-the-Sun Road, we kept spotting the historic open-air red buses that have been escorting tourists through the park since the 1930s. With the tops of the buses rolled back, the passengers had unobstructed views of the scenery, and many were standing up taking photos in all directions. Even better, no one but the driver had to pay attention to the tight turns on the steep and narrow road. What a great way to go! We were astonished to learn later that this fleet of 33 lovingly maintained vintage buses is considered the oldest such fleet in the world.

While most visitors today begin their explorations at West Glacier where the larger and more family-oriented RV parks and amenities are located, we’ve found the eastern side of the park to be the most enchanting. Smaller RVs with fearless drivers willing to keep their eyes on the road can take Going-to-the-Sun Road through the middle of the park from west to east, but we prefer to tow our big fifth-wheel around the southern end of the park on U.S. Highway 2. Either way, each of the three main access points on the east side offers breathtaking beauty, as well as a glimpse of park life more than a century ago.

At St. Mary we hiked the flat and easy Beaver Pond Loop Trail through a meadow filled with colorful wildflowers to fabulous views of Lake St. Mary at a tiny, isolated gravel beach. At the end of the hike we came across the little log cabin that park rangers lived in during the early 1900s. With no roads and no stores in those days, it was a rugged and rustic summertime gig for rangers and their families.

A plaque near the cabin told a surprising tale of the first Glacier National Park Ranger, Chauncey (“Chance”) Beebe, who had left his wife and baby in the cabin while he went out on his normal hiking patrol for the day (he preferred hiking to horseback riding through the brush). His wife heard something rustling in the attic and then suddenly realized a mountain lion had climbed in through the upstairs window! Fortunately, the lion eventually left the house without harming her or their baby, but Chance was alarmed upon his return to find lion paw prints on the dusty attic floor.

Snowcapped Mountains and Soaking in the Sun

About 35 miles south of St. Mary we found another original national park log building at Two Medicine. Built in 1914 as the dining hall for guests staying at the Two Medicine Chalet Complex, today it serves as a camp store, bistro and tourist boutique gift shop. What a surprise it was to sip a delicious latte in such a remote location. A few steps away was a lovely gravel beach with park benches overlooking a sensational view of distant mountain peaks on the far side of Two Medicine Lake. Nearby, a collection of colorful rental canoes lay waiting for customers to paddle out on the lake. 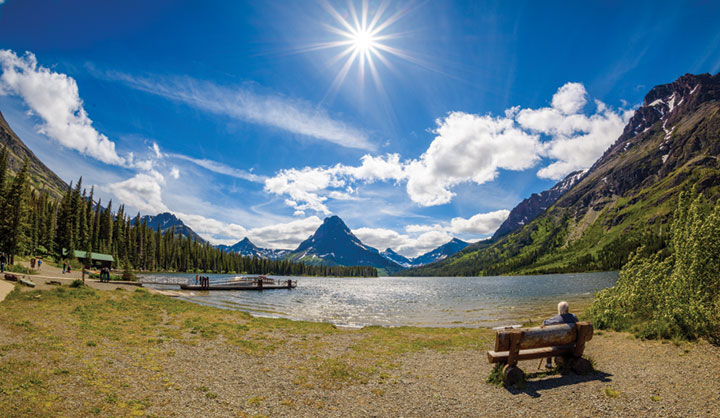 A park bench on the large gravel beach at Two Medicine is a great place to savor the view. Kayak rentals and boat rides get you out on the water. Photos by Emily and Mark Fagan.

Much as we loved St. Mary and Two Medicine, we were blown away by the dazzling views and mystical aura of Many Glacier at the northeast end of the park. When the magnificent Many Glacier Hotel appeared in front of us on the shore of glittering Swiftcurrent Lake, we couldn’t help but run down to the water’s edge to soak in the sun and admire the hotel’s elegant lines beneath the sharp snowcapped mountain peaks behind it.

Built from 1914 to 1915 as the showpiece of the Great Northern Railway’s lodges, the hotel resembles a classic yet grand Swiss chalet. For those seeking a chic dinner out with a million-dollar view, the hotel has a restaurant with huge windows overlooking the lake. Unfortunately, the restaurant hadn’t yet opened for the season during our visit, but a dinner there is on our list for next time.

Glacier National Park encompasses a massive 1,500 square miles within the joint Waterton-Glacier National Park system. A scenic 62-mile drive north of Many Glacier took us through the Chief Mountain border crossing into Alberta, Canada, and then on to the captivating but much smaller 200-square-mile Waterton Lakes National Park. What this park lacks in size it makes up for in pure magic. Playing host to just 400,000 visitors per year as compared to nearly 3 million at its southern neighbor, we found it much more intimate and cozy.

From the moment we looked down at a row of horseback riders on a trail high above aquamarine Upper Waterton Lake, we were hooked. In the distance the stately Prince of Wales Hotel presided over the lake from a perch high on a hill, truly resplendent in the afternoon sun. We had loved the historic buildings at Glacier National Park, but our first sighting of the Prince of Wales Hotel stopped us dead in our tracks. What a magnificent sight.

Built as a premium destination for Great Northern Railway clientele in 1926 and 1927, more than a decade after the construction of its southern log chalet counterparts, the Prince of Wales Hotel is genuinely princely in demeanor with steeply pitched roofs and carved railings on the wooden porches that frame almost every window. Inside we found a fantastic dining room with a wall of windows overlooking Upper Waterton Lake. Another wood-paneled room next door was filled with comfy chairs overlooking glorious views out yet another wall of ceiling-high picture windows. 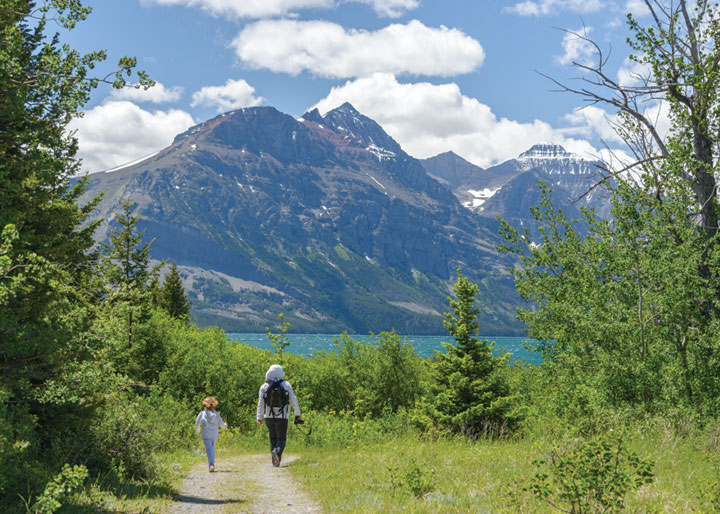 The Beaver Pond Loop Trail at Lake Mary takes hikers to the shore.

Beyond the Prince of Wales Hotel, sailboats, motorboats and kayaks cruised across the lake’s bright blue water, and a short walk down the hill took us to the small village of Waterton at the heart of the Waterton Lakes National Park. Unlike most national parks that have just a lodge or camp store at most, Waterton Lakes boasts a complete waterfront town, and we were astonished to find one part of the village was a beautiful campground snuggled up against the shore with campsites lining the water’s edge. Everything is within walking distance, and we spent many a happy hour exploring the inviting bistros and tourist shops along the village streets. There was even a small movie theater, ideal for a matinee when the weather took a turn for the worse.

We soon discovered that along with human visitors from all over the world, the town of Waterton plays host to a resident herd of deer. We caught them lazily lying around all over the place, little furry brown mounds with fuzzy antlers snoozing the mornings away on any green lawn that was available. In the afternoons they’d visit the picnic area and wander from table to table to see what everyone was having for lunch. As they stuck their noses into everyone’s business, we couldn’t help but laugh, and kids and parents got a huge kick out of these uninvited guests.

A paved bike path goes all through the main part of Waterton Lakes National Park, and we rode our bikes everywhere on it. The views were out of this world in every direction as the bike path rose and fell through the hills. How fun it was to see a sign painted on the ground before an intersection in Canada’s two official languages, English and French: “Slow … Lentement.” 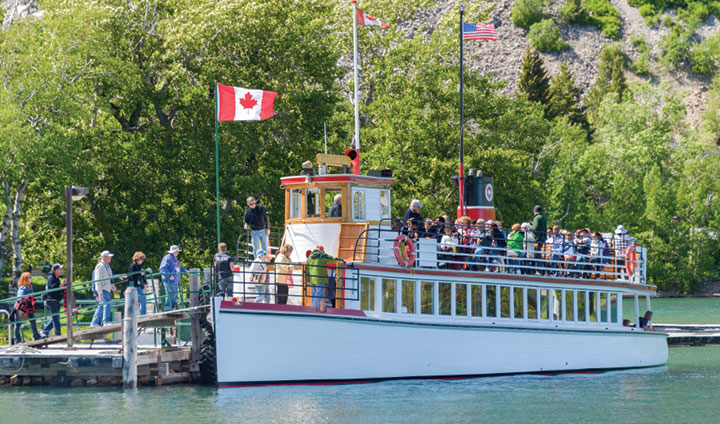 The Waterton Shoreline Cruise aboard the M/V International sails across the border between Alberta, Canada, and Montana.

The highlight of our trip to Waterton Lakes was the Waterton Shoreline Cruise aboard the historic M/V International, a tourist boat that has been taking visitors on Upper Waterton Lake across the international border to Glacier National Park in Montana since 1927. We sat outside on the upper deck of the boat in the sunshine and watched the awe-inspiring mountain landscapes glide by. After crossing the border to the United States, visible only as a thin line in the woods on either side of us, we docked at tiny Goat Haunt and got off the boat for a brief walk on the shore. Some folks hiked back to the village of Waterton (a passport and border security clearance is required to do that), but we decided to enjoy a smooth and scenic sail back to town instead.

With each return visit, we find that Glacier and Waterton Lakes National Parks work their way deeper into our hearts. We’re certain they will find a special place in yours, too.