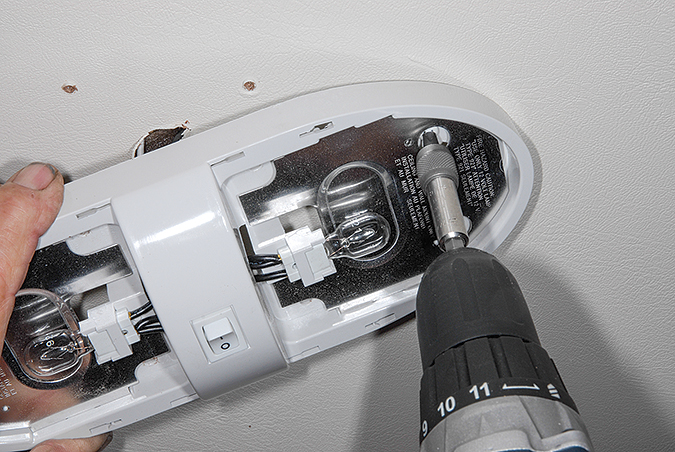 Lighting the interior of an RV used to be a fairly boring subject. Incandescent fixtures were the norm, with a smattering of halogen bulbs used for more brilliant lighting and fluorescent tubes reserved for those who conserved amp hours. All three types of lighting played useful roles, but LEDs are now the rage, and with prices coming down, efficiency going up and the market flooded with a variety of products designed for just about any purpose, illuminating the inside of an RV has become a lot more interesting.

The stock incandescent fixture is
removed from the ceiling, which will expose the wires.

Double-bulb incandescent fixtures mounted on the ceiling are commonly used in RVs, and depending on your sensitivity to décor elements, may detract from the interior aesthetics. Flush-mounted ceiling lights look best, but cutting holes and recessing replacement fixtures can be a big job. A nice alternative is a low-profile LED lighting fixture offered by Command Electronics.
The Command oval surface-mount 22-LED light is only ¾-inch deep and, with its smooth lines, simulates recessed lighting when mounted on the ceiling. These fixtures are also practical for use under cabinets, in closets and in storage compartments. A hidden on/off switch is activated by pressing the icon embossed in the lens, which allows the fixtures to be controlled independently or via a master switch, making them very versatile when balancing the lighting inside any RV.
While incandescent fixtures are rather bulky, they do provide lighting that looks warm and inviting; LEDs tend to go the opposite direction. What sold us on the Command lights was the 3,300-Kelvin warm-white color, which is much less harsh than those LEDs that emit daylight hues. They also deliver 650 lumens of lighting from 22 LEDs, drawing only 0.6 amps, which means a lot of light for little power. And the Command LEDs are dimmable when used with an optional wall switch, operating between 9 and 30 volts DC.

Once the wires are
connected, the new LED fixture is attached
to the ceiling, easily covering the original hole for routing the wires. The new fixture has 22 LEDs and a hidden switch.

We replaced all 14 incandescent fixtures in a fifth-wheel with the Command LEDs, giving the ceiling a more integrated look while improving the lighting dramatically. There were no hot spots — just evenly distributed lighting that brightened up the interior, which in this case, was inherently dark because of heavy use of dark cabinetry, furniture and flooring and a lack of windows on one side of the rig.
Installing the LED fixtures was simple, requiring no modifications. The original fixtures were unscrewed from the ceiling, and the wire leads were cut and identified for polarity using a multimeter. The wires were then connected using crimp-style terminals, and the fixtures screwed on to the ceiling.
We had only two minor hiccups during the installation process. One was figuring out how to cover two screw holes left by the old fixtures that were outside the 8.15- x 4.8-inch dimensions of the Command housings. We settled on small screws and caps to fill the holes. The other required rotating a couple of the lenses because a protrusion in the molding was depressing the switch.
The Command surface-mount LED ceiling lights have a $34.95 MSRP and come in white or black. Command LED fixtures are made in the USA.
Command Electronics | 269-679-4011 | www.commandelectronics.com