As with most things in life, there’s more than one point of entry into the RVing lifestyle, and there are most certainly divergent paths within it. While some may be looking for a way to adjust slowly to RV ownership or downsize what they already have, others are searching for a trail that goes deeper into the woods, so to speak.

Perhaps you’ve been on the road and now want more comfort and amenities for longer, farther treks. Maybe you’d like a prime central gathering place for your family and camping companions. Or maybe the phrase “roughing it” is simply not in your lexicon and you’d like an RV that reflects that. The 2018 Coachmen Chaparral 381RD showed it’ll fit the bill for any of those scenarios.

The 381RD is a five-slide fifth-wheel with two slideouts in the living room and one each in the kitchen, dining area and bedroom. This 42-foot, 10-inch model is a mid-profile unit, the largest of three Chaparral segments, in front of the Lites and X-Lites. We’ve seen plenty of large and deluxe RVs, and just because one has plenty of space doesn’t mean it’s been properly maximized — but here, every inch is used well. 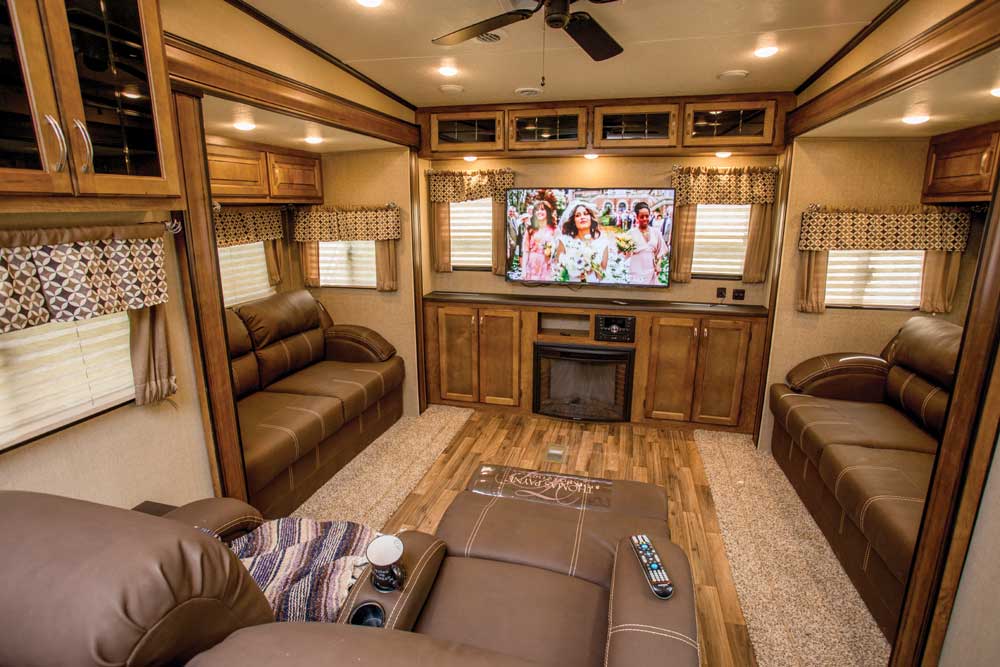 Opposing slideouts and reclining theater seats make the living room a great place to entertain a crowd or just kick back for some quiet time, with an abundance of natural light via plentiful windows.

One feature that stands out is the bathroom, which is still fully accessible with all the slideouts retracted, an attribute that should be present in every RV made. Having your own bathroom to use in lieu of public restrooms is one of the major benefits of owning an RV, so you should be able to utilize it at any pit stop.

Once we opened the slideouts, extended the electric awning (with an LED light strip), and deployed the electric front jacks and rear stabilizers, the rest of the hookup procedure was augmented by a conveniently condensed LED-lit command center where there are two 120-volt AC outlets, cable and satellite hookups, freshwater hookup, tank-flush levers, winterization and tank-fill connections, an outdoor hot-and-cold shower and more.

Inside, there’s an abundance of natural light through the numerous windows — 13, to be precise, plus three more in the bedroom. It’s a task to open and close all those shades, so you have to decide whether letting in all that light is worth it. My answer is always yes. I would rather have the option of keeping some closed if I didn’t want to go to the trouble but throw everything open on the days I want all the light I can get. All those windows also offer a nice cross-breeze, and if you’re in a scenic area, you get a great all-around view. 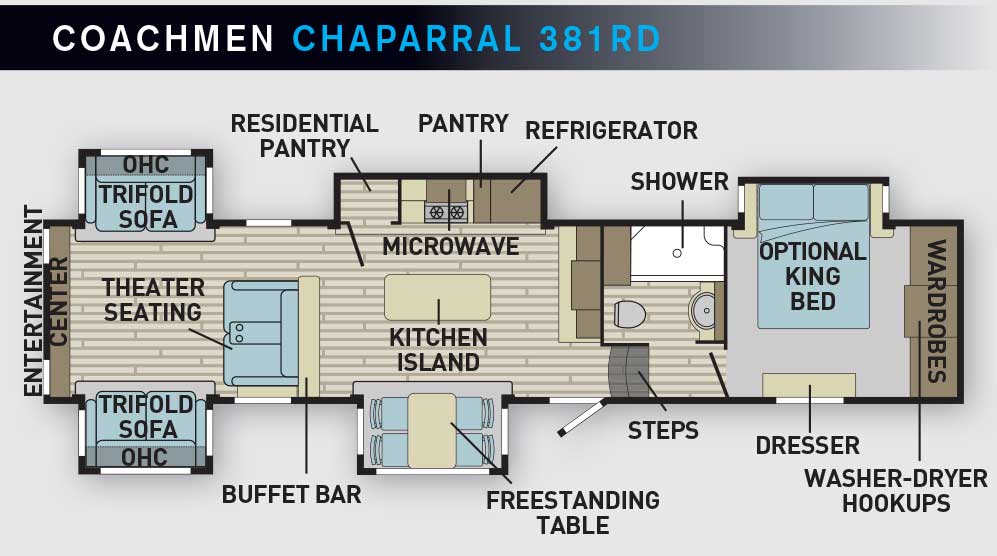 At night, you’re still good to go; there are plenty of recessed LED ceiling lights, and they’re segmented nicely so you can pick and choose which areas to illuminate. The switches are even located close to the lights they control — a revolutionary concept, right? — so you don’t have to operate them all from the central control panel just inside the entry door. You can actually be sitting on the sofa and reach up to switch the lights above it. It would be nice to have softer light options in the living room, but at least there was the optional electric fireplace, whose flickering-flame lights and hot-air blower can be run separately or simultaneously.

The accoutrements and Brindle decor made for a very pleasant atmosphere with warm wood tones, flooring and fabrics, as well as the elegant touch of darker accents, such as the freestanding dining table and chairs, and barstools throughout the kitchen — and, oh, what a kitchen! Come with me, friends, while I wax poetic.

I sing of the plentiful cabinet space, both up and down, surrounding the stove and sink. Upper cabinets featured tinted cross-patterned glass, and while I usually dislike glass cabinets, it’s dark enough to keep the contents (and the messiness thereof) mostly a mystery. Behold the pop-open dish-brush drawer just beneath the sink, and the wine-bottle space next to the microwave. See the vertical-pull drawer with a kitchen-size trash can in it, ready to be bagged. Room for a trash can, even a small one, is a critical element that too many RVs mysteriously lack.

There’s a glorious pantry, too, with a bright LED light and a tinted-glass door behind which lipped shelves and slide-out drawers reside; the bottom drawer is sectioned to keep plates and other breakables secure during travel. The optional 14.7-cubic-foot Haier residential refrigerator has double doors with two freezer drawers below.

The “Kitchen Island of Paradise” is the most functional one I’ve ever seen in an RV. It’s a great size for counter space and storage with three slide-out drawers, including one that’s deep enough for pots and pans, all enclosed by a cabinet front for a tidy look. There’s even a bar space at the end with two curved-seat cushioned stools, and an outlet for appliances or a laptop if you choose to do non-edible work there. Mosaic-tile pendant lights over the island add illumination and style.

Optional solid-surface countertops grace the island and kitchen work areas. There are matching-material covers for the deep double stainless-steel sink, which features an arched spout-or-spray faucet. Over the sink there’s an under-cabinet light, and behind it is a dark-wood accent wall that matches the island. It’s a lovely choice, as it adds interest and texture without being overly busy. The same can be said for the faux-stone backsplash behind the 30-inch microwave and stove area, which has nice side counter space for utensils or small appliances that can be plugged into the electrical outlet there. The folding-glass cover for the three-burner gas cooktop provides for even more workspace. 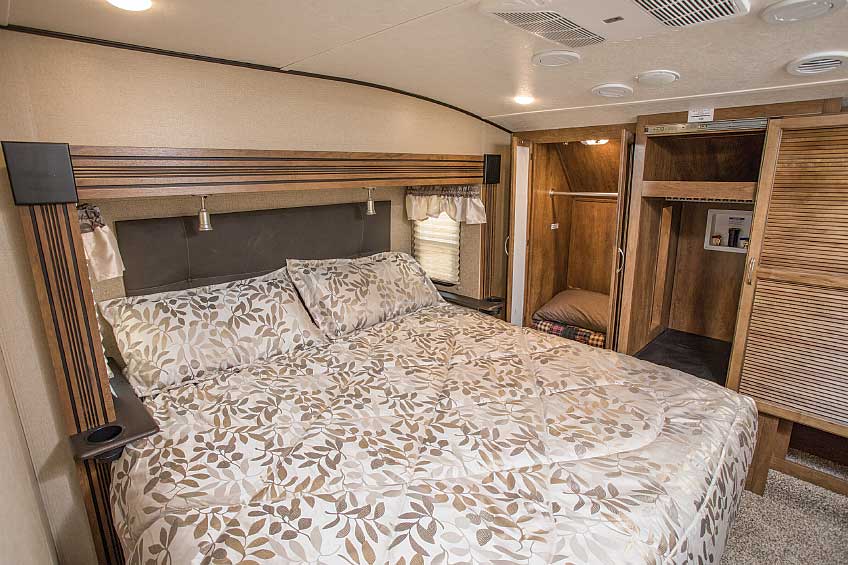 Spacious hanging wardrobes, a cabinet with washer-dryer hookups and an optional king-size bed in a slideout grace the Chaparral 381RD’s bedroom.

Next to that beautiful kitchen, for which I still have cartoon hearts streaming from my eyes, there’s a bar facing the living area with two more of those cushioned stools and another cabinet on the side. The living room itself is well-appointed and comfortable, with a ceiling fan and more of those tinted-glass cabinets. Three-seat sofas bookend the living room, albeit with no side tables for either, and two optional theater-seat recliners with cupholders in the center were a great vantage point from which to watch the optional 50-inch TV. While they sit up against the bar, they’re not anchored to the floor, so you can scoot them forward and recline without the bar being a hindrance — although short-clearance seat backs would be a preference. There’s even a little ledge between the wall and theater seats with an electrical/USB outlet at the back. Add in that Ultraleather finish, and you have prime movie-viewing spots.

The 381RD looked great so far, but I still had to determine functionality. The real test came one dark and stormy night when our group’s usual picnic-table potluck was rained out and we had to relocate. With our large party, my digs were naturally declared the shelter of choice, so the eight of us piled in. As everyone gravitated toward their area of work and interest, I took notes on how well the Chaparral accommodated them all. 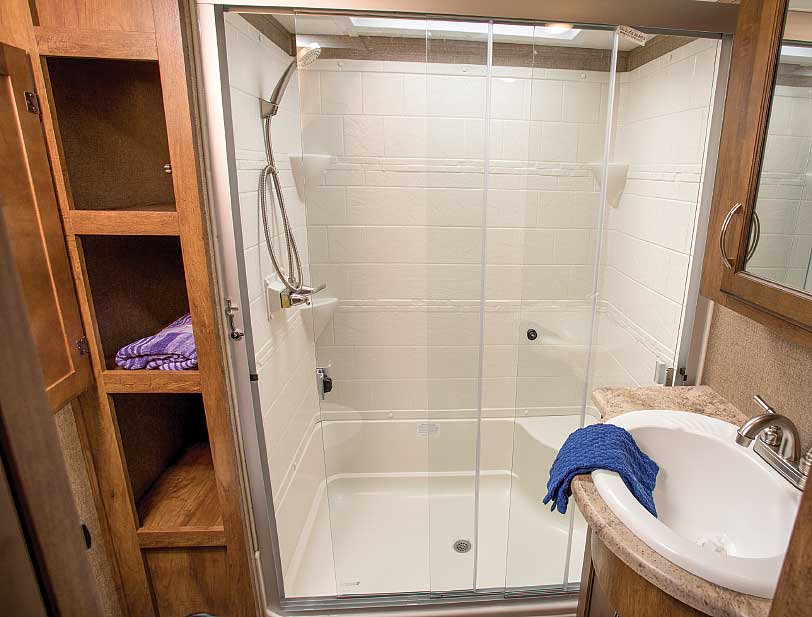 A skylight and a white molded shower liner with a corner seat give the bathroom a spa-like feel. It has deep cabinets and under-sink storage, and is accessible even with all slides retracted.

In the kitchen, a few people got to work with a flurry of dinner preparations. The stovetop was put into use, vegetables were washed in the sink, and there was general prep and assembly on the island. The others found their way to seats at the bar and in the living room. They flipped through the many channels available through the King Jack over-the-air HDTV antenna and cable-TV hookup, taking particular enjoyment from those recliners. I received all thumbs-up comments from both factions, with one exception: When people in the recliners are conversing with people seated on the curbside sofa, the slideout corner can obstruct their view of each other. One of the best features, to my mind, was that, once dinner was served, every one of us had tabletop seating, between the four dinette chairs and the four barstools. Not one person had to balance a plate on their lap. That’s a significant feat in any RV, even one as large as this. Someone thought that out, and we appreciated it.

Between the solid-surface counters, island and bar and the freestanding dinette, there’s ample space in the kitchen for food prep and other activities, including dining seating for eight.

Once the rain abated and everyone excused themselves quite some time later — a sweet courtesy, after catching me rubbing my eyes — I was left to explore the 381RD’s bedroom and bathroom. The front bedroom has a large center sliding-door cabinet with washer-dryer hookups, flanked by two lighted wardrobes with double mirrored doors, hanging rods inside and drawers underneath. There’s also a floor dresser on the curbside wall with an electrical/USB outlet. The bed has ledges with cupholders and power outlets on both sides, which I loved, unlike the optional king-size mattress. It’s described as “pillow-top” but, of course, everything is relative in RV-speak, so it was still maybe just 5 inches tall and had very little give, and it wasn’t as comfortable as I’d hoped.

Use of the bathroom, though, was a joy. RV bathrooms are a necessity for which I’ve never minded cutting corners. But in the Chaparral, I didn’t feel like I was sacrificing anything. To the contrary, I felt a bit spoiled. Again, the storage is plentiful with a medicine cabinet, under-sink storage and deep cabinets for linens. The shower is roomy, light and bright with its white molded stone-pattern liner, which lent itself to a spa-like feel with the skylight overhead. It has a corner seat and tripane-glass sliding doors that seal perfectly in the tracks so no water escapes. I did wish there was more light in the shower; the skylight helps for daytime use, but at night it’s pretty dim in there. The sink here is also solid-surface, with a good amount of counter space and a power outlet.

The numerous cabinets and large lighted pantry provide plenty of storage, even for fragile dishware.

Have I conveyed yet just how much utility and space there is in the Chaparral 381RD? While this fifth-wheel is a monster in look and feel, in a good way, it doesn’t tow like one, thanks to a few key elements, such as the Dexter E-Z Flex rubber equalizer suspension and the aerodynamic Turn-Tec front-cap design, which has a 90-degree turning radius and allows towing by many 6-foot-bed trucks.

There’s a weight advantage, too, with the Azdel-composite-backed side walls. Azdel is 50 percent lighter than wood and impervious to mildew, rot and mold. Since it is void of moisture, it virtually eliminates delamination. This is a huge plus in my book.

If you’re looking to upsize your life on the road in a smart way, take a look at the Coachmen Chaparral 381RD. Considering all the thought put into both its construction and design, it’s pretty clear that this fiver is the whole package.