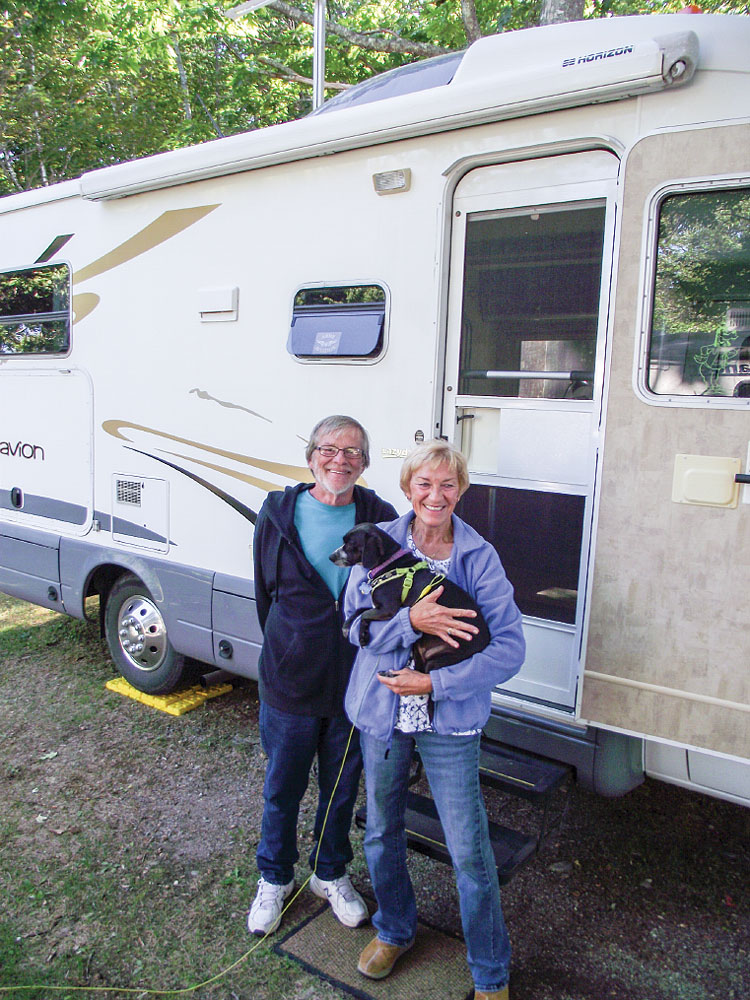 This article is one in a continuing series demonstrating that some motorhomes, like fine wines, really do get better with age. They may have miles under their wheels, but these motorhomes can still make dreams come true. That is why each one has earned the right to be called “the classic ride.”

If there is one sentence that could sum up the major shift in motorhome design in the last 20 years, it might be “Good things come in small packages.” The movement toward more compact touring units began back in the 1990s with motorhomes like the Winnebago Rialta (“Rialta Reality,” October 2016). It came of age a decade later with the production of sleek, well-equipped motorhomes like the Itasca Navion. With the power and reliability of a turbodiesel engine and a focus on providing the quality, workmanship and creature comforts of a full-sized motorhome, the Navion 23J was designed with a new generation of buyers in mind.

That was in 2006. Now one of these decade-old units on the used market is an excellent – and economical – choice for first-time buyers like Jim Altoft and his wife, Kyle Wixson, who have found their 23J to be a perfect introduction to the RV lifestyle.

“A Class A just seemed too big, too much like a bus,” Wixson says.

Altoft was a reluctant sell on buying a motorhome at all. The couple had recently retired and already had homes in New York and Florida, and he just wasn’t sure they had room in their lives for an RV. Wixson, who had grown up traveling and wanted to make the most of their new free time, made the decision for them.

“I got up one day and said, ‘We’re going shopping,’” she laughed.

They decided that a pre-owned motorhome was the best choice since they were really “trying out” the whole concept of RV travel, and they were drawn to Class C’s because both felt the truck-like design would help them more easily make the transition to driving a motorhome. That was three years ago, and having witnessed the wildly fluctuating fuel prices of the past, they were looking for something that got reasonable fuel economy. This led them to consider a diesel, which Altoft felt was a better choice in terms of power, fuel consumption and longevity. Their only other criteria? A motorhome that was well-maintained and had a dedicated bed.

The couple found the Navion on their first visit to a local dealership. Made by Winnebago Industries under the Itasca badge, the motorhome has steel and aluminum framing, interlocking joints, patented Thermo-Panel side walls and a one-piece crowned fiberglass roof. Built on a Sprinter chassis, its Mercedes-Benz five-cylinder, 2.7-liter turbodiesel engine boasts 17-19 mpg, and had just over 40,000 miles on the odometer. The unit has a five-speed transmission, four-wheel ABS disc brakes and independent front suspension, all of which promised the comfortable handling the couple was seeking. While they were impressed with what they found under the hood, they were also pleasantly surprised by the interior. 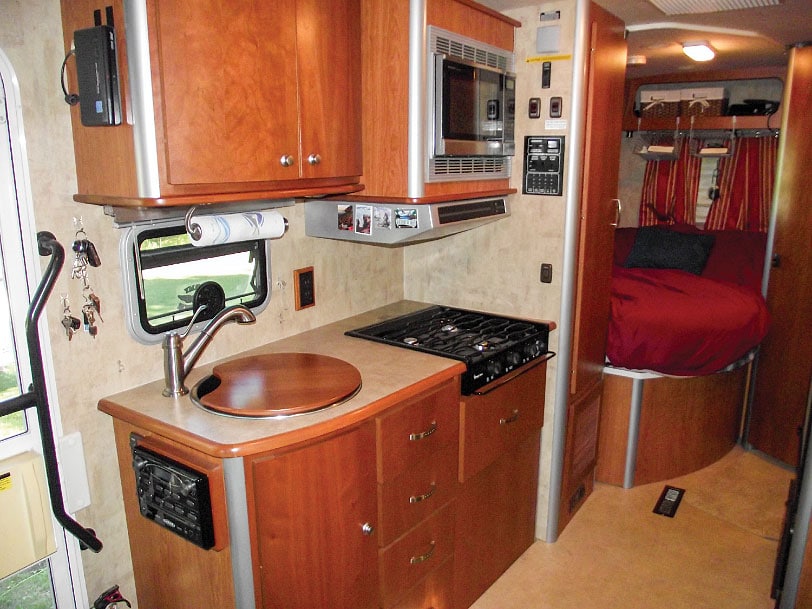 Altoft and Wixson knew there would be trade-offs when choosing a smaller motorhome, so they were excited to find that the Navion included a driver’s-side slideout in the dinette area. Along with swiveling driver and passenger seats, this provided ample room, making the interior feel open and uncrowded. The galley is fully equipped with a three-burner LP-gas stove, stainless-steel range hood, stainless-steel convection microwave and a large stainless-steel paneled two-door Norcold refrigerator. The rear bath is split, with the sink open to the bedroom while the shower and toilet are enclosed in the aft corner, a feature they both liked. Systems include an Onan 3.6-kW generator; a roof-mount air conditioner with heat pump; an LP-gas furnace; and 34-gallon freshwater, 31-gallon black-water and 38-gallon gray-water tanks.

In terms of dÃ©cor, the color scheme of the Navion is muted, with light-gray carpet, sand tile and counter­tops, and a maroon-and-brown print upholstery. The honey-cherry finish of the cabinetry and the molding framing the slideout gives the cabin a rich look that’s somewhat uncommon for a small Class C. The couple remains impressed by the interior workmanship, pointing out that some of the other units they saw seemed cheaply made by comparison.

“We just felt like everything was built to a high-quality level,” Altoft says. “The cabinetry, the woodwork, furniture all looked more high-end, well-made.”

One of the final selling points for the Navion was the storage space. There are fully extending sliding drawers in the galley, and this model also includes cabinets over the cab in place of a bunk.

“There is literally tons of storage up there,” Wixson notes, adding that there is also pass-through storage under the rear bedroom. And yes, there is even a standard dedicated 49-by-75-inch corner bed.

The list price of the Navion in 2007 was $87,988. They bought the 6-year-old 23J for $54,000, certain that it was a sound motorhome but still not certain how or even if their new addition would fit into their life. The answer to that question was clear when we met Altoft and Wixson early last fall in a campground in Bar Harbor, Maine.

“We’re on the road a lot,” Altoft says with a smile, recounting one westward trip that included the Grand Canyon, Mount Rushmore, Salt Lake City, Yellowstone and the Grand Tetons.

In addition to longer trips, the couple also uses the Navion to move between their winter and summer homes, with sightseeing excursions along the way. They move so much that Altoft says they seldom are in one place long enough to even put out the awning.

“There’s just so much we want to see. We make all these plans!” Wixson laughs.

Now that they have put another 20,000 miles under the wheels, are they content with their “starter” RV?

“We’ve realized we’d really like another 4 feet,” Wixson admits, though they both agree that adding length would also mean losing some of the benefits the Navion offers.

Their main complaints have to do with the space around the rear bed. Because of its tight corner location, they have found it is actually easier to open the exterior side storage area – which allows direct access to the side of the mattress – in order to make the bed. They have also found the under-bed storage area, which is accessed by lifting the mattress, to be difficult to use. One modification they are considering is putting cabinet doors on the bed’s base that would be easier to open. A modification they have made is adding a curtain between the rear bedroom and the main living area for increased privacy. Still, these are small things, and they are outweighed by the motorhome’s dependability. Thus far, except for routine maintenance, the only thing that has needed service was the generator. In that case, bees had built a hive inside, and once the bees were removed, everything worked perfectly.

The couple did find that, even with the Navion’s smaller size and ease of handling, constantly breaking camp to go off and sightsee was a bit of a nuisance. Since the Navion is equipped to tow up to 3,500 pounds, they added a Chevrolet Tracker to their caravan. They had just returned from Acadia National Park in their dinghy and appreciated the convenience a second vehicle could offer.

Sitting in the cool shade of the trees overlooking the water, Altoft agreed that Wixson had made the right decision when she told him it was time to pick out an RV.

“I would definitely recommend it,” he says with a twinkle in his eye. As for the Navion, with 60,000 miles on the engine, he adds, “It’s barely broken in.”

In the Itasca Navion, combining diesel power with modern trends in design and construction, yesterday’s innovation has become an affordable gateway to the RV dream, and today’s – and tomorrow’s – classic ride. 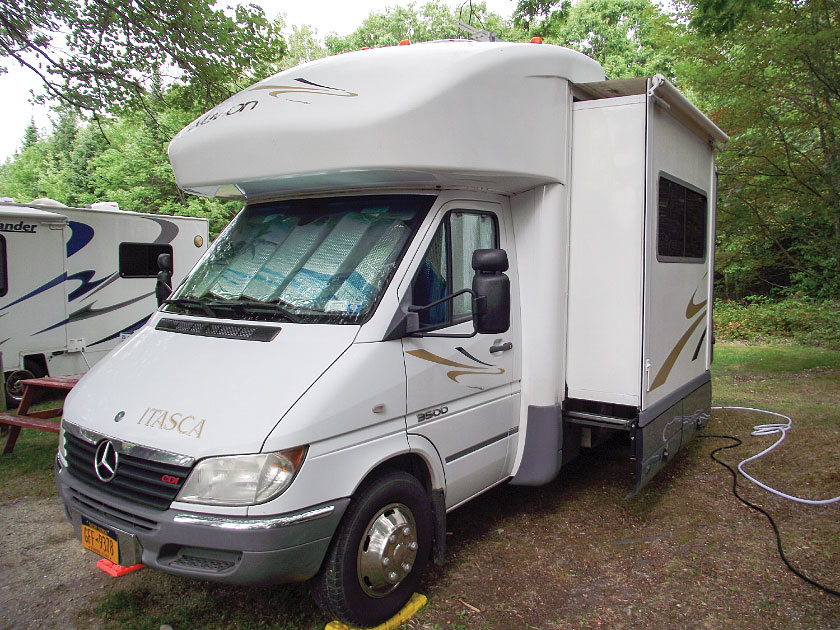 The 2007 Itasca Navion 23J is built on the Sprinter chassis and offers a single driver’s side slideout to help expand the dining area.

One advantage to any model that has been produced for a decade or more is the ability to research its track record and to find support and advice from owner’s groups. As with all used motorhomes, condition is a significant factor in price. A 2007 Itasca Navion 23J can be found on the used market for as little as $36,400 to as much as $55,000, with the average selling price hovering just under $44,000. Compare this to the new 2017 24J (now equipped with two slideouts) with a base MSRP of $115,244.