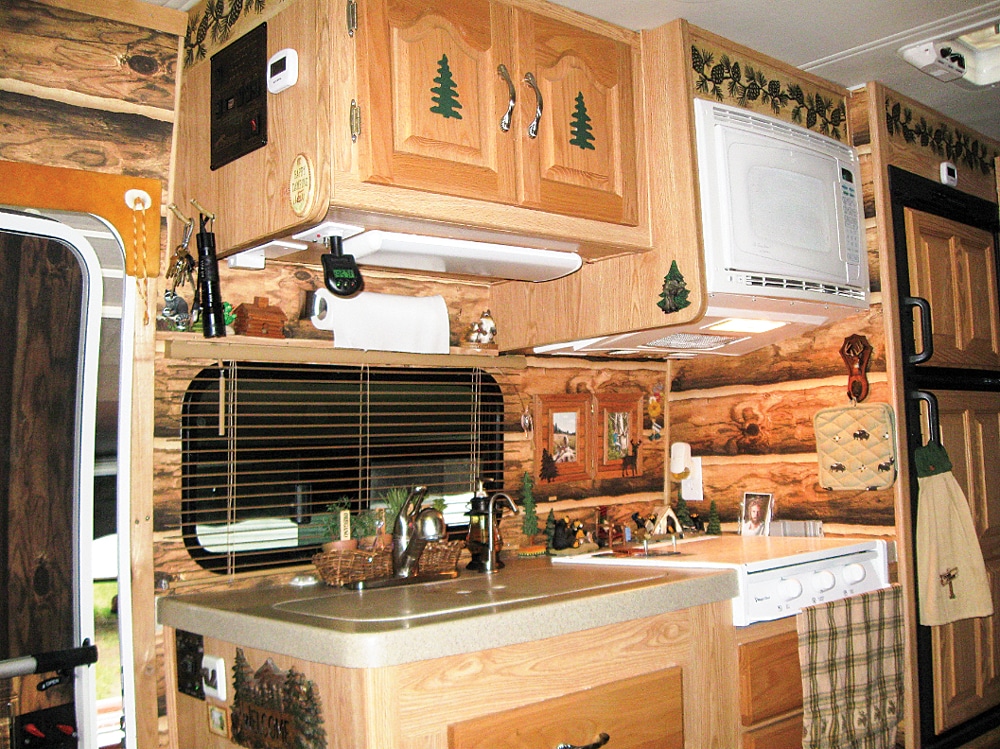 This article is part of a continuing series looking at motorhomes that have stood the test of time. What these units may lack in the latest technology they make up for with their definitive style and the innovative modifications of their dedicated owners. They may have miles under their wheels, but they can still make dreams come true. Each has earned the right to be called “the classic ride.”

A motorhome is a kind of escape pod. We turn the key and we are transported to faraway places that are starkly different from our everyday lives. But what if you didn’t need to burn a single gallon of gas to get away? Imagine a motorhome that is a vacation destination in and of itself, with an interior so unique that you might forget where you are, even if you are still parked in your own driveway. If that sounds impossible, meet Michael and Barbara Wemple (Mikey and Barbi to us) and step inside their one-of-a-kind log cabin conversion of a 2005 Coachmen Concord. I promise – you have never seen anything like it.

This log cabin makeover is all in the details. From the evergreens on the cabinet doors to the pinecone wallpaper inlay of the kitchen.

From the arrows hanging over the leather headboard to the bear rug and moose toilet seat in the bathroom, this motorhome bears no resemblance to the one the Wemples drove home from the dealer’s lot a dozen years ago. That was the fall of 2005, and the couple was just starting the search for a new motorhome. In their 50s and still working, they wanted something to use for weekends and vacations with an eye toward more extended travel when they retired. After doing some online research, they narrowed their search to the Concord 275, citing the ease of driving and handling a Class C and the Coachmen’s streamlined appearance as factors in their choice. They also liked the Concord’s layout, including the bedroom slideout, the big back window, and the fact that this unit, unlike many others in that size range, did not sacrifice the dinette for a couch. They had also been dissatisfied with the storage capacity of comparable models, which Michael notes “was pretty minimal.” They tracked down two dealers in Denver that had the 275 DS in stock and took a road trip from their home in Montana to get a close-up look.

Michael and Barbara Wemple oved the exterior appearance of the Concord, but knew an interior makeover was a must.

As soon as they saw it, the Wemples knew that the Concord was exactly what they were looking for, except for one thing – the factory dÃ©cor.

“We were not at all crazy about the inside,” Barbara says emphatically.

Still, the couple got what Michael calls “a smokin’ hot deal,” paying $23,000 less than the Concord’s $75,000 price tag. For that savings, they were willing to redo the RV’s interior.

They aren’t sure exactly who was the first one to think of the log cabin conversion, but both the Wemples embraced it wholeheartedly. This was not going to be a matter of a few new throw pillows and some wall art – they wanted the motorhome to look like a real log cabin. They replaced the original flooring with rustic pine vinyl planking, and most of the oak trim with rough-cut cedar. The walls were re-covered with either authentic-looking log wallpaper or a rock wallpaper, completely changing the interior atmosphere. Michael then custom-designed hickory tables for the dinette and the space between the cab seats, which he modified with swivels so they could double as living room seating. Barbara used fringed buckskin to re-cover the window valances and lambskin for the back window, which has side frames made of PVC pipe covered with aspen-bark wallpaper. The couple also used a pinecone wallpaper border to add inserts to the cabinets and replaced the accordion door to the bedroom with a pinecone print fabric curtain.

That was just the beginning. The magic of this conversion is in the details, like the antler drawer handles, the little log shelves in the bedroom and the oval snowshoes that Michael converted into magazine racks. The dinette was reupholstered in a pinecone fabric, and the couple found cabin-themed bedding, towels, placemats, dishes and accents to match. Each year something more is added, from animal pelts to the mountain-scene tapestry, to the nonfiring Winchester 76 rifle replica that is permanently mounted above the dinette. Just before this article went to press, Michael emailed me a photo of his new bathroom lighting fixture, made of – you guessed it – a log.

“This is a work in progress!” he laughs. “I’m always modifying something, or at least thinking about it!” 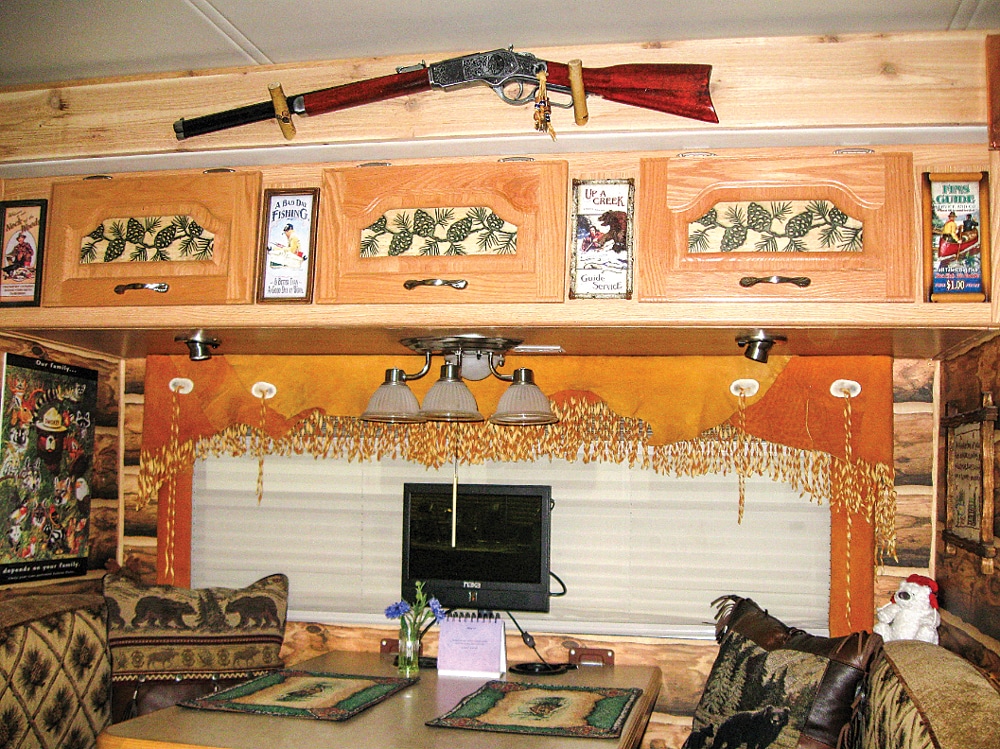 Every corner of this Concord motorhome is outfitted as a mountain getaway. Beneath the nonfiring Winchester rifle, bears adorn the walls (and pillows) of the dinette area.

That included some changes that weren’t necessarily part of the log cabin theme, including replacing all bulbs with LEDs and adding additional 120-volt AC and USB outlets, a 1,000-watt Xantrex inverter and two new 12-volt DC flat-screen TVs. The battery box was modified to fit two Trojan T-105 6-volt batteries as well. Because the couple use their motorhome across all seasons, they also added a Wave Catalytic heater and dedicated 20-amp shorepower cord for electric heater use. In terms of plumbing, Michael replaced all the interior faucets with residential bronze, installed an accumulator tank in the water line and designed a circulating hot-water system so that hot water quickly makes it to the bathroom.

While the interior conversion was no small feat, that isn’t all that the Wemples have changed about this motorhome. Perhaps the most significant additions were the 5 Star Tuning reprogramming kit and Hi-Flow intake, which Michael highly recommends for the Coachmen’s Ford V-10.

“I could tell such a big difference,” he says of his motorhome’s power and performance on steeper inclines after the modifications.

The Wemples also installed new front springs, new Koni shocks, a Roadmaster steering stabilizer and solid extended wheel valve stems with “trucker” valve stem caps. This last modification allows Michael to check all of the tires on the motorhome as well as the couple’s dinghy vehicle, a 1998 Chevrolet Tracker, in less than 90 seconds.

“Not a thing. I just love it the way it is!” Barbara says, adding, “He’s done everything I could possibly think of!”

But Michael, ever the tinkerer, is not so sure. He points out that there is lots of “hidden space” behind panels and under seats that can be redesigned for easy access to storage. He recently uncovered an unused space big enough to hold six rolls of paper towels and eight rolls of toilet paper. And while he is happy with everything they have accomplished thus far, he muses that full-body paint and four-point levelers would be nice to have. He also notes that the Concord doesn’t have any solar “yet.”

While just stepping inside the Wemples’ “log cabin” feels like being on vacation, the Concord has proven to be an escape pod in more ways than one. Last winter the couple used it to snowbird to Arizona for three months to dodge the harsh Montana winter, a trip they hope to repeat in 2018. This summer’s trips include a sapphire mining excursion and an August drive to Idaho for the total eclipse of the sun. Their travel companions are two snowshoe Siamese cats, Bill and Ted, who think traveling is “a most excellent adventure.”

And of course, both Mikey and Barbi appreciate the reaction they get from other RVers. Folks often approach when they see the log wallpaper and faux stained-glass insert on the open door.

“They always say just what you said: ‘I’ve never seen anything like it,’” they both laugh.

No matter where it is parked, this 2005 Coachmen Concord is its own tourist attraction. Its unique conversion is reflective of the way all of us fit our units to ourselves in ways large and small. Feeling at home wherever we travel is the real attraction of the RV lifestyle, and that is what makes this mobile log cabin a true classic ride. 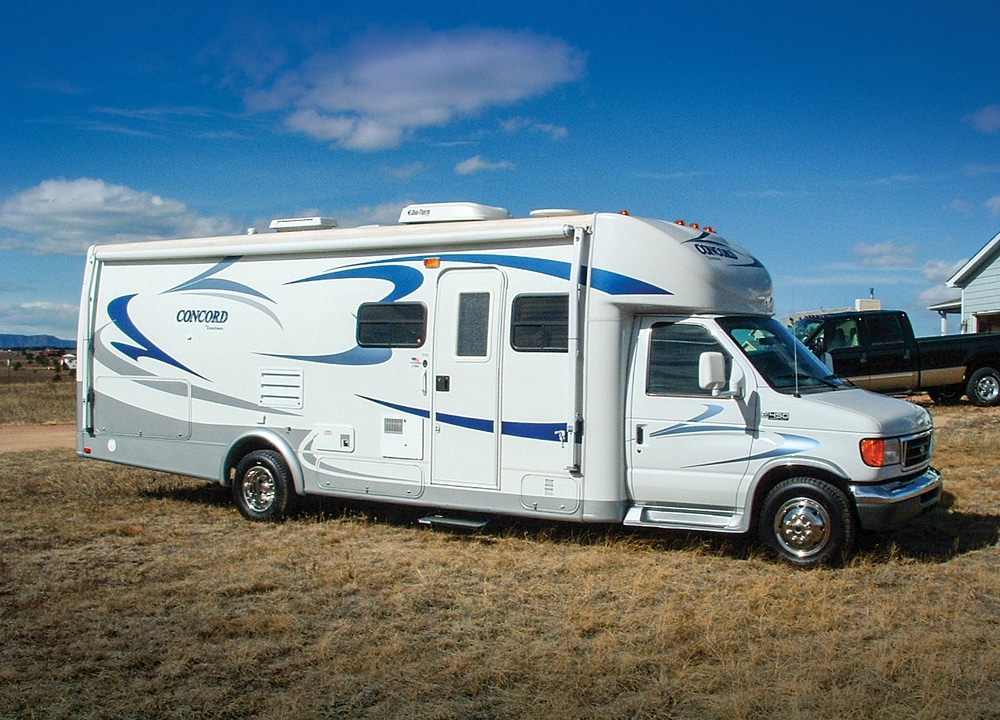 You are not likely to find another Coachmen with the unique attributes of the Wemples’ motorhome, but if you like the layout, size and storage space of the 2005 Concord 275 DS, you can find one in good condition on the used market for about $30,000. You can install a new 5 Star Tuning kit and high-flow performance cold air intake yourself for about $1,000 (http://5startuning.com/product-category/1997-2015-ford-6-8l-rv-class-c/). As for remodeling the motorhome’s interior, this Concord is proof that with some basic DIY skills, the only limit is your imagination (and the vehicle’s weight ratings, of course).