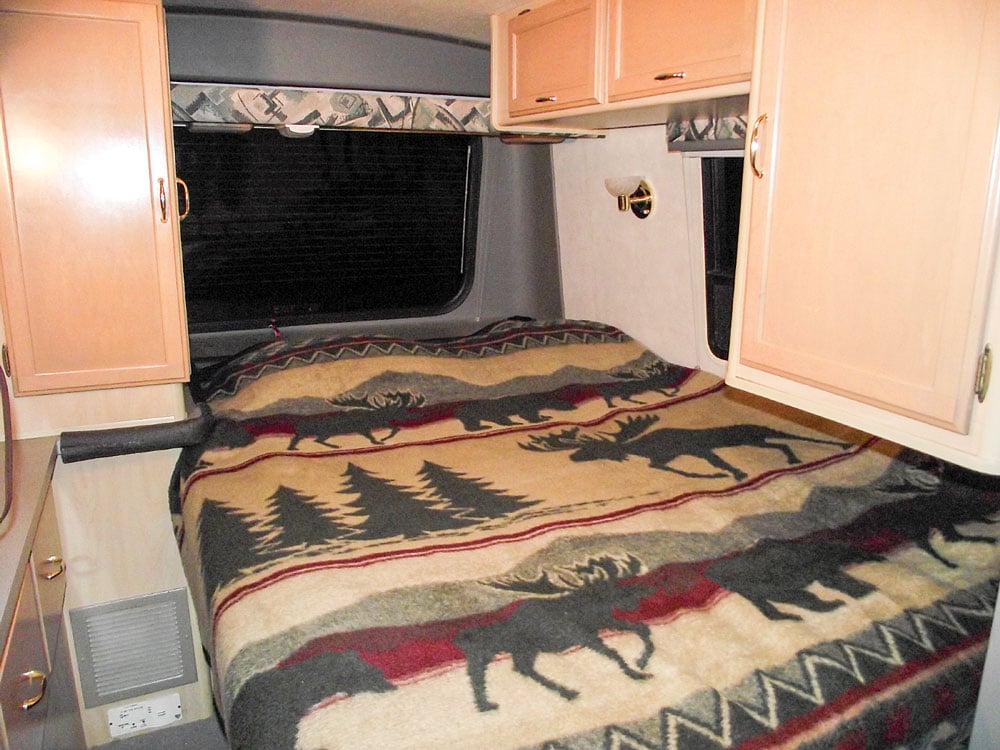 This compact Winnebago is easy to maneuver and represents the motorhome of a lifetime for one happy Colorado couple.

Bigger isn’t always better. You know this if you have ever tried to maneuver a large motorhome through the narrow streets of Key West, Florida, while free-range chickens are crossing the road in front of you. Most of the quaint small towns you’d love to visit, with their art galleries, shops and sidewalk cafÃ©s, were simply not designed to accommodate big rigs. The trade-off of having a Class A, or even a larger Class C, is that you must either take your dinghy along or resign yourself to pedaling 5 miles every time you don’t feel like cooking a meal. Wouldn’t it be great if you could have it all in one vehicle – an RV with the comforts of home that could still do dinner out and maybe even fit in your garage? That sentiment explains the growing popularity of Class B and B-plus motorhomes, and why Alan Rule and Jane Browning are seeing the country in a Winnebago Rialta.

We first met the Colorado husband and wife when we saw their motorhome snuggled in between palmettos at Tomoka State Park near Ormond, Florida. Fascinated by the size of the motorhome and its sleek, clean lines, we were curious about whether a motorhome so small could really be practical for daily living. It was the same question Rule and Browning asked themselves two years ago when they were in the market for a used motorhome.

The couple had traveled for years in camping van conversions, and they liked the flexibility of having a smaller RV. At the same time, there were things they missed, like having a shower onboard, or not having to pull apart the bed every morning. They also had family and friends they wanted to visit on extended vacations, and they wanted their own self-contained place to stay. They decided they needed a motorhome that was big enough to live in comfortably, but was still compact enough to take into town for sightseeing or shopping.

“We started looking at the next phase,” Rule said, and that meant compiling a list of the features they wanted, including a bathroom and a dedicated bed.

They thought this would rule out all van-based motorhomes and had resigned themselves to searching for a larger motorhome when they came across the Winnebago Rialta 22RC, a model that includes a full-size, full-time bed. Though they knew someone with a Rialta, Browning noted that it “never caught our eye before we saw this layout.” After looking at just how many of their wish-list features were packed into the diminutive motorhome, they knew they had found just what they were looking for.

“And it does fit in our garage,” Rule adds with a laugh.

The Rialta is 21 feet 8 inches long but only 8 feet 10 inches tall and 7 feet 4 inches wide, meaning that it can be parked in most standard spaces, leaving its owners free to explore without having to bring along a dinghy vehicle. The size also gives the Rialta a tighter turning radius than most motorhomes, making it drive more like a car than an RV.

“It’s nimble,” said Browning, when asked about the Rialta’s handling.

The Rialta’s low-profile body also resulted in a near-zero drag in wind-tunnel tests during the design phase. With its 140-horsepower Volkswagen V-6 engine and aerodynamic design, Rule also points out that the Rialta gets a solid 21 mpg, equal to many family-sized cars, making it economical.

Fuel efficiency was also a factor in Winnebago’s choice of materials. Built with a welded tubular-aluminum framework, the construction is lightweight and sturdy. The side walls are patented lightweight Thermo-panels with an interlocking joint system, and have proven resistant to the leaks that often plague older motorhomes. The engineers did not just build the Rialta to be light; they also built it to be durable. The unibody and the floor are made of steel for added strength and stability.

In addition to its maneuverability and its structural integrity, price was another factor in the Rialta’s favor. The couple found their 1998 Rialta 22RC on Craigslist in September 2014 for $17,500, and while it did need some immediate work, the interior and the body were in pristine condition. After adding new brakes and repairing the refrigerator, Rule and Browning were ready to travel. 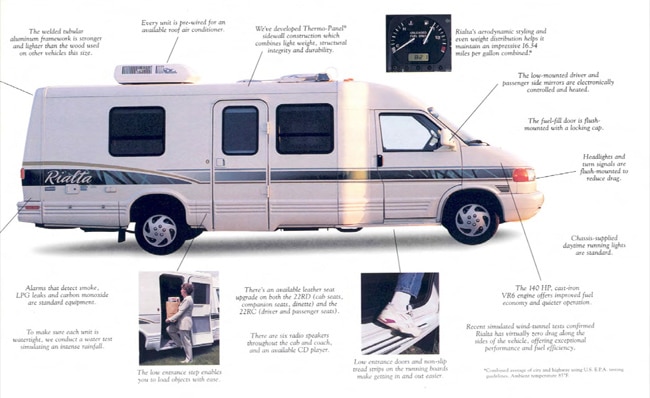 There are obviously some limitations to a motorhome the size of the Rialta, but the designers made optimal use of every available inch. There is ample storage space in the bedroom, including a shirt closet, bedding shelf, wardrobe and under the 54-by-75-inch double bed. The bedroom also offers a handy vanity with drawers.

The roomy driver and passenger seats rotate, and there is also a swivel chair and small built-in pop-up table on the passenger side to be used for dining or as a desk. The driver’s-side galley is compact but complete, with an under-counter refrigerator, a sink, a microwave and a two-burner LP-gas stove. The unit includes all of the traditional RV systems, including a standard rooftop air conditioner, a 17,000-Btu furnace and an optional 3,000-watt Generac AC generator. 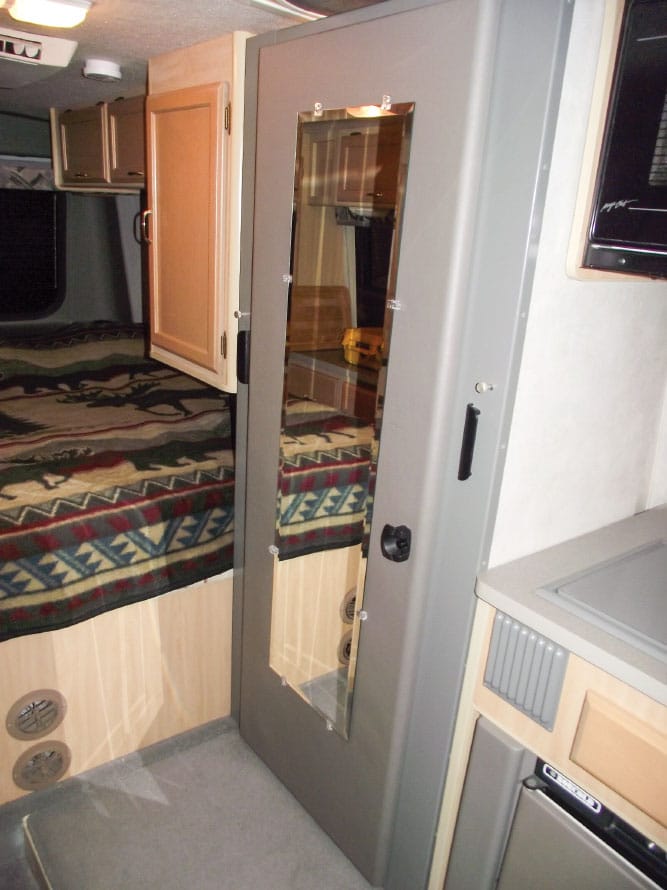 To deploy the bathroom area, the two telescoping walls are pulled out and the door opened to reveal a fold-down sink, lavatory and shower. There’s also a mirrored medicine cabinet with sliding doors in the bathroom.

Perhaps the most innovative feature of the Rialta is the expanding and contracting bathroom. To save space, the motorhome has a Pullman sink that folds down for use, and the side walls of the bathroom slide out to form a shower area. When not in use, they slide back so that the door barely protrudes into the living space.

You might think that all of these features would result in a crowded, cavelike space. Instead, the interior is bright and inviting, with a large 27-by-25-inch skylight near the galley, two windows on each side and a large rear window over the bed. In addition to the many storage spaces in the motorhome, there is also an exterior rear storage compartment, so clutter can be kept to a minimum. The spacious feel is also enhanced by the light-colored wood cabinetry.

Even with all of its benefits, Rule and Browning admit that the Rialta isn’t for everyone. While the maximum headroom is 6 feet 2 inches, that is only in the domed skylight. The rest of the standing headroom is 5 feet 10 inches, fine for this couple but problematic for anyone taller. The floor in front of the doorway is sunken to make it easier to step inside but can present a hazard when walking to the front or rear. Rule remedied this by creating a removable carpeted false floor to fill in the space.

Counterspace is negligible, so the couple added a small fold-up extension next to the galley sink. Both Rule and Browning wish the holding-tank capacity was larger than its current 19 gallons, but they have adjusted by using bathhouse facilities when they stay in campgrounds that do not offer full hookups.

While the Rialta was designed for optimal use of space, some also might find the close quarters and lack of privacy an issue. Not so for Rule and Browning. Browning recently retired from the Alaska Fish and Game Department, and Rule spent more than 30 years in Alaska’s commercial salmon fishery.

“We’re both used to being on boats in small spaces,” Browning explained, “so it doesn’t bother us.”

Rule also pointed out that they did not anticipate ever becoming full-time RVers. They love their home in Howard, Colorado, an old one-room schoolhouse that they bought and remodeled, and they grow a big garden in summer and ski in the winter. Instead, they see themselves spending a few months on the road each spring and fall, then returning to enjoy their home.

“It’s the best of both worlds,” Browning said.

The best of both worlds – a fitting description of this couple’s lifestyle, but also of their motorhome. The Rialta combines the flexibility of an automobile with the comforts of a home, and that’s why it qualifies it to be called a classic ride.